The street that conquered food and drink in the Mother...

The street that conquered food and drink in the Mother City 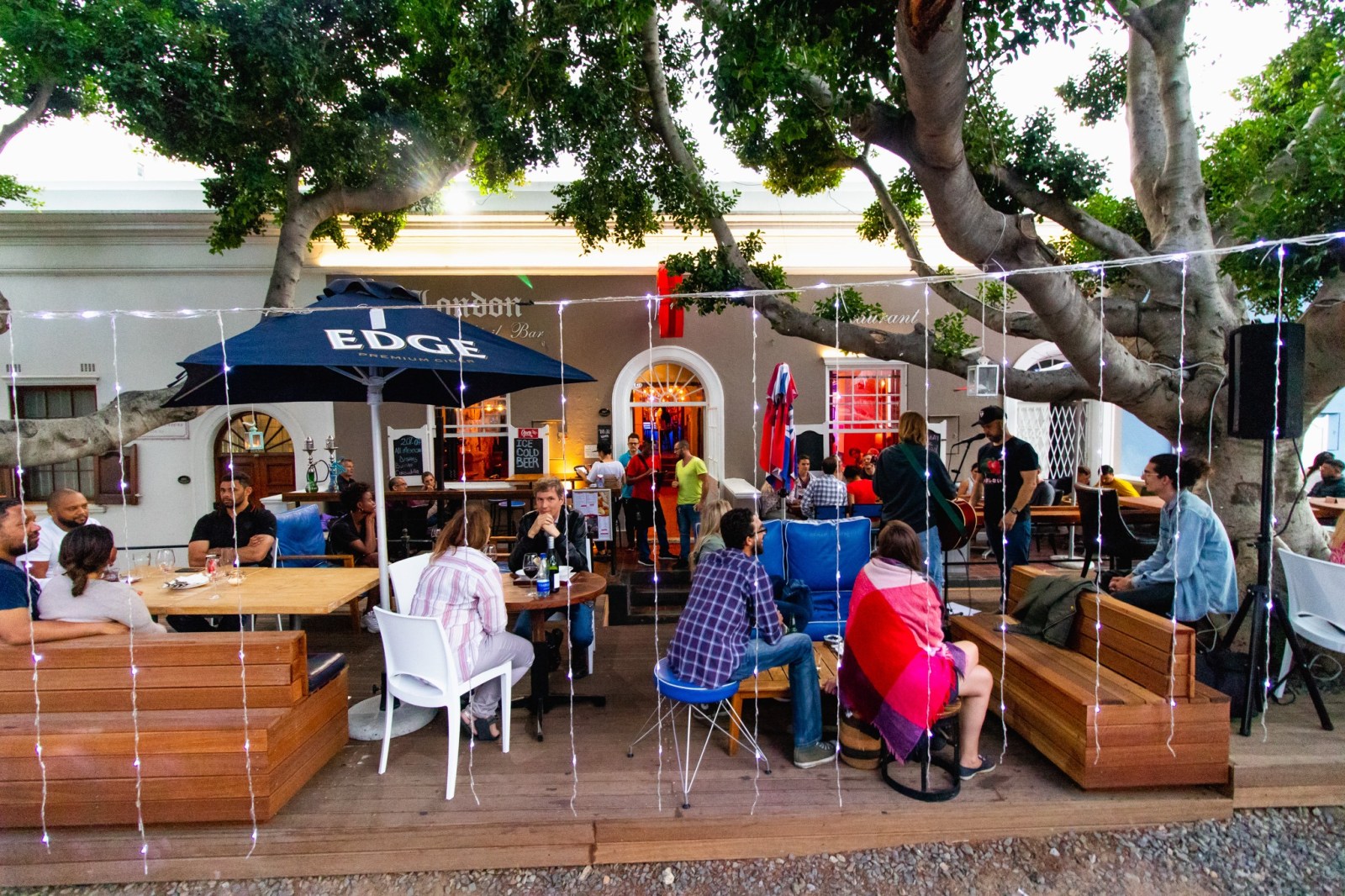 Inside, the décor taps into the famous London Underground, while outside you can sip in the shade. Photo: Supplied

Whenever there’s a story saying a new place has opened in Cape Town’s Bree Street, the question is ‘where on earth did they fit in another one?’.

It’s almost impossible to keep track of all the places to eat and drink in Cape Town city centre’s Bree Street. No sooner have you travelled from one end to the other than you’ll read somewhere another place has opened its doors, adding even more to the already bountiful bouquet of epicurean delights.

To be fair, some have closed (Culture Club, Bacon On Bree come to mind) to make way for the new, but even so… a comprehensive list today could well be out of date by next week. There are, however, some stalwart favourites that we hope will last forever – like La Tête, which is at the bottom end (harbour as opposed to mountain). Here, Giles Edwards embraces a nose-to-tail philosophy, strongly linked with sustainability. You’d be forgiven for instantly thinking meat and animal products, but these days there are far more vegetable dishes on the ever-changing menu than before, although you will still find items like brains on toast (yep, just like that) and lamb heart with peas and mint.

Descriptions are straightforward. For example: “Turnips”. Edwards asked if I had any questions. “Well, yes,” I said. “What are ‘turnips’?” He looked at me as if I was simple. “Of course I know what turnips are,” I clarified, “but what is the dish?”

Turns out, it’s Edwards’s take on the Chinese dim sum dish, along with a few other elements, all of turnip.

This was an expansion of what the menu said, but some other items are just as they are stated. The asparagus and hot butter, for example. That’s almost all it was, plus a wedge of lemon – uncomplicated and so lovely. My friend had artichokes with broad beans, Kalamata olives and Karoo crumble (cheese) to start. We drank Topography Chenin Blanc 2018 from the Swartland, which was so excellent, we finished the bottle and ordered more by the glass.

My main course was salt hake, little gem and aioli – fish, lettuce, mayo – and my friend ordered bream with mussels and samphire, which almost won the day. Until the madeleines…

These can be had by the half dozen or dozen and are made to order. We didn’t actually ask for them but they were sent out anyway, warm from the oven. Perfectly golden, a thin crisp crust, and heavenly buttery softness inside…we looked at them longingly for a moment before saying “Okay, just one. It would be rude not to, right?”

At this point, having outstayed our late lunch well into the staff setting up for dinner service, we should probably gone home. But no. We walked a little way up Bree Street (towards the mountain) until we veered into VIXI Social House, on the corner of Strand Street. It’s an accurate way to describe it because there is a bar area and a restaurant area, serving healthy breakfast vibes from stupid o’clock in the morning to grills, pizzas and pastas throughout the rest of the day and into the night. The bar, of course, has a lot of alcohol.

We ordered another nice bottle of Chenin which we really didn’t need, and no, I don’t remember what it was. The conversation went like this: “We’ve just had fabulous Chenin so let’s stick with that and splash out on a bottle of this one.”

The DJ loved us, of course, and we merrily made friends with someone also named Bianca, and Roy – this I remember, and that there was tequila. Great fun. We yelled for Uber and went to yet another place not in Bree Street, thus missing another excellent opportunity to go home.

That’s where this particular tale ends. On a separate occasion, we went to Station On Bree, which is at the mountain end of the road, where you’ll find a thick cluster of eateries in a very small space. These include SeaBreeze, Orphanage, Sotano On Bree, Jason Bakery, Arcade, and several more.

Station On Bree, celebrating its third birthday at the moment, adopts a London Underground interior theme and has an extensive menu dedicated almost exclusively to carb-heavy dishes: burgers, nachos, fries, lots of battered and crumbed stuff, things in buns, and bread or pita on the side of everything else. I found two things to eat, a salad and stuffed calamari tubes that were delicious but… floured.

Besides the beer on tap, wine, and cocktails, there is an impressive gin menu – about 120 different ones, local and imported – as well as a selection of tonics, and loads of garnishes to help you create your perfect G&T. Which is lovely if you know all the gins and what complements them. You can find out more at the Gin Pop-Up Bar at the Upper Bree Street Market. The 2019/2020 season of these popular First Thursdays events opens on November 7, 2019, from 6pm till late, very late. They’ll happen monthly until April 2, 2020.

First Thursdays in Bree Street is one big fat party, and this one will have arts and crafts, food trucks, a Shisha Lounge where you can unwind with a traditional (giant) hookah (being brought in specially for this event), and a DJ playing in the street from 10pm till midnight. And you don’t even have to go home then! The festivities carry on inside after that.

To think, this all began with art galleries staying open a bit later.

Meanwhile, at the Waterfront…

It’s been many things in its time, from Gordon Ramsay’s Maze to Reuben’s (as in Riffel). Now, that massive triple volume restaurant space at One&Only Cape Town is rebranded and relaunched as Ochre. The tagline is “A celebration of local flavours and heritage”.

Resort executive chef Chris Mare has created a menu inspired by local cuisine, adding his own interpretation to favourites like bobotie and West Coast mussels. For local diners this means a nuance of “tuisgemaakde” nostalgia; and for visitors an exploration of South Africa on a plate.

Mains include a pulled lamb bobotie like you’ve never seen it before with short crust pastry, sweet potato and banana puree, brandied raisins and apricot chutney; Pens & Pootjies (tripe and trotters) – braised pork belly, trotter skilpadjies, marogo, pampoen pofferties and Malay curry sauce; or diners can choose to share one of the house specialities such as a 1kg lamb saddle or beef ribeye.

The wine list is curated by award-winning head sommelier, Luvo Ntezo, who is quite possibly the most charming gentleman I have the pleasure of knowing, and possessed of an eloquently poetic turn of phrase which turns every wine description into a love song. They say diners have the opportunity to engage with one of the resort sommeliers, who is able to assist them in navigating the choices available, and sharing wine insights and stories, but I say give me Ntezo or give me nothing. DM