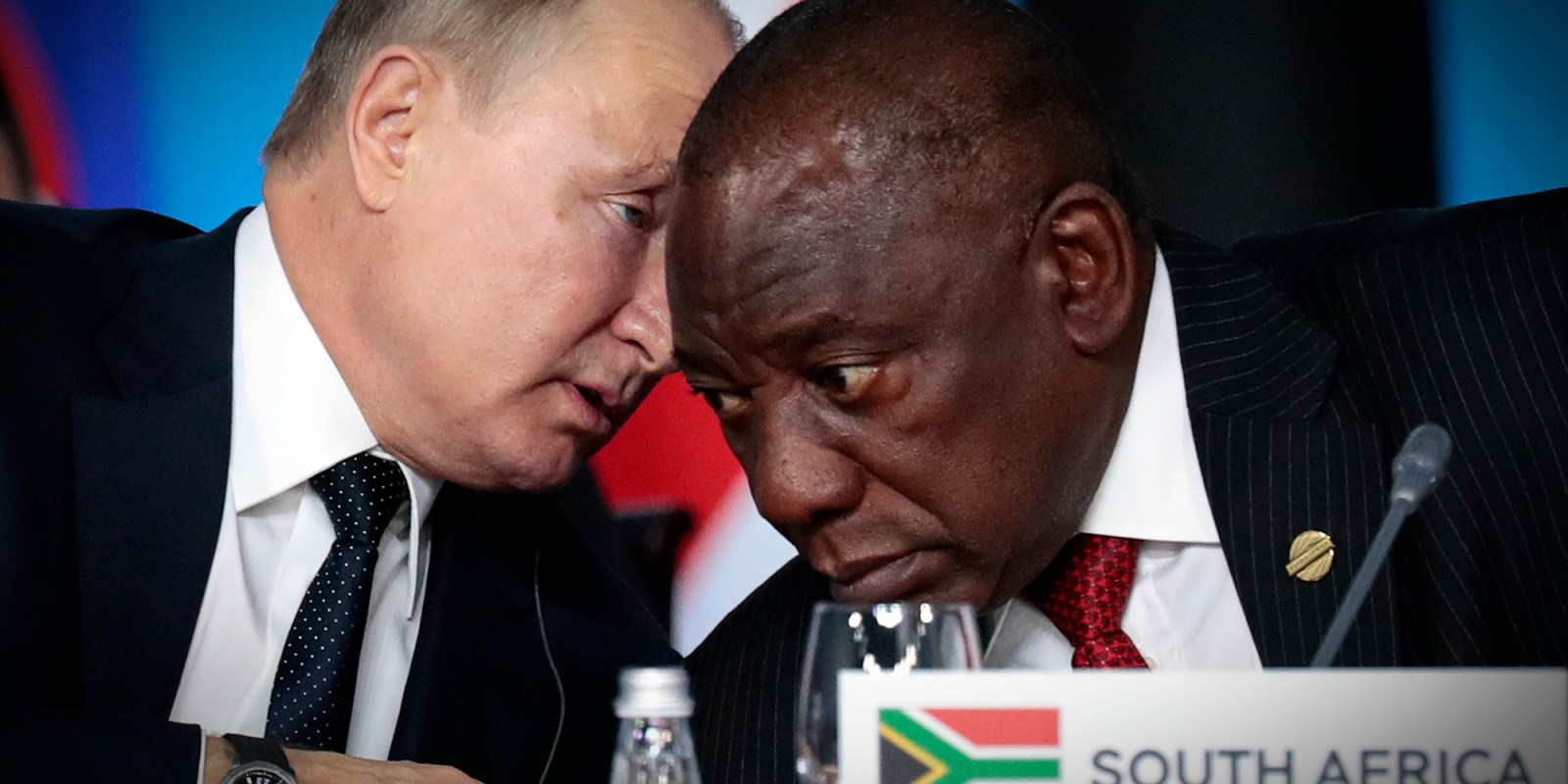 ‘I said we are not about to embark on a nuclear power project we cannot afford.’

Russian President Vladimir Putin once again, this week, brought up that awkward question of whether South Africa was now ready to buy a very expensive fleet of nuclear power plants from his country.

And President Cyril Ramaphosa once again politely informed him that no, South Africa still could not afford it. And Putin once again accepted the explanation. But clearly the Russian president doesn’t miss an opportunity to make a pitch.

Ramaphosa met Putin for a government-to-government meeting on the margins of the first Russia-Africa summit in this Black Sea port this week. The summit and a parallel economic forum closed on Thursday with an agreement by both sides to institutionalise the engagement as the Russia-Africa Dialogue Forum to be held every three years. They also agreed the next one would be in Africa.

Ramaphosa told South African journalists after the summit that the big nuclear deal – which his predecessor Jacob Zuma was pushing hard for – had once again come up in their meeting.

“We have met a few times and each time the nuclear issue comes up,” he said.

He told Putin that nuclear energy was part of South Africa’s energy “repertoire” and that at the right time and the right price and at the right pace, the country would consider it.

“I said we are not about to embark on a nuclear power project we cannot afford.” He said Putin was not rattled by this information.

“We have a mature relationship which enables us to deal with things openly,” Ramaphosa explained.

He was full of praise for the summit, saying it had been “very, very meaningful, more meaningful than I had expected. This was particularly so because of the extensive engagement between the businesses of Russia and Africa, particularly in the mining, oil and gas extraction and ICT [information and communication technology] sectors.

“I think it will now move from contact to contract,” he said. “There should be a number of deals that ensue,” he added, though no large ones were in immediate prospect.

He noted that several Russian companies were already invested in South Africa and some of these investments needed to be upgraded. He specified the company Renova, which is mining manganese in the Kalahari.

Earlier, Viktor Radko, CEO of Renova’s SA’s investment, United Manganese of Kalahari, said Renova was probably the largest Russian investor in SA with project investments into manganese productions projected to reach half a billion US dollars this year.

Ramaphosa said Russian companies were also helping to keep the Koeberg nuclear power plant going and maintaining South African railways. These were not substantial deals, but he said South Africa would like to expand on these by taking advantage of Russia’s specialised skills in areas such as agriculture, food and ICT.

He noted that quite a few South African companies were already doing business in Russia and so it had also been useful to showcase those.

On the political side, it had been good that about 47 African heads of state or government had attended the summit. He praised Russia for continuing its support of many African countries, including South Africa, that had started with its backing of liberation struggles against colonialism and apartheid and had now formed a “second wave” of economic and political support.

He said he was impressed that Russia had not made any demands on African countries in exchange for its past support for the continent:

“It was not used as a lever. It was not like, ‘you owe us so you must do the following.’”

He added that Putin had been very emphatic on treating African countries as equals and letting Africans take the lead in the relationship. In this regard, he said Putin had immediately accepted South Africa’s suggestion that the next summit in three years time, should be in Africa, not Russia, so the African leaders didn’t have to travel such a distance. Putin announced this decision at a press conference at the end, saying the engagement would be formalised as the “Russia-Africa Dialogue Forum”.

Ramaphosa said he asked Putin why he had not done this before and Putin told him Russia had not been ready for it before.

Several commentators have remarked on the simultaneous arrival of a fleet of Russian Air Force aircraft in South Africa for joint military exercises with the SA Air Force just as the summit was taking place in Sochi. Ramaphosa was asked if the two countries were trying to send a message with this gesture.

He dismissed this suggestion, saying the arrival of the Russian planes as he was leaving for the summit was “fortuitous”. The South African and Russian militaries had been dealing with each other for a long time, including air force and navy exchanges and joint exercises and training.

He added that although two of the aircraft were bombers which could deliver nuclear weapons, they had not been armed when they visited South Africa and were merely being tested.

“It’s not a threat. We shouldn’t worry about it.”

More broadly, he dismissed criticism from some quarters that Russia was unduly focusing its support to Africa in the military area. Arms were prominent among the Russian products exhibited at the economic forum which preceded the summit, including a MiG fighter jet on display in front of the summit venue.

“For most of us, it’s a sovereignty issue. We shouldn’t sell our sovereignty for a few pieces of equipment.”

Returning to the nuclear issue, the summit was noteworthy for the three nuclear cooperation agreements that Russia signed with Ethiopia, Rwanda and Zambia.

Alexey Likhachev, director-general of the Russian state atomic energy corporation Rosatom, told journalists that the corporation now had some form of a nuclear agreement with about 18 African countries, including agreements to construct centres for nuclear science and technology but also to consider building nuclear power plants.

Ramaphosa was asked if he was concerned that some of these African countries were taking the risk of getting into unaffordable debt in the future by committing themselves to nuclear power.

He said he did not know the details of all these agreements and so could not comment on whether or not they were affordable.

“We would only look at ourselves. They will look at what they can afford,” he added. DM