Paying car guards with credit cards: The move to a cashless society 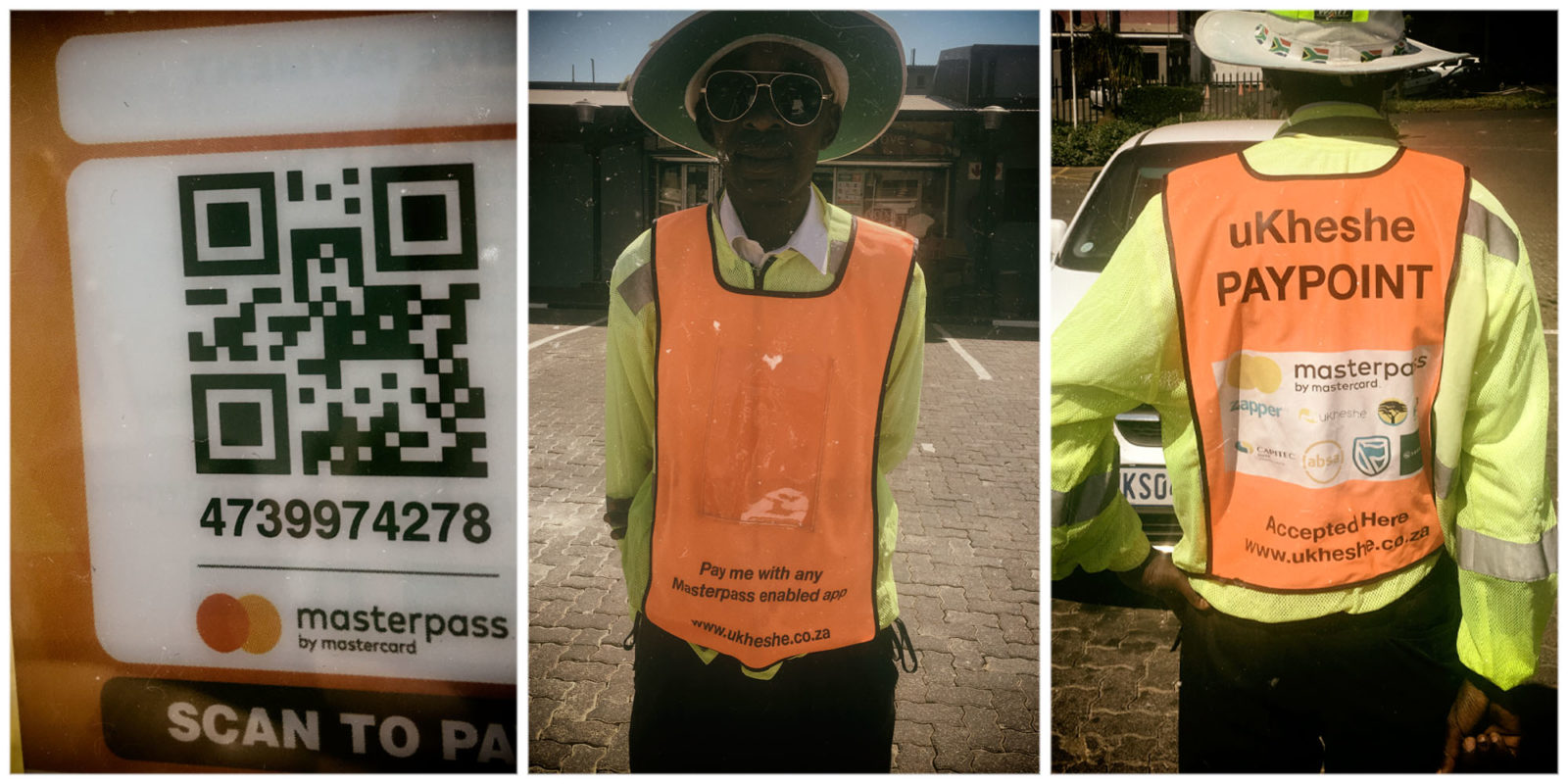 South Africa has been struggling to find a model for digital micro-payments that works. uKheshe might have found an app that works, not by copying M-Pesa but by being different from it – as car guards are discovering.

Shielded from the blinding morning sun, Sellio Akabu, a car guard from the Democratic Republic of Congo wearing aviator sunglasses and a large hat, surveys the parking lot, in search of customers in Linden, a suburb in northern Johannesburg.

His orange visibility vest bears the word “uKheshe Paypoint” and a small card tucked in the front allows motorists to scan the QR code and tip him for looking after their car.

“The customer just scans the app and pays me by scanning. The money just comes to me by phone and I can go get the money by Pick n Pay,” the 49-year-old Akabu says.

He started using the uKheshe micro-payments app in March 2019 and he says he’s seen his turnover soar since then.

“The customers were saying they don’t have money… now they use the card. It depends what they give, sometimes they give R5, R10 or R20,” Akabu says.

Akabu is one of the 275,000 people who have taken up the uKheshe (isiZulu for cash) micropayment platform since it registered as a financial services provider in 2018.

One of the co-founders, Mike Smits, said the four partners decided to establish uKheshe out of their software company, Jini Guru, and tailor a payment solution for people without bank accounts and those in the lower-income market.

“Many people don’t carry cash any more for obvious reasons, or if you’re sitting in traffic and think you’d love to be able to buy a Coke [from a street vendor] but don’t have cash,” Smits told Business Maverick.

He explains that anyone can accept an uKheshe payment by buying a card for R20 at a money counter at Pick n Pay where their ID is verified on the spot. They do not require a smartphone to accept money, but a mobile phone that is USSD (unstructured supplementary service data) enabled.

The cost of the service is a R5 monthly admin fee, and a withdrawal from any Pick n Pay counter is also R5. People using the service require a more scaled-up cellphone, either using mobile payment platforms SnapScan, Zapper or a mobile banking app enabled with a QR code.

The uKheshe app is one example of the changing landscape of the financial services industry in South Africa, long dominated by the Big Four banks. According to a 2017 report by PricewaterhouseCoopers, the sector is rapidly evolving toward “being a marketplace without boundaries”.

The new digital entrants such as Discovery and Thyme banks have seen the established giants’ products increasingly being pushed towards digital solutions.

Most people in South Africa have access to financial services – 90% according to data by FinMark Trust in 2018 (up from 68% in 2010) – and 80% are banked. However, many of these bank accounts are inactive and 63% of people make use of informal financial services such as unregistered money lenders.

The World Bank highlights that having a transactional bank account is the first step toward broader financial inclusion for individuals and entrepreneurs as it allows people to store money, and send and receive payments.

The head of transformation and financial inclusion at the Banking Association South Africa, Khulekani Mathe, said an increasing number of people are accessing financial products. But many recipients of social grants or transfers from their family members immediately withdraw the entire sum, which either points to the fact that they do not trust the banking system or they live in rural areas, far from ATMs and other banking services.

Mathe added that technology is a “very, very big part of the solution” in increasing financial inclusion.

Smits, a chartered accountant, while his three partners are software engineers, said the biggest challenge in running uKheshe had been around regulatory issues and they had been working closely with the South African Reserve Bank in the tightly legislated policy arena.

Their goal is to reach a million users by the end of 2020, pointing to people using uKheshe to pay their domestic workers and gardeners as well as tipping car guards or giving money to beggars. There will always be a place for cash, Smits says, but the move is increasingly towards a cashless society.

Another sector using the micro-payments system is street traders and hawkers. Smits points out the difficulties in registering for a speed point facility as a small business, with banks requiring a long application form, proof of residence and financial statements. Even Yoco, a card transaction platform tailored for small businesses, requires smartphone technology and about R800 to buy the facility.

“A typical user of uKheshe may or may not have a smartphone but they are likely not to have airtime or data and their preferred mode of communications is SMS,” Smits said.

Informal traders transacting with the platform use it as a savings vehicle as well, to avoid carrying large amounts of cash, said Smits.

He added that uKheshe is different from the wildly popular mobile payment system in Kenya, M-Pesa, which failed in South Africa.

For Akabu, who has doubled his take-home earnings to R250 on a busy day since he started using uKheshe, it’s worth the R25 commute from central Johannesburg to a Linden car park where the excuse, “I don’t have small change on me” just doesn’t cut it any more. BM