Life after Zondo: Civil society fights back against State Capture 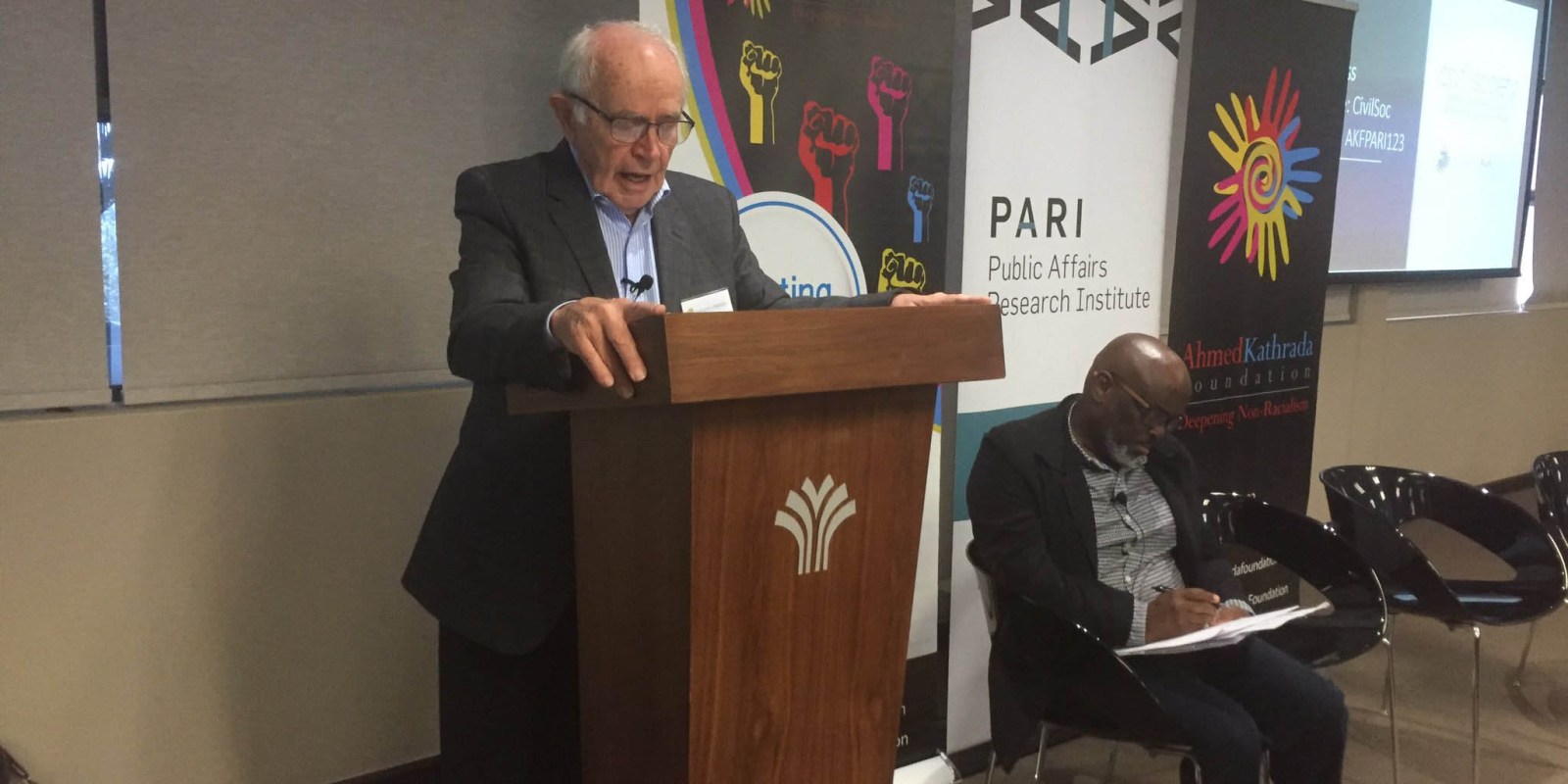 On Wednesday 23 October, the Ahmed Kathrada Foundation and the Public Affairs Research Institute hosted a civil society conference on life after the Zondo commission. A large number of representatives attended to plot the way forward.

The Ahmed Kathrada Foundation and the Public Affairs Research Institute (PARI) civil society conference title was a mouthful — Defeating State Capture and Rebuilding the State. Packed to the rafters, the gathering in Auckland Park, Johannesburg kicked off with retired Constitutional Court Justice Johann Kriegler, who has had a prolific legal and human rights career, as the keynote speaker.

He immediately energised the room by stating that the conference was not conceived of in an emotional and political vacuum and that it was now time for action, not talk. He was quite candid in acknowledging that the past 10 years had been a collective failure of government, Parliament and the judiciary because all three arms of the state had been aware of what was going on. He said this showed that only active citizens can safeguard the country and that people must never leave their fate in the hands of state institutions, as this is what had brought us to this moment.

Justice Kriegler was also at pains to emphasise that State Capture was not just Jacob Zuma and the Guptas — it found its mainstay in the most mundane of ways such as corrupt officials in municipalities and other organs of state. He made the example of municipal officials who knowingly and intentionally put money into VBS bank only for it to be siphoned off by the corrupt, leaving poor people even poorer. Justice Kriegler said the erosion of state institutions also came at the cost of now not trusting the integrity of those you work with, as well as a loss of professional confidence.
He closed his address by sounding three warnings:

Sarah Smit, a journalist covering the Zondo commission, shared some observations on the commission, highlighting that it was not only corruption that motivated those implicated in State Capture, but often it was about survival and the very real fear of being out of a job.

On a panel with Deputy Justice Minister John Jeffery, South African Local Government Association CEO Xolile George suggested that the auditor-general also look at recruitment processes. He said there was often a correlation between irregular spending and incorrect people being hired in key positions. He also suggested that there be a regulatory body established to register municipal officials, which would guide professional and ethical standards to be adhered to.

In the afternoon, delegates broke off into various groups to workshop and share experiences on public advocacy, parliamentary oversight and lawfare. The goal was to give feedback to a plenary session on ideas about possible civil society interventions in the fight against State Capture.

Professor Mark Swilling, whose research focuses primarily on “societal transitions”, tracked South Africa’s outlook from 1994 where citizens optimistically thought that the state mirrored our democratic Constitution, and yet where we find ourselves now proves that it actually doesn’t. He outlined how we viewed the behavioural norms of the first generation of civil servants as revolutionary and zealous, versus the old guard. Swilling said the current civil servant generation was eyed with suspicion and there was a need for systems to be put in place in order to penalise their potential wrongdoing and incentivise them against corruption. He concluded by reminding the gathering:

“We are in a fight against the fight back!”

One thing the discussions and workshopping made clear on the pervasive nature of State Capture was that those who propelled it seemed quite brazen in their actions and worried about the consequences later, as these often came much later, if at all. Throughout the day a number of delegates asked what normal South Africans could do to curb this.

It was Black Sash national director Lynette Maart who contextualised citizen action quite succinctly, referring to the Sassa and CPS furore over grant payouts. Maart said that at meetings with the minister and other officials, they invited grantees directly impacted by the Sassa payout irregularities to the meetings. These people would tell their own stories, immediately holding the officials accountable as they could not be ignored, eye to eye. This had the effect of humanising the victims and sped up the process of resolution.

What Maart and all the other speakers were alluding to at the conference is that as hard as it is and as insurmountable as it seems, starting at where you are and taking any small action is what leads to groundswell moments. MC