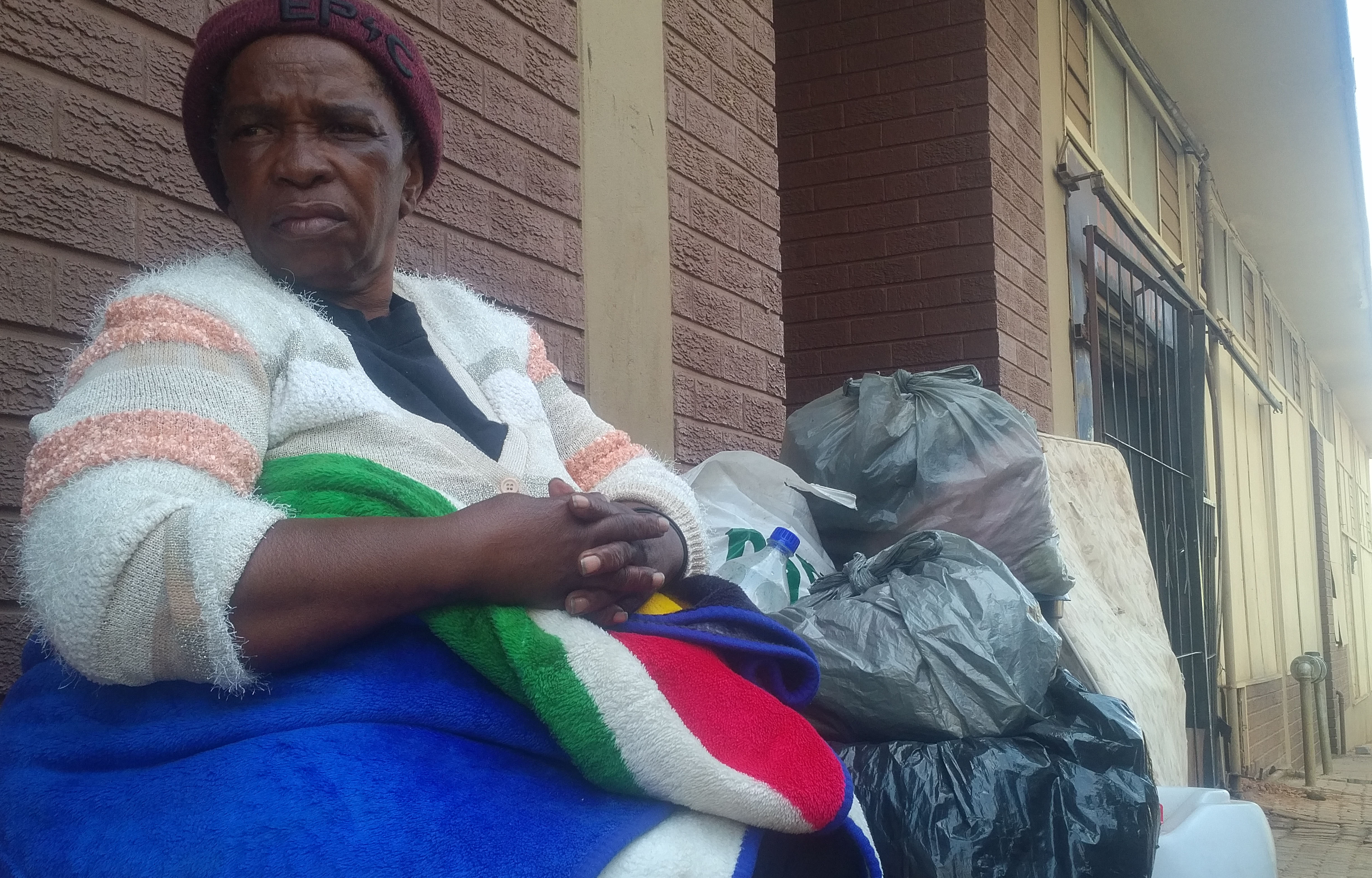 Thembani Maseko guards her belongings after she was evicted from the Jeppestown flat she and nine dependents were evicted from on Tuesday. Photo: Bheki Simelane

Several families in Jeppestown, Johannesburg, spent Tuesday night on the street after they were evicted from a flat they had been staying in for years. The families had the sky as their shelter after they were kicked out and their flat cordoned off with sheet metal.

Almost two months after they were terrorised by a crowd that looted stores and assaulted residents, some Jeppestown residents are being evicted from flats they have called home for years.

Speaking to Daily Maverick, a grandmother whose family of nine was thrown on to the street on Tuesday, 22 October 2019, said the worst part is that they were never warned about the impending evictions.

Thembani Maseko is head of the Maseko family of nine. The family comprises Maseko’s niece and eight grandchildren. Maseko sells food to sustain her family.

She is not sure how old she is – she calculates her age against the day when she started earning her pension grant and says she must be 63. All she remembers about her arrival in Johannesburg from Mpumalanga is that it was a very long time ago.

“At that time I was called Sister Thembi because I was still young.”

Maseko said she had never received any notice about the eviction, except for a few hours beforehand when a security guard warned residents of the impending action.

She spent Tuesday night on the street guarding her family’s belongings. She arranged with neighbours to take in all her eight grandchildren and her niece. She said securing her family was most important to her. She sat on the street with her possessions until Wednesday morning when she was promised refuge at a nearby flat.

Maseko said that this year she had purchased a stand in Orange Farm and built a shack. However, she said she could not afford to take her grandchildren with her because Orange Farm is far from the Johannesburg schools where they are enrolled.

“I will never vote again – voting to sleep outside. It’s hard. Yes, I get my pension money every month, but what can that money do, because I have eight grandchildren… It’s certainly not enough.

“I’m not the least worried. This is Johannesburg – sleeping on the streets is not something that is frowned upon here. I have slept in the streets many times before in the many years I have been in Johannesburg,” Maseko said when a neighbour asked her where she had spent Tuesday night.

However, what Maseko didn’t know is that residents of the flat where she was promised refuge could also be evicted at any time.

While the reason for the evictions remained unclear, a security guard in the area said the flats were being expropriated as part of improvements under way in Jeppestown and Maboneng.

“They were given five months to find alternative accommodation but they chose to remain in the building,” claimed the security guard.

On Thurday, Maseko, who was in court with her former flatmates, told Daily Maverick that a lawyer was helping them find alternative accommodation.

She said her nine-year-old grandson “arrived from school on Tuesday and saw me arguing with the police and people who came to evict us. He kept asking where we would sleep. He is not well, he has been crying non-stop.”

While it’s not clear how many families were affected by Tuesday’s evictions, there are 14 flats in the block.

A spokesperson for Mafadi Properties said they manage buildings in Jeppestown but the building where Maseko used to stay was not yet under the company’s management because it has not yet been developed.

“It wasn’t Mafadi who carried out the evictions, but it was definitely one of our clients. The landlord bought the place some time last year, according to what we have gathered.”

He added that as far as the company was aware, there were two court orders authorising the evictions, with the latest one having been carried out on Tuesday.

Nthatise Madingoane spokesperson for the City of Johannesburg said in an email: “I confirm that the City is aware of the evictions referred to. However, it has to be mentioned that these were private evictions where the City is not involved. The private entities concerned never even bothered to formally notify the City of their action.” DM