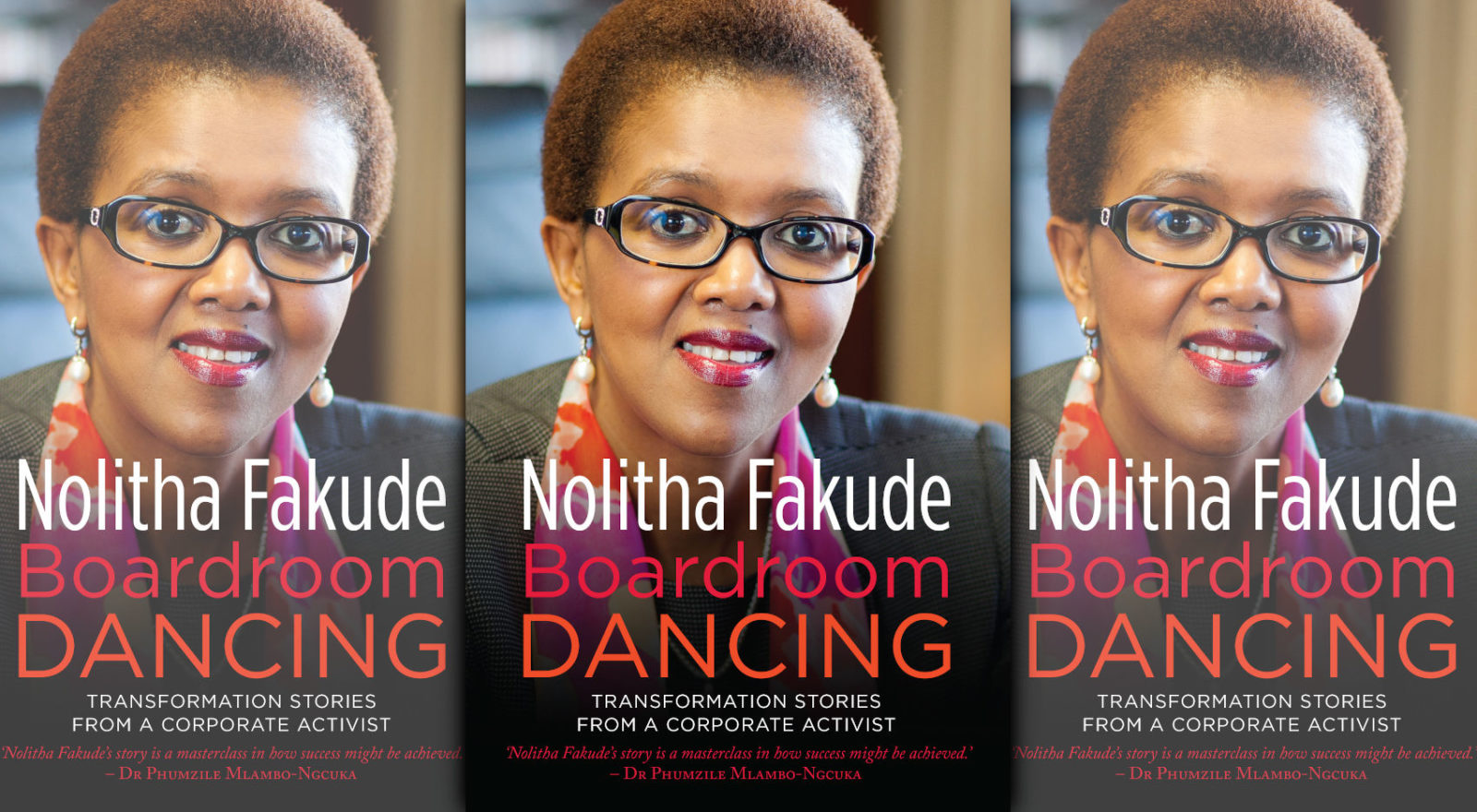 In Boardroom Dancing, Nolitha Fakude tells the story of her life – from childhood as a shopkeeper’s daughter in the Eastern Cape to senior executive at blue-chip companies such as Woolworths, Nedbank and Sasol. Boardroom Dancing is a personal journey as well as a lesson for South Africans committed to the transformation of boardrooms and the economy.

“My hope in writing this memoir… is that it will invoke in you, the reader, the urge to want to have a much more open and deeper discussion about what our shared future should look like and what the common values of South Africa should be, and how best to move forward as a country towards defining a peaceful co-existence among all South Africans of all races.” – Nolitha Fakude

In this excerpt, Fakude recalls her part in one of the more bizarre episodes of South Africa’s recent past – the story of Happy Sindane – and how it influenced her thinking on South Africans’ shared humanity.

It was a regular evening in early 2004 and I was busy preparing for a meeting the next day, enjoying the second wind I usually get in the stillness that comes after dinner, when my phone rang. It was my Aunt Zet.

“Litha, do you have the TV on?” she said, her voice full of excitement. “What’s this about?” I asked, searching for the remote and switching on the TV.

Images of a down-and-out white man in his 20s gave way to those of the clapboard façade of my family’s general store back in Cenyu, the small village where I grew up in the Eastern Cape. The newscaster’s voice explained that the man had shown up at a police station in Mpumulanga province, claiming that a “coloured” family had kidnapped him and that he was seeking his white parents.

“It’s your child – Ebbie,” Aunt Zet said, as an image of the blue-eyed boy whom we had called “Happy” filled the screen.

I had no idea how Happy had ended up on TV like this. Shocking as it was, his sad story was all too typical in the way it illustrated the brokenness at the root of our country’s history – a profound chasm of structural racism and inequality that I had increasingly focused my professional life on helping to fill.

With a population of about 350, the small village of my youth was the kind of place where everyone knew each other. My family owned the village store where people came to communicate with family members working as migrant labour elsewhere, and I often helped read and write letters or put through phone calls from the shop’s phone. As a result, I often knew more than I should have about people’s personal lives and struggles.

A domestic worker in Joburg, Ebbie’s mother had brought him to Cenyu when I was about eight. Still a small baby, Ebbie was left with his pensioner grandmother so his mother could return to her job in the city. It soon became obvious that Ebbie was a mixed-race child – the result of an “illegal union”, according to South Africa’s anti-miscegenation laws at the time – and as he grew, Ebbie’s blue eyes and fair skin made him the target of taunts and bullying.

From my family’s shop, which in many ways was a centre of the community, it was not unusual for us to hear Ebbie being teased (the kids in the village calling him “amper baas”, Afrikaans for “almost-white boss”) or worse. Often, we would find him crying after having been beaten by other boys who resented the idea that this child would someday grow into a white man. As his grandmother spent most of her time drinking homebrewed beer, Ebbie not only lacked protection from the bullying, he also was not well looked after.

I was away at boarding school by the time most of this was happening, but I knew my mother gave Ebbie food to eat when he came around, and let him ride with her in the bakkie when she went to run errands in town, as he didn’t seem to be in school. Whenever I was home and saw Ebbie hanging around the shop, I would engage with him and look after him, and people used to jokingly refer to him as my child.

During my last year at boarding school when I was seventeen, I was home helping out in the shop when there was a big commotion outside and I heard people screaming, “Ebbie, Ebbie!” I found Ebbie outside on the ground, unconscious and foaming at the mouth. Taking him to the hospital, I discovered he had passed out from hunger, and had apparently been eating grass. Although many people in Cenyu could have been called poor, most had vegetable gardens and there was an unspoken rule that as black people we helped one another. But Ebbie was not seen as black.

A couple of months later, on the phone with my mom, she informed me that a social worker had taken Ebbie from his grandmother and put him into foster care. His stay at hospital had obviously alerted people to this “embarrassment” of a “white” child living in the black village. We later heard that a coloured family in town had adopted him, and figured that was the end of the story.

But now, 20 years later, here was Ebbie on TV, claiming to have been kidnapped. I can only assume that it was the trauma of his childhood that caused him to distort his history and reality so completely. The headlines died as soon as Ebbie got new benefactors in Johannesburg, people who did not think that he was “just crazy”. Sadly, about ten years later I heard that he had been killed in a shebeen fight.

Despite people teasingly calling him my child, I didn’t actually know Ebbie well at all. But the unfairness of his treatment in our community left a mark on me. Growing up in our shop, absorbing people’s stories and hardships, I developed empathy and a desire to understand people. I hated knowing that people were treated badly because they were different, and I often thought about all the paths Ebbie’s life could have taken had he simply been born with a different colour skin.

The brokenness of the man who started out as a child who had done nothing worse than exist as the wrong colour in the wrong place at the wrong time served as yet another example of the waste and suffering that results from viewing our fellow human beings as others to exclude rather than potential to develop. Over the years, a question that has come to guide my life is how we can move as a society from viewing the differences as a weakness to viewing them as positive in order to benefit everyone. ML

Corporate activist and businesswoman Nolitha Fakude has spent her 29-year career focusing on the development of women and marginalised communities in the workplace and society. She was managing director and then president of the Black Management Forum (BMF) from 2003 to 2006. From 1 September 2019, she assumed an executive position as group director and chairman of Anglo American’s management board. Boardroom Dancing: Transformation Stories from a Corporate Activist is published by Pan Macmillan (R290). Visit The Reading List for SA book news – including excerpts! – daily.