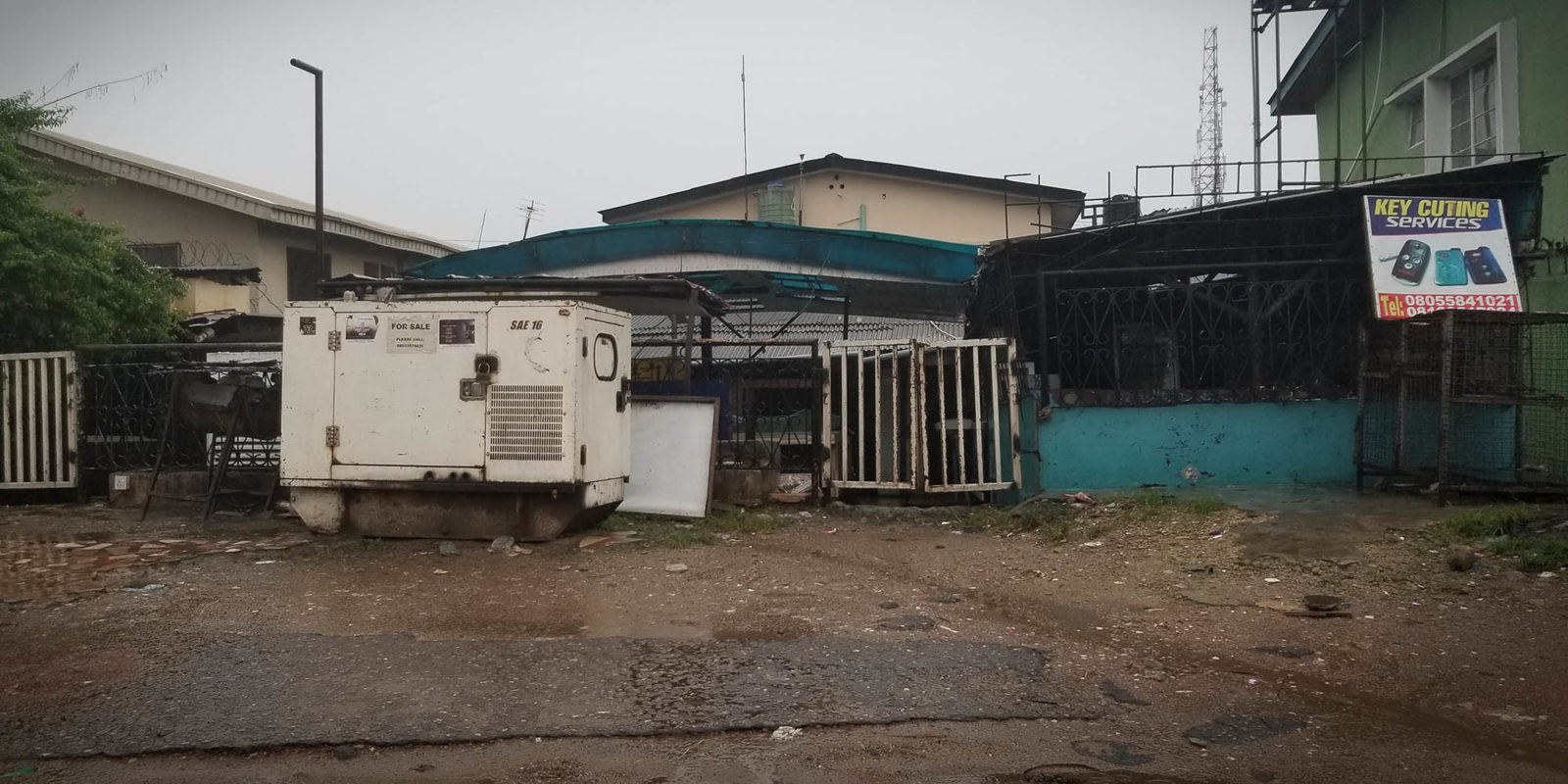 There are anywhere between 22 million and 60 million small (domestic use) petrol, and some diesel, generators in Nigeria according to research and sales organisations. And, as if those numbers are not high enough, Nigerians spend billions of dollars annually on buying and running generators.

Nigeria has the most staggering history of failing to realise its potential when it comes to generating and delivering electricity to its people. The people have found a workaround, in the form of widespread use of generators – which brings its own, sometimes fatal, problems. As well as taking a heavy toll on the environment.

According to the Access to Energy Institute report of June 2019, with global non-profit Dalberg:

On any given night across the expanse of Nigeria, you will hear the sound of petrol or diesel-powered generators. Depending on who you ask, Nigeria has between 190 million and 200 million people. For these millions of Nigerians, electricity is irregular and insufficient for their basic, daily needs. So Nigerians have turned to power generating sets in order to bring light to their homes, businesses, and lives.

But it wasn’t always like this. The story of electricity in Nigeria starts in 1886. That year, two generators were used to provide 60 kilowatts of electricity to the then colony of Lagos. In 1951, the Electricity Corporation of Nigeria was established by an act of parliament, followed by the Niger Dams Authority just over a decade later in 1962. The National Electric Power Authority (Nepa) was a result of merging the two entities in 1972.

The journey to the electrification of Nigeria was a long one, starting before the independent Nigeria and beset with troubles and stumbling blocks. These troubles have set Nigerians back in terms of quality of life and life-threatening environmental issues. Millions of Nigerians are at risk of health issues and possible complications from the use of generators and inhalation of the fumes.

Nnimmo Bassey, environmental activist and director of the environmental think tank Health of Mother Earth Foundation, said there are many environmental issues surrounding the use of generators:

“One of the most common is the noise factor. Most generators, especially the smaller ones are extremely noisy. So, there is a lot of continuous noise pollution that has an impact on productivity and on people’s health. This causes a lot of distraction.”

While some may think noise pollution is a small price to pay for electricity, it can have its own, adverse, side effects. According to the Journal of the American College of Cardiology, high noise levels can contribute to cardiovascular effects in humans and an increased incidence of coronary artery disease. The World Health Organisation also warns of the negative health consequences of noise. Ischaemic heart disease, sleep disturbances, hearing loss, hypertension and high stress levels are just some of the problems associated with constant exposure to noise.

Bassey pointed out that the smoke from generators is an indicator of the number of pollutants that are being released into the atmosphere.

“Heavy metals and other greenhouse gases released into the atmosphere regularly have an impact on human health. Where people have located their generators in enclosed places, we have had casualties from carbon monoxide poisoning.”

There have been numerous calls for the Nigerian government to make use of public service announcements and awareness campaigns to enlighten the populace on the dangers of having generators inside enclosed spaces and inside their homes.

In May of this year – 2019 – two brothers were found dead in the shop they slept in, in Lagos State. They had put the generator on in the shop and gone to sleep. In July, a family of seven was discovered dead in their home in Rivers State. Mother, father, and five children had gone to bed the night before and apparently kept the generator on in the kitchen. The family reportedly slept in the living room and the fumes spread into the room. In August, a couple in Niger State, who had been married for just eight months was found dead in their home. The culprit? The newly purchased generator that they had turned on and put in the room next to theirs. The couple went to sleep and died from inhalation of generator fumes. Sadly, these stories are not unusual and no longer cause reflection or action. These deaths are nothing more than quickly forgotten headlines.

Bassey pointed out that it is not just the fumes from generators that are cause for concern. The improper disposal of oils used to lubricate and service generators is also a major issue. He explained that waste gets into the food chain and contaminates drinking water sources. The liquid waste is sometimes obvious to the eye or even to the nostril, but because “we don’t have regular checks on the quality of our lagoons, rivers and creeks, there are some places where people actually don’t know. There are also places where they know that the water is contaminated but they don’t have an alternative and they still drink it.”

The environmentalist noted that the marine ecosystem is also affected. Bassey explained that fish end up living inside contaminated water and find their way onto Nigerians’ plates and into their bodies. And it’s not just contamination of the marine space, but also of land. The waste product from generators seeps into the land and gets into food crops. Bassey described it as a “complex web of contamination and penetration of the food system”.

Another Nigerian environmentalist, Desmond Majekodunmi, said Nigerians were not adequately educated about the environmental impact of generators. He called it a “huge omission that government should try to undertake the responsibility of as rapidly as possible.” The founder of the Lekki Urban Forest and Animal Sanctuary (Lufasi) park recommended that government must have a far more effective awareness drive about the dangers inherent in using own personal generators.

He said the use of generators is speeding up the destruction of the environment, and intensifying global warming. He pointed out that many toxic gases were released because of generators, particularly from those that use diesel.

Majekodunmi said in the grand scheme of things, in Nigeria’s case, it was still preferable for the country to use its natural gas to provide electricity to the national grid rather than having Nigerians supply their own electricity with small, medium, or large generators.

He is hopeful that Nigeria will start to reduce its carbon footprint, pointing to President Muhammadu Buhari’s speech at the United Nations General Assembly in New York on 24th of September 2019. Buhari said the country had added a million hectares of forested land to increase the country’s total forest coverage:

“On climate change, Nigeria stands resolutely with the international community in observing agreed carbon emission targets which I signed in 2015. We have since issued two sovereign Green Bonds and have added an additional one million hectares of forested land, taking our total forest coverage to 6.7% through collective national effort.”

Many Nigerians wonder how the country came to be so dependent on generators. Lagos had electric streetlights before many European cities, yet decades later we are still chasing the provision of constant, dependable electricity for the majority of our citizens.

Tunde Leye, a partner at SBM Intelligence – a research company that specialises in the geopolitics and socio-economics of Nigeria and the West African region – identified three main reasons Nigeria is in the mess it is now. He noted that Nigeria’s government mismanaged the electricity system after taking over the power generation and distribution functions from the colonial rulers.

Second, a lack of investment through the many years of military rule as well as rife corruption hampered development in the sector. Leye further stated that years of pricing electricity below its actual cost had created a “subsidy” mentality in how Nigerians view electricity. Whenever the government tried to adjust prices to reflect the actual costs, this was met with stiff opposition and political repercussions. Add a failure to privatise transmission and a few more missteps and Nigeria finds itself here.

It’s not just the environment that’s affected as Nigerians are forced to turn to generator sets to provide themselves with electricity, it’s also the country’s economy. According to the International Monetary Fund, in its country report on Nigeria, released in April 2019, the problem causes the Nigerian economy to lose billions of dollars every year:

“Lack of access to electricity and unreliable electricity supply are key constraints to doing business in Nigeria, estimated to result in economic losses of about $29-billion annually (PSRP estimate).”

Leye described this as the opportunity cost of Nigerians tying down capital that could otherwise have been invested in more productive enterprises, in providing electricity for themselves. He referred to a study done by his organisation which found that buying diesel and servicing diesel generators were the second and third highest running cost component for many small- and medium-scale enterprises in Nigeria.

But is there light at the end of the tunnel? Leye says the irony of the situation is that Nigeria has what is required to have a truly diversified electricity generation base. He believes Nigeria’s gas is the best natural advantage the country has in this area. He recommends that Nigeria solve the pricing issues on the gas value chain, make gas flaring a costly alternative and invest in pipelines. He added that the country should further diversify by investing in hydro, wind, and of course solar power.

He reiterated Leye’s point on government addressing the pricing issue in the electricity sector. For the sector to get the right funding, he advised that government remove subsidies on the energy tariff and allow market supply and demand forces to determine the price.

It is Nigerians on the street that bear the cost of no electricity from the national grid. They feel it in their pockets, affecting how much disposable income is available to them. It affects how small- and medium-scale businesses enter the market and is a determining factor in how many such businesses survive. It is very telling that year after year, Nigeria has continued to struggle with this issue.

In the end, the struggle to “light up” Nigeria may be what confines the country’s economy and what defines its progress. DM