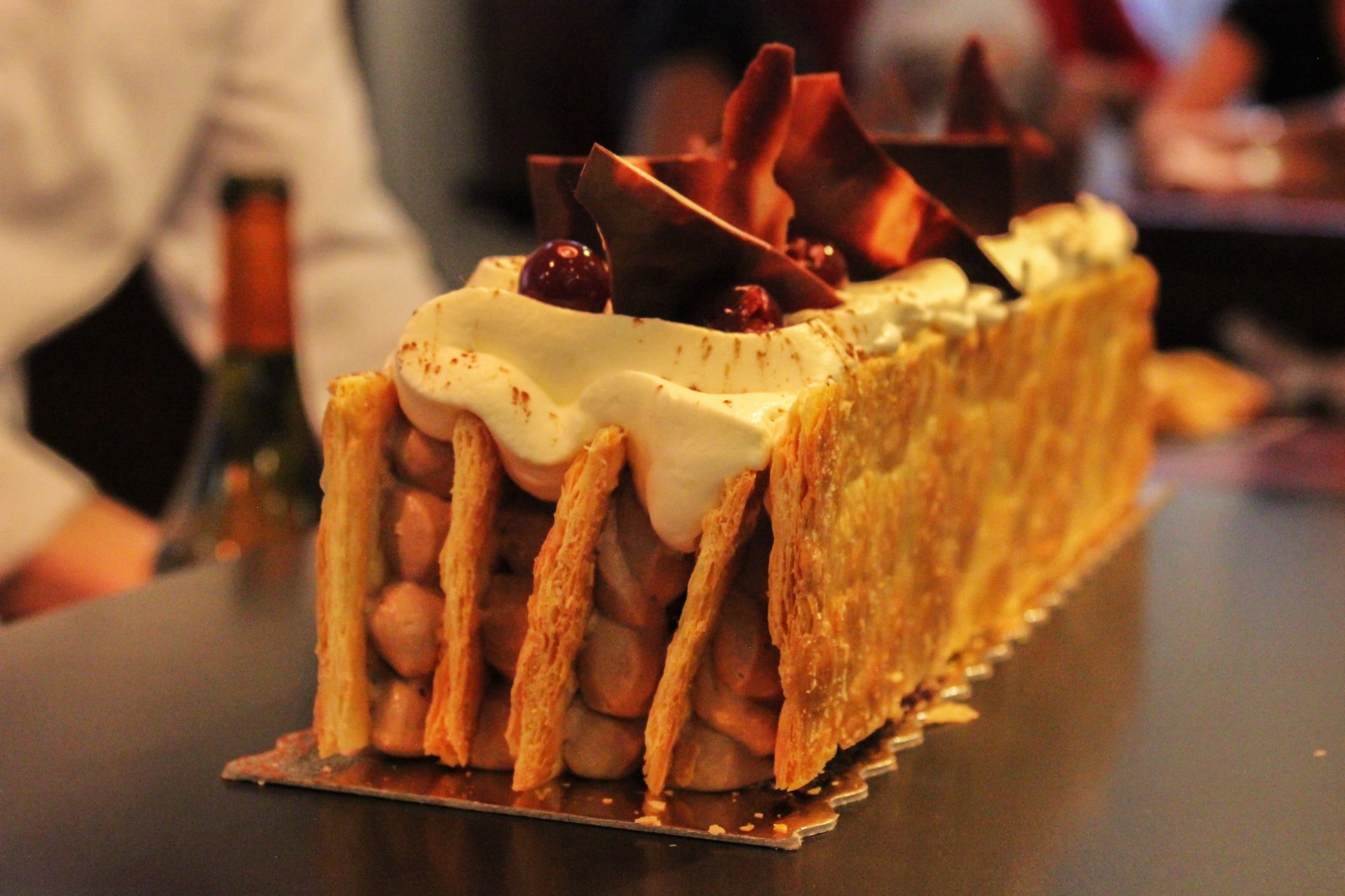 Chef Florian Py demonstrated how to make a Black Forest mille-feuille at the Alliance Française in Cape Town during the So Chef! Tour. Photo: Christi Nortier

Every year, four top French chefs visit South Africa to promote the cuisine from Potch to Pretoria. Armed with diplomat cream (yes, it’s a real thing) and techniques for the every-chef, the roadshow stopped in at Cape Town’s Alliance Française. TGIF got a front-row seat at the workshop table to see, taste and hear what it’s like to be an international ambassador for a classic cuisine some say is going out of fashion.

Master French pastry chef Florian Py crouches down to measure the glazed puff pastry with a ruler. He has brought the ruler to South Africa from his kitchen in France. It remains close at hand as he constructs his own combination of two French classics – a Black Forest gateau and a mille-feuille. Nothing about this tower of delicate pastry, various creams and boozy cherries is a millimetre out of place.

The South Africans attending his workshop at the Alliance Française in Cape Town crowd around him to ooh and aah at his precision and creativity. He pipes perfectly and flips the tower onto its side without mishap. Our kitchen would never stay this clean with so much cream and crumbs going on. We would have eaten the brandy-soaked cherries ages ago. We always burn the chocolate in the microwave. We have the recipe to take home, but how could we ever achieve this level of French artistry and perfection?

Py believes we can, and that maybe this is what will relieve French cuisine from its apparent demise internationally. It’s not as tricky and omnipotent as we think, if you know the basics – and have a ruler.

He is one of four French chefs imported by the French Institute of South Africa to teach South Africans about the techniques and values of French cuisine – from Potchefstroom to Pretoria – in an effort to win South African hearts through the stomach during the So Chef! Event.

The annual event consists of nearly a month of French cooking workshops, tastings, pairings, dinners and even movie screenings during which the audience literally eats along with the film’s protagonists. They present to the curious public, as well as culinary students, all over the country and in Maseru, Lesotho. The chefs hail from different regions of France, and some come from French territories such as Réunion Island.

Py has worked as a chef in a number of three-star Michelin restaurants, and has studied under Alain Ducasse and Bernard Daniel Jacques Loiseau. His passion is pastry and he has been a semi-finalist in the prestigious L’Un des Mellieurs Ouvriers de France (“one of the best craftsmen in France”) three times. A past winner described this accolade to Eater as being something every chef dreams of, along with three Michelin stars. Py has returned to his alma mater Lycée Hyacinthe Friant in the Jura wine-growing region where he teaches.

Py hails from the Bourgogne-Franche-Comté region in the East of France. He is on the tour as a representative of not only his cooking school, but also this region which has a close partnership with the Western Cape provincial government.

The international partnerships behind the event go even further. The event is hosted by the Alliance Française network of southern Africa together with other organisations affiliated with the French government. The French Institute of South Africa is the “cultural agency” of the Embassy of France in South Africa, whereas the alliance network is primarily French language schools which also promote Francophone culture.

According to Py, French food and diplomacy go way back to the 19th century and Napoleon. “Every negotiation was made at the table with food. It is still the case now – if you welcome a president or diplomats you make a dinner specifically. You talk about very dramatic things with a plate in front of you because it is easier to make decisions if you have something in your belly,” he says. ‘That’s why the French chef was important during this period and they used to work all over. This is why the French gastronomy became so famous – through diplomacy.”

Today, French food goes beyond being a diplomatic tool between states.

While food is not their focus, it is a major drawcard to the Alliance Française. So Chef! is their culinary bonanza of the year.

Nonetheless, Py says that in his experience there is already a good grasp of French cooking in South Africa. “Usually the basic techniques are known everywhere because French cuisine used to be a reference, so some of the techniques, dishes and presentations are known,” he says.

However, some argue the reputation and authority of French cuisine has been dwindling internationally for some time now. For over 200 years, France was the epitome of culinary inspiration and training. So much so that in 2010, the French restaurant meal was added to Unesco’s list of the world’s intangible cultural heritage.

Some argue that the quality has slipped, and to such an extent that the government has had to intervene to help French restaurants get their quality up and prices down. It has become increasingly difficult to become a certified chef or patissier. As Guardian writer Wendell Steavenson says: “Conservation can sometimes breed conservatism.”

Nouvelle cuisine and la jeune cuisine revolutions have tried their best to breathe life into traditional dishes and techniques. In 2015, acclaimed French chef Alain Ducasse partnered with the French Ministry of Foreign Affairs to launch “Good France”, a worldwide festival which saw thousands of chefs cook French food on the same day in their own restaurants or in embassies. This year, nearly 40 South African restaurants took part.

“French chefs think they are the best in the world, but I don’t think that’s the reality,” says Py. “To go abroad and teach is also a good way to discover and learn as a chef.

“I think French cooking is losing its international reputation and authority, but I think French pastry is still at the top of the list because it is so specific. I think the French cuisine is changing every day and is getting inspiration from abroad. We have a lot of influences.

“Some traditional chefs say we must keep our traditions, but I think that French cuisine done this way is from the last century and now we must do as the rest of the world does. We have some very famous competitions and they are not being won by French chefs anymore. I think we have to think about that. When you think you are the best, you stop improving and you stagnate. I think it’s a good thing to see what’s going on outside of the country.”

But, French cuisine still has a lot to offer. “If you learn and follow the rules [of French cooking], you can work anywhere and adapt. In the beginning, it is important to learn and know the basics before creating,” says Py.

Py backs away slowly as he leaves the gateau to stand on its own. Slowly it starts to topple over because the cream hasn’t had time to set and the cherries push the pastry apart. He and Jasmin rush to catch it and do so just in time. With a relieved smile Py plates the slices and eats last. His ruler and precision have paid off and so has his deviation from the traditional. Time to entice the next crowd, then. DM