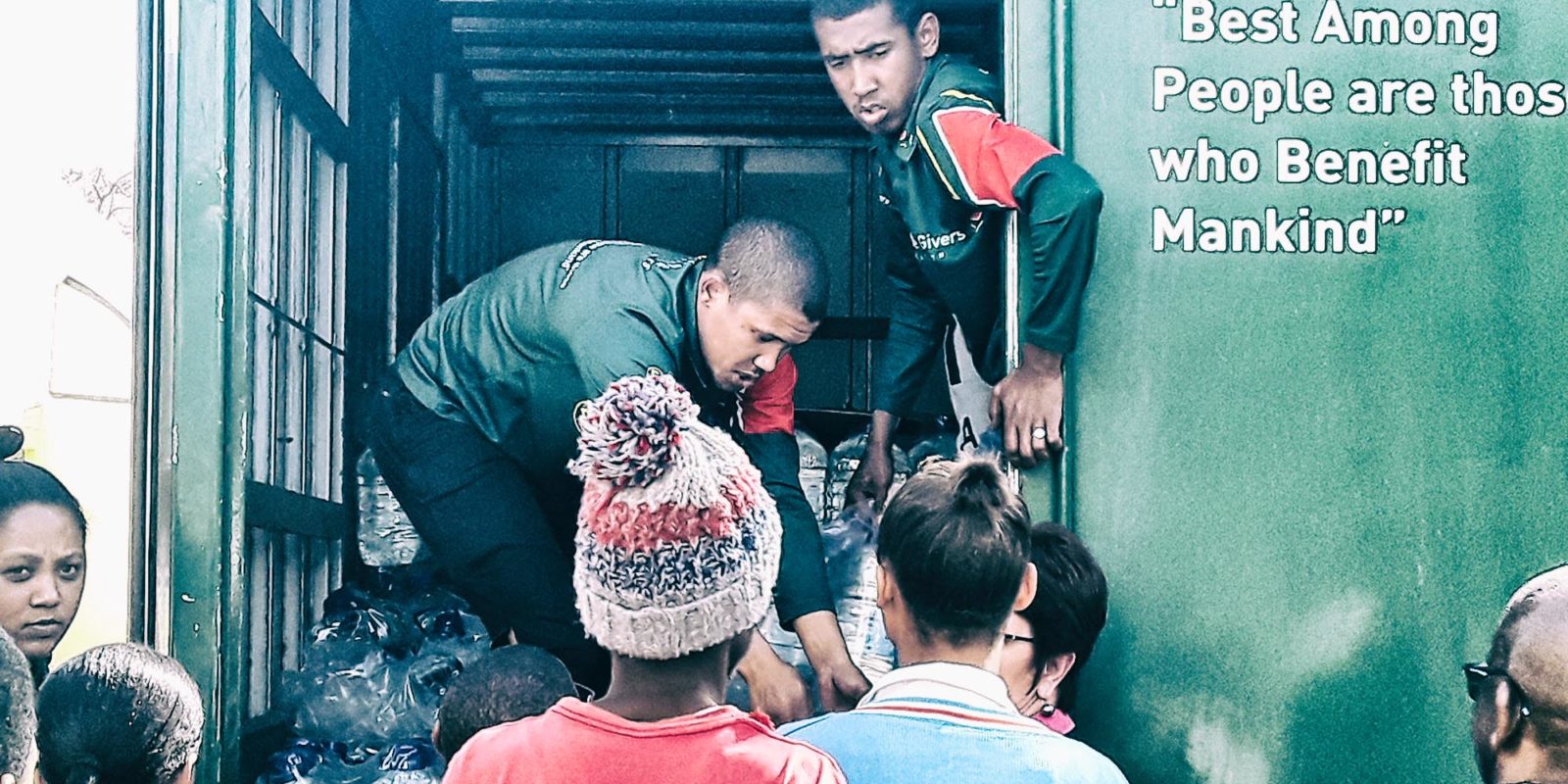 ‘The Boys’ — Gift of the Givers’ Rashied Prince and his staff in action in Graaff-Reinet. (Photo: Estelle Ellis)

As the Eastern Cape drought takes its toll, workers from Gift of the Givers work tirelessly to deliver water to impoverished communities. Maverick Citizen spent time in the towns of Graaff-Reinet, Bedford, Makhanda and Adelaide with Rashied Prince and his ‘boys’.

When Gift of the Givers’ founder, Dr Imtiaz Sooliman, delivered the fifth annual Archbishop Thabo Makgoba Development Trust Lecture at Rhodes University in Makhanda this month, he mentioned one man as an example of an outstanding leadership figure in the fight against the drought ravaging large parts of South Africa.

His name is Rashied Prince, 49, and he drives and co-ordinates the trucks that deliver drinking water and clean borehole water to communities.

Since January, the fleet of trucks that he is managing has driven “way more” than 100,000 kilometres in the Eastern Cape between Makhanda, Graaff-Reinet, Adelaide, Bedford, Aberdeen and Queenstown.

This week he was back in Graaff-Reinet driving and delivering water from a borehole in Makhanda to communities.

“He hasn’t been home in more than seven weeks. And when he is there he only wants to talk about water,” Sooliman said. “Ubuntu is our greatest asset.”

“I believe that you must be the best that you can be, because you deal with humans,” Sooliman said. “The solution is within ourselves. We just need to believe in ourselves.”

Prince, who is from Blue Downs in the Western Cape, is a veteran of droughts.

“This is my second big drought,” he said. He started helping Gift of the Givers during the Cape Town drought and has been deployed to Makhanda since January.

In the house where the drivers are staying and the trucks are kept, there are three tortoises that Prince saved from the road where they were found half-dead.

“We try to help the animals as well. We see so many farmers who are caught in this drought. It is very sad. It breaks your heart to see the animals struggling like that.

“I must give feedback to my management every 10 days. Usually, you can see when you are not needed any more. I tell them I don’t know when this drought will end. It is just going on and on. We are just waiting on God’s mercy.

“This is not an easy job. You have to be physically fit and spiritually strong. It is difficult to see people struggling. It makes me very sad. I try to look out for the elderly and the disabled people.

“When we arrive somewhere I will first explain to people that this is the water we have and we will try to make sure that everybody gets a little. I try to tell the boys to first give out only two bottles. It is better that people come back rather than not getting.

“I am from a poor community. I know what it feels like if someone needs help,” he said.

At the back of Prince’s truck “the boys”, as they are known, are calling community members to come fetch water.

They move fast, jumping from the truck and carrying water home for the elderly. Prince drives slowly through the streets to give them a chance to do their deliveries.

“The boys” are from Hanover Park where there are a lot of gang shootings. Prince said they first helped out during the drought in Cape Town and then were sent to Makhanda. Last year, another Cape Town drought volunteer, Ameerodien Noordien, 20, was killed in cross-fire while they were returning from a shop in Hanover Park.

“When we send them home their mothers beg us to bring them back to Makhanda, so that they can be safe,” Gift of the Givers’ project manager, Ali Sablay, said.

“We pay them on a Friday and the first thing they do is go to Checkers to send money to their mommies.”

Sablay buys them lunch at the KFC in town. They find an elderly man standing on the pavement and share their food and their cold drink with him.

“They have good hearts,” Sablay said. “You can’t teach them that.” MC

Covid-19 has changed the way SA’s only toll-free mental health helpline works. Here’s why it matters

S/heros and Zeros of Covid-19

After Covid-19: The renewal of society is too important to leave to states and governments alone