Bludgeoning Boks are not one-dimensional

Bludgeoning Boks are not one-dimensional 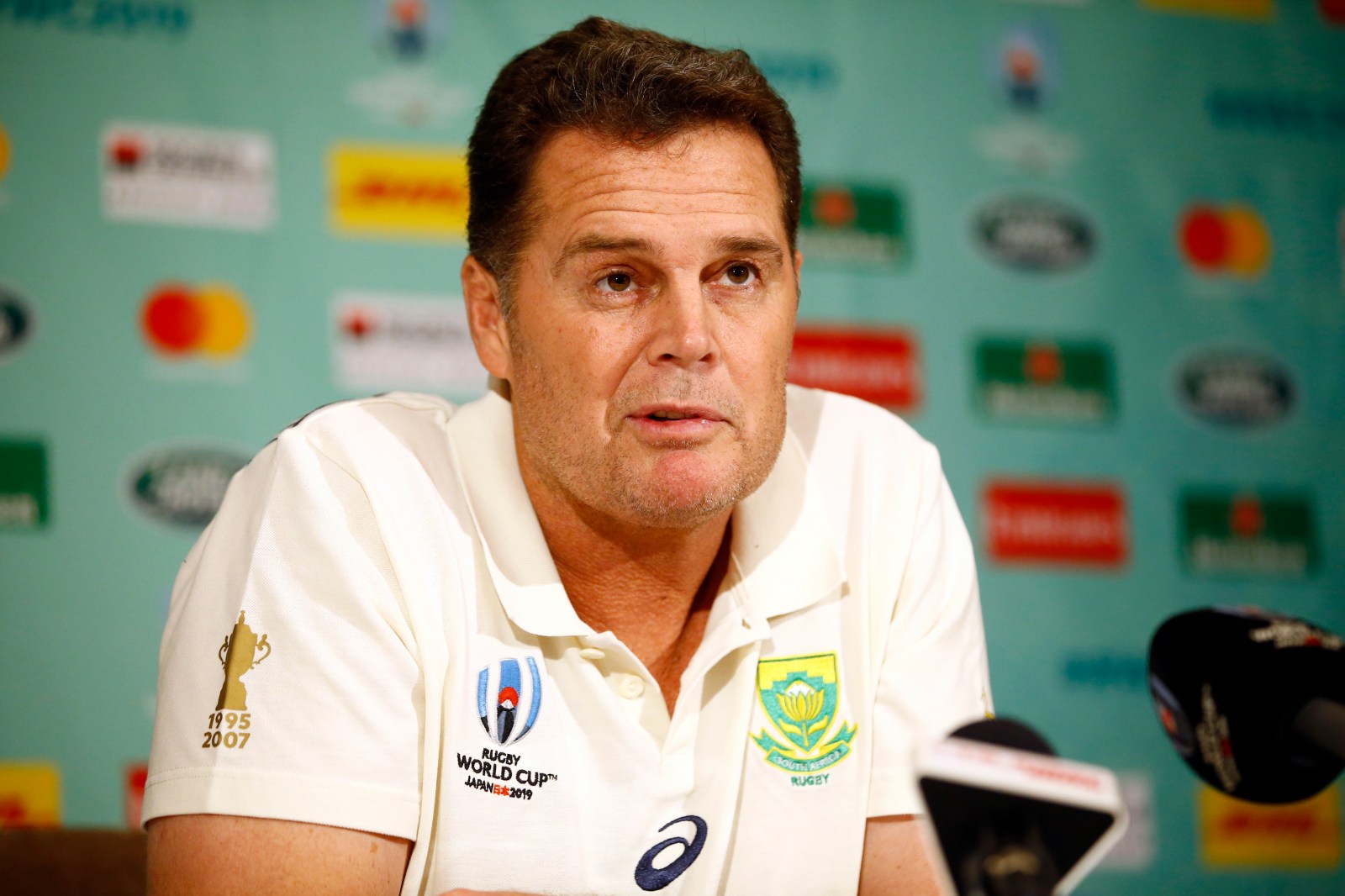 It doesn’t take a rugby scholar to know that Springbok coach Rassie Erasmus has selected a team that will ask some deep and hard questions about Japan’s physicality when the sides meet on Sunday.

Erasmus has picked a team laden with powerful runners, built to dominate collisions and the set pieces against a team that prefers to the game to be played at a frenzied pace.

The prize for the winner of the third meeting between the teams is a place in the semi-finals of Rugby World Cup 2019. Of the four quarterfinals, this is the most intriguing because of the contrasting styles each team brings.

The Boks are a direct team with a strong kicking game and perhaps the best scrum in the world with a lineout that’s in the top three. They’d be mad not to play to those strengths. But it doesn’t mean they are one-dimensional.

Japan play an up-tempo off-loading game, looking to bring their dangerous wings Kenki Fukuoka and Kotaro Matsushima into the match whenever possible.

Their players are skilful ball carriers and wily in contact, adept at drawing a defender and offloading the ball milliseconds before the tackle, to a runner usually hitting space.

Against Scotland, in the final Pool A match last weekend, Japan hardly made a mistake in the first 55 minutes of the contest. Every pass went to hand, and every offload seemed to stress the Scottish defence.

It’s an obvious concern for Erasmus and his staff because the best laid plans can come unstuck against one perfectly timed pass to a runner hitting a hole in the defence at pace.

But Japan are not only a team of fancy tricks. On closer inspection they have taken a lot from the All Blacks playbook, which is no surprise as their coach is New Zealander Jamie Joseph.

Like the All Blacks, Japan station big runners – looseforwards Lappies Labuschagne and Michael Leitch – in the tramlines (five-metres in from the touchline). That’s usually the domain of wings and other outside backs.

New Zealand revolutionised this tactic by having big, athletic men such as Kieran Read and Brodie Retallick out wide to create an overlap, or carry hard into contact against an undersized wing. Usually to devastating effect. Leitch and Labuschagne will attempt to do the same.

Erasmus though, employs power runners and defenders in the tramlines with captain Siya Kolisi and hooker Bongi Mbonambi fulfilling a similar role.

The Bok coach has made no secret of how he thinks victory will be achieved – using the bludgeon before unsheathing the rapier.

Japan are impressive with the ball but their physicality will be tested when they have to defend against a team that will send big ball carriers into contact to win the gain line battle.

The Boks are not plodders just because they are physical. Their power is utilised with purpose, which is to win those crucial metres in contact. From that platform they can deliver quick ruck ball and wait for the moment to spread their attack to the wings where Cheslin Kolbe and Makazole Mapimpi can revel.

Unlike Japan, who often play the ball wide from first phase by passing behind a line of decoy runners, the Boks prefer to set up three of four rucks using strike runners. The idea is to compress the opposing defence before attempting to move the ball into wider channels.

Another tactical battle, which the Boks should win based on what we’ve seen in this tournament so far, is the kicking game. Japan have not often punted the ball away with a view to regaining possession by contesting the kicks with an effective chase. The Boks have been comfortable using this tactic.

Erasmus wants to win the territorial battle and with the boots of halfbacks Faf de Klerk and Handré Pollard, his team has the tools to do it.

If South Africa can keep Japan pinned deep inside their own territory it would have several benefits – the Boks can strike from an advantageous part of the field and Japan will have to attack from deep.

More lineouts in Japan’s half, even if the home team have the put in, is also what the Boks are looking for because it’s a phase of the game they are sure they can dominate.

Scrums and mauls too are where the Boks want to hurt Japan, just as they did when the sides met in a pre-tournament warm-up in Kumagaya a week before RWV 2019 started.

The Boks won 41-7 that day, their first try coming after they pinched a Japanese lineout inside the home team’s 22-metre area. A few minutes later the Boks demolished Japan in a scrum and quickly worked the ball to Mapimpi who had enough space to score in the corner.

Joseph knows that the Boks will look to employ similar tactics again. How Japan combats the Bok onslaught will be key because scrums and lineouts are unavoidable.

As good as Japan are with the ball in hand, the percentages don’t favour a team playing high risk rugby deep in their own territory.

Japan’s kicking game has so far been limited to very effective stabs in behind oncoming defence close to the opposition line. What they haven’t done is used tactical kicking to win field position.

To underline the value Erasmus has placed on power providing the foundation for victory, he has selected six forwards and only two backs on the bench.

That’s a clear indication that the Brave Blossoms will be facing a never-ending physical barrage. Even reserve backline player Frans Steyn is over 100kg.

The linear view of this match is Springbok power versus Japan pace. While those might be the two overriding philosophies, the reality is that the tactics from both sides will be much more nuanced.

The Boks are creative and have special players such as Kolbe. Japan are physical, as their defence against Ireland and Scotland showed, and they have powerful ball carriers such as Leitch.

They just have different ways of reaching the end product. DM

The Boks play Japan on Sunday, kick-off is 12.15pm