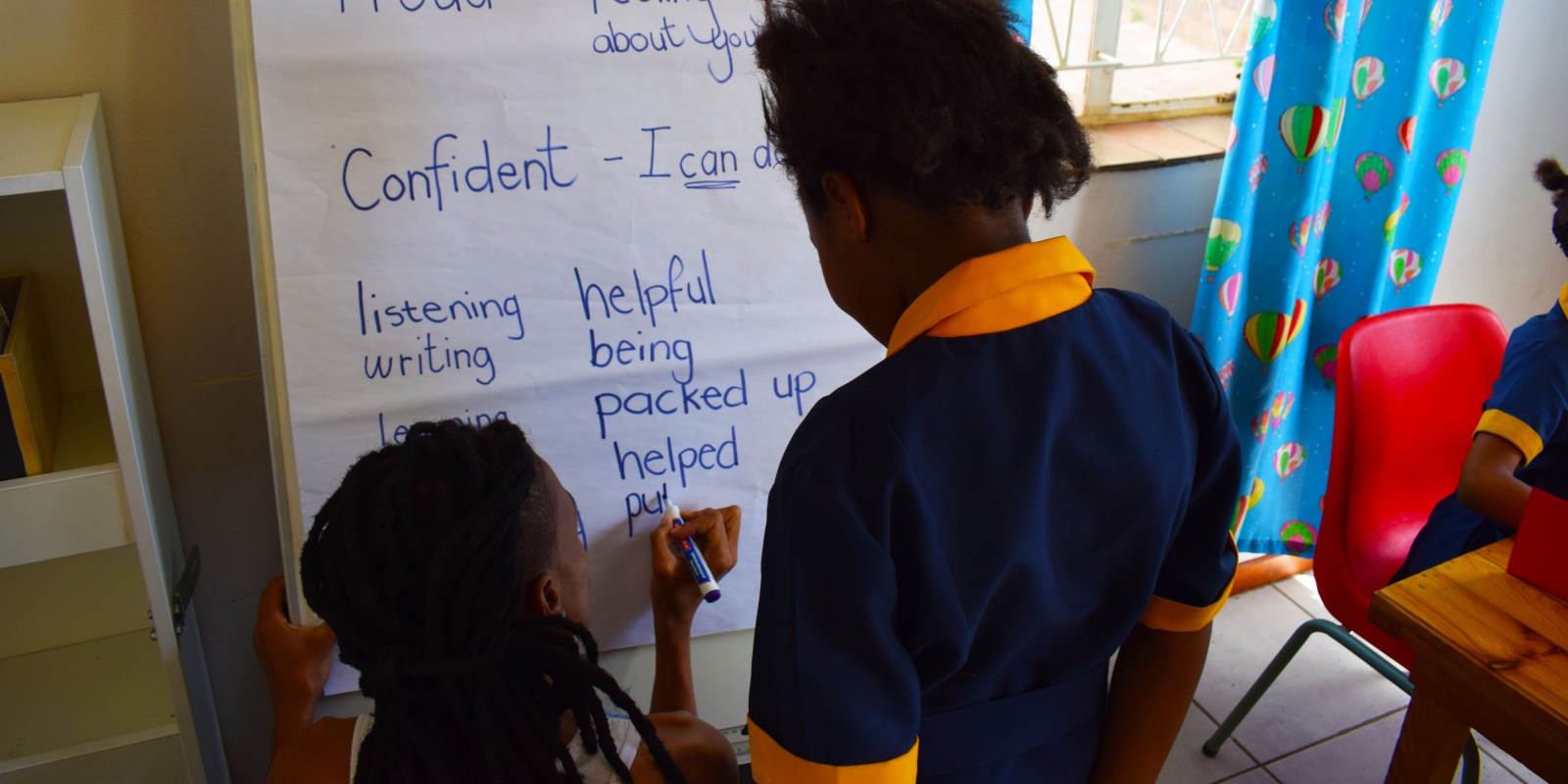 Ncumisa Somakepu grows her own vegetables and cooks feasts for hungry hikers tramping along the Wild Coast.

She is joyful as she bustles around in her rondavel kitchen. She is preparing for a party of hikers. She dices beetroot, shreds lettuce for salads, chops meat and peels a pumpkin. Pots rattle on the gas stoves, the smell makes my mouth water. There is sauteed pumpkin, boiled madumbis, umngqusho (samp and beans) and fluffy white pap.

Was she preparing a grand supper, I asked.

No, says Somakepu, surprising me. It’s only lunch.

“After such a long walk, you deserve to eat, not just bread and tea,” she says.

I leave the kitchen, stepping into the yard to appreciate the scenery.

Somakepu’s house sits on a gentle slope overlooking the Indian Ocean. We are in the Wild Coast village of Noqhekwana. Rondavels are dotted all around us. It’s quiet save for bird calls and clucking chickens. Dogs, basking in the winter sun, greet me with wagging tails. I sit down on a well-kept patch of green grass and examine my blistered, cut feet.

“Don’t worry, it will be okay,” Somakepu says.

Seven days earlier I had joined our group of 11 hikers, heading south from the Wild Coast Sun to Port St Johns. It began as a gentle beach walk, but transitioned into something much more strenuous. We scaled hillsides that felt like mountains, scrambled over boulders and struggled for our footing on cliffs above the ocean.

Body aching, I did my best to keep up. But on the last hill, less than two kilometres from the village of Khuthwini, where we were to spend the night, my heart began to race. I felt my airways tighten; my lungs rebelled, threatening to betray me. But the group rallied, handing me my inhaler.

When we finally reached our homestay in Khuthwini our guide, Sinegugu Zukhulu, advised me to sit out the next two days. I could catch a lift in the back up van to Dakane and then Noqhekwana, skipping two days of the hike and many tough hills.

It was just what I needed – which wasn’t to suggest the hike had been anything but wonderful until then.

My fellow hikers included an architect, a party planner and communications designer from Johannesburg, and students from the United Kingdom, the United States and Lebanon. They were delightful, adventurous people who I would never have crossed paths with in my everyday life as a marine biology student, cloistered behind a microscope.

Together we crossed beaches, climbed hills in a single file and bonded over our love for animals at the homestays where we spent chilly nights.

There are about 14 homestays on the 89km of coast between Port Edward in the north and Port St Johns in the south. And whenever we arrived at one, smiling faces and warm hugs greeted us.

Our hosts, invariably women, worked endlessly to keep us comfortable and fed. They went the extra mile.

At Khuthwini, after I limped in, puffing on my inhaler, Noxolile Dwetye and her children even volunteered to help my colleague, Jamila Janna, and I wash our clothes. They sang as they wrestled with our laundry in soapy buckets, hanging it out in the breeze near our rondavel.

The set-up at many of the homestays is rustic.

Zukulu said some were in need of help to put their businesses on a better footing or to improve facilities. Funding would allow for dedicated rondavels for self-catering guests; better toilets and waste disposal; rainwater tanks; and more linen.

But if anything the rough-and-ready amenities add to their charm.

Tanya Schoeman, the Joburg party planner and a bubbly personality, remarked that sleeping on a mattress on the floor had worked wonders for her back.

While I had been studying my blistered feet and taking in the view, Somakepu improvised impressively, readying her home for my group. They had left Dakane at 7am and would reach us around 3.30pm, covering about 16km.

Drawn back into the kitchen by the smell from the cooking, I sat down to watch Somakepu.

She set the washed vegetables aside to dry and rattled through a drawer for a sharp peeling knife.

I was reluctant to accept the offer. I didn’t want to take her from her work, but she had already sent her son, Msawenkosi Somakepu, 20, to pick some oranges.

Freshly squeezed, the juice was marvellously zesty. It would be a godsend for the hikers.

Immediately below the homestay is a plot, tightly fenced to keep out chickens and other livestock. It’s Sonakepu’s happy place – a verdant fruit and veggie garden.

Lettuce grew in neat rows and pumpkins defied attempts at order, their creepy stems choosing their own course. Banana and orange trees, bright red patches of tomatoes, spinach in leafy green abundance, a huge cabbage patch… as I stood mesmerised, taking in all the plenty, Somakepu approached, two friendly women in tow.

They had come to buy spinach for their families.

For R10 a bunch they were free to pick straight from the soil. Great value and how different, I thought, from the limp stuff we see in stores.

Somakepu cooks in a systematic way.

First, she chopped all her vegetables, rinsed her chicken and beef, sieved her maize meal and gathered her spices, laying them all out. She has two gas stoves which she used to braise the chicken and beef, which was for supper.

Finally, she added a host of spices and stock cubes to the chicken and beef to bring out their flavours.

She did not appear to be following any recipe or specific quantities, relying rather on practice and intuition.

With supper under control, Somakepu turned to lunchtime’s vegetable dishes. Pumpkin crackled as she dropped it into a pan of hot oil; spinach sizzled from a similar treatment.

Somakepu’s sister, Julia Jikumlambo, busied herself preparing the uJeqe, steamed bread done the traditional way. She took flour, yeast and a pinch of salt and kneaded it, before covering with a tea towel and leaving it to rise. When the dough was ready she put it into a plastic carrier bag and boiled it in a big pot of water, outside on an open fire. The taste was delicious, unlike store-bought bread, the uJeqe was warm, soft and moist.

The simplest yet most time-consuming part of the preparations was the pap. Standing by the stove, Somakepu stirred continuously to get that perfect white fluffiness.

A few hours later, shortly before the guests took their seats at the kitchen table, she laid out matching cutlery, white plates and pink and red rose-patterned bowls.

I joined the sore and famished hikers around the table. It was covered with a frilly green tablecloth and groaned under the weight of the food.

“I hate buying anything. Almost everything you’re eating is from my garden,” she told the group, three of whom were vegans and clearly delighted.

Everyone was intrigued about the veggies and grateful for the homegrown meal. We cherished the samp and beans – vital protein for the march ahead.

Somakepu has lived in Noqhekwana all her life, more than 38 years.

She has two sons, Philani, 22, and Msawenkosi. Her sister lives nearby and often helps out when there are hikers.

Somakepu is not married and her opinions on men, marriage and patriarchy surprised me. I assumed that as someone from a deeply rural part of the country she would have traditional views.

“Are you married?” she asked me, before advising me not to give it even a thought. “It’s a trap,” she warned, explaining that men, especially in remote villages like hers, “tie you down” in life.

Here, I came to realise, was no shrinking violet, but an avid businesswoman.

Once she had kept 14 horses and ran a business taking tourists for beach rides. Then disaster struck. A disease killed her horses – but not her ambition. She started out again, catering for hikers.

She feeds, shelters and cares for many in her successful homestay. She sells vegetables to her community and even supplies Spar in Port St Johns with produce from her garden.

Her face lit up when she spoke of her plans for the future. She was looking for funding to build more rondavels to grow her homestay business.

It must be tough making ends meet in what is a poor part of the country, but clearly this was one independent woman up to the task.

At Somakepu’s homestay preparations are in full swing.

Knowing guests were coming for the night, some local boys had gone fishing and returned with a large dusky kob.

Julia sets to work in the yard, sending the scales flying. Soon the fish disappears into the kitchen where it is filleted.

That night, our last together as a group, the kob served as a main dish, the pièce de résistance on another groaning table.

The fish had been done to perfection: fried crispy and golden brown, but so tender it melted in the mouth.

I have many great memories of the hike: dipping tired toes in the icy waters at Mamba Pools, near Khuthwini; seeing waterfalls like Mfihlelo and Waterfall Bluff, which flow directly into the sea; finding what looked like Stone Age tools at Xolobeni’s famed red sands; and making new friends – but above all this, meeting the tenacious Somakepu and sampling her cooking.

After everyone around the table had taken portions of the delicious cob I went back for more. Second helpings? Yes please, of the Wild Coast and what must surely be its best little kitchen. DM