Children enjoy a meal in Mvouti, a town in the Kouilou Region of southern Republic of Congo. (Photo: UNICEF)

The development of children is under threat and far too many are not growing well due to a rise in consumption of unhealthy foods, UNICEF warns in a new report on children, food, and nutrition.

A Unicef report finds that an alarmingly high number of children under the age of five are suffering from the physical consequences of poor diets and a food system that is failing them.

Children who are struggling to grow are victims of the triple burden of malnutrition: undernutrition, hidden hunger, and being overweight.

At least one in three children worldwide under five (or 200 million) is either undernourished or overweight. Almost two in three children between six months and two years of age are not fed food that supports their rapidly growing bodies and brains. This puts them at risk of poor brain development, weak learning, low immunity, increased infections and, in many cases, death.

Furthermore, at least one in two children suffers from hidden hunger due to deficiencies – often not visible – in vitamins and essential nutrients which can hamper survival, growth, and development at every stage of life.

“Despite all the technological, cultural and social advances of the last few decades, we have lost sight of this most basic fact: If children eat poorly, they live poorly,” said Henrietta Fore, UNICEF Executive Director.

“Millions of children subsist on an unhealthy diet because they simply do not have a better choice. The way we understand and respond to malnutrition needs to change: It is not just about getting children enough to eat; it is above all about getting them the right food to eat. That is our common challenge today.” 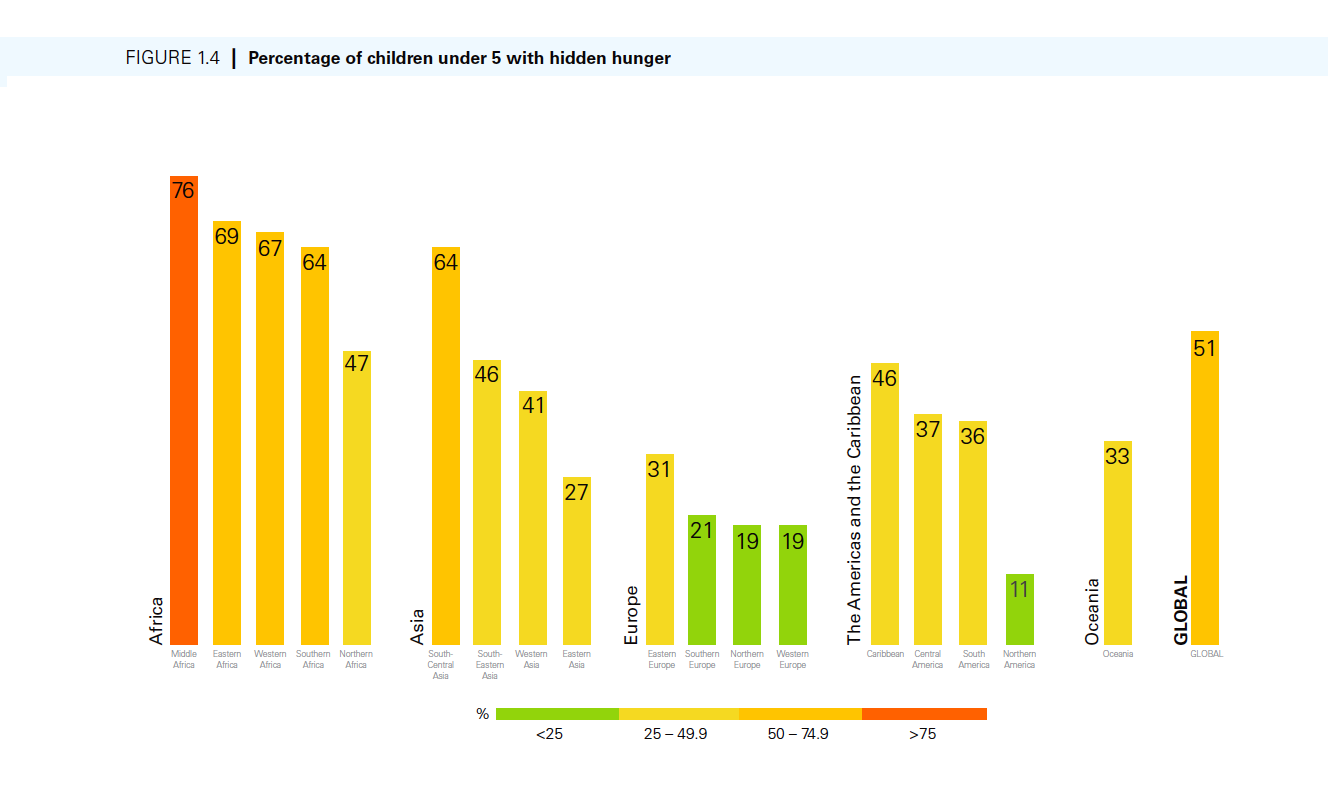 The first 1,000 days from conception to the child’s second birthday are the most crucial for a child’s development.

If the child does not receive adequate nutrition during this period symptoms of undernutrition will start to show as the child’s body undergoes stunting. This means the child’s physical growth and development has been compromised.

At this point, the child faces adverse functional consequences like poor cognition and educational performance, low adult wages, lost productivity and should the child gain excessive weight later on in their childhood, an increased risk of nutrition-related chronic diseases in adult life.

Undernutrition affects tens of millions of children around the world including the world’s poorest countries.

Sometimes, symptoms of malnutrition become visible only later on in a child’s life and by then it is too late. As the child continues to grow on a nutrient-deficient diet, at every stage of life after conception they lose essential vitamins, which undermines their health and well-being. This is called hidden hunger, and a lot of women and children around the world are affected by it. Based on the most recent data available, UNICEF estimates that at least 340 million children under five suffer from micronutrient defects. 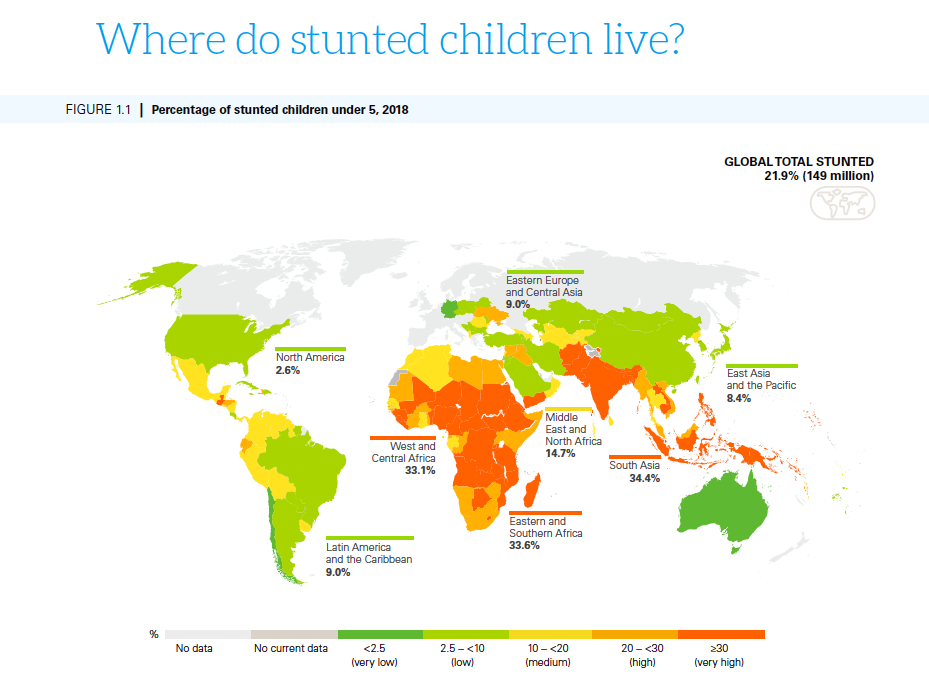 Increased availability of cheap calories from fatty and sugary foods has been accompanied by a rise in the number of overweight children while promoting obesity. Obesity also carries forth the risk of non-communicable diseases such as type 2 diabetes and coronary heart disease.

The poorest children are paying the highest price:

Life conditions as were previously known are changing. Climate change, biodiversity loss, and damage to water, air, and soil have officially declared the earth under siege. More and more people have also abandoned traditional and indigenous diets that are a source of much needed and abundant nutrition. We now embrace modern diets and for many poor families across the world , this means an increased reliance on highly processed foods loaded with saturated fats, sugar, salt, and low in essential nutrients like fibre, ultra-processed foods, grains, fruits, nuts, vegetables, seeds, and omega-3 fatty acids. 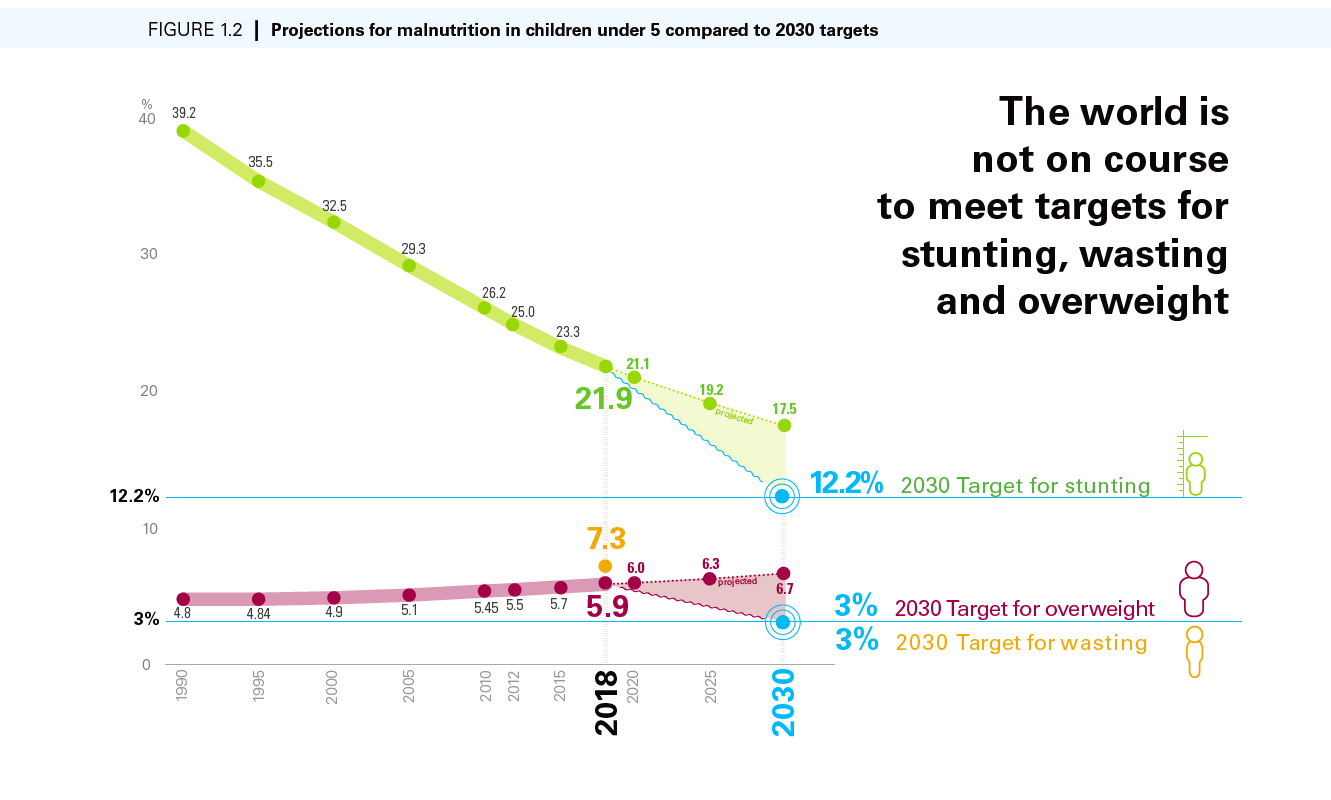 The cost of undernutrition is equivalent to countries losing about eight to 11 percent of GDP every year because of affordability and that is a huge issue considering only one in eight children getting the minimum acceptable diet, said James Elder, Regional Chief of Communication in eastern and southern Africa.

“In eastern and southern Africa, most commonly, the big problem is not getting enough quality and the right quantity. Partly it’s about parents understanding what children should eat but affordability is a huge issue in this part of the world. For many households all they can afford is maize flower to prepare porridge, but using things like milk, groundnuts, and fruit, which will increase energy, also means an increase in price,” he said.

“It is not uncommon for many families to rely on bread three times a day. Normally white bread which has very low nutritional content for children. Potatoes are also a common food source for poor households, often they are boiled and left over for future consumption and thereby complicating the digestive process as these tend to develop complex starches that make it difficult for children to draw sufficient nutrients from this food source,” said Bertha Magoge, Executive Director of African Children’s Feeding Scheme (ACFS).

Magoge also cited poverty as the main barrier to access to nutritious foods for most children in South Africa. She said that poor families are often the least informed when it comes to good nutrition and food preparation practices.

“In our programmes, we come across these children all the time. For example, we are dealing with a family of three who are children living on their own. These children rely on our feeding scheme as well as the school nutrition programme for their source of food. If we don’t provide lunchboxes for their evening meal, these children go to bed hungry. What we are also noting is that the children live in Pimville, Soweto, and in many cases one would pass their household thinking that all is well inside. This is yet another complication of urban poverty which is often a silent killer to vulnerable children,” she said.

ACFS also ensures that children have access to a balanced meal daily comprised of peanut butter sandwich, a glass of milk and a hot meal. They depend on donations from different organisations and they also work with the caregivers of children to teach them how to grow essential foods such as vegetables and other legumes.

“We teach them how to prepare and to preserve the food in a way that keeps the nutrients intact,” said Magoge.

James Elder said there are two ways that parents and families can try to counter the problem of malnutrition, which are effective only in the first 1,000 days of malnutrition. The first is stimulation: “Anyone, grandmother, aunty, sister etc that just spends time with the little one playing games, using colours, or through songs.”

The second is strictly breastfeeding in the first six months of the child’s life. “The best thing about breastfeeding is that whether you are rich or poor, everyone has the ability to breastfeed their child. That is the best possible nutritious protective food a child can get,” he said.

The latest national survey (SA Demograhic and Health Survey 2016) reported that 32% of children under 6 months were exclusively breastfed, while 25% are not being breastfed. Just over one-quarter (27%) of children under 5 years were stunted, an indication of chronic undernutrition, said professor of Nutrition in North West University Salome Kruger.

A group of scientists from South African universities and organisations have convened periodically since 2007 to compile the Healthy Active Kids South Africa (Haksa) report cards and aim to report on the available evidence relating to physical activity, sedentary behaviours, nutrition and body composition of SA children and adolescents (three to 18 years old).

“Areas of concern in the Haksa 2018 report were high amounts of screen time (TV, cellphones, tablets) and sedentary behaviour, as well as low fruit and vegetable consumption, and high intake of sugar-sweetened beverages and fast foods.”

Results from the Haksa 2016 report card indicated that more than 50% of SA children were physically active, and government policies for the support of sport and physical activity in children and adolescents were evident, although a lack of opportunities to participate in organised sport persists.

“More nutrition education in schools, primary healthcare clinics and on other public platforms is necessary to improve the knowledge of consumers about what kinds of foods are healthy and how to spend their money wisely,” he said.

Bertha Magoge said adults need to be supported in finding alternative ways of making an income so that they can build sustainable households.

“It is also imperative that the poor households are surrounded by appropriate services that will assist to pick up these problems soon before children get to the stunting stage. We understand that once stunting has secured then no amount of feeding will reverse the effects,” she said. DM