Kipchoge’s feat was 60 years in the making 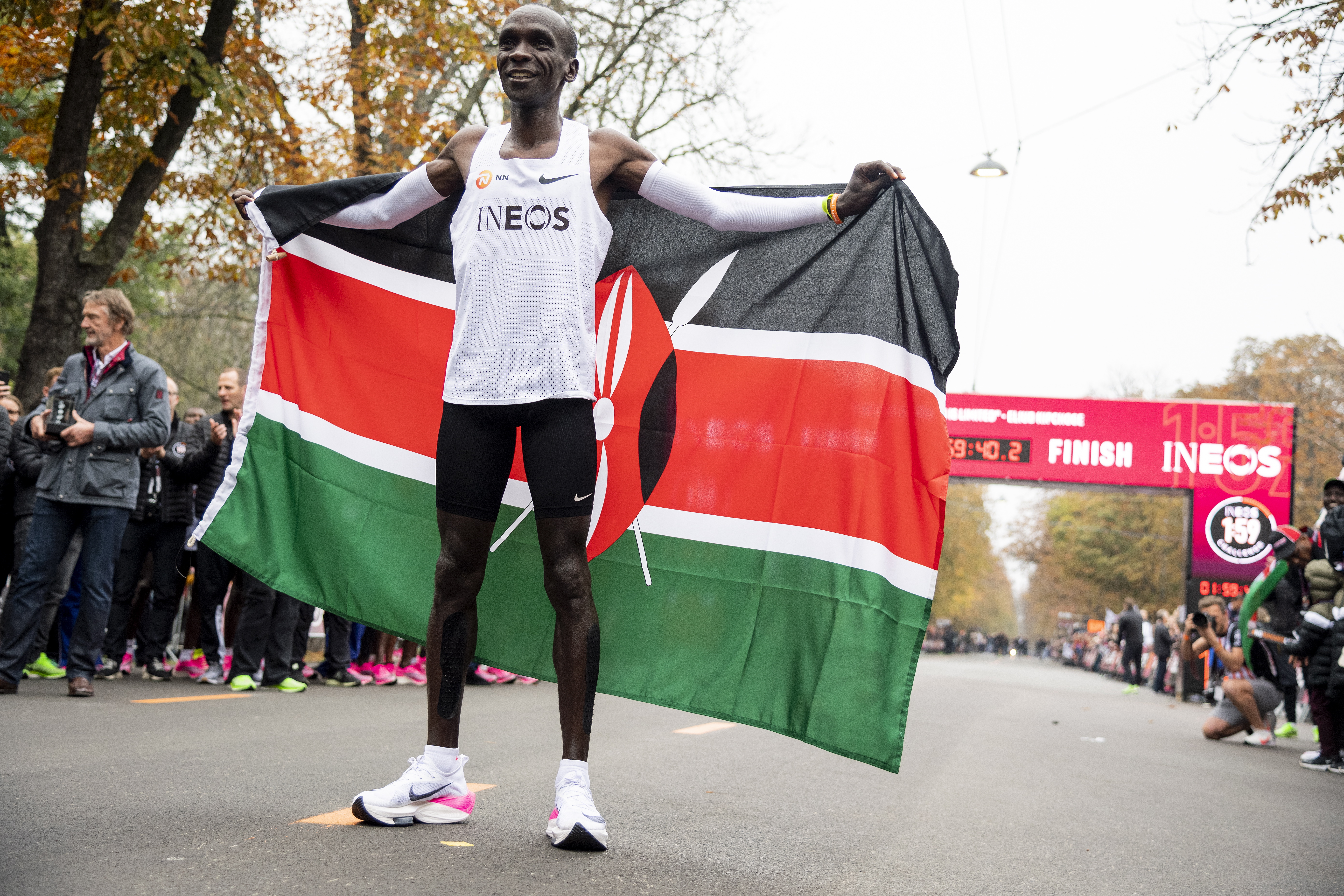 Eliud Kipchoge, Kenyan marathon world record holder, celebrates with the flag of Kenya after the INEOS 1:59 Challenge in Vienna, Austria, 12 October 2019. Kipchoge attempted on the day to beat his own record becoming the first person to run a marathon distance under two hours, recording a time of 1 hour 59 minutes 40 seconds at the event. EPA/CHRISTIAN BRUNA EDITORIAL USE ONLY

Eliud Kipchoge’s one hour, 59 minute and 40 seconds run at the weekend has been described as the athletics’ equivalent of the moon landing or scaling Everest for the first time.

“I set my record because East Africa was asleep, otherwise I wouldn’t have been first to break the four-minute barrier,” was how Fordyce recalls Bannister’s words.

“Bannister wasn’t trying to be modest, he was stating a fact,” Fordyce told Daily Maverick.

The 34-year-old’s remarkable run took human endeavour beyond a boundary many believed reachable. Even fellow Kenyan athlete and former marathon world record holder Paul Tergat claimed that breaking two hours was impossible when he posted a time of 2:04:55 in Berlin in 2003.

But that was in a race situation, where cracking the two-hour mark remains elusive given the variables such as course undulation, competitors’ tactics and lack of pacesetters.

Kipchoge achieved what seemed impossible – like Bannister 65 years earlier – in pushing the boundaries of human achievement further along a limited spectrum through a combination of science, technology, physiology and sheer talent.

It’s a limited spectrum because humans will never run a marathon in a few seconds, but we still don’t know what the ultimate barrier is. Kipchoge proved that it’s not two hours.

Genetic superiority, social circumstances and a long heritage of running have combined to make athletes from specific pockets of Africa create new standards in distance running. Kipchoge’s recordbreaking feat has recalibrated what we believe is possible.

African athletes, particularly from East Africa, have dominated middle and long distance running since the 1960s. When Bannister clocked three minutes 59.4 seconds at Iffley Road in Oxford in 1954 to dip under the mythical four-minute mark, it was a different world.

Bannister achieved what physiologists at the time considered beyond the realms of possibility, but their data was almost exclusively limited to studies of Caucasian athletes from Western countries.

Black African athletes hardly competed in international events outside the Olympics. It was only in the 1960s that the world started to appreciate the latent running talent coming from Africa in particular.

Bikile’s moonlight finish in the Eternal City, having covered the 42.2km course over Rome’s rough streets without shoes to break the Olympic record by seven minutes 47 seconds, remains one of the greatest athletic achievements in human history.

But even that has to defer to what Kipchoge did in Vienna.

Kipchoge’s one hour, 59 minute and 40 seconds run last weekend has been described as the athletics’ equivalent of the moon landing or scaling Everest for the first time. The two-hour marathon barrier was broken. And it took almost as many people and as much time as the moon missions to plan and execute.

“I got very emotional when he crossed the line,” Fordyce said. “All the negativity about the science and the contrived conditions doesn’t change the fact that Kipchoge did it. He broke two hours.

“What was astonishing for me was how easy it looked. He didn’t collapse when he crossed the line. Instead he ran back down the course and celebrated. I’ve been to the medical tent a few times when winning the Comrades (SA’s most famous ultra-marathon), I was so exhausted.

“But I also had a few where I won and felt fresh and could’ve done another five kilometres. We haven’t yet seen Eliud completely exhausted and broken at the end of a race.

“His running style is so economical and he is so light, so his strength to weight ratio is phenomenal. Obviously he has a sky-high VO2max (the maximum rate of oxygen consumption during exercise) and a very tough head.

“You can’t underestimate how mentally strong he is. The last 12km of a marathon are extremely tough and he looked in control. I wouldn’t want to be running against Kipchoge at the next Olympics. We can give him the gold medal already.”

Fordyce also believes that now the barrier has been broken, it will happen with more frequency.

“Just like the first landing on the moon, where the astronauts were on the surface for a few hours. By Apollo 17 they were driving moon buggies on the lunar surface and there for days,” Fordyce said.

“When Edmund Hilary and Tensing Norgay climbed Everest it was epic. Nowadays there is a queue to summit the mountain each year. That’s what happens when barriers fall.”

For Kipchoge to achieve the goal required detailed planning, which in turn needed money.

Enter Ineos, ironically a petrochemical company owned by Britain’s richest man Jim Ratcliffe and sportswear giant Nike. The two companies shared resources and funded a project that took two years to plan and execute. From handpicking the best athletes to pace Kipchoge, to developing a lighter, more durable version of Nike’s Vaporfly shoe that would give Kipchoge valuable seconds on the course, to hundreds of other details. Nothing was left to chance.

The Vaporfly trainer has a curved plate so runners can roll their foot instead of bending their toes backwards with each stride. It’s more efficient and they expend less energy with each stride.

Much like the Speedo swimming suits of the early 2000s that saw multiple world records in the pool slashed because it lowered drag in the water, the Vaporfly has had a massive impact on long distance running.

In the past year, athletes wearing the shoe have set the five fastest marathon times in history.

Vienna was chosen because it’s flat with almost no gradient deviation. The weather in October is cool, but not too cold, there is no wind and, crucially for Kipchoge, there would be crowd support.

In his previous attempt to break two hours in 2017, at the famed Monza motor-racing track in Italy, Kipchoge missed the mark by 26 seconds. One of the problems he identified in the debriefing was that there were no fans to add atmosphere.

All these details and more were taken into account; they were plotted and planned to develop the near perfect scenario for the sub-two-hour attempt.

But even with all the science and the murderous training regime (to prepare, Kipchoge ran the equivalent of four to five marathons a week at an altitude of 2,400m in Kenya for months) one athlete still had to cover 42.2km in under two hours on a set day.

Inevitably that athlete had to come from East Africa.

“The VO2max values and lactate thresholds for the elite East Africans are impressive but not exceptional for world-class runners,” Dr Michael Joyner, one of the world’s leading experts on human performance and exercise physiology, wrote in an article for Outside magazine in 2013.

“However, they are very efficient, allowing them to generate more speed with less oxygen. Their small size might also permit them to thermoregulate better. Finally, a lifetime of physical activity at high altitude can’t hurt.”

At this moment in history and at this time in human evolution, only one man could have contemplated doing it.

Of seven billion people on earth, Eliud Kipchoge, through a combination of genetics, heritage, science and timing, was that person. DM