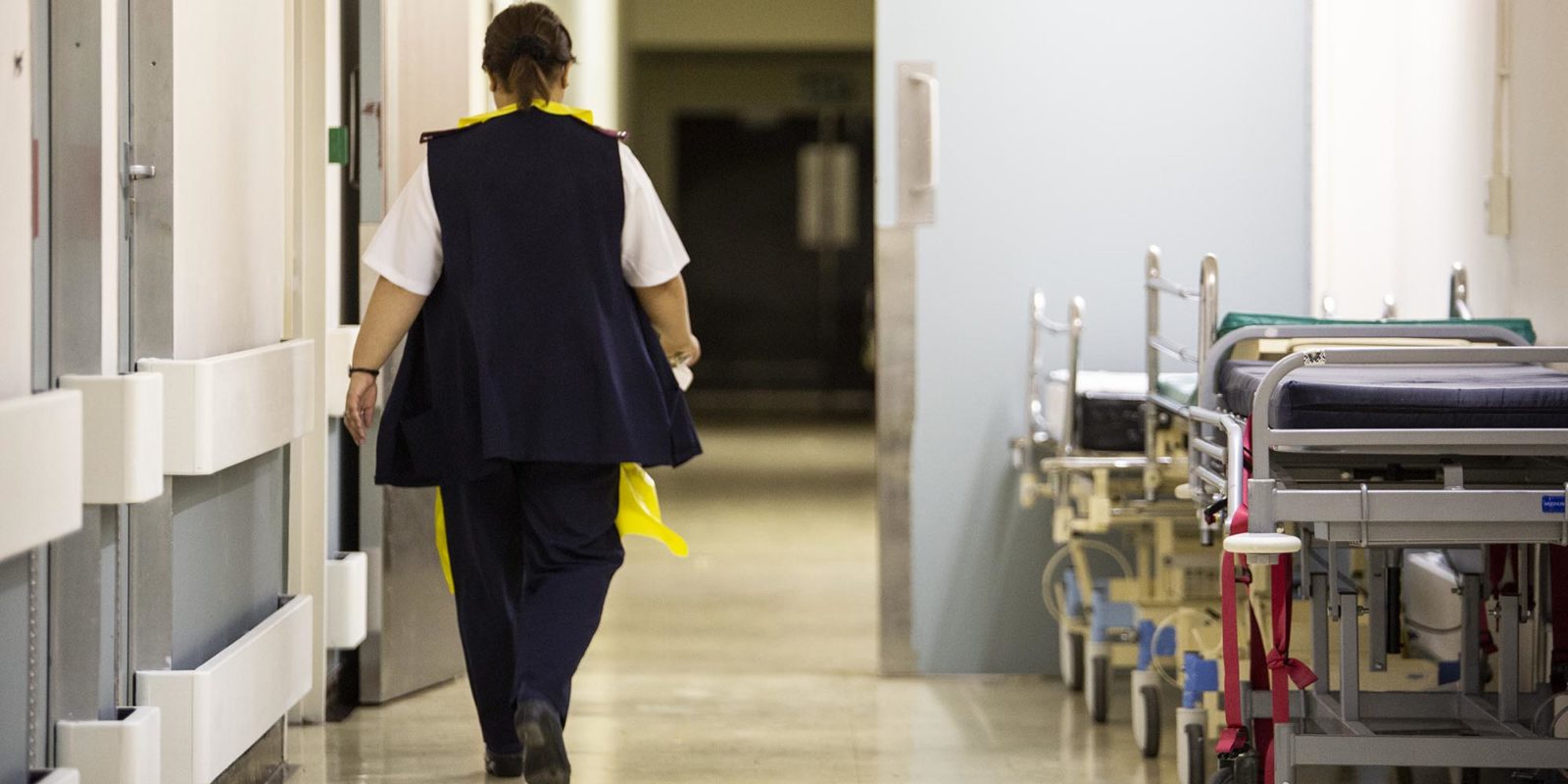 If NHI has a hope of going through as a progressive policy, it needs as many proponents with bite as possible to counter the various, vested interests, says the writer. (Photo: Daily Maverick)

The focus of NHI needs to shift from talking about fixing the public service first, to saving money first, especially in the private sector.

Health economists study health financing reform, generally, but expertise is also required from those in the field of health policy and systems. This is important in terms of health sector policy change in general, but also due to their expertise in the “how” of policy implementation and what is essentially rethinking a socio-economic, political and cultural system (the health system).

The need is clear from the 2016 National Health Accounts (tracking all healthcare expenditure in SA) that I worked on with Mongi Jokozela from the National Department of Health, Tomas Roubal from the World Health Organisation and Shivani Ranchod from Percept. The results were not publicly released, like other resource tracking work commissioned by the previous administration (headed by former health minister Dr Aaron Motsoaledi). Motsoaledi’s administration was, in my opinion, often insular and wary of public debate.

In the National Health Accounts Report, we found government was subsidising the private sector by 29% of its (the private sector’s) total health expenditure (as of 2014), including through the tax break on medical aid contributions introduced about a decade ago. This is strong evidence, in my opinion, and backed up by the Competition Commission’s recent Health Market Inquiry (HMI) findings, for “vested [private] interests” influencing past government policy substantially, and why we should still be very wary of that now while looking for constructive ways ahead.

In this article, I explain why I think the strategic focus of NHI is wrong, essentially since the government is not taking the vested interests seriously enough. I also outline what I think is a better way forward in terms of focusing on cost savings first in order to make the NHI policy more viable.

Health is not a commodity

But first, let’s get something straight. As any health economist will tell you, health is not a commodity to be freely traded, rather it is a “public good”. This means that, like education and security, health should be freely available to anyone and everyone who needs it (everyone) and generally provided by the government (not to say that the private sector doesn’t play an important role) in the interests of efficiency and population health. For me this implies that education (public schools vs Sachs) and security (police vs ADT) also need some kind of NHI or redistributive system, since unequal access to those services is also driven by excessive privatisation.

I must also clarify something else before proceeding. An NHI Fund that pools public and private monies and implements “strategic purchasing” (as set out in the NHI Bill), is there primarily to save money. The NHI also proposes that everyone will have to go on a single, presumably basic, medical aid plan (perhaps even a hospital plan to start – Alex van den Heever’s suggestion) provided for by the government. One will purchase additionally, if one can afford it, from a medical aid plan, allowing for greater redistribution through increased “pooling” of funds. This may be seen as leading to less “choice”, but the amount of choice people have at present in choosing between medical aids is highly debatable, as highlighted by the HMI report.

How is it that NHI could cost less? With very high volumes, a single “monopsony” purchaser would always expect to get the best price. Other “strategic purchasing” initiatives include detailed cost analysis (to work out how much is reasonable to pay), and comparisons with what other countries or organisations are paying (to try to pay less where the volumes are higher), as well as using cost-effectiveness analysis as standard for decisions about what services to provide and in what quantity. If government introduced a private sector “risk adjustment”, as it was meant to do years ago, medical aids would also become much more affordable to poorer people (because medical aids with poorer patients could be subsidised by the likes of Discovery, as recommended by the HMI).

We should be worried about government pilfering from the NHI Fund given its pilfering elsewhere (including from health budgets in various provinces, clearly). We should also be particularly worried about this since the minister of health has vastly too much power as set out in the NHI Bill. As Associate Professor Susan Cleary recently mentioned, the minister’s title is repeated more than 140 times in the NHI Bill, including in areas giving him oversight of highly technical details of the fund. It is not clear that an NHI Fund is the best way to proceed, in fact, given the potential for corruption, and there are other options that should be considered such as an independent negotiating body that doesn’t actually touch any money itself, at least in the short term.

Potential to save money

But that aside, let’s focus on the potential to save money. This is not particularly in the public sector, in fact. Although waste and theft can be common and quality can be questioned, services are overall still a relative bargain. The private sector should be the main target, since it essentially steals money too (called “rent-seeking behaviour” in economics) by making extravagant profits in terms of the “oligopolisation” (centralisation of market power) of the private hospital sector, for one, as clearly demonstrated in the Health Market Inquiry. Private specialists also sometimes charge three times what a reasonable price apparently is (though of course that rate should be properly negotiated) within the law and overseen by the Health Professions Council of South Africa (HPCSA). Pharmaceuticals are also still unnecessarily costly in the public, but especially the private sector.

To come to my point, a number of us researchers and policymakers have been having stimulating debates about what the way forward should be for NHI on an active list-serve with 500 members – primarily health policy and systems researchers and health economists. The list-serve is administered by Dr Jill Olivier (see contact details on UCT website to request to join) on behalf of the Public Health Association of South Africa (PHASA).

Shift the focus of NHI

As a result of these and other debates, I am now convinced the focus of NHI needs to shift from talking about needing to fix the public service first, which is not a financing reform and will arguably take forever, to the NHI Fund, or health financing reform more generally, needing to save money first and especially in the private sector.

Why? Because that is the first step, and the real test, really, on whether the NHI Fund is able to do its job as a strategic purchaser. If successful, medical aid costs could go down and the people who pay the most (too much) for healthcare would be a lot more open to talking about redistribution or joining a mandatory scheme that comes with a price tag.

The savings could also potentially be redistributed to the underfunded public sector through a financing mechanism such as the NHI Fund (or another independent body), but that would still mean at least medical aid costs wouldn’t increase. Given the stagnant economic and fiscal (government spending) situation, that’s a very good thing. Also, the middle class could get behind the solidarity element in NHI quite easily if they didn’t have to pay more for it (at least at first) and so could employers if they didn’t have to contribute to a new tax. Then the NHI policy might even be universally popular – a far cry from the current situation.

It would also be implementable. Negotiating down private (and public) sector costs centrally is something all governments that care about their citizens do and is key to NHI but can be implemented without or before introducing a mandatory medical aid. It is something the public sector here should be able to do since it already pays a lot less for its services relative to the private sector (including pharmaceuticals).

I stress “should” because why not test it first? Especially given all the controversy over whether we have the institutional or human resource capacity to do it. The private sector should not be as expensive as it is, and the public sector is highly under-resourced when you ignore the large and necessary injection of cash from Treasury for HIV/TB services, and not much else, over the past two decades. It is also well-known that we spend a lot on health already, around 9% of GDP, and have some of the worst health outcomes relative to other middle-income countries.

Private specialists like surgeons, and hospital groups such as Life won’t like it, but they won’t like anything with the letters “NHI” or “UHC” on it. As Marsha Orgill from UCT put it to me, some specialists might just have to move from Bishop’s Court to Newlands. The bottom line? If NHI has a hope of going through as a progressive policy, it needs as many proponents with a bite as possible to counter the various, vested interests. MC

Dr John Ashmore is a health economist who works for the SA Medical Research Council’s (SA MRC) UHC Collaboration, was previously a consultant to the WHO and USAID, and was deputy country director for Doctors Without Borders. He has a PhD in Health Economics from UCT and has also worked in Ethiopia, Kenya, Malawi and Lesotho.

Spotlight is published by SECTION27 and the Treatment Action Campaign. Its editors have full editorial independence – independence that the editors guard jealously. Spotlight is a member of the South African Press Council.