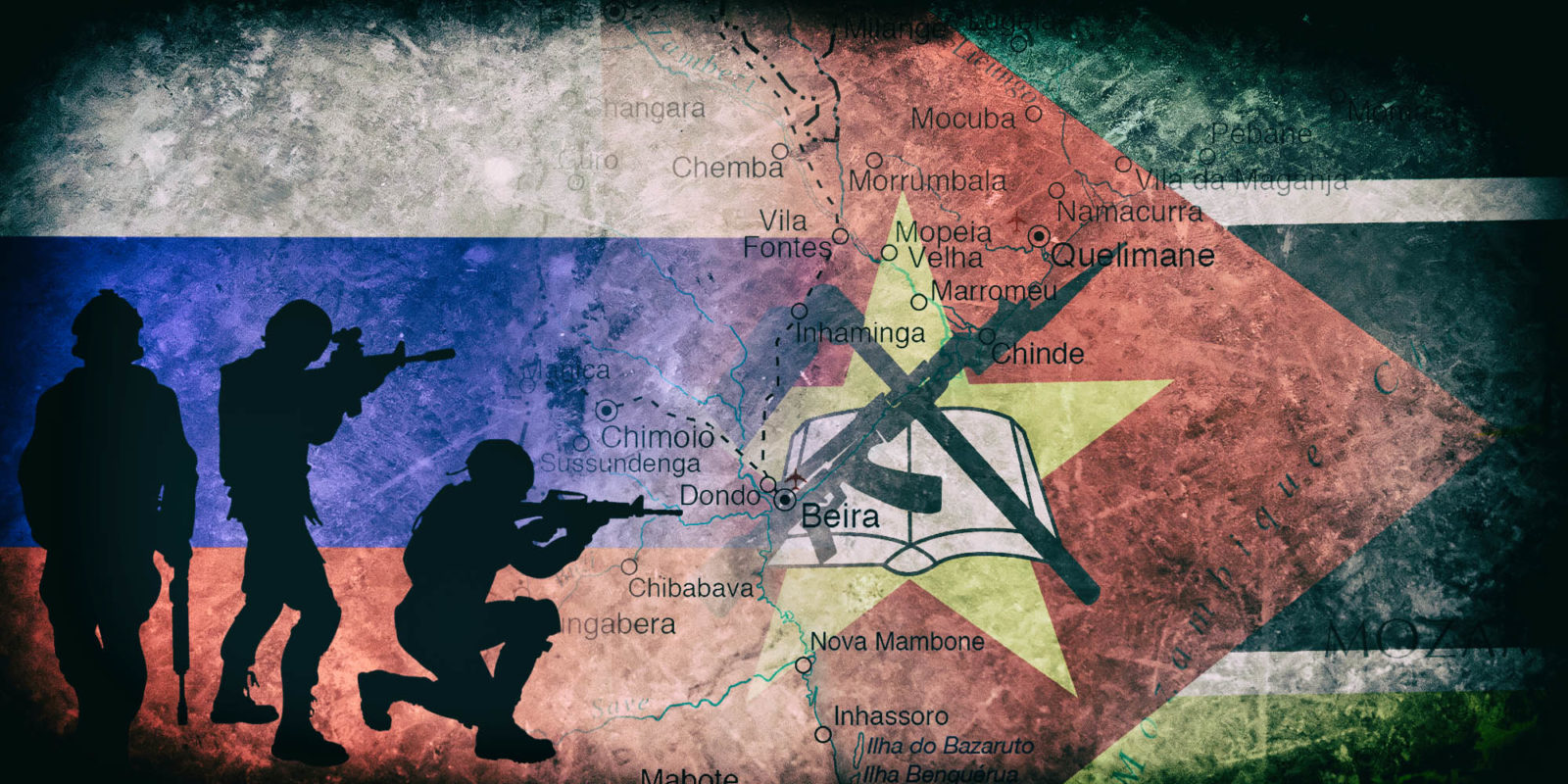 In the run-up to the October 2019 Mozambican general elections, bilateral relations with Russia signalled a change in direction for existing volatile stability patterns, especially in the northern Cabo Delgado region. Mozambican armed forces are not equipped to deal with the insurgency in the north – but there is a price to be paid to Russia.

In October 2019, Russia’s military presence in Mozambique’s northern province of Cabo Delgado became a reality against the backdrop of recent insurgent advances by ISIS-aligned jihadist groups in the area.

However, the Club of Mozambique reported on 9 October 2019 that the Mozambican Ministry of Defence claimed successful military action against armed groups who were responsible for the destruction of villages and murders in Cabo Delgado — referring to eliminating “criminals” in the Mbau region between the Messalo and Muera rivers in the Mocímboa da Praia district.

In addition, well-placed sources reported that the Mozambican military, most likely supported by Russian soldiers, executed bombing raids directed at an insurgent military base in Quiterajo (Macomia District). Sources reported that according to the military, insurgent informers were also captured. Current media clampdowns make confirmation of exact details pertaining to reported successes difficult and allow a narrative space for the government to project a message of its gaining control. 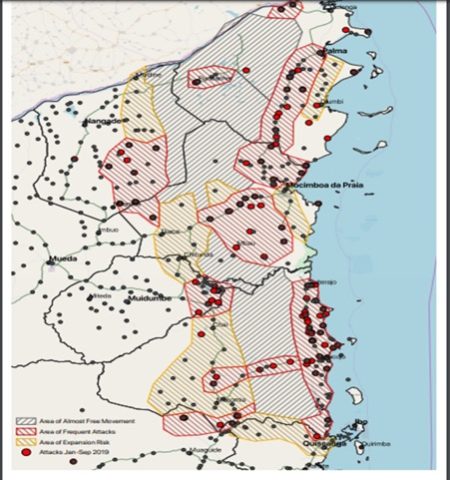 Areas of attacks and insurgent strongholds in Northern Mozambique

Despite omitting any reference to possible Russian military involvement in the initial communiques about counter-attacks in the area, the narratives presented no deviation from the Russian strategy of escalating its influence and presence in Africa. The realities behind the deployment are one of securing soft-power gains (economic) followed by hard-power tactics in creating an illusion of stability.

Will a Russian presence remain a significant factor?

Relations between Mozambique and Russia

Bilateral relations between the two countries date back to the 1960s when the former Soviet Union supported the resistance of Mozambique’s Marxist-oriented Frelimo against Portuguese colonialism. Diplomatic relations were formalised in 1975 after Mozambique gained its independence from Portugal. Since then the Russians have established themselves as a major-league military, political and economic partner in the strategically located southern African country.

The longstanding alliance culminated in a working visit by President Filipe Nyusi of Mozambique to Moscow in August 2019 by invitation of his Russian counterpart, Vladimir Putin. Several high-level interactions over the past two years preceded the presidential visit, indicating the improvement in co-operation between the countries. The expanded collaboration included interaction between the Russian and Mozambican foreign ministers in 2018 in Maputo that paved the way for increased security and counter-terrorism co-operation as well as the signing of several economic co-operation agreements.

It is significant that Nyusi was the first Mozambican president since 1987 to be welcomed in Moscow, and from the subsequent press conference, it was clear that Russian involvement in the Mozambican energy sector, specifically the liquefied natural gas (LNG) development project in Area One of the Rovuma Basin, featured prominently on the agenda.

However, against the backdrop of the ever-increasing threat of radical Islamic insurgents in Cabo Delgado, it can be safely deduced that maintaining the ongoing Russian military-related support/assistance would also have formed part of the interaction between the presidents. After all, the Mozambican deputy minister of foreign affairs and co-operation, prior to the heads of state meeting, publicly said Mozambique wanted to prioritise the strengthening of defence and security co-operation with Russia.

The most notable outcome of the visit was the debt relief Russia extended towards Mozambique. During his opening address to the Mozambique-Russia business forum, Nyusi announced that Russia had pardoned 95% of Mozambique’s debt. The president also encouraged the more than 500 delegates (among whom are at least 450 Russian business representatives) to invest in the many sectors in the country, highlighting agricultural, tourism and mining (minerals) areas. According to several senior Mozambican government officials, the visit turned out to be a major success with regard to key agreements with Russia. A summary of the most prominent deals is as follows:

Rosneft and Gazprom are also mentioned in a possible “behind the scenes” takeover of the government oil company, ENH, that was created after US giant Enron discovered gas deposits in Inhambane. The South African oil and gas company, Sasol, later took over the assets. ENH has shares in most of the respective exploration/producing areas. However, it is in desperate need of financing its share in the development of the respective areas/blocks. Rosneft/Gazprom would, as part of the deal, receive preferential rights in future oil and gas exploration areas. Technically bankrupt and without credit, ENH relied on Nyusi to negotiate alternatives with financial institutions in Russia.

Russia and Mozambique agreed to continue their established defence and security alliances, which by implication would include military support in the form of equipment, personnel, advisers and training. Russia’s consent to such an agreement was, therefore, not too difficult given that the groundwork and previous agreements were already in place and a military support and aid package could easily and quickly be facilitated.

The African defence news portal, defenceWeb, reported in September 2019 on the arrival of Russian military equipment in Nacala which included a Mi-17 helicopter. This confirmed previous reporting in the Jamestown Foundation Terrorism Monitor that Russia and Mozambique signed a resolution that Russian military vessels would be allowed to dock in Mozambican ports as of late August.

Shortly after, reports appeared in local media of Russian military equipment that was observed in areas such as the Nacala port, Nampula province, Mued, and Palma (Cabo Delgado) – one of the areas previously targeted by the Ansar al-Sunna insurgency. This area is also the location of the Cabo Delgado offshore liquid natural gas operations.

Mozambique faces vast economic challenges to ensure stability for successful developments in prominent sectors. The reputable forecast publication for international economists, FocusEconomics, rates Mozambique in second place in its list of the world’s poorest countries for the period 2019 to 2023, despite linking it to an optimistic economic growth projection of 4%.

Mozambique is historically dependent on international aid packages to ensure economic and political stability among the broader population. Increased international assistance is thus understandably a priority for the current government which seeks re-election in the upcoming elections to continue with its political and economic vision and agenda.

Stability in especially the northern province remains volatile and challenges centre around the ongoing threat from insurgents in the north, where the population still reels from the devastating damage caused by two severe cyclones earlier in 2019. The adverse weather patterns caused extensive destruction of infrastructure, agriculture, health services and education facilities and left the survivors with an unprecedented fight for basic survival.

Restoration of the affected areas, even if only to the levels of livelihood as it was before the cyclones hit the region in April 2019, will be costly and might take decades to achieve.

The discovery of Mozambique’s hidden debts had a devastating effect on its economic performance as many donors and investors withdrew from the country. This resulted in its currency losing about a third of its value, with GDP growth declining from about 7% a year to less than 3.5% a year. The situation has placed Mozambique in a tight position as it had to renegotiate debt repayments and restructure its debt with its creditors, while accepting stringent new conditions from the IMF and World Bank.

The country has, however, negotiated leverage insofar as it has abundant and sought-after mineral, oil, gas and petroleum resources. Various international projects had already been established and are attracting investors eager for lucrative economic prospects.

Mozambique is geographically well-positioned as the gateway to landlocked Southern African Development Community (SADC) countries such as Malawi, Zambia and Zimbabwe, ensuring its position as a regional strategic partner to support African countries’ vision for continental economic integration.

Amid international isolation and sanctions as a result of its involvement in Ukraine and its policies on Syria, Russia has embarked on a drive to establish and expand its position as a major-league global economic power. In doing so, Russia capitalises on its unique ability to adapt to changes in any economic environment, thereby gaining a foothold in dictating the future direction.

Furthermore, Russia seeks to achieve specific economic objectives through its strategic partnerships as it must augment its ability to be a frontrunner in future high-end technology. The country has also identified strategic partner possibilities on the African continent to achieve its strategy of repositioning itself globally, and in this context, Mozambique is an ideal associate. The discovery of the rich energy resources in the north of Mozambique served as the catalyst for the drive by both countries to strengthen their longstanding relations.

The increased international interest and investment in Mozambique’s offshore gas reserves came at an opportune time to accelerate economic growth and prosperity in the country. However, the country’s tight economic position and the evolving instability resulting from the extremist insurgents in Cabo Delgado Province (where the offshore gas reserves were discovered) have limited Mozambican manoeuvrability in negotiations to ensure the most favourable terms for developing the gas sector.

Instead, the government remains under severe domestic pressure to address the increased insurgency in the north. At this stage, the militants’ tendency to swiftly change their aims and objectives dictates that all role-players in the area (including the oil and gas companies) should closely monitor developments and maintain situation awareness and regularly review their security posture.

Against this background, Russia’s enhanced role in the security arena has the potential to become the game-changer in addressing the volatile and unpredictable security situation in Cabo Delgado Province. Irrespective of the presence of the Russians, the demand for high-level security measures remains evident. Sadly, those left exposed are the communities living in Cabo Delgado. DM