Helen Walne’s ‘Underwonder’ World: Like falling into a painting, again and again 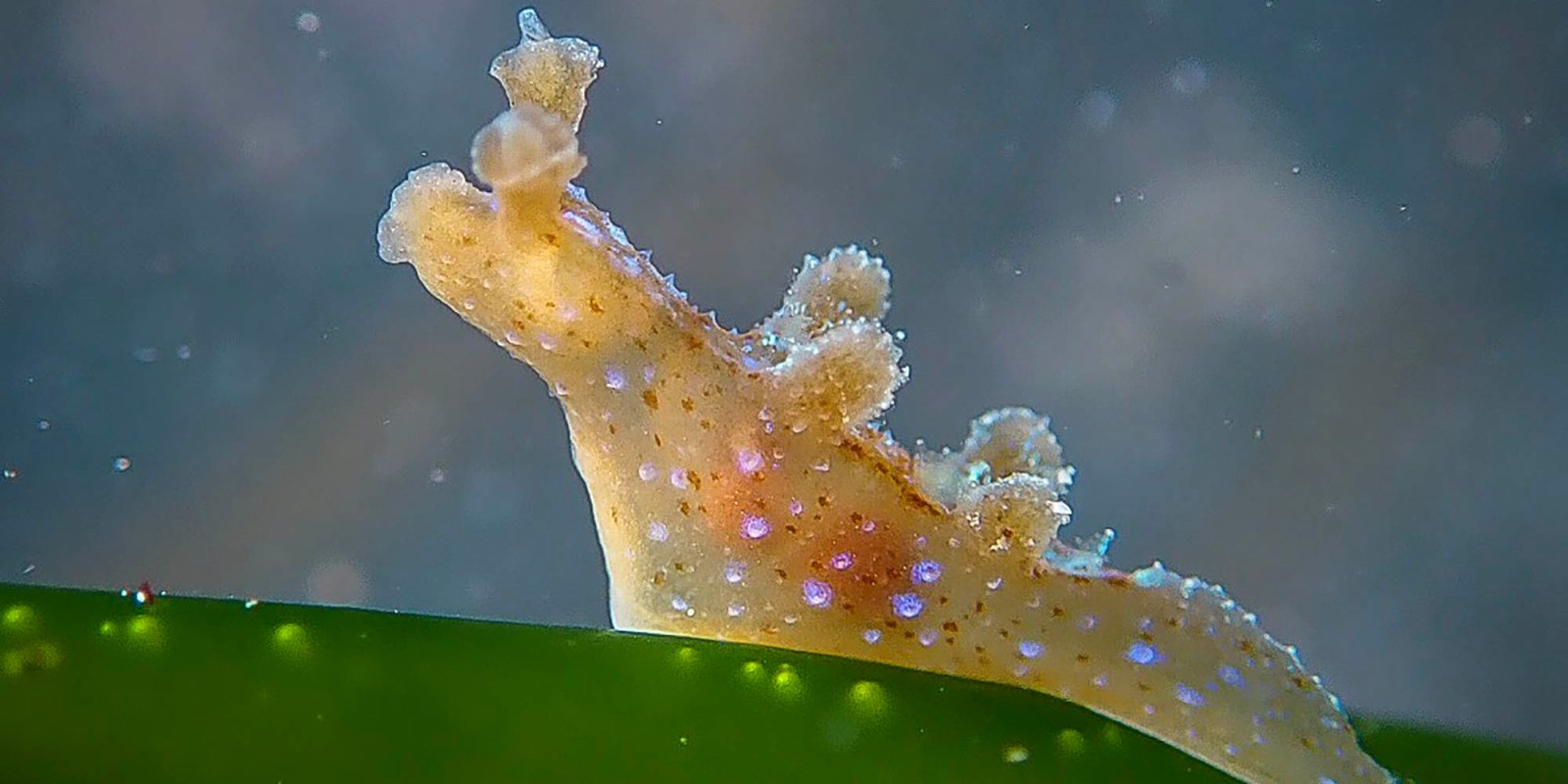 "At the end of the cul de sac, in the cooling evening air, Cynthia stopped and gazed across the valley, thinking of stardust and blueberries, and listening to dogs being called to dinner, and wondered if she’d made good choices. *** This exquisite Iridescent Nudibranch was one of a clutch we found in a natural pool this week."

Helen Walne’s Instagram account is a kaleidoscopic record of the ‘underwonder’ – Walne’s own description – of the icy waters just off the coast of Cape Town. Her photographs, taken on a ‘very non-fancy’ Olympus Tough TG5, with a wide-angle lens, are trippy missives from an impossibly iridescent landscape. That it exists at all seems to require the viewer to suspend disbelief, so fantastical are the scenes and critters Walne’s lens finds. The story of Walne’s colourful obsession and her generously shared wonderment is one rooted in loss.

One of the most wondrous places on the planet right now is the Instagram account of local writer and freediver Helen Walne.

What distinguishes the South African’s creative work from the many other underwater photography accounts is the extension of her observational skills from the eye to that mysterious place in the brain where images become stories. Her captions are often tiny narratives about the “characters” she encounters – starfish and sea slugs and octopuses and anemones who, in Walne’s imagination, bear the names of luckless baby boomers, some of whom are loud or louche, while others are shy and vulnerable.

“I sometimes feel bad about anthropomorphising the creatures I photograph,” she says. “They deserve better. They’re often universally embarrassing situations, so maybe I’m trying to defuse our petty existence. I’ve been struggling to write for a good few years, so maybe this is my way of having fun again with words.

“I think somehow the captions help people who don’t understand the sea, though, or who don’t get to see the worlds within it, who can’t notice what’s down there because they don’t go there. I often make the nudibranchs and other colourful animals into decadent characters. How can one not, when they appear to be dripping in jewels and boas and have audacious hairdos?”

Walne, who works as a copy editor, wrote an award-winning newspaper column for many years and is also the author of one of South Africa’s most lyrical and poignant memoirs, The Diving. It is a story of Walne’s relationship with her beloved brother, who committed suicide.

“After my brother, Richard, drowned in the ocean, and after I’d written The Diving, I became drawn to water. It was almost a compulsion. Jung would have a field day.”

First she swam in the Sea Point Pool, working herself up to 80 lengths at a time. Afterwards, she would hang over the railing and watch the sea. She became hypnotised by it and began short, inexpert forays into tidal pools, where she became entranced with anemones. She borrowed her husband’s action camera and began photographing colours underwater. She joined a group that swam across Camps Bay every Sunday but often found herself trailing behind to photograph the light streaming through the kelp or the way human bodies moved through water.

Her reverence for the sea grew and she no longer wanted to “use” it only to exercise. She bought second-hand gear and became slightly more adventurous, though she remained nervous of the open sea and only went in when it was calm. She was always alone. Most of the time, she couldn’t identify what she was seeing underwater.

“All I knew was that the cold water calmed me, that the light underwater was sublime and the colours on the rocks were better than anything Georgia O’Keeffe would have dreamt up. It was like falling into a painting, again and again.”

Then, one Sunday, tired and cold from a Camps Bay swim, Walne had a scare. “I got too brave,” she says, about her solo swim near Oudekraal.

“I was also wearing a weight belt that was two times too heavy (rookie mistake) and hadn’t looked at the tides or the swell or the entry and exit point. Once I was out, the swell picked up, the visibility was almost zero and my weight belt was pulling me under. I panicked. Ripped off my flippers, in a desire to be a land creature again, which just made it worse. Got bashed against a rock. And then screamed for help. I thought I was going to drown. Thankfully, two strapping divers were on the beach and managed to haul me out onto the rocks. When the NSRI boat came to see what was happening, I was too embarrassed to give them my surname. My brother had drowned in that very same spot. What would they think of us?

“Now, it’s clear the incident was some sort of strange, subconscious exorcism of the ghost of my brother’s death and all the years I’d spent in quiet panic. It was as though all of that obsessive swimming and the compulsion to be in water had been leading up to that point.”

She wised up, did a freediving course, met people who identified the underwater creatures she was meeting by names other than “Gerald” and “Janine”, got better gear, and began bringing alien scenes to the surface to share. Now she is “more afraid of skulking men on the beach” than she is of the ocean. She dives almost daily and the repetitive exposure has led her to trust the knowledge she’s amassed and trust that the sea is not out to get her.

“I also know my limits. I won’t get into a rough, boiling sea if I don’t feel comfortable. I’m still nervous of bumping into a Great White but sadly, with their numbers dwindling, that probably won’t happen.”

Cape Town is not widely regarded as a prime diving spot, which is partly why she likes to share her photographs on social media.

“We have some of the cleanest, most colourful reefs, and they are teeming with life. I feel like I am diving for treasure to bring back for others. I am convinced that the biodiversity in Cape Town marine protected areas is equal to the city famed terrestrial biodiversity.”

She hopes that if people see what’s there, under the water, “there will be a greater appreciation for why we need to conserve these places beyond just refusing the occasional straw”.

The quirky way Walne brings the gaudy lifestyles of flashy reef creatures to the surface via social media should not for a minute make the viewer underestimate the unassuming intelligence at work here. Walne is a gentle rioter and an incisive social critic. She does this simply by being an engaged observer. DM

A short movie about Helen’s Underwonder is available here https://vimeo.com/254017743