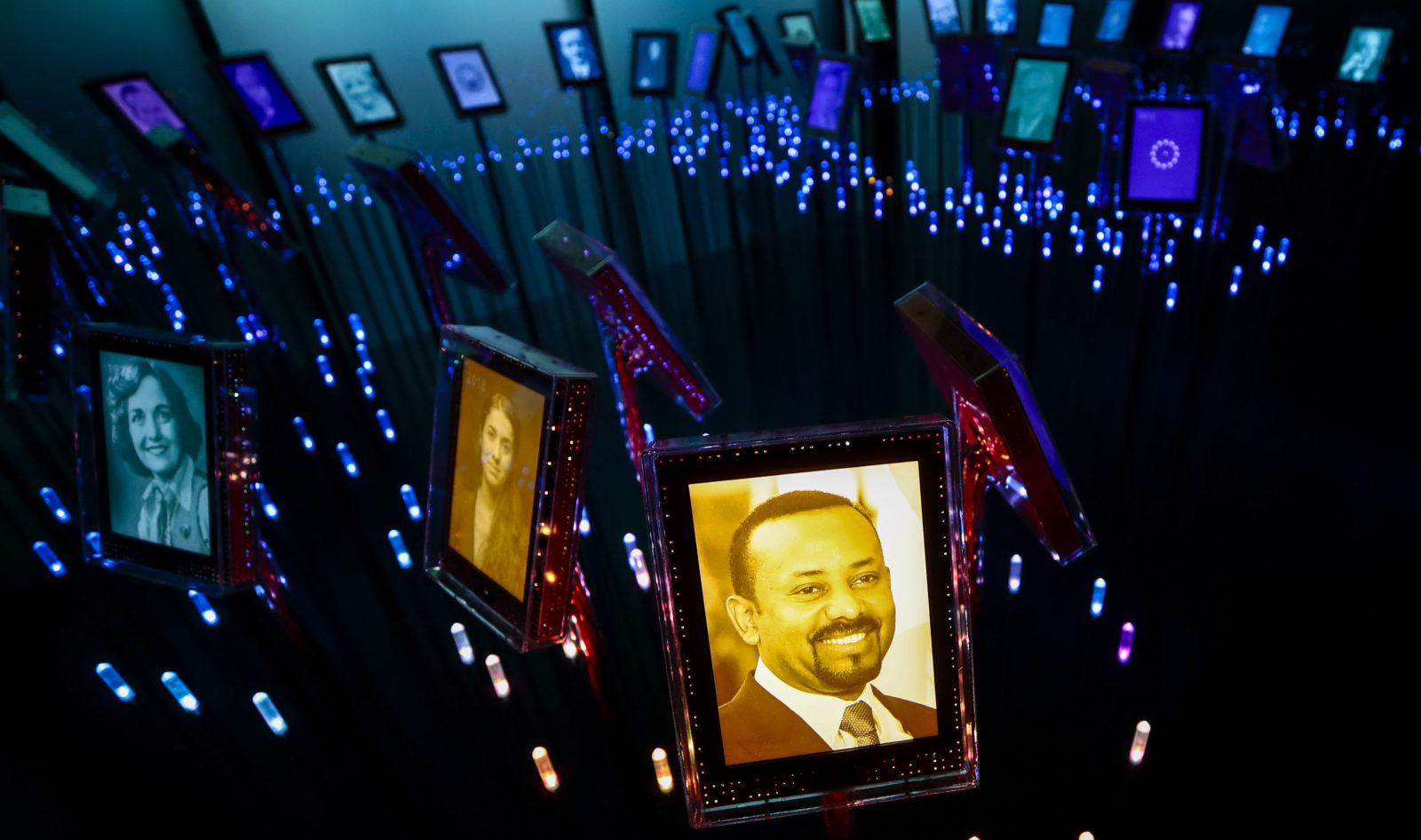 Ethiopian Prime Minister Abiy Ahmed Ali has won the 2019 Nobel Peace Prize, though he still faces major challenges in fully achieving the domestic and regional peace and stability for which he has been honoured.

Announcing Abiy Ahmed’s win, Berit Reiss-Andersen, chair of the Nobel committee in Norway, acknowledged that some might see awarding of the prize as premature, particularly in light of recent flare-ups between ethnic groups within Ethiopia. But Reiss-Andersen said Ahmed was being recognised for working towards peace and as an encouragement to continue doing so.

“The Norwegian Nobel Committee hopes the Nobel Prize will strengthen Prime Minister Abiy in his important work for peace and reconciliation,” said Reiss-Andersen.

This has often been the approach of the committee when deciding who to honour.

And the committee is correct in noting that Abiy’s rapprochement with Ethiopia’s erstwhile bitter enemy Eritrea has not been fully reciprocated by that country’s leader, Isaias Afewerki, whose people have yet to earn a “peace dividend”, as one analyst put it.

At home, Abiy’s dramatic liberalisation of the country’s authoritarian politics has opened a Pandora’s box of ethno-nationalist, sometimes violent, forces.

Nonetheless, the award has been widely welcomed as richly deserved by Abiy for his mustering of the courage to embark on radical reforms after being unexpectedly elected to leadership in April 2018.

Though a member of the Ethiopian People’s Revolutionary Democratic Front (EPRDF), an ethnic and regional coalition which has ruled the country since the overthrow of the brutal Marxist-Leninist dictator Hailemariam Mengistu in 1991, Abiy is not a member of the Tigrayan ethnic group that has dominated the EPRDF. He is an Oromo, the largest ethnic group.

He took over after a series of popular protests shook the ruling party’s confidence in its ability to govern and his predecessor Hailemariam Desalegn abruptly resigned.

With a fresh, broader view of the country’s problems, Abiy quickly set about launching a raft of ambitious reforms, as Reiss-Andersen detailed in his citation for the prize.

“He spent his first 100 days in office lifting the country’s state of emergency, granting amnesty to thousands of political prisoners, discontinuing media censorship, legalising outlawed opposition groups, dismissing military and civilian leaders who were suspected of corruption, and significantly improving the influence of women in Ethiopian political and community life.”

Regionally, Abiy’s main task was to secure peace with Eritrea, once part of Ethiopia, though always having a separate identity, and which finally found expression when it seceded after the overthrow of Mengistu.

Rising tensions between the two states – and particularly between their leaders, Afewerki and Ethiopia’s then-prime minister Meles Zenawi, both Tigryan and believed to be blood relatives – exploded in a bloody border war in 1998, which lasted until 2000. After that, Ethiopia and Eritrea were locked in a hostile stalemate, accusing one another of backing each other’s rebel forces.

Three months after taking office Abiy took the initiative by offering peace to Afewerki and visiting Eritrea’s capital Asmara, a move greeted enthusiastically by most civilians of the two countries who had suffered in hostilities that often divided families.

Abiy’s unorthodox and unbureaucratic style came to the fore in his almost-solo initiative to patch up the quarrel with Eritrea. In July this year, for instance, the Ethiopian foreign office reportedly only learned their prime minister was visiting Eritrea for a second time after seeing the news on Eritrean social and local media.

In the 15 months since Abiy’s peace initiative, some Ethiopians and Eritreans have been disappointed that Afewerki has not reciprocated much of the goodwill. A few analysts suspect the Eritrean leader is more appreciative of Abiy having loosened the grip of the Tigrayan faction of the EPRDF on Ethiopia’s politics than for the chance of peace.

Domestically, Abiy’s liberalisation of the repressive politics of his predecessors has unbottled many ethno-nationalist forces. These came to light dramatically in June this year with a series of assassinations of top officials in the federal capital Addis Ababa, as well as in Bahir Dar, seat of the government of Amhara state, the country’s second-largest federal region. In Amhara, gunmen killed regional leader Ambachew Mekonnen and two of his advisers.

A few hours later, a bodyguard reportedly shot dead General Seare Mekonnen, chief of staff of Ethiopia’s military, along with a retired officer. The assassinations were blamed on an aggressive Amharic nationalist leader who was later killed in a shootout with police.

The International Crisis Group noted that while Abiy’s reforms were long overdue, they had come at a cost: the weakening of unity in the EPRDF, an alliance of four regional parties “that has controlled all tiers of government from the federal to the village level since 1991 and routinely used repressive tactics to sideline challengers”.

The Belgian-based conflict-resolution NGO continued: “Security reform in particular altered the balance of power in the central government by reducing the number of top officials from the Tigray People’s Liberation Front (TPLF), one of the EPRDF’s four component parties, representing the Tigray minority that had long dominated the ruling coalition and security apparatus.

“One upshot is that ethno-nationalist parties are presently on the rise in Ethiopia’s regional states, pushing strident agendas and presenting themselves as true defenders of communal interests. The EPRDF parties – themselves created to govern autonomous federal states and represent regional demands in the capital, as per Ethiopia’s ethnic federalist system – now feel compelled to outflank them.

“The heightened ethno-nationalist rhetoric contributes to intercommunal violence, which over the past 18 months has reached levels unprecedented in many decades in Ethiopia.”

The ICG said these centrifugal forces were most evident in the two most populous regional states, Amhara and Oromia, where ruling EPRDF regional members were facing strong challenges from more nationalist and ethnically divisive parties.

The ICG’s senior Ethiopia analyst Will Davison, responding to the Nobel announcement, said: “Prime Minister Abiy Ahmed’s bold leadership has helped drive through positive changes in Ethiopia and achieve rapprochement with Eritrea. But there is a lot of work to do to achieve a new domestic political settlement between fractious actors, and there are also major obstacles to advancing the Eritrea peace process, suggesting that Abiy’s hardest challenges lie ahead.

“Prime Minister Abiy Ahmed’s assertiveness was a critical factor in the rapprochement with Eritrea, but the positive response from Eritrea’s President Isaias Afwerki was partly due to a belief that Abiy’s arrival marked the demise of Isaias’ arch-enemies within Ethiopia’s ruling coalition.

“Ethiopia had the most people internally displaced by conflict in the world last year, which indicates that the transition Prime Minister Abiy Ahmed leads is very much a work in progress. The same is true about the peace process with Eritrea, as there remain major obstacles to a full normalisation of relations.

“The peace deal unfroze diplomatic relations, reopened telephone lines, and has allowed some travel between the two countries. But key border disputes are unresolved, and Eritrea remains without constitutional government, so there has been no peace dividend yet for its long-suffering citizens.”

In a recent article, Semir Yusuf, senior researcher at the Institute for Security Studies in Addis Ababa, noted that the Tigryan Peoples Liberation Front had tightly controlled the coalition and the country through a highly centralised state.

“As that centre slackened when the Tigrayan People’s Liberation Front’s power over government diminished – to which ethnic movements partly contributed – the genie was unleashed and political control began to wane,” noted Semir. “In the absence of a strong state willing and capable of ensuring security throughout the country, the aspirations of different ethnic groups have led to intense clashes.

“Since Abiy took office, Ethiopia has been rocked by several unbridled ethnic conflicts. Constituencies have been mobilised to demand self-determination and proportional political representation. Violent clashes have erupted in different parts of the country, costing many lives and causing massive displacement of ethnic minorities. As stability has deteriorated, government has failed to repackage Pandora’s box.”

But, of course, the game is not yet over. Abiy has only been in office for 18 months and many changes have been made. Controlling them and preventing the country flying apart will be his greatest challenge.

Abiy was among 301 Nobel Peace Prize nominees, which included 223 people and 78 organisations. He was the bookmakers’ second favourite, after Sweden’s teenaged climate activist Greta Thunberg. DM