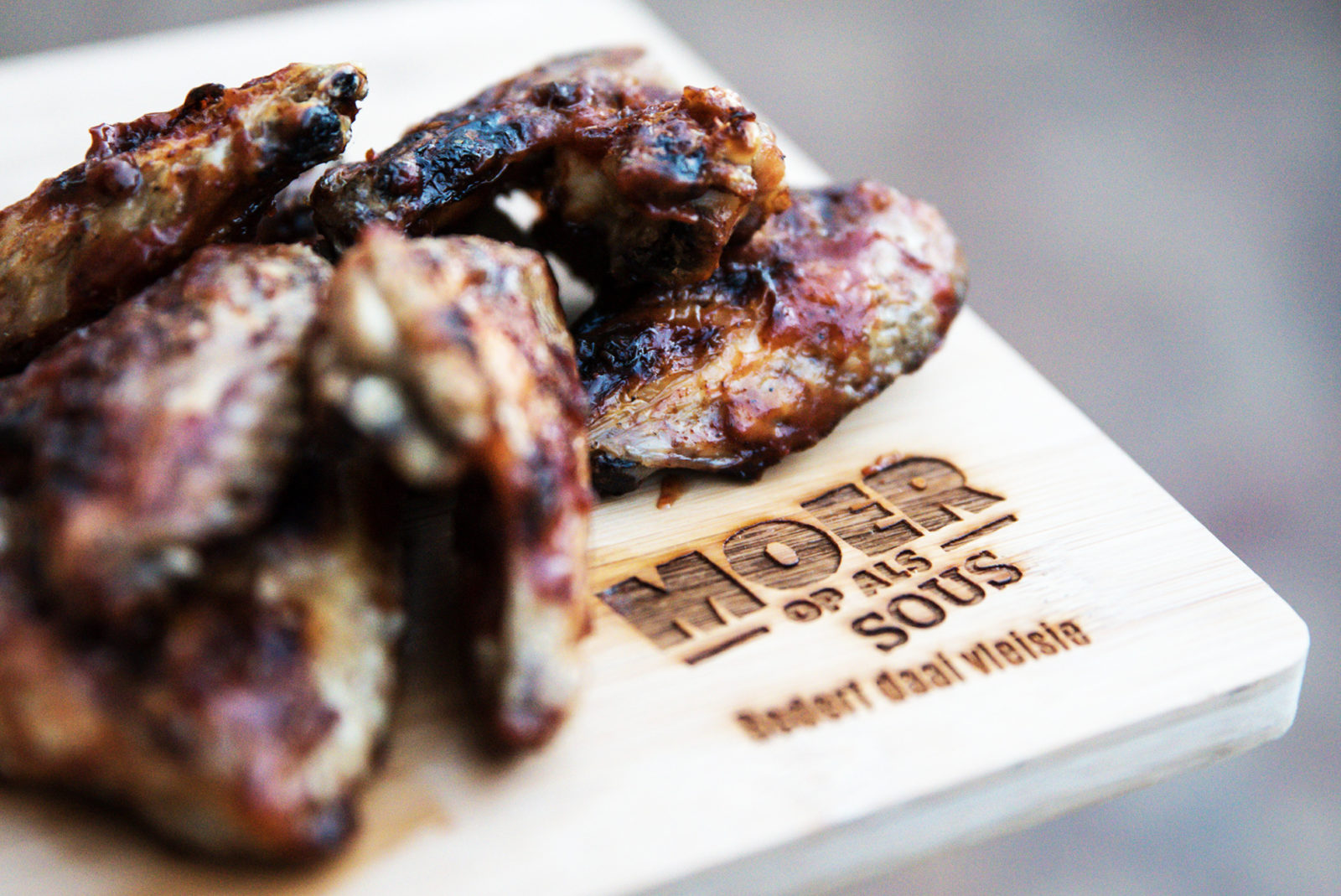 What began as a homemade braai sauce in the kitchen has become a national brand… with more products on the way.

Maybe I’ve been living in a self-absorbed cotton candy bubble, but it recently came to my attention that not everyone braais the same way.

Last weekend, Neels Kleynhans invited me around to his place to try out his Moer Op Als (basically “put” – a polite translation – on everything, but way more eloquent in Afrikaans) sous/sauce, and his Moer Lekka Bier (again, blandly lost in translation – very nice beer?). “I know the way you write your stories,” he said. “Come and experience it for yourself.”

And so it came to pass I found myself in a suburban backyard with a bunch of (mostly) strangers, some of whom were invited for the occasion, and others who had invited themselves. This is because Kleynhans is known among his friends as a braai genius; if he posts on social media he’s making a fire (which he does more than only on Sundays, and has the stockpile of wood to prove it), the texts start coming in… “we’re on our way…” Now I am inside that circle, I too can invite myself anytime.

First things first: Kleynhans poured me some of his beer, and another SAB brand for himself. “Wait, what?” I said. “How come you’re not drinking your own beer?” I asked suspiciously.

Simple, he replied – that would be drinking his profits. Which makes sense. “We’ve all got our own tastes. I like my beer but I like this one as well,” he added.

The beer is the latest addition to what is a growing range of braai-complementary products which began with the sauce last year, and also includes a clothing range. Spices and a couple more exciting items are on their way in 2020.

The story is an inspirational one; Kleynhans pursued professional photography more or less by chance – and with an instinctive skill – and the sauce came about in a similar way. “Making my own sauce was never a business, in my mind. It was a hobby; everybody makes their own sauce at home,” shrugs Kleynhans.

He is not wrong. Who hasn’t flung together some chutney, tomato sauce and other bits and slathered it on the wors? The “moer op als” name caught on with his mates – not yet in capital letters. “My friends would say ‘listen, we’re coming to your house and we want moer op als on our meat’ and I’d say ‘I still have to mix it’. They’d say if I didn’t have it, they weren’t coming,” says Kleynhans. “I started making it in a bucket and putting it into glass jars – and then they’d steal the bladdy stuff!”

Eventually the friends did the right thing and offered to buy it. From there the manufacturing process – with labels with ingredients, allergens, sell-by dates and all those health and safety requirements – was put into motion and Moer Op Als was retail-ready in January 2019. Within eight months it became self-sustainable, and the product is available in Spar supermarkets as well as some butcheries. A social media following has been instrumental in the marketing of the product, and Kleynhans’s email address and contact number are on every bottle of what is now a trademarked brand.

Moer Op Als is available in a 375ml bottle – because that’s the size that will fit in the fridge door. Brilliant idea, I say. That awkward bottle which doesn’t fit gets put on the top shelf, other things arrive in front of it, it gets pushed to the back and forgotten. Tell me this doesn’t happen to you. Alternatively, for the serious consumer (like Kleynhans at home), there are five-litre bottles.

“It’s about the spices,” says Kleynhans of his product. “I think anybody can make a sauce, but it’s about the spice. You know what? You get different beers, different wines – change a little bit of this, a little bit of that and it makes a big difference in the taste. Same with sauces. I will never bad-mouth any other products, that’s a massive rule I have. It doesn’t taste like any other sauce, it just works.”

Next came the Moer Lekka Bier, a lager brewed in Mossel Bay. “I like my beer as everybody knows,” says Kleynhans. “I said to my wife, Nelani, you know what? ‘Moer lekka bier’ sounds brilliant and I want it. So I approached a few people in Cape Town but they were not interested. The brewery in Mossel Bay said they’d make something the way I enjoy it, and not a copy of anything else.

“It’s craft, so it’s a bit more expensive but it’s doing well. Give it a go.”

Kleynhans says he definitely wants to add a spice to his product range. “I’m very salt sensitive and for me meat has a natural salt, therefore the MOA is low in sodium,” he says. “Most spices are too salty. When I eat something, it must have a rounded, even taste.”

Like the sauce, the spices will be available in two options – original and peri-peri. “I’m not a peri-peri fan but you’ll taste it now, it’s not too hot,” says Kleynhans. “I’m going to make ‘moer lekka vlertjies’ (chicken wings) and you will eat it,” he promises.

Interview segment concluded, it was time to braai (verb). First up was “dirty steak” which Kleynhans cooks directly on the coals of his fabulous braai (noun), which has a separate section where wood is kept burning to ensure a steady supply of coals all afternoon. The Kleynhans style is “plankie braai” – each meat cooked, cut and served on a wooden board, to be eaten before moving on to the next. No salads. Just frequent trips to the kitchen for more drinks.

The story behind the dirty steak – so named for obvious reasons – is one fine day at the butchery, Kleynhans saw wet biltong. This evoked a childhood memory of his grandfather (who had a hunting farm in Zimbabwe) putting wet biltong directly into the fire. “He scratched off the ash and we ate it. It was unbelievable,” Kleynhans recalls. “I said to Nelani, maybe I can do this with steak.”

There was some trial and error and a bit of swearing but he’s perfected it now.

“We always do the dirty steak first, before we get too wasted to appreciate it properly,” he laughs. “For me, steak must be medium to rare – that’s the rule, end of story. All my friends have been converted now. You’re going to love it.”

And thus the afternoon passed with a procession of meats – dirty steak, seasoned with salt and pepper and a drizzle of olive oil, and sliced; chicken wings with MOA peri-peri (true to Kleynhans’s word these were mildly spicy and didn’t cause pain); pork rashers with a light squeeze of lemon juice; and some truly excellent wors (Kleynhans’s secret is to not overcook it, leaving it a tiny bit pink in the middle, and utterly juicy).

I noticed Kleynhans only brushed the meat with the sauce near the end of cooking, rather than using it as a marinade. “Marinade tends to blacken the meat during braaing,” he explains. It’s recommended you apply it on the second-last turn for the best results. It’s so easy, even a child could do it…and at least one does – Neels and Nelani’s two-year-old, cute-as-a-button Hunter has his own tiny custom-made braai, to braai just like Pappa. DM