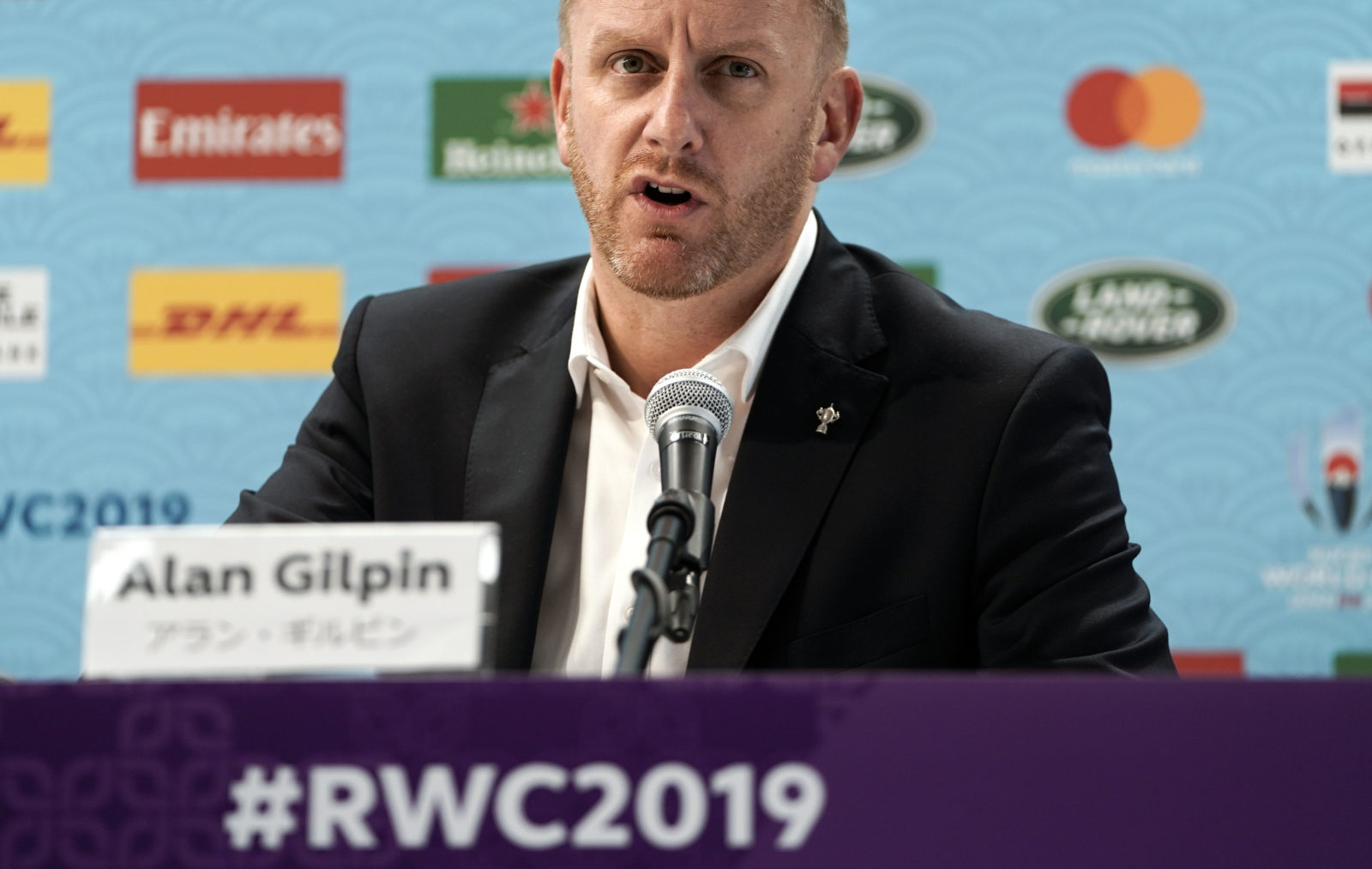 World Rugby Chief Operating Officer and Tournament Director Alan Gilpin announces the predicted impact of Typhoon Hagibis on this weekend's Rugby World Cup 2019 pool matches during a news conference in Tokyo, Japan, 10 October 2019. Gilpin stated that the Pool B match between New Zealand and Italy, and Pool C match between England and France are to be cancelled. The final decision on 13 October matches will be made in the morning on the day. EPA-EFE/KIMIMASA MAYAMA

The integrity of Rugby World Cup 2019 has been tarnished after the organising committee were forced to cancel two matches due to the arrival of ‘Super Typhoon’ Hagibis on mainland Japan.

England versus France and New Zealand versus Italy, both scheduled for Saturday in Yokohama and Toyota respectively, were called off for safety reasons as the powerful typhoon with winds gusting up to 270km/h is set to make landfall.

Although meteorologists expect wind speeds to be lower over land, heavy rain and gusts that could rip up telephone lines and blow cars off the road have forced World Rugby to take the drastic step.

Cancelling a few rugby games in this context is a small price to pay, especially when measured against the massive destruction the Hagibis is expected to wreak across the main island of Honshu.

But in terms of contingency planning the entire episode is an embarrassment for World Rugby, from the original scheduling to stage RWC 2019 in typhoon season, to no back-up plan to move games to other venues at short notice.

All four sides affected by the cancellations have been awarded two log points each. The decision has ruined France’s chance of topping Pool C, as they went into the weekend needing to beat England to take that honour.

It’s the first time in the 32-year history of the tournament that games have been cancelled.

Although Italy was all but eliminated already, they still had a mathematical chance of making the play-offs. But it would have required a win over the All Blacks while preventing the reigning world champions from securing a bonus point – a highly unlikely scenario considering that they have never beaten New Zealand in 14 attempts. The All Blacks average winning score over Italy is 59-9.

There is also a possibility that Sunday’s crucial Pool A clash between Japan and Scotland in Yokohama will be cancelled as well. Even if Hagibis has passed, the damage to infrastructure could make the match unplayable.

That would have massive ramifications for the tournament as both sides currently could still qualify for the quarter-finals and both could be eliminated depending on Sunday’s result.

If the fixture is cancelled Japan will move to 16 log points and go through to the quarter-finals. Ireland, the other team in the race for play-offs in Pool A, meet Samoa in Fukuoka on Saturday. That match is currently scheduled to go ahead.

Ireland is second in Pool A on 11 points. One more log point from the Samoa game would be enough if Scotland don’t have the chance to play on Sunday. In that situation the two log points awarded for the cancellation wouldn’t be enough for the Scots to advance.

“This is a complex and dynamic situation which we have been monitoring extremely closely with the assistance of our weather information experts,” tournament director Alan Gilpin said on Thursday.

“We are now in a position to accurately predict the likely impact of Typhoon Hagibis on Rugby World Cup fixtures this weekend.

“While making every possible effort to put in place a contingency plan that would enable all of Saturday’s matches to be played, it would be grossly irresponsible to leave teams, fans, volunteers and other tournament personnel exposed during what is predicted to be a severe typhoon.

“As a result, we have taken the decision to cancel some matches in order to ensure the safety of all involved. It is the right thing to do, and comes with the support of all stakeholders, including the teams.

“We fully appreciate that England, France, New Zealand and Italy fans will be disappointed, but we trust they will appreciate that their safety must come first. They will be entitled to a full refund on their match tickets.

“Our message for all fans in Japan for Rugby World Cup is to heed all official advice, stay indoors throughout Saturday and do not attempt to travel on the day.”

While the possibility of typhoons affecting RWC 2019 was always a consideration, it has massive financial implications for World Rugby.

Not only do up to 200,000 match tickets have to be refunded if the third game is cancelled, but the broadcasters committed to showing the games also might seek compensation.

For Japanese rugby it would be a major blow if the match against Scotland did not go ahead because the viewership figure was expected to be one of the highest in history. Over 25 million people watched Japan’s previous match against Samoa.

But there is a much bigger issue at play in terms of the tournament. At least three teams in quarter-finals won’t have fulfilled their Pool fixtures. They have not earned the right to be in the position they are in and that is fundamentally wrong.

So far, none of the cancelled games will change the identity of the teams progressing, but if Scotland is eliminated due to a cancellation (at this stage that is not the case) they would have lost a legitimate chance to play for the right to be in the last eight.

At this stage it is unclear whether the Scottish Rugby Union could seek compensation from World Rugby if their clash against Japan was cancelled, thus eliminating them from the tournament. But as they signed a competition agreement in which the rules were laid out, a lawsuit is unlikely.

But even if there were a lawsuit at some future date, it would not compensate the players and coaches who have been denied a legitimate chance to contend for the title through no fault of their own.

New Zealand, France and England have played one fewer match going into the knock-out stages of the most important tournament on the rugby calendar. That in itself has implications.

They have played less rugby; therefore they are less fatigued in a gruelling tournament that should require playing seven games in six weeks to win it.

Those three teams have one fewer game in which players could be injured, or commit an act of foul play that could see a crucial player suspended for the business end of the campaign.

It has tipped the scales of fairness away from the likes of South Africa, Wales and Australia.

World Rugby could do little about the weather, but they could have done a lot more about the planning, timing and contingency to moving the games to other venues than they have done. DM