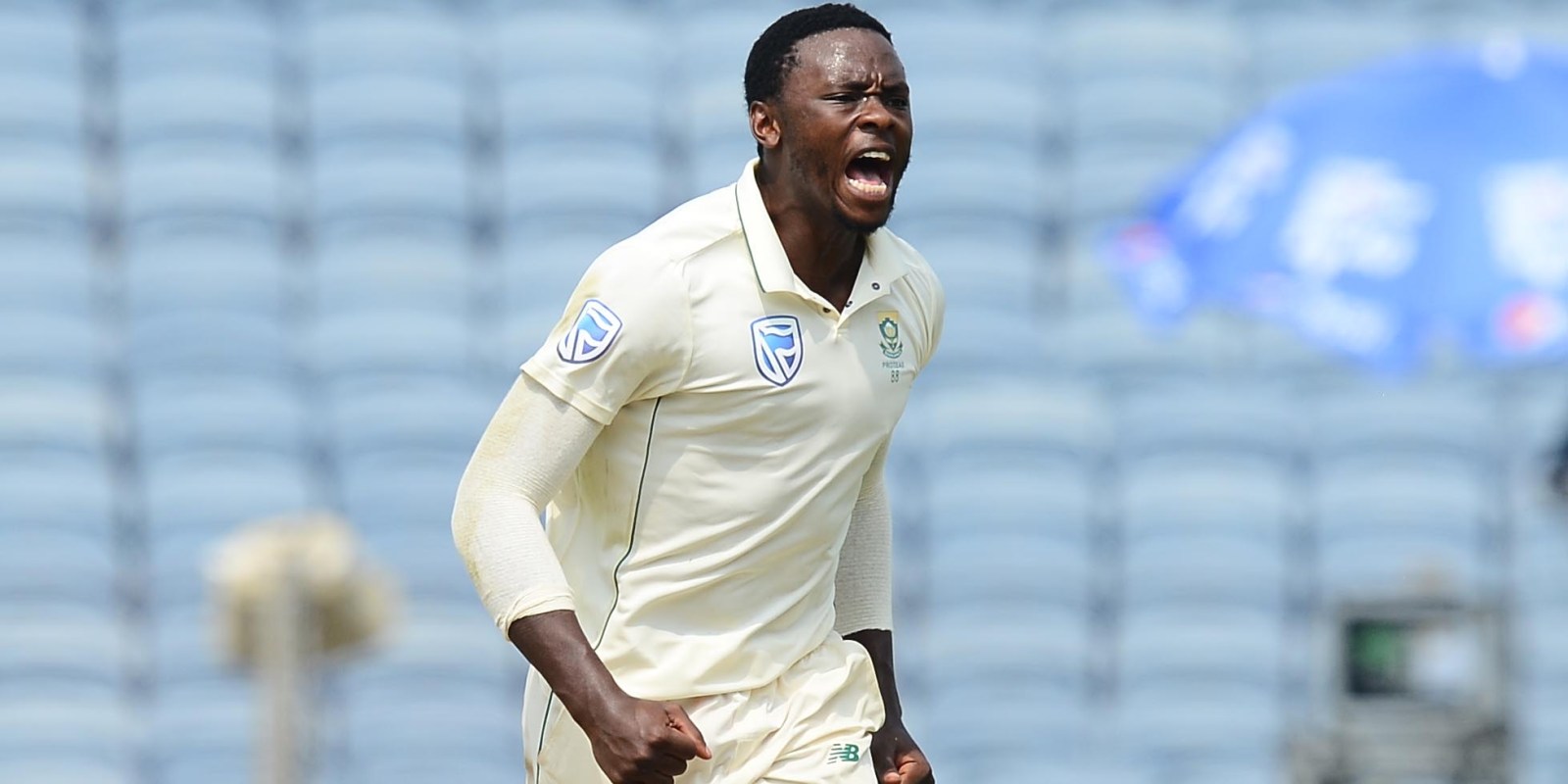 Kagiso Rabada of South Africa celebrates the wicket of Cheteshwar Pujara of India on day one of the second Test match between India and South Africa at Maharashtra Cricket Association Stadium in Pune, India. (Photo: Isuru Sameera Peris / Gallo Images)

Kagiso Rabada fought what must have felt like a lone battle at times against India’s top order on day one of the second Test in Pune on Thursday, taking the only three wickets to fall.

Big South African right-arm quick Kagiso Rabada knows conditions in India are not purpose built for his strengths, but he didn’t shirk his duty as he bowled 18.3 overs in tough conditions against an Indian batting lineup that has few chinks in its armour.

Opener Mayank Agarwal continued to torment the South African bowlers, scoring a brisk 108 to add to the 215 he scored in the first Test in Vizag last week.

But collectively the South African bowlers, including paceman Anrich Nortje on debut at the expense of Dane Piedt, did not make the most of conditions that offered assistance.

There was some moisture about in the morning and good carry and bounce off the wicket. Compared to the road the Proteas endured last week, these were conditions where Rabada could have done with better back-up.

India’s opening pair of Agarwal and Rohit Sharma rode their luck in the morning with some edges that found gaps and a few wafts that beat the blade. But that’s not unusual on the first morning of a Test.

The problem was, that Rabada aside, the other two seamers failed to maintain the pressure consistently.

Vernon Philander was too straight and couldn’t extract much from the surface. Nortje was quick at times, bowling several deliveries over 147km/h, but on the whole bowled too full.

He quickly became acquainted with the maker’s name on Agarwal’s blade, it was flourished so often as yet another crisp drive sped to the boundary.

In the 11th over Nortje gave a hint of what he is capable of when a short ball reared quickly and hit Agarwal on the helmet. After the standard concussion test, the Indian opener continued, if anything, more focused than before. The very next ball Agarwal drove a 148km/h delivery through cover for four.

The right-arm quick would probably have preferred a Test debut at the Wanderers or the Waca rather than Pune, as he travelled for 60 runs in 13 overs.

Rohit, scorer of two centuries in Vizag, made 14 before Rabada found the edge with an angled delivery that held its line. Quinton de Kock bagged the catch to dismiss Rohit inside an hour. In the first Test the Proteas endured his company in the middle for more than eight hours.

Unfortunately for South Africa, that was as good as it got through the remainder of the morning session and throughout most of the middle session as Cheteshwar Pujara and Agarwal put on 138 for the second wicket.

Proteas spinner Keshav Maharaj, who endured endless pain in the first Test, appeared to be low on confidence and the batsmen picked him off easily at times.

The slow left-hander shouldered a heavy workload and bowled 29 overs without a wicket, going for 89 runs in the process.

It was another fiery spell from Rabada just before tea that eventually earned the breakthrough as he had Pujara caught at slip by Faf du Plessis for 58.

Yet again, though, South Africa couldn’t make the breakthrough count with another quick wicket as Virat Kohli set about atoning for his mediocre form in the first Test.

By stumps the India skipper was unbeaten on 63 and ominously poised to pile misery on the SA bowling attack on day two.

Shortly after tea though, the indefatigable Rabada picked up Agarwal’s prized scalp with another good ball that rose off a length, inducing the edge. Du Plessis snapped up a good catch again.

Early wickets on day two will keep South Africa in the contest, but if Kohli is allowed to build on his hard work on day one, the Proteas are in trouble. DM