Dispute over the occupation of RDP houses﻿ 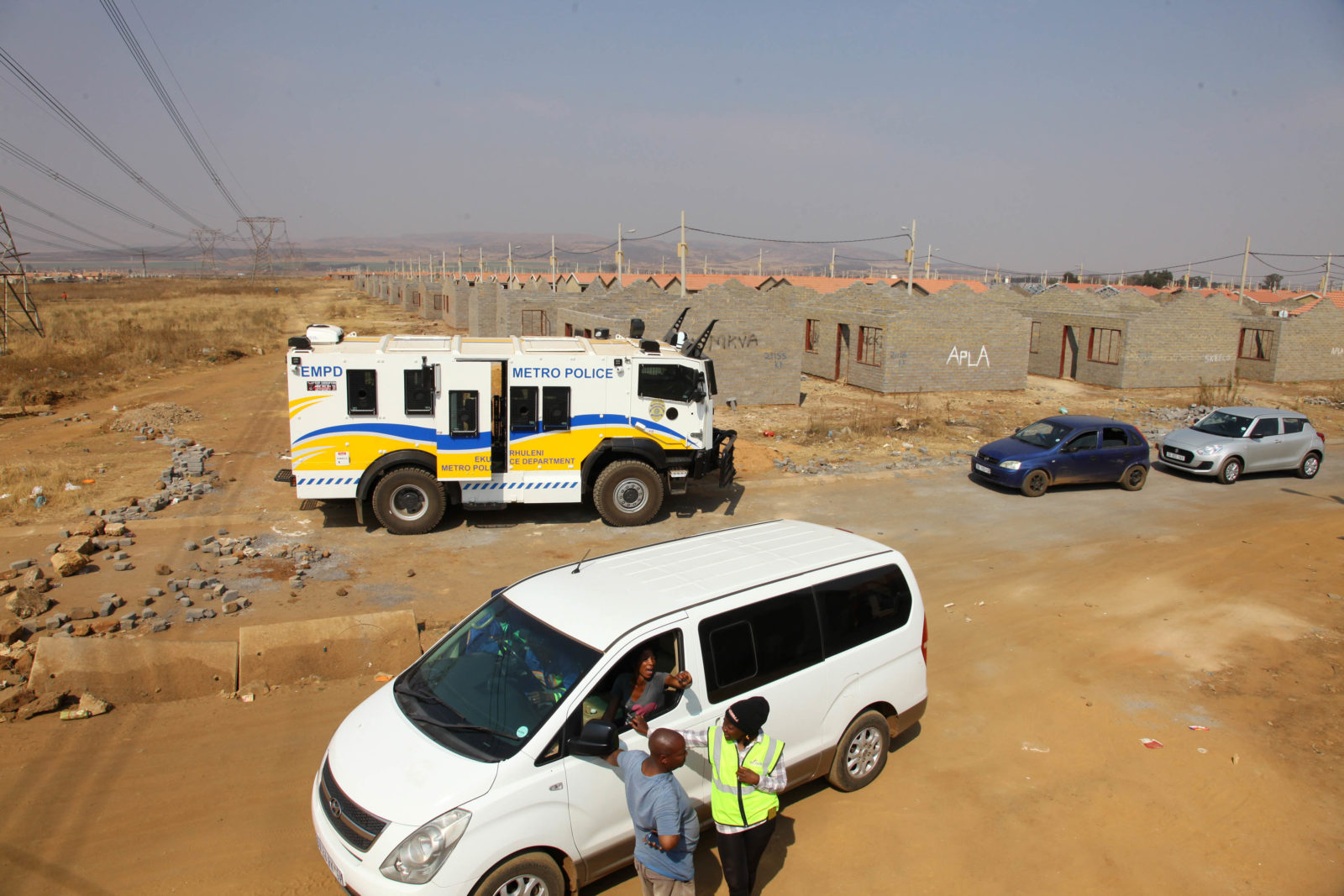 Those involved in the distribution of government houses in Gauteng fear for their lives as allegations of corruption in the allocation process leave desperate residents seething.

The dangerous turn the unresolved housing situation in Palmridge, east of Johannesburg has taken, has pushed leaders into hiding. Some will only speak on condition of anonymity. They fear for their lives following the occupation of houses by residents from surrounding areas.

Reconstruction and Development Programme (RDP) homes in Eden Park were completed and made ready for those who had applied for housing between 1996 and 1997. But a group of people from Palmridge who had not been allocated houses allegedly occupied the homes. Finding no other places to live in Eden Park, the residents resigned themselves to waiting for a new housing development.

Three days before houses were scheduled to be handed over in Palmridge, on 18 July for Mandela Day, a group from Katlehong, Tsakane and Vosloorus occupied these houses. In the group were also people who had been ousted from their rightful homes in Eden Park by former residents of Palmridge.

According to a member of the South African National Civic Organisation (Sanco), Palmridge residents have been fighting since 2001 to be allocated houses and they cannot allow people from a different ward to be placed there simply because their homes in Eden Park were occupied.

Some residents have accused members of Sanco of selling the homes for bribes. Sanco members deny this, saying they work to allocate housing fairly. A Sanco member who asked to remain anonymous has received numerous threats.

“In politics you are not safe. We are taking risks. The situation right now is not okay … I am trying to hold back because at the end of the day, our lives are not safe, we are not safe, our councillor is not safe. Once you speak, those people will come here,” says the Sanco member.

It is widely believed that former Sanco branch chair Sipho Khutane and former councillor Lefa Nkosi were shot and killed over housing allocation issues in 2018. Nkosi’s car was sprayed with bullets, 30 cartridges were found nearby. Residents say the cases simply disappeared.

The Sanco member who asked to be anonymous had been kidnapped and was cut across the chest by unknown assailants.

“It is getting out of hand now … Our lives as leadership, we are scared. We don’t sleep because there are many accusations that we are selling homes, but the fact is people must get homes in the rightful manner,” she says.

“I have two girls. When they started this, I had to move my kids and hide them back home so that whoever comes, only comes at me. I don’t sleep at night … The threats are all over.”

She says her children are still traumatised by the violence. “The day when I was stabbed, my children had to come get me from hospital.”

As she is gambling with her life, her family wants to know what she is gaining from her involvement.

When Eden Park was occupied, the Sanco member was appalled.

“Why did they come in forcefully? And why did they fight with the people who are supposed to be living here? Because they were supposed to unite with us, [so we can] tell the MMC [member of the mayoral committee] to do what is right,” she says.

She adds that the government will never get through the housing list if it allows occupations.

“Documents say approved, but today those people don’t have houses and it’s because of this thing we allow. Even today, if we are going to allow people from Tembisa and Thokoza to move in, then what about those with approved documents who have to move here?”

Former Umkhonto weSizwe (MK) veterans have given up a lot to attain freedom, but some complain that the government still doesn’t take care of them. They lack the basics of housing, water and electricity.

Despite dedicating his life to the struggle against apartheid, Shadrack Motloung, 72, says he lives in poor conditions. Disenchanted with the ruling party, the former MK member unashamedly admits to being part of the group who occupied complete and incomplete RDP houses in Palmridge, some of which were to be allocated to former MK veterans.

“Eden Park was for people with C forms, but people from Palmridge and other areas invaded and we were unable to move there … Once we found out that people [had bribed officials for houses] and they were coming here, we said, ‘Let’s go and get houses’.” C forms prove that residents have applied for government housing (by filling in “Form C”) and are registered on the housing waiting list.

Motloung fears he will die before he is officially allocated a house. “I know taking houses like that was not right. I cannot rest … the years have flown by. I will die without anything,” he says.

Motloung adds that no one has taken the children of MK veterans into consideration, and they are not doing well.

“Someone who went into exile, the father died and now the children have no one to look after them. What will happen to those children? What type of government would allow this? We need good leaders. They are only looking at their tummies. I must still claim to have a government when this is happening? No!”

Sanco section chair Rufus Makobela, 49, from Bokgomo in Limpopo is upset that the occupiers were not from his ward and took a home he had been waiting for since 2009.

“People from Thokoza, Tembisa, Soweto and Katlehong coming to invade our homes. These homes have been built for people who have also been living in shacks for many years, and they are registered,” he says.

“We cannot allow young children to move in here and claim to be vets. Where have you heard of a 29-year-old MK vet? So that one, we cannot allow,” says Makobela.

Motloung insists that corruption means he couldn’t afford the allegedly necessary bribe. “If they are being sold, this means I won’t have a house.”

He is aware of people as young as 18-years-old paid for houses, claiming to be MK veterans. He is not surprised someone tried to make money in the process. Motloung says corruption is taking place at the Department of Human Settlements offices in Alberton and Katlehong, asserting that someone bought a house in 2016 for R15,000.

Although the Sanco member is not sure where the rumours started, they have endangered her life. She says the lack of transparency in housing allocation is the reason they are fighting with occupiers.

Entrepreneur Sipho Ntimba, 42, installed the windows of the RDP houses in the area and has also applied for housing. He says those who have paid must get their money back and let the government do its work, because they cannot accommodate outsiders for whom provision has not been made.

Ntimba accuses those in authority who are selling houses of not being leaders because “leadership cannot take money in exchange for houses … In South Africa, if I go to a shopping mall and steal, I go to jail. Take a house and you will not be sentenced.”

He says the metro police damaged the majority of the homes when they tried to evict occupiers at the end of July. “I cannot vandalise it because I still need to live there. How will I fix it with no money?” he asks.

Sanco human settlements head of department Laurence Tsotetsi says occupiers are undermining the leadership of Ward 61 in Palmridge. The priority is to house people from Ward 61 over those from neighbouring wards. “There are many shacks here. We need grannies in houses first.”

Tsotetsi says only 75 people will be allocated from Palmridge Ext 9’s Phase 5 and 6, where up to 7,000 people live.

Ekurhuleni member of the mayoral committee for human settlements Lesiba Mpya said just over 6,000 RDP houses will be built, but did not indicate when they would be completed. They will be split between residents from different areas, including Palmridge, and MK veterans. Two thousand units will be set aside for those who can build for themselves or don’t qualify for a bond as part of the rapid land release programme.

When Gauteng Premier David Makhura, Ekurhuleni mayor Mzwandile Masina and late councillor Lefa Nkosi launched the programme in Palmridge in September 2018, Masina said the houses were being built because they did not want to see “illegal land invasions taking place like everywhere else”.

Mpya says they needed quality assurance to be done so that the houses could be certified and then inhabited. “The project is on its road to completion and people just needed to give us a bit of time.” He says they have identified those who will benefit, including people living in Sakhile and Mavimbela in Katlehong, where two families have been sharing a four-roomed house.

Mpya has requested that anyone with information about corruption reports it to local authorities. But Motloung says this is futile.

As MK veterans, they are not being addressed, and Motloung has not received any support from the provincial office.

Bafana Mahlabe, the provincial spokesperson for the MK Veterans Association, said they were aware MK veterans were involved in the occupation but they did not organise the action.

“We do not condone that kind of action. It is dire in terms of housing needs, but we need to handle matters in a different way … Although there are comrades who are genuinely in need of housing, we cannot allow a state of anarchy to prevail.” DM