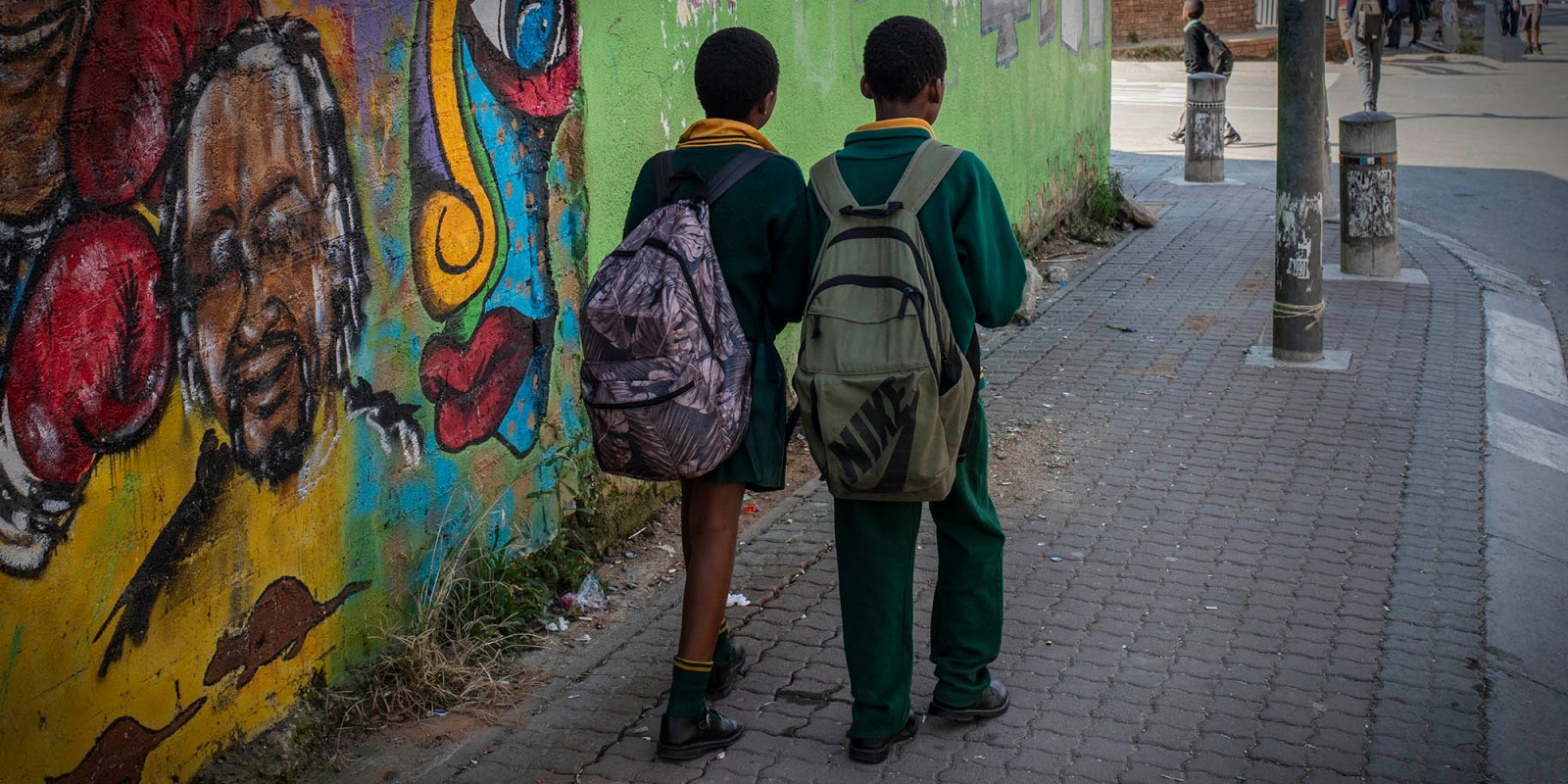 In Grade 3, learners do not have the skills in their home language to make the transition to English easier, says literacy consultant and trainer Jacqui Dornback. (Photo: EPA-EFE / Kim Ludbrook)

African-language learners face huge cognitive and linguistic challenges in their leap from mother-tongue instruction in Grade 3 to English in Grade 4. After three years of exposure to home-language teaching and a solid introduction to English as a first additional language, children should be bilingual. But the reality is very different.

In 2009, Sinokuhle Songongo was a Grade 3 learner at an isiXhosa primary school in Makhanda, Eastern Cape. Songongo had very little exposure to English growing up in an isiXhosa-speaking family.

One morning in 2010, Songongo and her classmates were shocked to learn that English was to be the language of instruction from Grade 4. It was a language to which they had little exposure or confidence in. They had been taught English in Grades 1-3, but not in any way that would prepare them for learning in the language Grade 4. Songongo said the transition was difficult because learners did not have the linguistic ability to understand the classes, which meant that teachers had to constantly translate everything to Xhosa.

“The textbooks were written in English, the teachers had to translate everything into isiXhosa, but then the exam papers were in English,” says Songongo.

She says the hardest part of the switch was starting to learn natural sciences and history in Grade 4, when she did not understand any of the technical vocabulary. She is now redoing English and maths literacy at Gadra Matric School in Makhanda, with the hope of being a teacher some day.

Songongo’s experience is one of thousands that highlight how current classroom language practices are seriously hindering SA learners’ education and personal development.

“The transition from Grade 3 in the foundation phase to the intermediate phase is on its own a very big transition, even without the language component. In the foundation years, children are basically learning how to read, and we expect them by the end of Grade 3 to be reading fluently, quickly, and with understanding.”

However, English is still viewed as the language of mobility and success by parents and teachers, and matric exams are written only in English or Afrikaans. As a result, English is prioritised as the medium of instruction from Grade 4 by SGBs.

“The original idea is that after three years of exposure to good home language teaching and good English as a first additional language teaching, children should be bilingual. But, in reality, this is not the case,” says Dornback.

She believes the current language policies can be successful if implemented correctly.

“We know from research that the longer one is exposed to teaching in the home language, as well as good teaching in the additional language, the better. But, in reality, English is the language of power and jobs – therefore parents choose an early switch. So, the problem is not the policy but the implementation of such a policy in a complex society such as ours,” says Dornback.

If mother tongue language is taught well in primary school, then the learners can transfer cognitive abilities and skills into English. However, Dornback says that in Grade 3, learners do not have the skills in their home language to make the transition to English easier. The vocabulary that they are exposed to in Grade 3 is predominantly from fiction. Pupils are not exposed to the more sophisticated conceptual language required for learning, leaving them completely in the dark and overwhelmed when they come across terms such as “photosynthesis”, “arrange”, or “correlate” in Grade 4.

“When the children have to read these terms and they don’t understand them, they have never been exposed to them, they don’t have a hook from their prior language that they can latch on to,” says Dornback.

Literacy advocates argue that the way English is taught in foundation phase is a major source of the literacy crisis: English is largely ignored as a first additional language in Grades 1-3, with teachers spending one to three hours a week on it. The teachers are frequently not comfortable teaching in the language and often revert back to mother tongue to explain concepts, or simply ignore it completely.

Dornback says that while there are set methodologies for teaching a new language, English is usually taught haphazardly, which makes it harder for the learners to absorb any information.

However, it seems that part of the problem may be that teachers themselves are not proficient in the content they are teaching. A study by the Department of Planning, Monitoring and Evaluation found that the majority of teachers who completed their survey failed simple English and maths tests. Although it was a small sample, it indicated that some teachers are themselves not in a position to teach effectively in English. This is because they have not been given sufficient training or exposure to English, especially teachers trained during apartheid.

Other criticisms have been levelled at the CAPS curriculum itself.

Barbara (not her real name) is a Grade 4 school teacher at a primary school in Cape Town who teaches in English from Grade 4. The majority of the students are isiXhosa speaking. She finds it very challenging to support children across the big bridge from Grade 3 to 4 because of how assessment-heavy the curriculum is. This puts pressure on teachers to teach at a pace that could leave many learners behind. If learners are struggling with the language comprehension, teachers are then stuck with the dilemma of possibly falling behind in the curriculum, or continuing with the curriculum knowing that the learners did not fully grasp the subject matter.

“There is very little room to actually continue and to reinforce ideas – you have to move on or else you are going to fall very far behind. As much as we were taught in university ‘don’t teach to assess children’ that is all that we do,” Barbara says.

Earlier this year, many education NGOs were loath to celebrate the increased 78% matric pass rate for 2018, raising concerns about the missing 400,000 learners who enrolled in Grade 1 in 2007 but did not reach the matric exams.

Barbara says that once students start doing badly in primary school, especially with language, they develop an apathetic attitude towards their schoolwork. Without pressure or support from home, the learners then quickly lose interest in school. This kind of mentality contributes to an extremely high dropout rate.

“There are very few kids that excel. Most kids perform poorly when it comes to English and Afrikaans when they don’t have much exposure to it outside of school,” says Barbara.

She says the children who do well usually have parents who read with them and help them with English after school. Many children do not have supportive homes, as parents are working, and/or are not readers themselves. This leaves children vulnerable to falling behind with the curriculum.

There is no broad-stroke solution for such a complex issue. It requires inputs from multiple actors: foundation phase teachers need to put more emphasis on academic English, and intermediate teachers need to be aware and supportive of the huge cognitive and linguistic demands being placed on these learners, which requires teachers to be trained to successfully implement the bilingual language policy. Parents need to be supportive and present in their children’s education, while the DBE needs to be more cognisant of policy implementation and effect at a grassroots level. DM

Lucas Nowicki is a final-year journalism student at Rhodes University and a freelance reporter for GroundUp news with an interest in education journalism. He has been working with four primary schools in Makhanda.