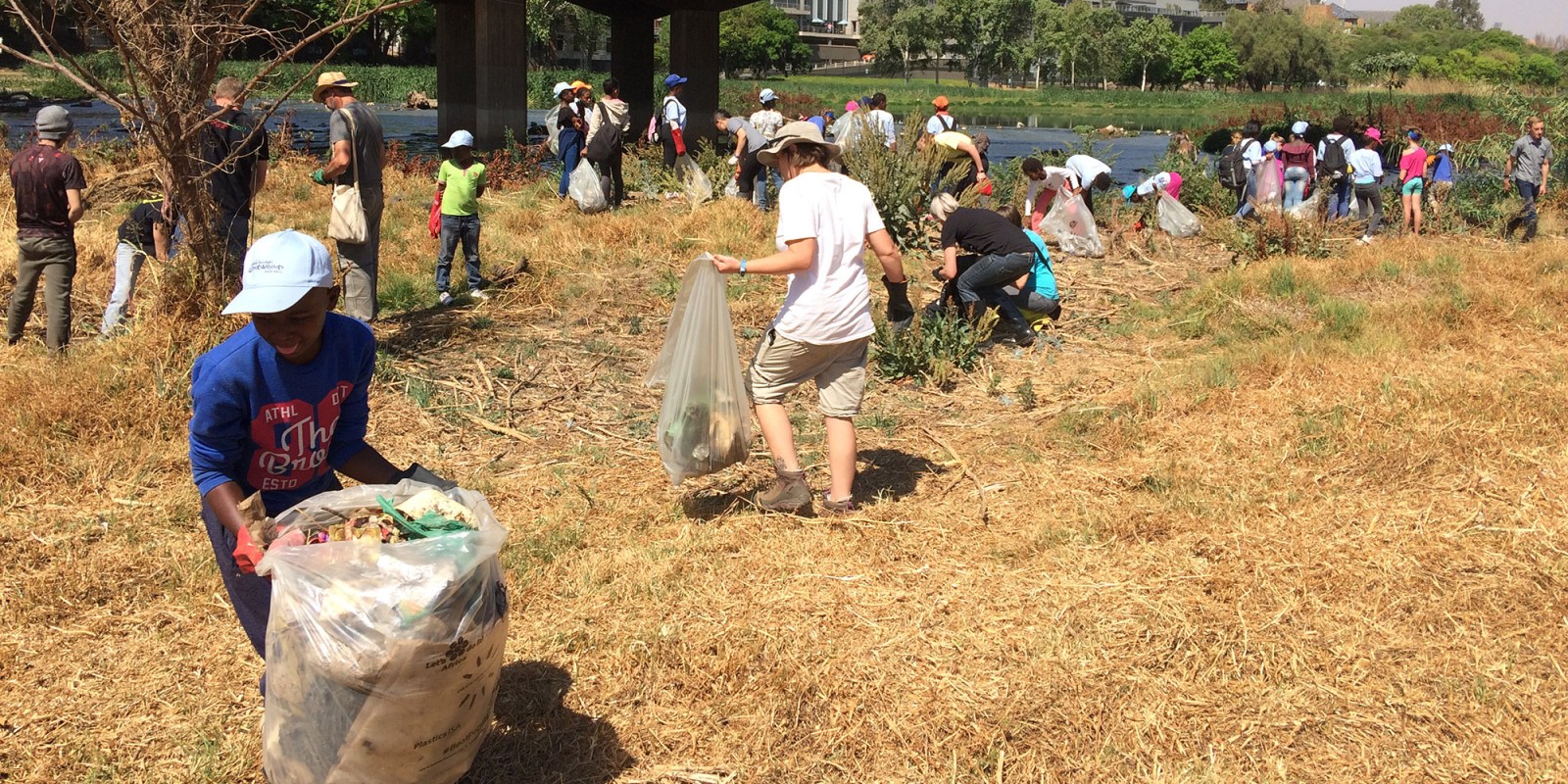 Healing the Hennops and many other initiatives show that a critical mass is emerging —consciousness has been raised and more people are getting involved. (Photo: supplied)

South Africa’s rivers are in crisis. A recent report by the Department of Water and sanitation found that only 15% of our rivers are in good condition, and only in the upper reaches of rivers. Unchecked pollution from a number of sources is a serious threat to public health. Government has overlooked this growing crisis for more than a decade. But, as Maverick Citizen reports, people are beginning to take the health of rivers into their own hands.

Civil society has three options when faced with dysfunctional government: stand aside, criticise, or dive in and do something to make a difference. The first two are the easy options. The third takes gumption, persistence and a strong constitution. Particularly when it comes to tackling stinking rivers clogged with tons of sewage, polystyrene, disposable nappies and plastic.

Willem Snyman is a visionary activist who has walked, paddled and fallen into the fetid Hennops River, from its farthest reaches in Ekurhuleni, to where it deposits its polluted contents into Hartbeespoort Dam. And his “third way” has captured imaginations across Gauteng and mobilised hundreds of people to take hold of a new vision for the troubled waterways of SA’s heartland.

It began many years ago in the fertile imagination of Willem, an artist who lives next to the Hennops River in the newly-proclaimed Crocodile River Reserve. This is where the three rivers of northern Gauteng – the Jukskei, Crocodile and Hennops – run like veins across a landscape of grasslands, bushveld and riverine valleys. In his artist’s eye, Willem saw all of them together forming a mighty river and fountain sanctuary, a natural wonderland of trails, picnic spots, game sanctuaries and, most of all, clean waterways and fountains.

Willem put his vision to whoever would listen. To those who wouldn’t, specifically government officials, he just kept sending detailed missives, pointing out their responsibility for protecting and restoring these rivers.

And it was always to the Hennops that Willem returned. The most polluted river in SA, many claim. It has written the rule book for sheer depth and extent of the pollution it carries. From human detritus in every shape and form to toxic dumps from factories, the Hennops heaves and chokes.

And this was where Willem would work his third way. After months of walking the river and its tributaries in Ivory Park and Tembisa, and doing cleanups along the way, Willem decided to go big time. He had raised awareness of the river plight to the point of critical mass by becoming a constant irritant to the authorities and politicians in Tshwane, the Department of Water and Sanitation (DWS) and Ekurhuleni, through his constant emails and phone calls.

In October 2018 Willem mobilised. He announced the beginning of a cleanup that would pull people from all walks of life, from families and companies, from schools and churches, starting at the headwaters of the Kaalspruit, one of the main tributaries of the Hennops.

Weekend after weekend, week in and week out, people in their hundreds gathered and removed the most evil-smelling and rotting carcasses of humanity’s waste from the rivers. Tons of it. But still, the litter kept coming. And so did the cynics. “It’s no use treating the symptoms,” they would chant. “You’ve got to tackle the causes.” As if Willem and the teams of volunteers didn’t know.

So Willem worked it from both ends – cleaning the rivers while lobbying the authorities whose mandate it was to care for the waterways. And they came. Or at least a few of their more dedicated officials did. And joined in the cleanups, at times, or prepared the riverbanks where cleanups were to happen.

But still, the litter comes. Downstream from Supersport Park in Centurion, dozens of barbel, tough denizens of the most polluted streams, lie rotting in the shallow waters. They couldn’t handle the foul, turgid Hennops. And the polystyrene, the plastic and the nappies keep coming. And the plastic islands in the Hennops continue to grow and solidify.

It’s one thing to mobilise in order to tackle the challenge in front of you, another to maintain the momentum in the face of an avalanche that seems to grow in size every week. The real challenge, as the cynics rightly point out (without giving any solutions!), is how to tackle the problem at source.

And the “source” carries some of SA’s most intractable socio-economic challenges. Informal settlements along river banks with little means of income and no consistent waste collection (refuse removal trucks often can’t get into these crowded spaces without proper streets); the Bagarezi (informal waste-pickers) who recycle a phenomenal quantity of material from rubbish, but who often live on the rivers and use them to wash their reclaimed goods; illegal sewer outlets; factories illegally releasing toxic water; dysfunctional Wastewater Treatment Works such as those at Olifantsfontein and Sunderland Ridge; an ineffective Water and Sanitation Department.

But the worst are unscrupulous “developers” who either force building rubble removers, or buy their products, to dump their tons into rivers and wetlands to create illegal platforms on which dozens of new shacks are built and sold. Gauteng and its local authorities are yet to discover the cost of this activity, on infrastructure, destruction of natural resources and the possible loss of life when a flood comes. It is not being curbed by the authorities and appears to be out of control and possibly controlled by a political mafia.

Willem confronted this more than once in Ivory Park and Tembisa and was warned to back off if he valued his life. Tackling the “source” is a hefty challenge. And civil society cannot do it. Government has to. If it has the will to do so.

But the momentum to restore not only the Hennops but all the rivers and waterways of Gauteng continues. And grows. This is in no small measure due to the dozens of local initiatives that were already there before Willem wandered into the picture, or which picked up inspiration from his determination to make a difference. Hennops Blue Horizon, Fresh.ngo, BluSwirl, Roots and Shoots, Lewende Woord Church in Centurion, Over the Garden Wall, KleenHealth SA and many more.

And the river that epitomises Joburg’s carelessness and neglect, the Jukskei, also has its champions. On 19 October, Spruit Day, more than 20 residents’ associations in different parts of Johannesburg will be working in unison on a cleanup day focusing on tributaries and parts of the Jukskei itself. This is an annual event that has gathered momentum over the years.

These ongoing drives to restore the Jukskei and Hennops are also supported by Armour (Action for Responsible Management of Our Rivers) which was created in 2015 after a public outcry about the raw sewage that was being released into the Jukskei from Northern Wastewater Treatment Works. But, as a recent report has shown yet again, when it comes to government and business, the problem is just getting worse.

For these reasons Armour supports and highlights the efforts made by civil society in different parts of the country to clean up where they live, by featuring their work on the Armour Facebook page. Besides highlighting the ongoing disasters across South Africa, it portrays the extraordinary willingness of people to clean up, week after week.

It also posts articles on creative ways of using garbage which often ends up in our rivers (bless those innovative artists who turn trash into treasures). And it looks at ways to put pressure on companies to rethink what they are producing and how it is packaged.

It’s easy to take one of the cop-out options – criticise or step aside. Or point out that treating the symptoms is not solving the problem. But what Healing the Hennops and the many other initiatives show is that a critical mass is emerging. Consciousness has been raised. More people are getting involved. And this will become an unstoppable movement for change. DM

Anthony Duigan is with Action for Responsible Management of Our Rivers (ARMOUR).

Maverick Citizen will run a number of articles on civil society and community efforts to clean up rivers.