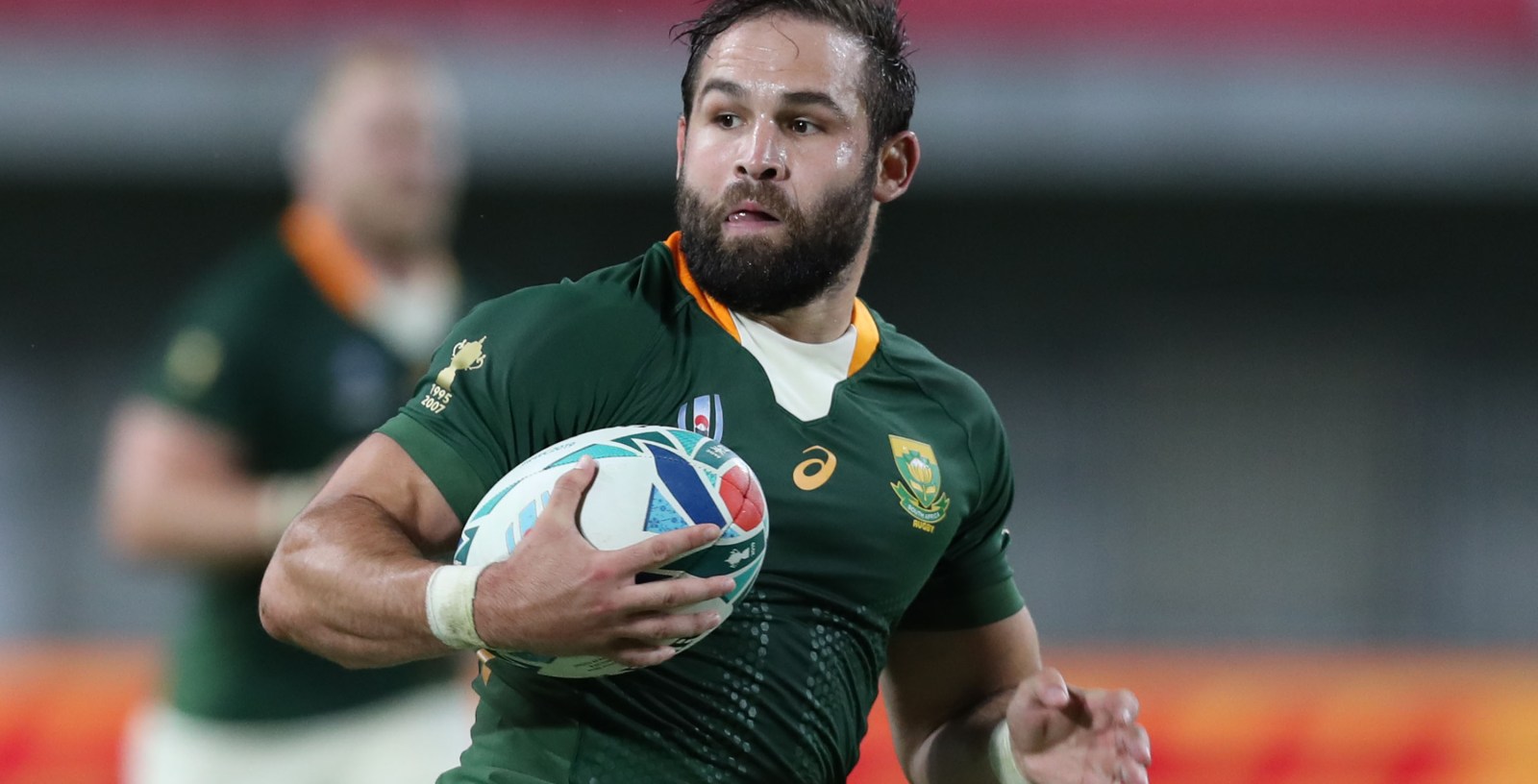 Cobus Reinach of South Africa on his way to score a try during the Rugby World Cup match between South Africa and Canada at Kobe Misaki Stadium in Kobe, Japan, 8 October, 2019. EPA-EFE/BUDDHIKA WEERASINGHE

Canada were predictably brushed aside as the Springboks confirmed their place in the quarterfinals of Rugby World Cup 2019 by thrashing the North Americans 66-7 in Kobe.

The 10-try rout under the roof at the Kobe Misaki Stadium, three going the way of scrumhalf Cobus Reinach, means that the Boks will finish second in Pool B.

Unless of course New Zealand somehow find a way to lose to Italy without scoring a bonus point in their final outing on Saturday, which would make South Africa group winners. It won’t happen.

Not that it matters, really. When the draw was made almost two years ago, Pool B looked the most predictable, with the outcome of the match between the Boks and All Blacks always set to be the one that determined first and second.

After losing 23-13 to New Zealand, South Africa have won 57-3 against Namibia, 49-3 against Italy and 66-7 against Canada. They finished the Pool stages with 185 points scored and 36 against. The Boks also scored 28 tries in four matches – an average of seven per game.

In this pool, the gap between the haves and the have-nots of world rugby is as wide as ever. The All Blacks have already scored 180 points in three matches, with one more game to come. It would be a surprise if they didn’t put at least 40 on Italy as well.

For both teams this pool has done their play-off preparations little good. After their thunderous opening clash in Yokohama nearly three weeks ago, it’s been nothing but a procession of easy wins – as unsightly as the a schoolyard bully pummelling the meek.

What the result and the match against Canada taught the Boks about themselves as they head into the business end of the campaign is also open to debate.

For 30 minutes Canada hardly touched the ball – the Boks had 94% possession for the opening half hour, scoring six tries in that period. They have had more intense training sessions.

The last and only time these sides met in the RWC was in 1995. The Boks won that ill-tempered affair in Port Elizabeth, which saw three players sent off, 20-0. In Kobe on Tuesday, the Boks were 19-0 up inside 10 minutes.

In what appears to be a burgeoning trend in World Cup games between these sides (if two RWC matches in 24 years could be called a trend), Canada suffered a red card.

Directives about protecting the neck and head area are very clear and English referee Luke Pearce had little choice but to show red to a side already 40-0 down.

When Larsen was dismissed it looked likely that the Boks were on course for 100 points – a scoreline no one wants, or needs.

Frans Steyn added the Boks seventh try on halftime to give the men in green a 47-0 lead at the break.

Fortunately for Canada and the integrity of the tournament, the Boks were understandably mediocre after the break.

Canada actually scored first in the second half, through hard-working flank Matt Heaten. It was a deserved reward for their best period of play in the match.

Normal service resumed though as the now scrappy Boks scored through hooker Schalk Brits, when he jinked his way over the line from close range.

Perhaps it was the violent change of direction he took when scoring, but the likeable 38-year-old with the permanent smile limped from the pitch minutes later, to raucous applause.

With the play-offs looming, Brits has played his part on the field at this tournament, and he knew it by the way he took his leave. It wasn’t a “see-you-next-week” acknowledgement to the crowd. It was a wave of goodbye.

Of course, he will still be a vital member of the team in training and in terms of the team’s mental well-being, given his sunny disposition. But unless Bongi Mbonambi or Malcolm Marx are injured or suspended, this was Brits’ last match in a Bok jersey.

Late tries from fullback Damian Willemse, first at Test level in his sixth appearance, and reserve prop Frans Malherbe, added more gloss to the score as the game descended into the rugby equivalent of a highway pile-up.

In the first half, the Springboks were clinical, played with precision and controlled every aspect of the game.

Reinach and halfback partner Elton Jantjies revelled behind a pack in charge and from that base were able to unpick the Canadian defence at will.

Jantjies, who was so poor against Namibia with an equally easy ride behind the pack, was much sharper in Kobe.

His deft passes and cross kicks put his teammates into little gaps that quickly became gaping holes once the first layer of defence was pierced.

Reinach sniped and used his speed to tear up the Canadians, scoring his hat trick in the space of 11 minutes – the quickest in RWC history.

Damian de Allende opened the scoring with a simple try when he ran on to the shoulder of marauding lock RG Snyman. The giant second rower ran a lovely line on to an inch-perfect Jantjies pass to cut through Canadian lines. De Allende, like a pilot fish, stayed close to take the pass.

Wing S’bu Nkosi, who was a constant threat, went over in the sixth minute. The match had barely started and Canada were out of it.

Reinach then enjoyed his purple patch, which included one sensational break from deep inside his own half. He scorched the defence stationed around a ruck, used his speed to make a quick 25 metres, before chipping and collecting for a wonderful solo effort.

And so it went with Snyman and his big mates up front creating havoc and Reinach and his buddies making hay behind.

The World Cup only starts now for the Boks. Since that slip against the All Blacks, they’ve done everything expected of them.

They now need to find even more, and be even better, because things are about to become a whole lot tougher. DM