Capitol Hill’s biggest mystery yet: The Strange Case of the Missing Republicans 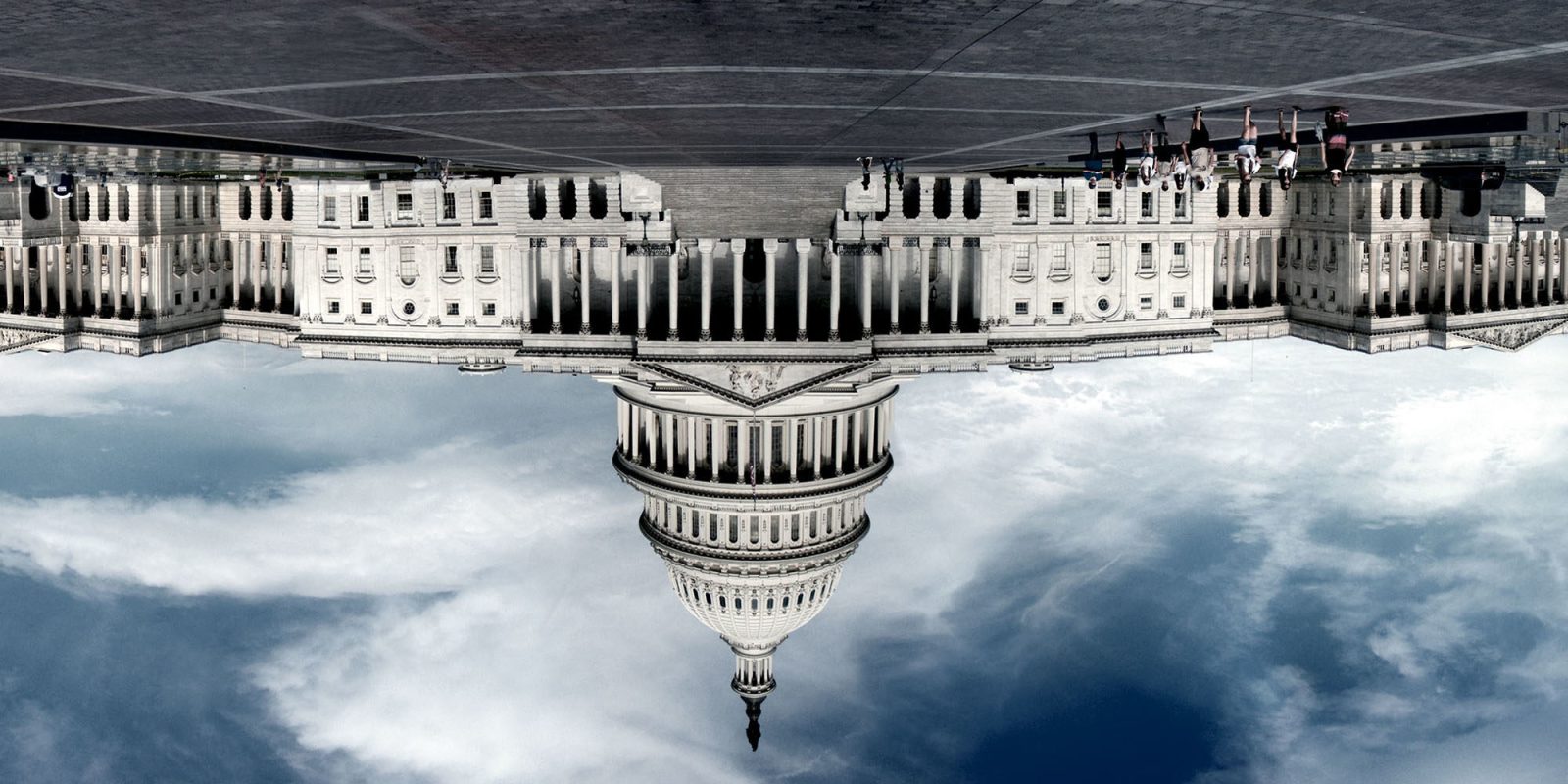 Republicans in the Capitol: Missing without a trace. (Photo: K3nna/Flickr)

In the Capitol Building, the most amazing gathering of police detectives and private eyes takes place in a desperate effort to find hundreds of missing Republican legislators. Things do not quite go according to plan.

It was a dark and stormy night; the rain fell in torrents, except at occasional intervals, when it was checked by a violent gust of wind which swept up the streets, rattling along the housetops, and fiercely agitating the scanty flame of the lamps that struggled against the darkness. There were flashes of lightning and the roll of thunder from an unusual autumnal thunderstorm. Then, suddenly, there was an electrical power outage on Capitol Hill in Washington, DC, including the US Capitol Building itself.

Thomas Jefferson “Shaka” Sisko, the highly respected chief of the Capitol Hill Police Force was sitting in his office, listening to the barely audible hum of the back-up generators in the basement; the occasional stutter of that equipment made the lights flicker ever so slightly, but it was just enough to affect the chief’s concentration. In a nod towards an old family tradition, he lit a small bunch of leaves in an ashtray hidden discreetly on his bookshelf in this ostensibly smoke-free building, and the pungent smoke curled slowly upward.

He wasn’t totally clear about the full import and the ins and outs of this habit, but he had come to believe it helped him concentrate better when he was tightly focused on a really difficult task, or particularly politically sensitive issue. This time it was both.

The habit came down to him from his grandmother, a woman who had come to the US in the bad years of her African homeland, to escape the police raids against political dissidents. “Imphepo”, she had called these leaves, and his grandmother, his Gogo, had pressed upon her now much more Americanised family the importance and usefulness of the ritual, even if Chief Sisko really did not have a deep sense of how or why it worked. But he had learned to trust his grandmother’s injunctions on many things. He had read about how some people in Spain, descendants of forcibly converted Jews 500 years earlier, continued to light candles on Friday evenings, long after the overt religious meaning had become lost to them; and he thought about how this habit of his would be passed on to his children too. Couldn’t hurt.

All of Chief Sisko’s friends – and most of his colleagues, and even his subordinates – called him by his nickname, “Shaka”. When his classmates at the police academy all those years ago learned about his grandmother, they quickly fastened on to the name of the Zulu king as his nickname – and it stuck. Now the nickname was even on his desk and office nameplate, and his actual office email address was [email protected]. Easy to remember, and impossible to forget.

The question occupying his mind now was the mysterious disappearance of virtually the entire Republican congressional and senatorial delegations, except for Mitt Romney, Ben Sasse, Susan Collins, and Adam Kinzinger. There were rumours, speculations, and theories, but virtually no hard evidence or explanation for this.

What was clear was even though President Donald Trump’s current travails with the Ukraine scandal seemed to be heading inevitably towards a resounding vote to impeach him in the House of Representatives, perhaps by Congress’s traditional Thanksgiving recess at the end of November, no Republican senators or representatives were to be seen on any of the weekend television news and talk shows. Usually, most of them would have been prepared to sell their aged grandmothers into indentured servitude to get on any of those shows, but now they were not to be seen anywhere, or even to answer their private cellphones.

Chief Sisko had been asked to find them all, or, at the very least, to find out where they had gone or what had happened to them. The imphepo’s impact was kicking in, he was actually starting to see things more clearly now, even if he still didn’t have any answers, but clearly he needed some insights if he was going to get to the bottom of it. The lights flickered again, there was yet another of those unseasonable bursts of thunder. It was getting late and it was time to speak with his assembled deputies in the nearby conference room to sort out how to proceed further.

The lights flickered again, then went out for a second. They came back up quickly, but this time one of the overhead lights gave out that annoying buzz that comes from a neon tube just before it dies. Funny, there was a strong smell of ozone in the air. “Probably the lightning,” the chief said under his breath.

The operations room was filled. “A good sign,” Sisko thought. He turned to face the gathering and started to set out the agenda for the meeting. There were all those Republican legislators who seemed to have gone missing, whereabouts unknown. The pressure was coming from the television networks, the all-news channels and newspapers, as well as spouses and congressional staffers, to find all these missing people before there was a public outcry. He handed out a search scheme, but he cautioned attendees not, at least at this point, to speak with their usual colleagues in all of the many other police forces in and around Washington.

The light dimmed again and the chief looked up from his notes and stared intently at the crowded room. “Strange,” he muttered to himself, “lots of new faces tonight.”

Chief Sisko was an aficionado of detective thriller fiction, detective television series, and films. (He was known for his vast, carefully catalogued collection of these materials.) He was even the immediate past US president of the “Baker Street Irregulars” fan association of Sherlock Holmes lovers, something he was inordinately proud of. Looking at the assembly, the seemingly unfamiliar faces began to come into focus. He started to see many he realised he recognised.

A voice with a rather clipped British accent spoke up to ask the chief, “Well, what have you ruled out?” In response, Chief Sisko replied, “This case is so strange, to be honest, I’ve ruled out nothing so far: not terror attacks, not alien abductions, not mass hallucinations, not nothing.” From that same British voice then came the advice, “How often have I said that when you have excluded the impossible, whatever remains, however improbable, must be the truth.” The two dogs in the room, Snowy and Rin Tin Tin, did not bark. Sergeant Joe Friday then turned to the crowd and said that their task, collectively, was to get “just the facts”, even if they seemed unbelievable.

Dana Scully and Fox Mulder started to speak softly to each other about alien abductions, and whether the people in the White House were really who we thought they were; the words “invasion”, “body snatchers”, “pod people” and “truth is out there”, could be heard, and someone else muttered, maybe DS-9 Security Chief Odo could help untangle this riddle. At that point, Chief Sisko barked, “Anyway, every one of you have your assignments; let’s get started right now! Dismissed!”

Then, suddenly, the regular office lights came back on full strength. Sisko blinked when he saw the room was empty. “That was very strange. What in the world was I thinking?” As he looked out at the now empty room, besides the usual clutter of empty paper coffee cups, he saw that an oily, dark, dirty curved pipe, still warm, had been left behind on the floor, next to a well-worn deerstalker cap. A few rows away, there was a small, perfectly folded origami figure, left on the armrest.

But the Republicans were still missing. DM