An unlikely crocodile adventure in KwaZulu-Natal 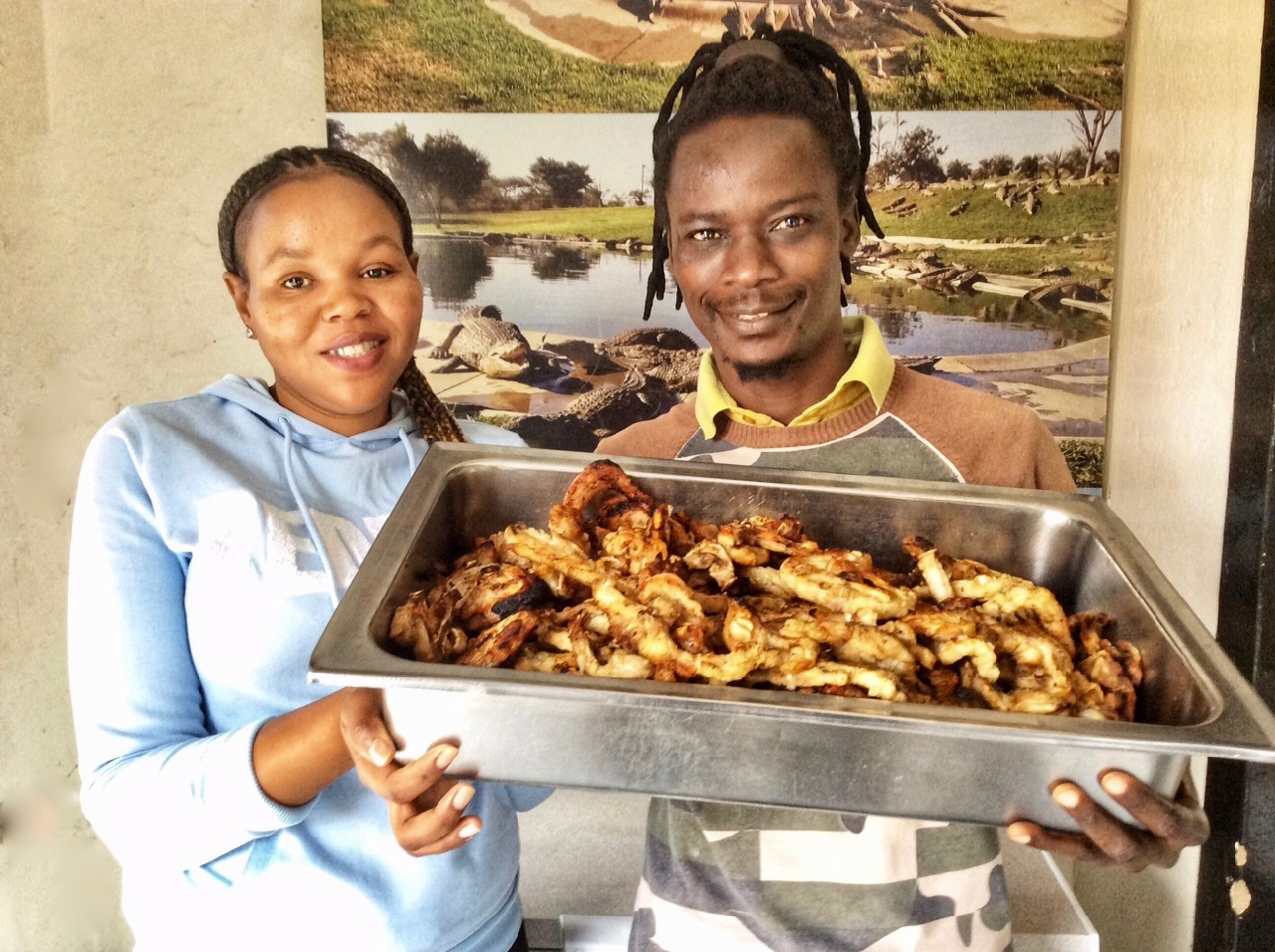 Having survived to eat another crocodile, instead of being eaten by one, an unexpected brave new world of croc cuisine opens up. Shed no crocodile tears here.

There I was last Tuesday, not having thought of crocodile in almost a year. Ever since sprinting from one. At the Mlilwane Wildlife Sanctuary in eSwatini, formerly Swaziland. While attending a “rhino survival function” focused on ending the rhino horn trade ban.

There were no rhino around when our host, conference convener Ted Reilly, chief executive of Big Game Parks and eSwatini’s “father of conservation”, took us – pretty close – to observe a mama croc paying attention to her eggs. She was too busy being broody to concern herself with us – was the general idea.

But then she saw Reilly. And sprang forth in a great lumbering flash. Although not as fast as she might have been, one imagines, had she not been tied by maternal protective instinct elastic to her soon-to-hatch little snappers.

And so we survived to eat another crocodile – instead of being eaten by one.

But back to last Tuesday.

“Anything interesting of a culinary nature going on around here?” I ask my farmer friends, Mike and Lynn, who live in the Karkloof near Albert Falls Dam. Lynn’s just had a luscious high tea to celebrate a significant birthday. To indulge and celebrate with her is why I’m there.

Mike ponders my question, for not too long. Then tells me about this woman who, most days, lights a fire in a little braai unit she sets up on a verge near the turnoff from the Greytown road to their farm. People place orders, on their way to work, for the crocodile meat she sells. She has it cooked and waiting for them to pick up on their way home.

And there’s a crocodile meat café in Pietermaritzburg, Lynn pipes in before giving me detailed directions. Not difficult to find.

By morning, when I am set to leave, they have made a plan.

Thinking our roadside croc meat purveyor may not speak English or want to talk to a camera-wielding stranger – and to make sure I find the Pietermarizburg café (O ye of little faith) – Mike has asked the farm induna, Vusi Zuma, to accompany me (then taxi home).

Because the crocodile woman was not in her spot.

Alone I would probably have given up then and there. And missed out on my midweek crocodile adventure.

“Do you know where the crocodile farm is?” I ask Zuma when we come upon her empty spot, Mike having said she got her crocodile meat from a farm. Croc meat generally being a by-product of the crocodile skin export market, which he’d noted is in decline.

This I confirmed online: that luxury brands are cutting back on exotic skin products in light of ethical and animal welfare concerns.

Turns out Zuma is game and adventurous.

He points me along the highway in the direction of Pietermaritzburg. “There,” he says, indicating a dirt-road track, which leads to a locked gate.

After a couple of false starts, we bump along through some fields of veggies till we come upon a clearing with a shed, a small house and a man in a van.

A long conversation ensues between this man and Zuma, interjected with my, “Is the crocodile farm here?”.

Zuma’s gesticulations – lots of pointing and head-nodding – indicates he is checking and confirming directions.

Our new route doubles us back and after not too long leads us to another dirt road, which ends at a No Entry, Crocodile Abattoir, By Appointment Only sign.

I tell the gate man I’m a food writer interested in crocodile meat. What Zuma tells him is probably of more relevance to him. Because, friendly and welcoming, he signs us in. So we can drive a few yards then simultaneously glance to the left.

A couple of hundred crocodiles (they have 400 on the property pending their removal to a croc farm in Limpopo, we will hear) are swimming, climbing over each other, mainly sleeping under the African sun in and around a large concrete pool – one of several.

Some crocodile facts: Only the Nile crocodile (Crocodylus niloticus) occurs naturally in South Africa and eSwatini, and they are formidable predators. A large adult is capable of preying on the largest buffalo or wildebeest. Big males can weigh up to 700kg and have up to 68 teeth. They are capable of staying submerged for more than an hour.

At the end of the driveway we see the crocodile abattoir sign and track down supervisor Joram Ntlemo, a friendly and knowledgable man – Shangaan, originally from Limpopo – who has worked with crocs since 2004.

It’s true, he confirms. The bottom has pretty much fallen out of the international croc skin export market. The croc abattoir is no longer functioning as one. But there is croc meat for sale. With the demand for the meat, if anything, growing, they’re bringing it from Limpopo.

And yes. I can buy a kilogram of croc meat. Frozen. For R45.

From the croc farm we head for Pietermaritzburg. We have an address: 390 Boom Street. We pass auto shops and taxis and congestion. Then up jumps an inviting little culinary oasis in a rough-and-tumble low-tech industrial stretch of road. Primary colours and a welcoming sign.

Tsaurayi, 45, has been working with crocodiles for 20 years, which he calls “all my life”, having started from school in admin at a crocodile farm. He grew with the company – farm manager, then abattoir manager, initially in Zimbabwe; more recently at the crocodile farm we’ve just left.

Finally deciding to go on his own and, via his contacts, establish the butchery we’ve come upon. Which also operates as a shisanyama for those who want to buy and braai – or nibble on as we do when we sit down with him to chat and he produces a plate and tells Zuma and me to tuck in.

He also has an assistant, Zanele Nzuza, who makes a mean croc curry and phutu.

Initially, back in 2010, he sold croc meat door to door. It was unfamiliar to many. Now it’s acceptable and the demand is growing. It has become, he says, something of a Zulu and Sotho delicacy. Definitely African food.

The enterprising and congenial Tsaurayi makes crocodile wors and has ready-to-go packages of different fleshy bits from the carnivorous reptiles. He gets it in from Limpopo and from the crocodile farm we just visited and is supplying a growing list of clients.

There’s quite a lot online (and on laminated sheets in Tsaurayi’s butchery) pushing the health benefits of crocodile meat including tail: the best and priciest cut. There’s also, he says, a belief that rubbing on crocodile fat, for example, mixed into a cream, can cleanse you of bewitching spells and bad magic.

My first culinary croc experience was, years ago, at the Carnivore Club in Nairobi. And crocodile has long – and it seems intermittently – been on menus of upscale restaurants in and around Durban. The erstwhile Inchanga Hotel between Durban and Pietermaritzburg for a time had a pretty good restaurant that served up croc. It was on the menu of the long-gone Razzmatazz in Umhlanga (as was cane rat). My friend Caron recalls eating croc at Durban’s once-legendary Colony.

More recently, crocodile – marinated overnight in thyme and mustard and a wrapping of bacon, then pan-fried and served on a bed of crushed carrots, sweet potatoes and mussels in brandy – was served up at Big Easy Durban (Ernie Els’s place at the Hilton).

All this has made crocodile sort of like a delicacy.

It’s pretty refreshing to see it broaden in scope.

If you want to witness horrific cruelty to crocs (and perhaps wish afterwards you hadn’t born witness), check in on Google and watch the video made by PETA (People for the Ethical Treatment of Animals) on the torture endured during the slaughter of crocs in Thailand.

But Tsaurayi assures me the abattoir experience of crocs in South Africa is well-monitored and humane.

Thinking about the kilo of crocodile meat sitting in my freezer… Perhaps I will marinate it, then grill it and serve it up appropriately spiced in a salad with strawbs, feta and beetroot. Or perhaps I’ll start with a version of the buttermilk marinade I read about – with cumin, coriander, paprika, black pepper, thyme and parsley. That recipe recommends coating the crocodile strips in cornflake crumbs, then baking. Or perhaps I’ll just leave it frozen until the next time TGIFood Editor Tony Jackman visits, and leave it to him to come up with something for dinner.

Seems there’s plenty of scope for experimenting. Perhaps thanks to my unexpected midweek Midlands adventure, I’ll be eating more croc. And keeping out of their way so as not to get eaten by one of them. DM