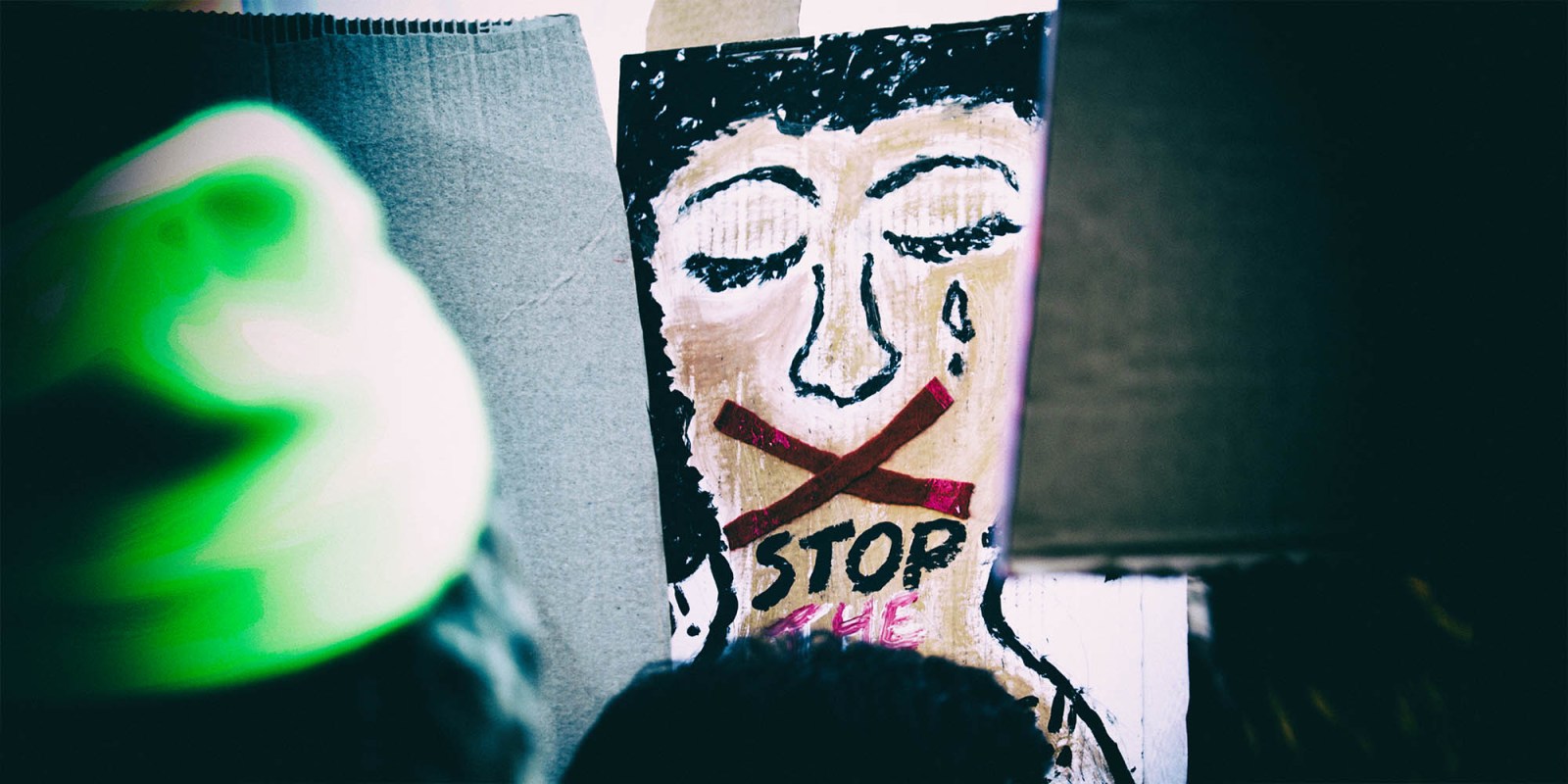 The public admiration artists enjoy primarily because of their art often saves them from the consequences of their actions, because it is hard to convince an adoring public that a person so talented and capable of producing beautiful works of art is also capable of the violence they have been accused of. Sex workers’ advocacy group SWEAT has challenged a decision by an art centre to exhibit a work by convicted sex worker murderer Zwelethu Mthethwa.

On 24 September 2019 the University of Pretoria revealed a newly built state of the art gallery. The Javett Art Centre at the University of Pretoria opened its doors with four inaugural exhibitions, as part of their opening showcase. One, All in Days Eye: The Politics of Innocence, is curated by Gabi Ngcobo with a team of three researchers, Donna Kukama, Simnikiwe Buhlungu and Tshegofatso Mabaso, and displayed work by convicted sex worker murderer, Zwelethu Mthethwa.

On 27 September 2019 SWEAT wrote a letter condemning the decision to display Mthethwa’s art and the use of ambiguous language in the caption that accompanied the art, which read, “In 2017 Mthethwa was found guilty for the brutal murder of sex worker Nokuphila Kumalo. For which throughout the court case, he maintained his innocence. He is currently serving time at Pollsmoor Prison in Cape Town”.

We (SWEAT) also asked for artwork to be removed from the collection out of respect for Nokuphila’s family and community. On 28 September 2019, the lead curator, Gabi Ngcobo, responded to SWEAT, read response here.

With our letter we have never sought to silence or bar conversations on ending gender-based violence like Javett-UP implied in their response, no matter how uncomfortable they are. To the contrary, we welcome the opportunity to have further discussions. We also do not doubt the intentions that the curators intended to prompt a conversation when they made their decision to display the artwork. We do, however, believe that it is terribly misguided to centre such a discussion on Mthethwa’s art.

We understand freedom of expression as an essential constitutional guarantee that extends to the right to exhibit artwork. We know the value of art as a crucial political tool in shaping discourse, informing, educating and at times beginning uncomfortable conversations, among other things. As activists and institutions who believe in a constitutional democracy, we accept that being offended or appalled is not a basis for the limitation of this critical right. However, we believe that there is a need to communicate our zero tolerance to gender-based violence, including the consumption of art produced by perpetrators.

In their response to our main ask, that the artwork is removed, the curator says “showing the work was not a decision we made lightly or without care. When speaking to violence’s existing within the collection, we did not want to preclude the urgent conversation about violent, toxic, masculinist tendencies that this work engenders”. The argument that the artwork has to be displayed for a conversation to happen is disingenuous. A conversation is still possible even when there is no artwork. There have been countless conversations about the misogyny in R Kelly’s music that is not centred on listening to it. More recently, a Nigerian artist withdrew from an exhibition in Johannesburg, and the space that had been allocated to him was painted “xenophobia”, and it was able to spark a conversation.

The curators also want us to believe that this exhibition is their contribution to fighting violence against womxn by using it to begin a conversation. They understood that they were dealing with a controversial subject. They knew or ought to have known that other galleries like the Iziko South African National Gallery have been requested to remove Mthethwa’s artwork, and they complied, but they nevertheless went ahead. In making the decision to exhibit, they did not think it was necessary to consult with Nokuphila’s family and community.

SWEAT’s consistent advocacy is a matter of public record. The arts industry has historically struggled to regulate and hold accountable artists who commit violence against womxn and act in ways which are socially irreprehensible. The public admiration that they enjoy primarily because of their art often saves them from the consequences of their actions because it is hard to convince an adoring public that a person who is so talented and capable of producing beautiful works of art is also capable of the violence that he has been accused of.

We do not request the removal of the artwork lightly. We understand the implications for people who acquire, exhibit or curate artworks and others whose livelihoods are impacted by the decision. However, we asked ourselves whether the general public stands to lose anything if the artwork is not seen. Other than your stated intention of beginning a conversation, we concluded that there is no pressing social need that will not be met if the artwork were to be removed. What will be lost is a significant opportunity to send a strong message that as a country that is reeling from gender-based violence we will not allow the public display of art that is created by people who murder women.

This will also set us back by reopening a conversation on whether Mthethwa’s art should be displayed; other galleries which understand the importance of our message have removed his artwork from their collection.

We have also asked ourselves about the severity of the offence that merits the removal of the artwork. When artists are accused of wrongdoing, there are often calls that they must be presumed innocent until proven guilty. Our stance on this question is also clear: where there has been a conviction in a court of law, the artwork should not be displayed. Mthethwa has been found guilty of murder, and it does not get more severe than that. The criminal justice system is vicious to victims and survivors of gender-based violence. On that rare occasion when it has been possible to hold perpetrators accountable, we believe that other people who are against gender-based violence and wish to send a message can use the conviction as a basis for disassociating themselves from the perpetrator’s art. We accept that there will be cases that present complexities, but this is not one of those.

This is a person who has refused to take responsibility for his actions or show remorse for his actions. The insistence that justice has prevailed because he is serving time is unhelpful. By continuing to display his work, so soon after the conviction, you are undoing the healing work. Victims and survivors of violence do not get justice from seeing the perpetrators convicted, and justice is more than a prison sentence. We live in a country that does not view gender-based violence as a problem and where lives like Nokuphila’s are routinely devalued. There is still a lot of public sympathy for Mthethwa who feel that he was unfortunate and received a bad deal. Displaying his artwork not only continues his legacy but introduces him to a new audience.

This request is an appeal to the curators, the gallery and the University of Pretoria to be a part of this growing movement that acts out of conscience, not fear of legal sanctions. We are only asking for the removal of the artwork by Zwelethu Mthethwa, who has been found guilty of the murder of Nokuphila Kumalo. DM

PS: Since SWEATs engagement with Javett Centre-UP and the curators hasn’t been successful; further action was taken and a petition was started to mobilise support for our demand, and to date 800+ people have signed.

Lesego Tlhwale is the Advocacy Manager at SWEAT.