Boks and Italy square for most important clash in brief...

Boks and Italy square for most important clash in brief rivalry 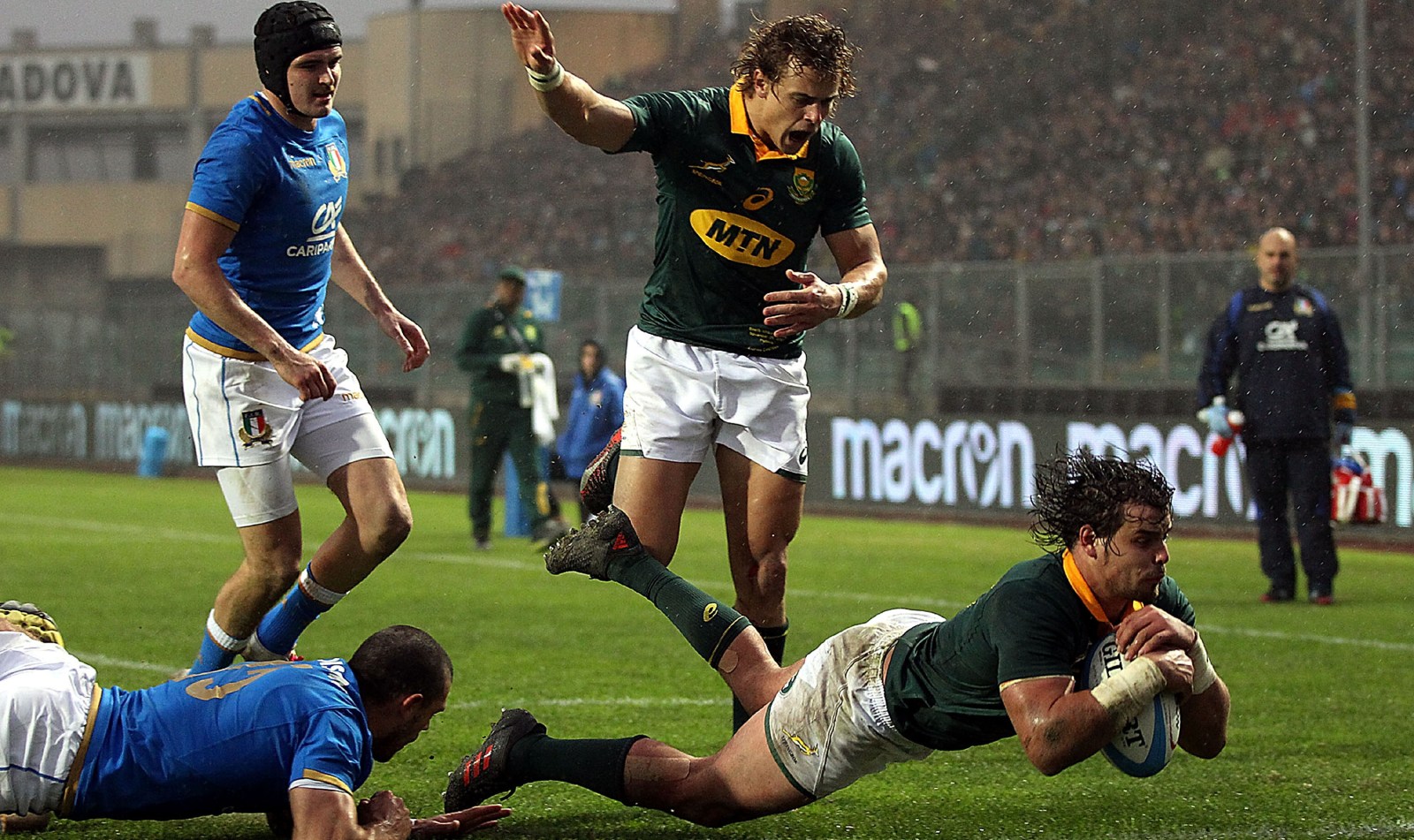 The brief rugby history between South Africa and Italy is colourful and storied but Friday’s Rugby World Cup Pool B clash in Shizuoka between the teams is the most important meeting of all.

This is the 15th time the two sides will clash and it’s the first on neutral territory. It’s also the most cut-throat because a place in the quarter-finals of RWC 2019 is on the line.

The average scores from the past, Italy’s only win over the Boks in 2016 and the Springboks’ 93% winning ratio from 14 matches against the Azzurri, are irrelevant tomorrow.

The contest is about winning what is essentially a knock-out game. It’s about the here and now. Nothing that has gone before between the sides will matter when English referee Wayne Barnes starts the match. Nothing that happens after will matter for the loser. The team on the wrong side of the scoreboard is going home early.

“I’m glad I’m off the pitch and not on against them. You need heart and courage to play South Africa and I know our team’s got those in spades-full.

“The pressure is firmly on South Africa. They are expected to win the World Cup. No one thinks we have a hope in hell, and we have to go out and prove them wrong.”

O’Shea wasted little time in trying to heap pressure on the Boks, but you only have to go back six days to know that the favourites’ tag means little.

Of course history tells us that the Boks are overwhelming favourites to win. But history also told us Japan had statistically almost zero chance against Ireland last week. Nor did they against the Boks in Brighton in 2015, and look what happened.

Those are cautionary tales to keep Springbok minds focused. If there is one thing the Boks can take from the recent past, it’s that nothing can be taken for granted.

Which is why coach Rassie Erasmus has prepared the side for this match for months. When the draw was made nearly two years ago, and South Africa’s name came up in this Pool, Erasmus circled two fixtures in red – the All Blacks in Yokohama and Italy in Shizuoka.

They were the matches that stood in the Boks’ path to the second round of RWC 2019.

“Now it is the real deal, it is not a practice situation any more,” Erasmus said. “We have been building for 20 Test matches towards this point. This is do-or-die. Players feel it. I have to admit that I do have butterflies.

“Plus they have had an eight-day turn-around and have been building towards this game for a year and a half.

“They’ve played and beaten the other smaller teams in their pool, now they can throw the kitchen sink at our game. So we are going to have to be smart and show composure and apply what we have learned when it comes to winning the big moments.”

After losing 23-13 to the All Blacks in their RWC 2019 opener two weeks ago, the Boks ramped up analysis of Italy. New footage of Italy’s performances at this tournament has given the Boks analysts more to ponder.

Even if the Boks had beaten the All Blacks, their dedication to picking apart Italy’s game in darkened rooms would’ve been intense. But it has bordered on manic in the past 10 days.

“They are quite clever I haven’t slept a lot in the last three days,” defence coach Jacques Nienaber told the media this week.

“The Italian coaches are students of the game and they have been involved in it for a long time and they make good plans. Obviously they will challenge us.

“They’ve got a good pack and good backs as well. I’ve been lucky enough to coach against teams like Benetton and Zebre in Europe and their rugby has grown.

“Their forwards will maul well and they’ve got a good scrum. If you look at their launches from scrums in the Six Nations against teams like England, they ‘cut’ them, put them under pressure.

The reality is though that the last time Italy beat a Tier One nation (considered to be the 10 teams that feature in the northern hemisphere’s Six Nations and the southern hemisphere’s Rugby Championship) was against the Boks in Florence in 2016.

It was their only win over a Tier One team in the cycle between RWC 2015 and the current tournament in Japan.

Statistically, based on matches at this World Cup, it’s difficult to compare the sides. Italy have played Canada and Namibia, winning both comfortably. The Springboks have played the All Blacks, which skews direct comparisons.

But there is no doubt that the Italians pose a tough forward challenge, which is why Erasmus has loaded his bench with six forwards. There are only two reserve backs.

Italy are not a team that will run the Boks off their feet in a way a side like Fiji might if the game becomes loose. The Italian challenge will come directly from conflict between the packs and the kicking game of the halfbacks.

With the forecast for rain added to the difficulties of ball handling in the humidity, Erasmus has gone for a heavy, less mobile pack than the one that ran Namibia ragged last weekend.

It’s an understandable ploy considering the Italians are taking a similar approach. They have a massive back row, which features veteran No 8 Sergio Parisse in a record 142nd Test appearance.

Cradock-born looseforward Braam Steyn will make his 35th appearance for the Azzurri alongside Parisse where his powerful ball carrying will keep the Boks honest.

O’Shea, only half in jest, suggested he would’ve only put forwards on his bench if he could have.

“We’re looking forward to it. It’s going to be physical, and we’ve picked players who can interchange, no matter what numbers are on their backs.

“We did discuss going 8-0 on the bench because of what promises to be a forwards battle, but we’ll leave that for another day.”

This won’t be a wide-open match initially. It’s going to be more like two heavyweight boxers slugging it out.

Chances will present themselves though and the Boks have to be clinical and patient enough to pick their moments and to take them.

“It’s quite clear what the game plan is and the players know what we need to do – it has been fully coached into us. I don’t need to say anything,” Bok captain Siya Kolisi said on the eve of the match.

“Every game is a knockout game for us now – if we slip up we’re out of the competition so we’ve been incredibly focused.”

The time for talking is over. DM