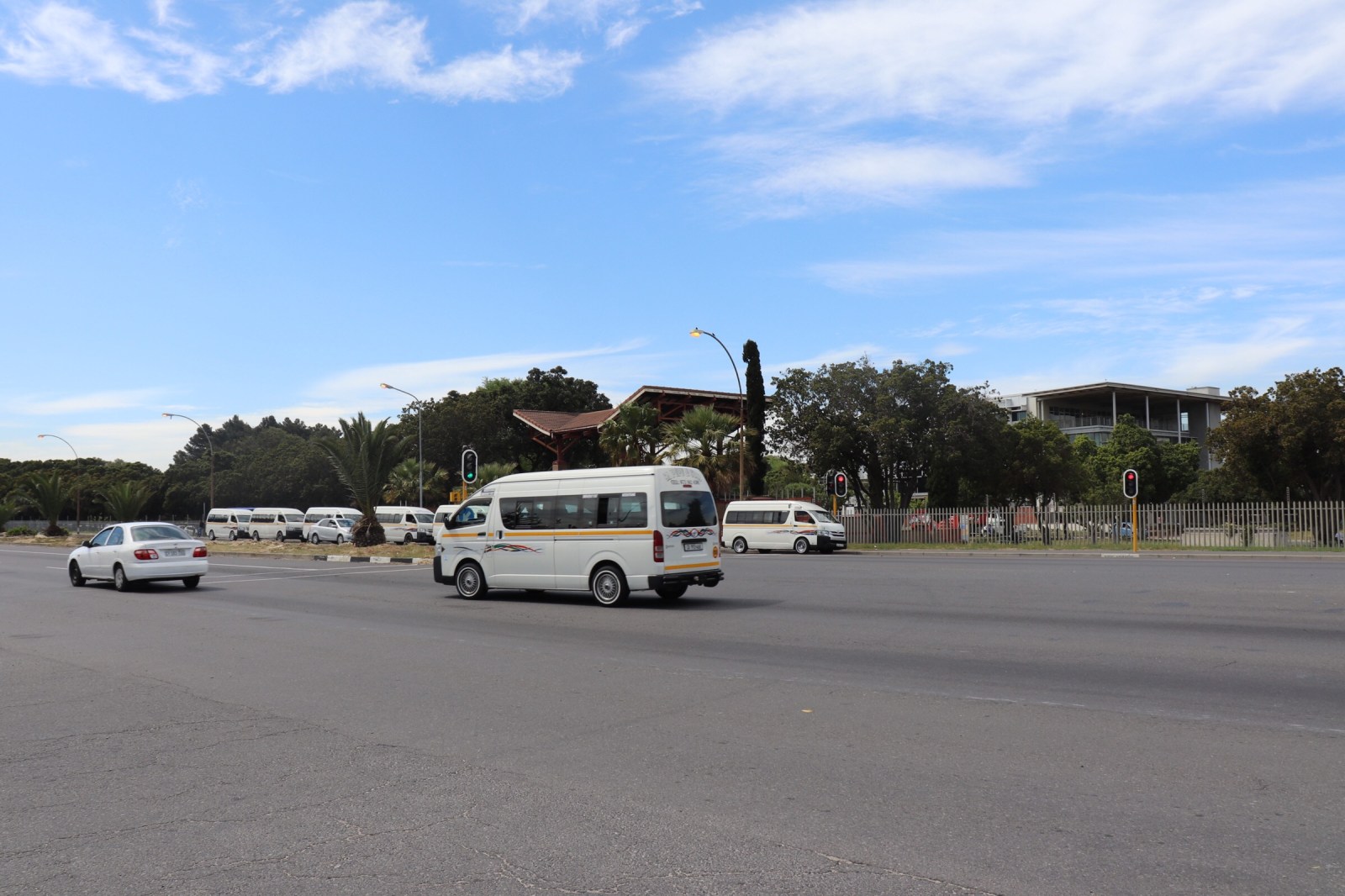 Uber drivers claim they are harassed outside of the University of the Western Cape in Bellville. Photo: Aisha Abdool Karim

“First I was hijacked at gunpoint, then a week later a [minibus] taxi guy is saying he’s going to impound my car,” says Uber driver Tawonga Chifamba. “It’s a lot we’re going through as Uber drivers.”

Chifamba has been an Uber driver for the past two and a half years.

On Wednesday, 25 September, he had just completed a trip at the University of Western Cape in Bellville. It was about 4:30 pm when he pulled over on the side of the road opposite the main gate to wait for his next trip with a group of five other Uber drivers.

Chifamba figured he would have about 15 minutes before his next trip and began washing his car. Then a minibus taxi driver came over and began taking the keys from the ignition of every car parked there.

“He told us: ‘This is not your rank’,” recalled Chifamba. “He continued, saying: ‘You Uber drivers don’t have to park anywhere, this is our route, this is our rank’.”

The minibus taxi driver then refused to return the car keys and insisted that each driver give him R500.

As this was happening, another Uber driver arrived. The minibus taxi driver then went over to him and threatened to break the window to get the key of the car, according to Chifamba. The Uber driver panicked and began driving away at high-speed towards Robert Sobukwe Road, where he met with an accident after not seeing an oncoming vehicle.

The minibus taxi driver then ran away, leaving everyone’s car keys behind. Chifamba believes that he ran away because “he knew the police were coming”.

“This is what they are actually doing to Uber drivers,” said Chifamba. “At a mall or anywhere they can see that you are Uber drivers, they come and harass you.”

“These [minibus] taxi guys are taking everything into their hands and doing whatever they want on the road. I don’t know who’s going to help us in this industry.”

Although this was the first time Chifamba had experienced something like this since he started working as an Uber driver, it has been happening to Uber drivers more frequently.

“Now we don’t drive to Khayelitsha and Gugulethu,” said Lawrence Ndlovu, who has been an Uber driver for five years. “We’re scared even to drive in Bellville. Those guys are just targeting us.”

Ndlovu had his own encounter outside the University of Western Cape with two men who said they were from the taxi association and were going to impound his vehicle. “I said I want to call the police and that’s when they started to harass me, and tell me to give them money,” said Ndlovu.

Ndlovu said the men threatened to beat him up and then took his phone and the cash from his wallet, which was around R500, before leaving.

Although Uber does not release official figures on the number of drivers, it is estimated that there were around 4,000 Uber cars in Cape Town in September last year, according to an article in The Atlantic.

GroundUp has received messages from ten other drivers working for e-hailing companies who have been stopped by minibus taxi drivers demanding they pay money to continue operating in the area. However they did not wish to have their names published.

Drivers have begun relying on Whatsapp groups to communicate and report incidents in order to warn each other about areas to avoid.

Molelekwa said SANTACO is “aware of taxi operators, particularly meter taxi operators, who are disgruntled about Uber operations”, but said the council “strongly condemns use of violence as a solution”.

GroundUp requested comment from the Cape Organisation For The Democratic Taxi Association (CODETA) via e-mail on Tuesday after being unable to get through on the phone. By the time of publication, no response had been received and subsequent phone calls were unanswered.

An Uber spokesperson said: “While these incidents are isolated, the safety of our riders and driver-partners is a top priority. Our Law Enforcement Relations Team are on call to work with police at any time to respond to urgent needs, however, we encourage Uber driver-partners and riders to report any incidents of intimidation to Uber and the police to ensure these issues can be resolved.”

“We have number of safety features available to those who use the Uber app such as access to an In-App emergency assistance button and 24/7 in-app support. We also have an Incident Response Team (IRT) who are available 24 hours a day, 7 days a week to respond immediately to any reported incidents.”

This article has been amended to include comment from Uber and to make it clearer that the taxis involved are minibus not metred ones.

Abdool Karim is a Daily Maverick intern seconded to GroundUp for a month.