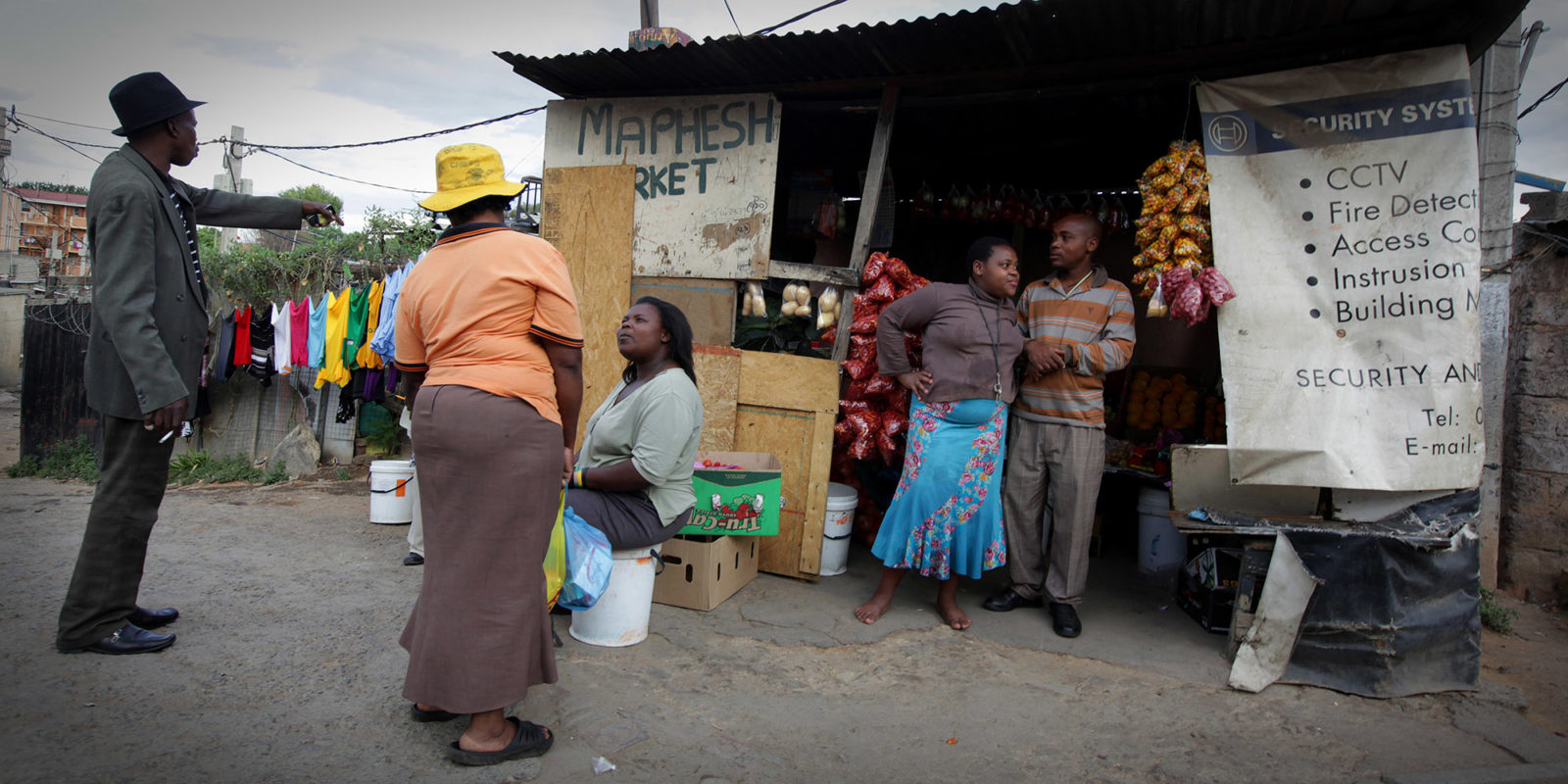 It is time to take a much more careful look at supermarkets which use their market and corporate power to push smaller players and SMMEs — South African and foreign-owned — out of South Africa’s township economy.

A new report on retail competition in the informal sector casts light on structural changes that have contributed to the particular forms of xenophobic violence in townships in recent years.

The report, produced by the Sustainable Livelihoods Foundation NPC (SLF), the Centre of Excellence in Food Security (CoE-FS) and the Institute for Poverty, Land and Agrarian Studies (PLAAS), is based on research conducted by SLF in 2017-18 on 1,180 township grocery retailer outlets across all nine provinces for the South African Competition Commission, the Economics of Tobacco Control Unit at the University of Cape Town, and the CoE-FS.

While popular attention and the media have focused on the “identity politics” that pit poor South Africans and foreigners against each other, our report suggests that these interpretations miss other important parts of the story: the changing competitive dynamics within the informal retail grocery sector, on the one hand, and the rise of supermarkets trading into the township economy on the other. These changes have had profound impacts on the traditional spaza shop business, which historically represented one of the main economic opportunities for household micro-enterprises.

Our research found that the structural change has been driven by large business, notably corporate retailers and independent retail groupings. While it is obvious that supermarkets bring some benefits such as cheaper food and an increasingly diverse range of groceries, they also initiate a competitive “race to the bottom” that squeezes profits — and therefore livelihoods — out of micro-enterprises in the informal retail sector.

As a result, South Africa’s spaza sector has been completely reorganised. The owner-operated spaza shops familiar from previous decades are now largely a thing of the past: their place has been taken by larger networks of “vertically integrated” shops acting as retail outlets for wholesalers and warehouses that supply most, if not all their stock. The people working behind the counter in these outlets are typically no longer owner-operators. Instead, they are mostly employees — who, we learned, often work under grim and exploitative conditions outside the protections of South African labour law. In addition to working excessive hours for pitiful pay, they are often vulnerable and isolated, facing crime and xenophobic hostility in their daily lives.

The backward linkages from these shops and their upstream wholesalers reach deep into the formal sector: to higher-level importers, wholesalers, and manufacturers desiring access to these markets — in some cases aided and abetted by corrupt politicians and government officials who are only too happy to turn a blind eye to the existence of profitable large-scale retail networks operating in the informal sector.

The changing nature of township grocery markets and the rise of new forms of spaza networks pose important regulatory challenges. While traditional “survivalist” spazas operated in the informal economy from sheer necessity — being unable to comply with the requirements for business registration — many of these new larger businesses choose to fly below the radar, benefiting from the flexibility that informality affords. Like formal corporate businesses, they can use their relative size to achieve efficiencies and economies of scale, offering cheaper goods and a superior customer experience for township consumers.

But those in charge of these businesses also exploit the lack of regulatory oversight of the spaza sector, for example by violating labour standards, and by trading in contraband (notably cigarettes) and sometimes counterfeit goods, with township consumers and even the outlet employees apparently being none the wiser. Meanwhile, supermarkets and shopping malls exploit their corporate leverage to buy strategic township land and attain municipal business zoning — actions usually unavailable to township residents — in order to compete in local grocery, liquor and fast food economies.

In this dynamic context, framing economic competition as simply being about “South Africans versus foreigners” is unhelpful.

First, this is based on superficial and mistaken understandings of the sector dynamics: we found that the “informalist” evasion of law is practised by South Africans as well as foreigners.

Second, it directs attention at inappropriate targets: while foreign shop workers are the public “face” of the new spaza sector, they are also the most exploited and vulnerable part of this new form of retail organisation from which powerful and well-connected business owners (including many South Africans) are directly benefiting. Similarly, framing this as an identity issue lets the supermarkets off the hook for their role in this new dynamic.

Third, framing the situation as one in which entrepreneurial foreigners are simply outcompeting undynamic “locals” can lead to dangerous and counterproductive policies. Recent proposals, for instance, that foreigners should be “kept out” of certain economic sectors are a case in point. Such changes are likely to amount to an unconstitutional violation of foreign businesspeople and investors’ economic rights. And they miss the point that government already possesses the necessary means to address the negative consequences of regulatory evasion.

Rather than target small shopkeepers, our report suggests government should use the legal means it already has to ensure compliance with South African law among large scale informalist retail networks — irrespective of the nationalities of their owners.

Importantly, this intervention should not focus on the vulnerable people who work in the spaza shops themselves. Rather, attention is required at the apex of grocery markets, focusing on the power structures, networks and individuals that have come to dominate the sector. This includes wholesalers, manufacturers and importers capitalising on regulatory avoidance or supporting corrupt state officials. Each of these stakeholders has, through their actions and omissions, supported the evolution of the market conditions to this point.

Furthermore, it is time to take a much more careful look at the practices whereby supermarkets use their market and corporate power to push smaller players and SMMEs — South African and foreign-owned — out of South Africa’s township economy. Their competition in the fast food, fresh vegetable and liquor segments reduces opportunities for the small businesses previously long-established in these markets.

Finally, government must do more to recognise the informal economy (which collectively employs more people than any individual sector) and embrace the opportunity it represents. With township settlements being the epicentre of population growth, it is critical that these local economies are stimulated in ways benefiting all small-business entrepreneurs, employees and consumers. DM

Andries du Toit is the director of the Institute for Poverty, Land and Agrarian Studies (PLAAS) and a professor at the University of the Western Cape. He has done extensive research on the political economy of structural poverty and racialised inequality in South Africa.

Leif Petersen is a social entrepreneur and social ecologist. He is the director of the Sustainable Livelihoods Foundation and his range of research pertains to people and the environment, informal economy culture and business practice.