From liberation to authoritarianism? From Russia to Africa with Love 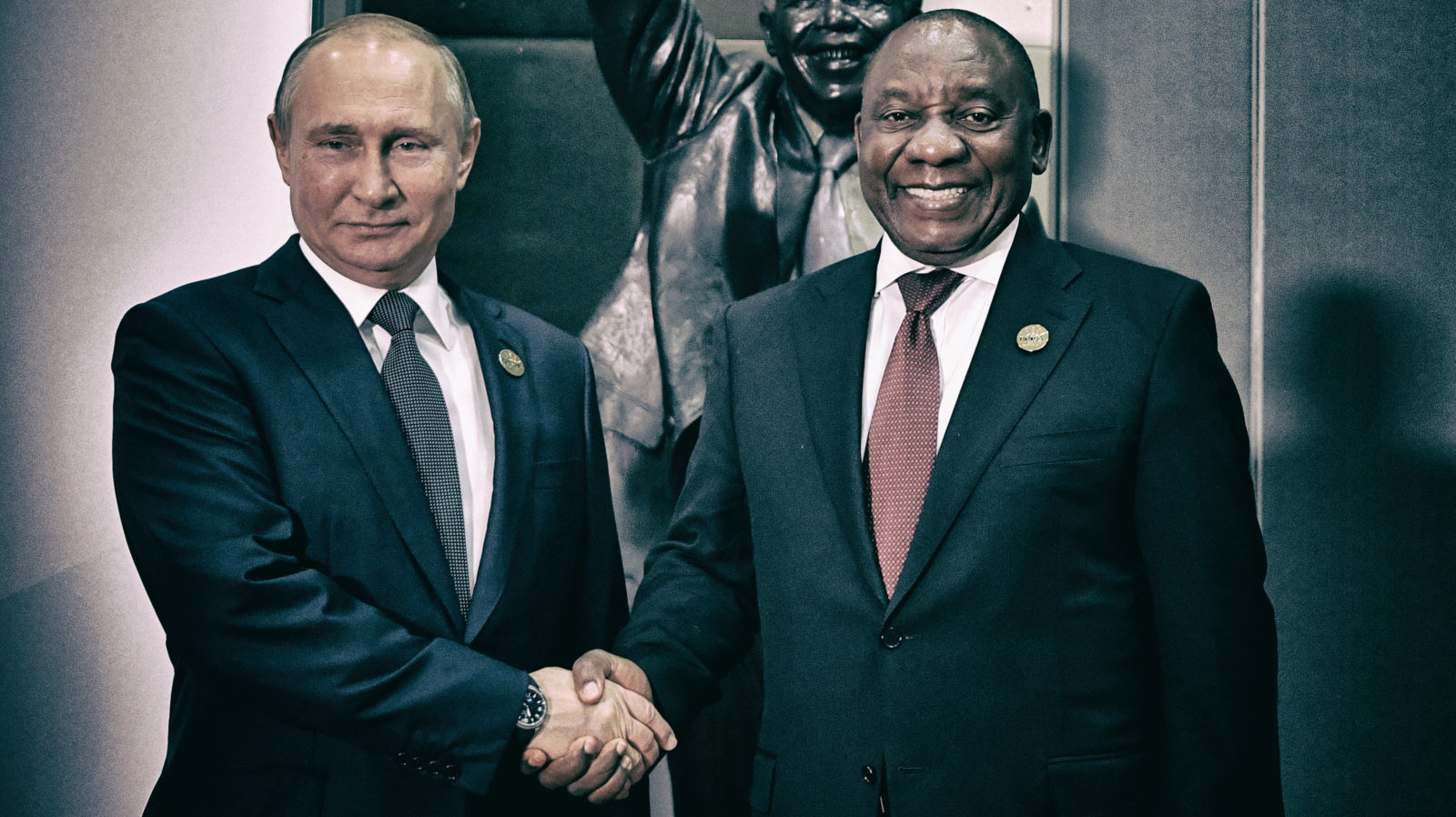 This past week the 16th Valdai Conference was held in Sochi, an event closely linked with Russian President Vladimir Putin. In the run-up to the Russia-Africa summit, on the agenda was Africa as a ‘very dynamic, promising also highly explosive territory’. Just what is Russia’s aim in Africa?

African elections today encompass all these things, and a few more. As electoral competition has intensified, and governance is “weaponised” as the most powerful tool of democrats against dictatorial regimes, so too has the range of electoral dirty tricks widened and intensified.

Some outsiders prefer the old system of dealing with a big man, free from public scrutiny. It’s less hassle and offers more short-term profit, at least for them.

In his testimony before the Senate Armed Forces Committee in February, then head of the US Africa Command General Thomas Waldhauser noted “the harmful influence of non-African powers on the continent”. Both the general and his successor Stephen Townsend spoke of the “malign” influence of China and Russia.

They would say that about their traditional rivals, wouldn’t they? But according to recently leaked documents, there is substance to these claims beyond strategic suspicion and competitive national interests.

In October, more than 50 African heads of state are expected to attend the Russia-Africa summit in Sochi to be co-chaired by Putin and Egypt’s president, Abdel Fatah al-Sisi. But this grand occasion is only the tip of the relationship iceberg.

Underneath, details of Russian activities to strengthen influence were disclosed in leaked papers published by the London-based Dossier Center, an investigative unit funded by the exiled Russian tycoon Mikhail Khodorkovsky.

These documents detail attempts to turn Africa into a Russian hub led by Yevgeny Prigozhin, a close Putin ally known as “Putin’s chef” because of his catering contracts with the Russian state. His “political strategists” are reportedly active in 20 African countries.

Ironically, Prigozhin and the Internet Research Agency, a St Petersburg-based internet troll farm, has been sanctioned by the US Treasury on the grounds of interfering in the 2016 US presidential election. The Treasury found that in 2017 and 2018 Prigozhin’s private jet “conducted numerous flights throughout Africa, the Middle East, and Europe to include Sudan, the Central African Republic, Madagascar, Ethiopia, Libya, Syria, Lebanon, the United Arab Emirates, Armenia, Germany, Spain, and Russia”. In September 2019 the Treasury announced new sanctions against Prigozhin for attempting to influence the 2018 US mid-term election.

The aim of Russia’s renewed Africa interest appears primarily to be the economic benefits. No doubt the resultant irritation and distraction of the West is an added bonus, the timing of these initiatives driven in part by Western sanctions imposed over Russia’s 2014 annexation of Crimea.

More ambitious, but less realistic, is the long-held ambition of Yevgeny Primakov, the late Russian foreign minister and prime minister who saw Africa as a means of creating an anti-Western bloc whereby Russia could regain its Cold War glory.

Russia seems to be interested in supporting old friends – and making a few new ones.

Certainly, Russia has an influential African alumnus. Many among Africa’s leadership cohort studied in the East Bloc during the Cold War, including President Joao Lourenço of Angola. Absent any colonial role, the Soviet contribution to the liberation struggles is still celebrated in some African capitals.

According to the leaked documents, Russia is seeking to bolster its presence in at least 13 African countries by building relations with current and future regimes, military agreements, and the grooming a new generation of “leaders” and undercover “agents”. Deals with Mozambique and the Central African Republic are among 20 military relationships already established by Moscow, centring on arms sales, intelligence sharing, and police and army training. The wars in Chechnya, Syria and Ukraine have provided the Russians with a certain set of skills.

Such state dealings are beefed up by the presence of Russian mercenaries and “consultants”, whose role is linked with a pernicious local political economy.

General Waldhauser noted to the US Congress that in the Central African Republic:

“Russia has bolstered its influence with increased military co-operation including donations of arms, with which it has gained access to markets and mineral extraction rights.” He went on to note that:

“With minimal investment, Russia leverages private military contractors, such as the Wagner Group,” observing that the CAR’s president had had recently installed “a Russian civilian as his National Security Adviser”.

“The president also promised the armed forces would be deployed nationwide to return peace to the country by forces likely trained, equipped, and in some cases, accompanied by Russian military contractors. Russia’s ability to import harsh security practices, in a region already marred by threats to security, while systematically extracting minerals, is concerning.”

Waldhauser cited the murder of three Russian journalists in CAR in July 2018 while investigating the activities of the Wagner Group, their mission funded by the Dossier Center.

CAR is not alone. Madagascar’s intelligence service is a reported beneficiary of intelligence co-operation spearheaded by Nikolai Patrouchev, the secretary of Russia’s National Security Council.

Rosoboronexport, the state-owned defence-sales company, declared 2019 to be the “year of Africa”. According to the Stockholm International Peace Research Institute (SIPRI), Russia supplies some 35% of Africa’s materiel needs, ahead of China (17%), the United States (9.6%) and France (6.9%). Russian weapons are cheap, reliable and easy to use. And it helps that Russia is willing to forgive debt and bring in sophisticated financing options.

There have also been attempts to attract nuclear power deals, notwithstanding the setback in SA. State-to-state business deals offer a means both of bolstering political support and economic benefit.

Moscow’s trade with Africa has tripled from $5.7-billion in 2009 to $17.4-billion in 2017. This is way behind China, of course, which has increased two-way trade from less than $1-billion to more than $170-billion in the past 30 years. Russian investment, too, is steadily growing, totalling more than $17-billion.

Not unlike the trillion-dollar Chinese Belt and Road initiative linking Asia, the Middle East and Africa through a network of roads, rail lines, ports and pipelines, the Russian toolkit includes road and rail-building schemes, from a trans-continental railway spanning Senegal to Sudan and a road from Sudan to Cameroon.

It’s not all about hard power.

Russia is learning from China in shaping an African narrative in its favour. The number of Chinese-government-sponsored Confucius Institutes in Africa, which promote Chinese language and culture, rose from zero in 2004 to 48 in 2018 across 20 African countries. The Russian equivalent, Russkiy Mir (Russian World) Foundation, is active in nine African countries.

There are more sinister soft-power aspects, however.

Anti-Western sentiment is whipped up not least through media outlets such as the multilingual RT TV, and through sponsoring African NGOs, websites, and news services, where the narrative aims to discredit pro-democracy and anti-corruption campaigners as foreign agents.

One of the leaked papers recommends collecting a database of Africans living in the West, as the basis for grooming “future leaders” and “agents of influence” with an eventual goal of a “loyal chain of representatives across African territory”.

France, if the documents are to be believed, is a particular target in this regard, with Moscow keen to exploit tensions with Paris’s traditional allies including CAR and Comoros.

Further up the spectrum, another means identified is to set off “pro-Western” uprisings to turn public opinion in the opposite direction.

In Sudan, notes a report in The Guardian on the leaked documents, “one ploy was to use fake news and videos to portray demonstrators in Khartoum and other Sudanese cities as ‘anti-Islam’, ‘pro-Israel’ and ‘pro-LGBT’.” The Sudanese government was also advised to increase the price of newsprint to make it harder for critics to get their message out “and to discover ‘foreigners’ at anti-government rallies”.

Rajoelina has denied receiving such help.

Africa’s authoritarians have an interest in any assistance which does not improve governance and secures their grip on power.

Instead of promoting greater competition in Africa (which would be a good thing), the current Russian and Chinese strategy of favouring incumbents, whatever their governance niceties, pitches them against local electorates given the overwhelming majority of Africans today prefer democracy to any other form of government.

The problem for African democrats is that they receive very little support from outside.

Rather than simply play to Western paranoia, and feed African corruption, the Russians should provoke several wake-up calls.

There is more to African engagement than the poles of counter-terrorism at one end or traditional development assistance at the other. The Russians have a good point with their incentivisation of African countries. While Moscow rewards loyalty, according to the leaked documents, by propping up dictators, fiddling elections and selling arms, the West has a more powerful tool in aligning support to democracy.

To do this, Western countries need to play catchup to Russia (as well as China) in actually delivering a strategy and the tools to achieve it. Such support with sharp teeth would include bolstering support for parliamentary oppositions and monitoring closely – with intelligence systems more than well-meaning but mostly limp-wristed observer missions – election processes which are matched with a will to call them as they are, and not as Western capitals might prefer them to be.

The Kremlin’s strategy towards Africa works, Edward Lucas reminds, not because Russia is strong, but because the West is weak – and, also, not especially strategic. The UK is increasingly diplomatically invisible on the continent, except for its attempts to seal post-Brexit trade deals in a hurry; while the US approach risks internationalising local conflicts where they are driven more by intricate domestic issues. And less we forget: Russia’s foreign policy direction is often in tune with the views of many African leaders, who still hate to be bullied by the “suits” visiting the continent on two-day expeditions.

Changing this demands engagement, not neglect.

For Africa, it should provoke thoughts about how to get the most of out all suitors, even as its leaders lap up Russian hospitality and Sochi’s hot springs.

Spookery, dogs of war, and arms are not, if the track-record of history is anything to go by, in the interests of the vast majority of Africa’s citizens, given the close correlation between standards of democracy, governance and economic performance. DM