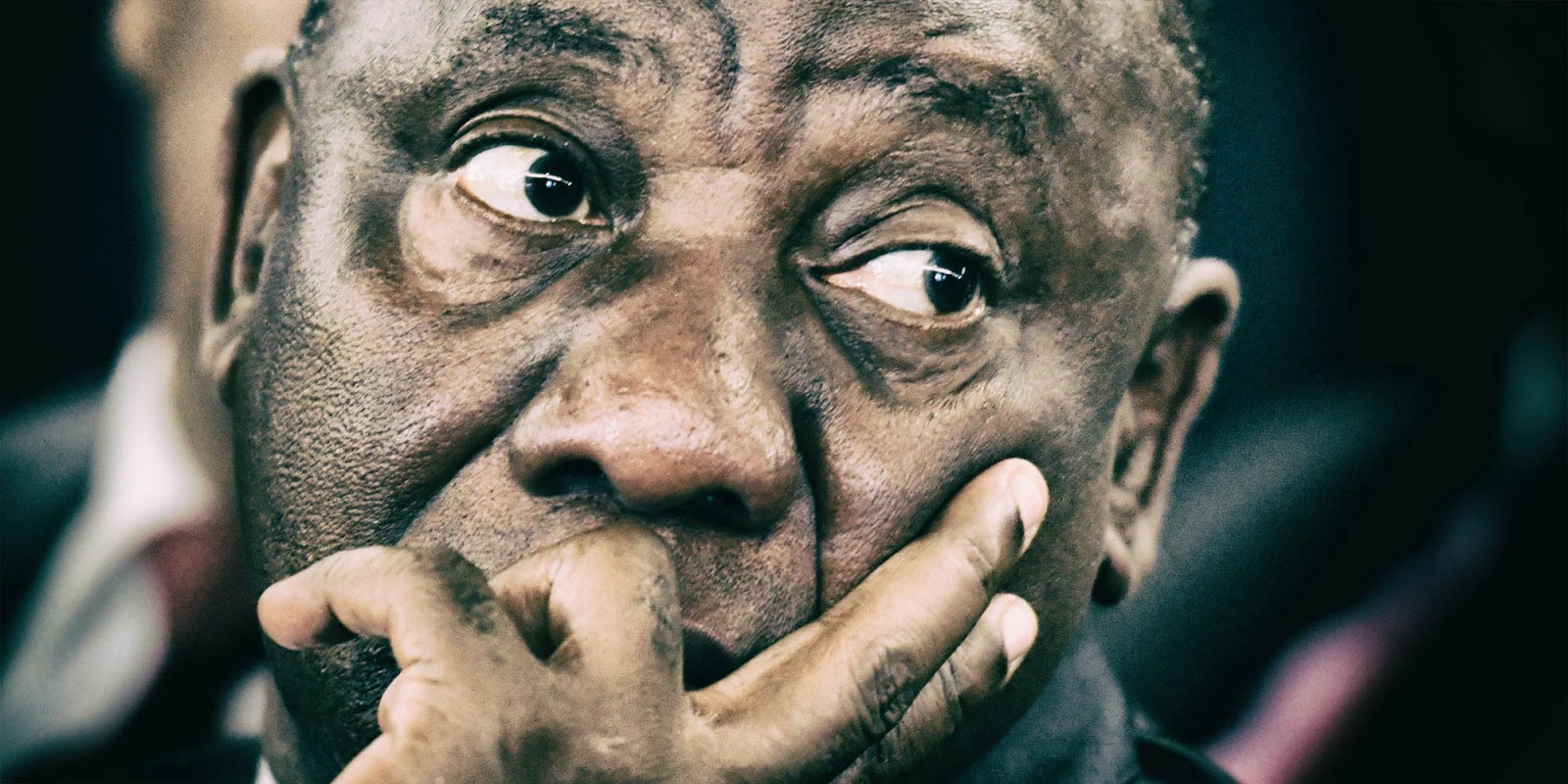 One of the reasons Cyril Ramaphosa needs outside advisers is that the ANC has not produced a single original policy paper in 15 years. That is a sign of intellectual decay, six feet underground, way below the tombstone placed by the Zumaites in Mangaung.

Did President Cyril Ramaphosa attend the ANC’s 2012 elective conference in Mangaung? Oh yes, he did.

He came on the first day in a Pringle shirt, and someone had to hurriedly get him a no-name brand T-shirt so he could appear equal with others and shed his billionaire image. He also got to pose, in this new, wrinkly, fresh-from-the-plastic-bag T-shirt, probably Chinese manufactured, with Mathews Phosa and Tokyo Sexwale, the alleged co-conspirators outed a decade earlier by Steve Tshwete, the Rottweiler of the Mbeki era.

Ramaphosa later moered them to the post of deputy president to Jacob Zuma.

I doubt he would have followed all the resolutions taken at the conference when Zuma clinched a second term with a 75% majority. Significantly, slate politics ensured that people of Mavuso Msimang’s calibre were jeered and rejected in favour of nimble and ruthless modern ANC-style factional fighter dousers.

That conference made an important decision. People to be elected to the party’s National Executive Committee (NEC) needed to be party members (of course) with at least a 10-year leadership record.

What this means is that people like Mzukisi Qobo, Wandile Sihlobo, Thabi Leoka and Ayabonga Cawe would today not be in a position to take up roles as members of the party’s highest decision-making body. These are fantastic brains with great profiles. They are among the people to serve on Ramaphosa’s advisory committee announced in September.

The advisory panel boasts experienced figures such as Haroon Bhorat, a professor of economics and director of the Development Policy Research Unit, University of Cape Town, and Alan Hirsch, a veteran policy wonk who worked in the Nelson Mandela and Thabo Mbeki presidencies.

There’s nothing wrong with advisory panels. It’s pretty standard for presidents to have them. The question concerns their necessity. The Treasury is a constitutional instrument that runs the country’s economic policy, together with the South African Reserve Bank, their respective autonomy (on policy and legal basis) notwithstanding.

Presidents need to rely, among other things, on the work of the Treasury, including its economic policy unit, for other areas of government that thrash out information on economics.

He has his own full-time advisers, who have their own offices. That’s also fine and necessary, so the president can be served by minds that are independent of the Treasury. The Cabinet has its own economics cluster. And the minister of finance. The incumbent, Tito Mboweni, has to compete for policy space with the monsters that run portfolios such as economic development, trade and industry, and foreign policy, which, in the era of Boris and Trump, is a contestation about tariffs and taxes.

Ramaphosa missed a great opportunity after the 8 May elections to cut the Cabinet right down to size so that ministers such as the lady with a hole in her head could go home to rest or plug the hole. Under Zuma, she was in charge of the whole economics culture (as the minister for land and agrarian reform). Imagine. Now, she is the minister of everybody-but-men.

In a revolutionary world, the ministry of women, children and abused could lead to landmark policy changes. It could be a key voice in creating policy that gives meaning to the mantra of abolishing poverty and femicide, or creating a society where not just equality is sought, but where equity is at the centre.

South Africa could be a world leader in this, considering its social problems and their unique elements.

But Ramaphosa being Ramaphosa, he opted for a Zuma-style Cabinet in both size and form. Remember, Zuma gave South Africa a reputable Cabinet, at least in his first term, despite its bloated nature. He also had many advisers, including globetrotters such as the US economist Joseph Stiglitz.

They were professionally crushed and spat out of the system by the toxic nature of his bureaucracy. When the Zupta machine finally kicked into gear, there were very few advisers keen to work for his state.

Back to Mangaung. That conference erected a tombstone over the ANC’s intellectual vault, so that fresh thought can never be associated with the ANC again. The 10-year resolution means a fresh mind such as Sihlobo or Cawe could not be enticed to stand for an NEC post.

As a result, Ramaphosa has to circumvent the problem by having them as his advisers, which is on the periphery of the real policy space.

Fact is, Ramaphosa has failed so far to bring into his ANC anyone who was repelled by the Zuma-ites. The likes of Qobo are fearless thinkers who prefer concrete evidence to hyperbole. Imagine someone like him attending an ANC conference. Even a branch meeting. These guys would never last a minute at a branch meeting, where a wagging finger and scream of, “You are out of order, Chief,” has proven to be the most effective rebuttal to any policy idea.

The ANC has not produced a single original policy paper in at least 15 years. That is a sign of intellectual decay, six feet underground, way below the tombstone placed by the Zumaites in Mangaung.

So stinky is the situation that Ramaphosa doesn’t want to pay this area a visit. He chooses to keep it at arm’s length and remote-control all the policy advice that comes in from the comfort of the Union Buildings in Pretoria or Tuynhuys in Cape Town.

Here’s the problem. His second term will be a different kettle of fish. The economy won’t have reached fast enough growth levels. Unemployment will still be at crisis levels. The all-crushing political gandaganda (colloquial South African for excavator or bulldozer) will be purring nicely, ready to see his backside. The intellectuals in Italian suits won’t be able to convince anyone of the wisdom of their policy medicine.

Whoever will have been hired to play the role of an ANC branch delegate will be the only voice that matters.

Ramaphosa will have wasted all these great minds’ time. And it will be back to square one.

As long as Ramaphosa does not read the diagnostic reports produced under his watch, as the deputy chair of the National Planning Commission, he is simply playing intellectual marbles. The diagnostic report and its subsequent remedy, the National Development Plan, highlighted our dysfunctional politics as a hindrance to change. This has to be tackled head-on.

Alas, reforming the ANC is not on everyone’s agenda. Instead, the man who ought to give birth to a “New Dawn” is circling around the issue and will do so until his Ankole cows come home and in the process, he is writing his own political obituary. That gandaganda will come and crush the man who creates an elitist Presidency at the expense of Luthuli House or the Alliance.

And it will be a fallacious argument. But many will buy it. The same way they bought the fallacy that the Mbeki years were an elite project. DM