ANC fiddlers on a burning roof as governing party repac... 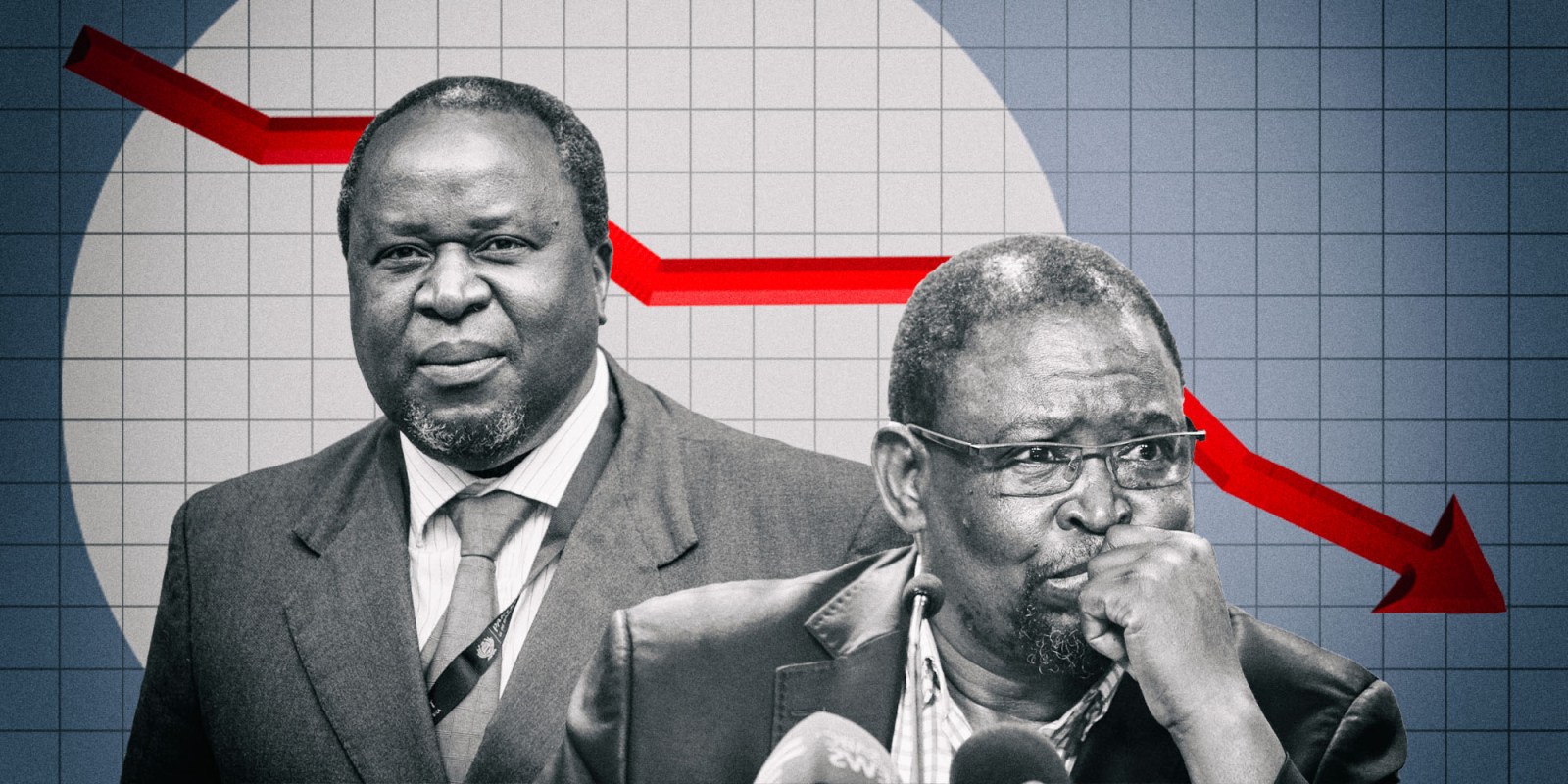 The governing ANC has announced a package of economic measures that leaves the door open for it to mean anything to anyone. It’s a face saving compromise everyone seems willing to live with - for now.

The key word to take away from Wednesday’s briefing is “package”. It defines what’s in right now and what’s not because it belongs in another package to be discussed at another stage, as ANC economic policy honcho Enoch Godongwana put it.

The “package” now agreed to by the ANC National Executive Committee (NEC), the governing party’s highest decision making structure between national conferences, is a range of “growth-enhancing reforms”, as the official ANC statement put it, before going on to list its parts without any detail as:

“Modernising network industries such as energy, transport and telecommunications and making them more cost-competitive;

– Increasing competition and lowering costs and barriers to entry for small business;

– Prioritising growth in labour intensive sectors, such as agriculture, tourism, clothing and mining;

– Refocusing industrial and trade policy to promote competitiveness; and

– Export promotion and enhancing growth opportunities in the African region.”

Such mirroring between the discussion document and ANC NEC statement could be seen to imply Mboweni’s call to action had been accepted. But that would be premature, and mistaken. A closer read shows no such decision.

Mboweni pointed to the relevant paragraph in the official ANC statement: “The NEC considered and agreed on a range of economic policy interventions to achieve a higher rate of economic growth and economic inclusion… There was a broad consensus across all presentations on the severity of the challenges and the key economic tasks of the moment”.

“So the question about some paper somewhere is answered,” said Mboweni in one of those comments that could mean anything before adding: “I’ll have things to say in my government capacity somewhere else”.

The ANC NEC agreed to economic growth measures are carefully padded in talk of “long-standing ANC policies”, the National Development Plan (NDP) that’s supposed to halve unemployment, inequality and poverty by 2030 and the May 2019 ANC election manifesto.

That election promises document, of course, also lists calls for prescribed assets, or government’s mandatory prescription of where at least a portion of workers’ pension funds must be invested, and nationalising the South African Reserve Bank (SARB), a policy win of the radical economic transformation (RET) brigade as the 2017 Nasrec ANC conference.

“I must say there are some elements not included because we are of the view they belong elsewhere,” said Godongwana on labour market reforms. “Those labour market reports are contained in the job summit agreements, which the ANC is not part of. Those matters are better dealt with at Nedlac (National Economic Development and Labour Council).”

Nationalising the Reserve Bank was “not part of this package. It fits into a different package” to be discussed at the mid-term ANC National General Council in about eight months.

Having a package for every occasion displays better PR spin than the verbal sparring that erupted over an agreed to SARB nationalisation comments by ANC Secretary-General Ace Magashule at the previous NEC briefing. Several days later in a highly unusual move President Cyril Ramaphosa in his capacity as ANC leader in early June issued a statement describing “the recent public spats about the mandate of the SA Reserve Bank as not being helpful, and mitigating and undermining the confidence of citizens and of investors”. The SARB would remain as is, even if public ownership was preferred.

ANC alliance partners’ criticism of the finance minister’s discussion document was raised – Mboweni and Godongwana had gone together to the ANC top six officials to clarify, it emerged at the briefing – but by the time of the NEC, “there was agreement we needed to move beyond processes to the real issues,” said Godongwana.

The real issues include a swathe of not so lekker economic data from declining confidence among business and consumers, worse than expected deficit numbers for August 2019 at R32.8-billion to slowing revenue growth. The SARB in September announced it had revised down to 0.6% South Africa’s 2019 economic growth rate that had been pegged at just 1%.

Tax collection is widely expected to miss the estimates projected in February’s Budget, amid retrenchments and tight spending by consumers watching their pockets. The petrol price is going up, again, and while officially inflation stands at 4%, the SARB told MPs on 12 September water price inflation stood at 12%, electricity 7.7% and rates and taxes by 9.5%.

The ANC NEC agreement on the not very detailed “economic recovery and transformation” – it suggests more infrastructure spending and Proudly South African support for local products – is crucial in that the factional détente on the economy is a good PR moment at a crucial time.

Wednesday’s announcement clears the way to the Medium-Term Budget Policy Statement (MTBPS) on 30 October. Then Mboweni wearing his finance minister hat, announces adjustments to February’s Budget allocations and signals policy and other changes like tax, that are announced in February 2020. And given the ANC NEC discussions, there may also be more specific policy announcements.

The mini-Budget, as it’s colloquially known, precedes by days South Africa’s second investment conference, and the country assessments by rating agency Moodys and S&P’s in early and late November respectively.

For the ANC it’s a case of playing nice until after these key moments – and until the last ANC NEC for 2019 when discussions are set to cross the t’s and dot the i’s on the economic recovery plans, also on prescribed assets and SARB nationalisation.

Wednesday’s ANC NEC statement talked of the need to restructure Eskom and to tackle “the poor financial position” of Eskom, SAA, Denel and other State-owned Entities (SOEs). And in line with “the long-standing ANC policy with respect to strategic equity partners in various state-owned companies”, such transactions would be pursued. “There is a renewed appreciation by the NEC of the roles of the private sector and labour as key partners for growth.”

It’s the kind of signal investors like. But whether words of the governing ANC turn into action remains the real test. To date, the track record isn’t covered in glory.

Eskom’s unbundling into three entities was announced in President Cyril Ramaphosa’s February 2019 State of the Nation Address, but nine months later is not any closer to being seen to be effected.

The Eskom paper that was meant to outline details beyond what February’s Budget sketched out has not yet materialised, missing its first anticipated date in late July, and the other official, and broad, deadline of September. Eskom has been described as the biggest risk to South Africa at least three finance ministers ago.

Similarly, strategic equity partners. Such talk, now styled as “long-standing ANC policy”, alongside selling off non-core government assets, goes back four finance ministers and almost a decade – with no action yet.

Instead, bailouts continue to be given to SOEs like SAA, which got some R15.7-billion since June 2017, SA Express, which received R300-million in September, Denel which got R1.8-billion in August and Eskom’s R59-billion over two years, if Parliament approves the Special Appropriation Bill.

The cost to South Africa is enormous as money is borrowed – interest repayments at R202.2-billion in 2019 are the fastest rising Budget item – or savings must be cut from programmes and delivery.

The ANC NEC economic package does not hold anything really new, nor did it provide sufficient details. It was a good PR moment. But simply saying something doesn’t make it reality. Only action does. And that’s where the governing ANC still faces its real test. DM