‘Old Nats’ come back to life in Mother City demonstrations 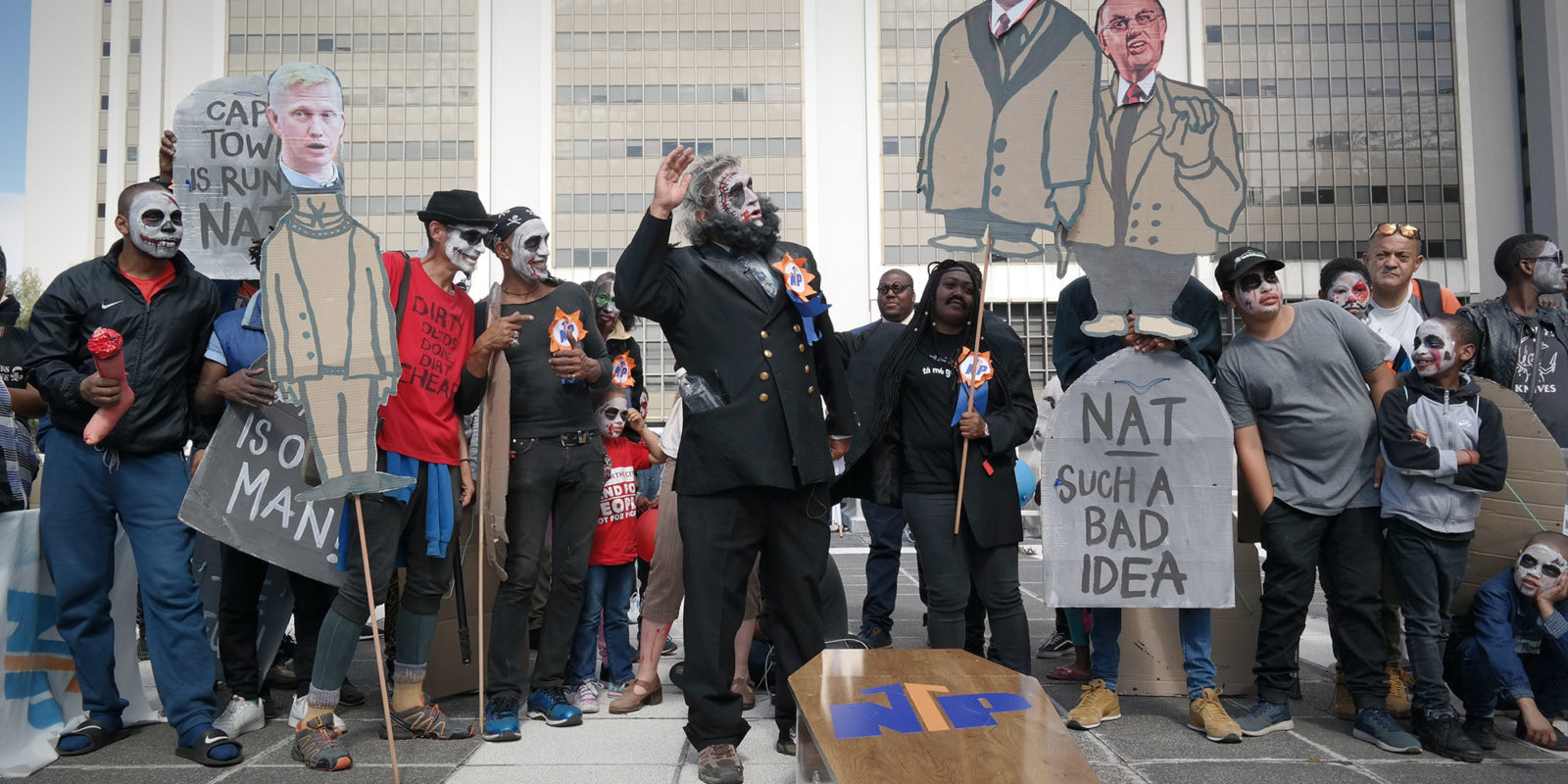 Activists from civil society organisations dressed as zombies from the National Party stand behind a coffin holding the reincarnation of PW Botha while holding pictures of City Representatives JP SMith, Ian Neilson and Mayor Dan Plato after marching to the Civic Centre on 30 September. (Photo: Tessa Knight)

‘Now is the time for us to reclaim the city for the poor,’ say activists during a colourful march in Cape Town.

Activists dressed as zombies marched through the streets of Cape Town on Monday 30 September carrying an important message: The City of Cape Town and its senior politicians are behaving like zombies from the old National Party which did not care for the black working class of Cape Town.

As the around 200-strong crowd of activists walked through the streets of Cape Town, one onlooker asked, “What’s going on here?” A “zombie” answered: “The Nats are back.”

Members of the activist organisation Reclaim the City (RTC) marched through the Cape Town CBD to the Civic Centre alongside Yes Men guerrilla activists. RTC said the march was to protest against “the continued segregation, the lack of land tenure or redistribution, the sale of public land, the injustice of relocation camps and the mass evictions that are, in fact, continuations of apartheid-era approaches to housing and urban planning”.

While marching through the CBD, activists dressed as zombies shouted “Old Nats never die” in reference to the fact that the current mayor, Dan Plato, had been a member of the National Party between 1990 and 1996.

At the Civic Centre, where the activists protested outside Plato’s office, Andy Bichlbaum from the Yes Men group, dressed as a National Party member, said the group wanted to “thank our son of the soil, mayor Dan Plato… We cleaned up District Six, our Dan is clearing up the rest.”

Bichlbaum said, “We did the bantustans, did temporary relocation areas” as someone in the crowd shouted “Blikkiesdorp”. Nkosikhona Swartbooi, head of organising at housing activist group Ndifuna Ukwazi, the sister group to RTC, explained to the crowd that the city had been governed by the National Party, who “made sure the lives of black people were difficult”.

Swartbooi said the politics and policies enforced by the DA-led city government were similar to those of the National Party.

“Now is the time for us to reclaim the city for the poor,” said Swartbooi.

The star of the march was the “resurrected” former National Party leader PW Botha.

“Botha” stated that the policies by the city were aimed “to keep the National Party alive,” and that “now the power is ours again”. Botha, who was portrayed by RTC’s Cissie Gool House chapter leader Bevil Lucas, told Daily Maverick afterwards, that “people who are in the city can’t live in the city”.

“If you have been displaced and you have been homeless, how different is that today as opposed to what the apartheid government has done? It’s our view and argument that it is in the same vein that people’s dignity has not been restored. The manner in which this current administration deals with homelessness and the displacement of people and continues to do so is reminiscent of the attitude of the old National Party.”

The City of Cape Town disputes RTC’s claims of mass evictions and displacements. When asked for comment the City referred Daily Maverick to a statement released by then acting mayoral committee member for Human Settlements, Felicity Purchase, dated 18 September:

“The City of Cape Town requests that Reclaim the City provides proof of mass removals and evictions as claimed. The City does not force mass evictions or removals as this would not be practical, among others. The City acts to prevent land invasions on its and State-owned land.

“The City dismantles unoccupied structures that are erected illegally. This is done in accordance with the law.” DM