‘Lawfare’: How courts and judges hold tyranny at bay 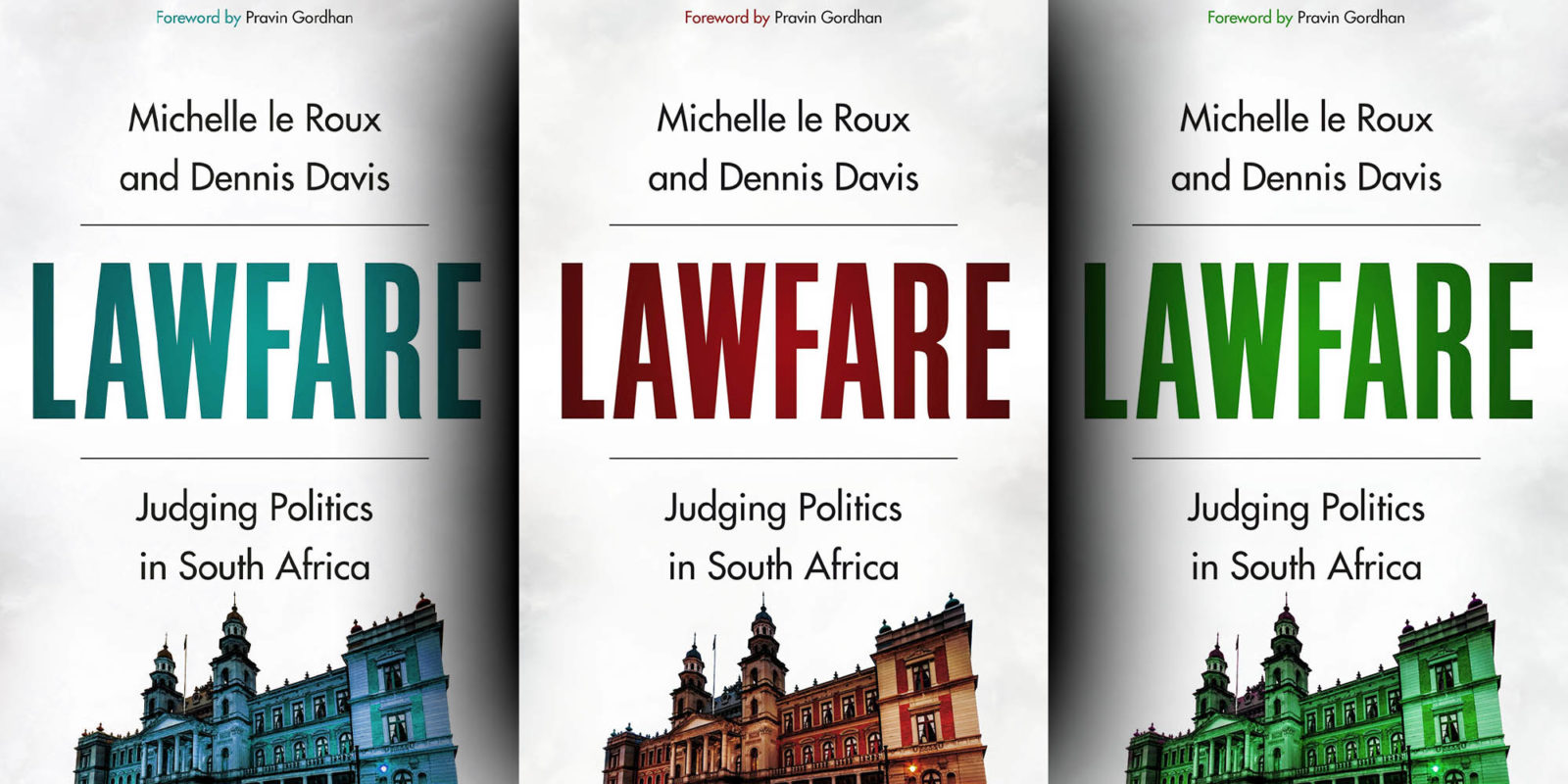 The publication of Lawfare – Judging Politics in South Africa by Michelle le Roux and Dennis Davis provides a timely discussion of the role of the law, lawyers and the courts in recent South African history.

The UK’s Supreme Court last week delivered a devastating blow to Prime Minister Boris Johnson’s attempt to prorogue (suspend) the sittings of the House of Commons for five weeks in the build-up to the Brexit deadline of 31 October. Johnson had sought to use his prerogative as Prime Minister to get Queen Elizabeth II, as head of state, to suspend the British parliament.

Lady Hale, president of the Supreme Court ruled: “The decision to advise Her Majesty to prorogue parliament was unlawful because it had the effect of frustrating or preventing the ability of parliament to carry out its constitutional functions without reasonable justification.”

The nub of the decision was that the court decided it could review the exercise of this prerogative power.

This sparked deep divisions in Britain, with even those who welcomed the decision expressing concern over the intrusion of the courts into “political matters”. Ardent Brexiteers poured scorn on the courts and lambasted the unelected judges. Queen Elizabeth herself may have muttered, “We are not amused”, after being misled by her Prime Minister and Privy Council.

This is a narrative familiar to us in South Africa, where in recent years the courts have provided a bulwark against the executive and parliamentary indifference to their constitutional and legal obligations.

The courts have been in the forefront of the fight against state capture and have come under predictable attack from the looters and their apologists for doing so. Some have gone so far as to claim, without a shred of proof, that judges have been captured and are equally responsible for state capture.

In their book, Le Roux and Davis use selected case studies from the apartheid and democratic eras to navigate the role of the legal system in adjudicating key constitutional and human rights matters. They delve into fascinating behind-the-scenes factors that underpinned these cases, revealing the characters of the litigants, lawyers and judges, and the legal strategies that shaped the law, and, in the apartheid era, alleviated the plight of the victims.

Included is an account, albeit brief, of the political events and processes that unfolded in the early 1990s that led to the democratic dispensation.

The authors pose the question: “Can our Constitution promote substantive structural change to achieve its proclaimed vision, a non-racial, non-sexist democracy based on freedom, dignity and equality for all?” In seeking to answer this they are cognisant of the limits of, as well as the dangers of an over-reliance on, legal processes to achieve political and developmental goals.

They make use of the metaphor coined by legal academic Etienne Mureinik when he posited “the Constitution as a bridge to transport a country away from a culture of authority to … a culture of justification, … where every exercise of power has to be justified by the power holder”. This is the essence of our Constitution and what it demands of those holding public office. When the latter stray, the courts will be called upon to intervene to ensure the integrity of the social compact that is our Constitution.

This book builds on the writers’ previous collaboration, Precedent & Possibility; The (Ab)use of Law in South Africa, published in 2008 before the Zuma tsunami of state capture swept over us.

They devote parts of the book to describing the destruction of institutions in the criminal justice sphere, the Scorpions, the Hawks, the National Prosecuting Authority (NPA) and, latterly, the Office of the Public Protector, and the legal challenges spawned. In the “State Capture” chapter, they list 48 cases since 2008 that have occupied lawyers and the courts in resisting Zuma-era efforts to undermine our democracy. Yes, 48 cases in 10 years … and they concede that the list is likely to be incomplete! Most of these were brought by opposition parties and civil society organisations.

From the apartheid days, they outline cases relating to detention without trial, influx control (pass laws), the Rivonia trial and the saga of the coloured votes cases – describing in the latter how the National Party changed the composition of the Appellate Court to ensure it got a judgment in its favour and which “heralded the end of legal liberalism” in the 1950s.

The apartheid system sought to cloak itself with a semblance of normality through the legal apparatus – there was a parliament, laws, and a court structure in place within a framework of institutionalised racism that was declared a crime against humanity. The book describes how lawyers, magistrates and judges colluded with this exploitative system, with patronage as its reward. Progressive lawyers, on the other hand, had to make use of creative and innovative legal strategies (at least for their times) to confound conservative judges and secure some respite from the ravages of apartheid laws.

Other cases covered include the Treatment Action Campaign case for the provision of anti-retrovirals to HIV sufferers, securing rights to gay marriage, and the Al-Bashir escapade.

The case of Alex Carmichele is perhaps an outlier in the litigation covered in the book. It nevertheless demonstrates how a determined and focused litigant can force legal change. Carmichele was viciously assaulted by a man who was out on bail for other sexual offences, including rape. She brought an action against the Minister of Police for failing to protect her and for compensation for her injuries, medical expenses and loss of income.

In a contorted legal journey spanning five courts and 13 years, she was finally awarded measly damages in the sum of R653,772. As the authors point out: “… the levels of violent crime, including incidents of sexual assault on women, remain horrifically high. While Carmichele … has radically changed the law, it also reveals the limitations of using law alone to secure redress.”

But state capture is the real backdrop for this work. The penultimate chapter is devoted to this theme, noting its impact on key institutions of state – Parliament, the NPA, the Public Protector, the Hawks, SARS and the judiciary.

The Spy Tapes and Nkandla sagas are recounted, highlighting Zuma’s noted “Stalingrad” legal strategy. This litany of cases placed judges in the front line, attracting criticism of judicial overreach, of stepping on the toes of Parliament and the executive, as well as libellous claims of political partisanship.

The authors reflect on tensions visible among Constitutional Court judges in the impeachment case (EFF2), in which Chief Justice Mogoeng Mogoeng insisted on reading out his minority, dissenting judgment, describing the majority judgment of Judge Chris Japhta as “a textbook case of judicial overreach”. This rare public altercation exposed the pressures under which judges are placed by the increasing use of “lawfare” to fight political battles.

It is not a fight of the judges’ choosing – they don’t determine the cases that come before them. But it is the failure of our political system to resolve the issues in accordance with the dictates of the Constitution that forces us to seek recourse in the courts. It is no accident that the Constitution places the ultimate authority over the Constitution in them, even though all elected officials take an oath of allegiance to that Constitution. It is in them that we repose our final trust.

This is a book that should be read by all who care for the future of our country; it tells us much about who we were, who we are and who we should aspire to become.

Le Roux and Davis caution that we cannot and should not only rely on the courts to ensure the constitutional vision is realised; we must equally ensure that our political system works, that we hold public officials to account and that we remain vigilant, active citizens upholding the values and principles of the Constitution.

Lady Hale’s ruling had some scurrying to dust off copies of philosopher John Locke’s 1689 treatise in which he wrote “where-ever law ends, tyranny begins”, a statement that underpins the modern-day principle of the rule of law. We chose to become a constitutional democracy under the rule of law, and it is the courts who will be the ultimate arbiters of the law. DM