Fish & chips at The Test Kitchen, and gin that changes hue 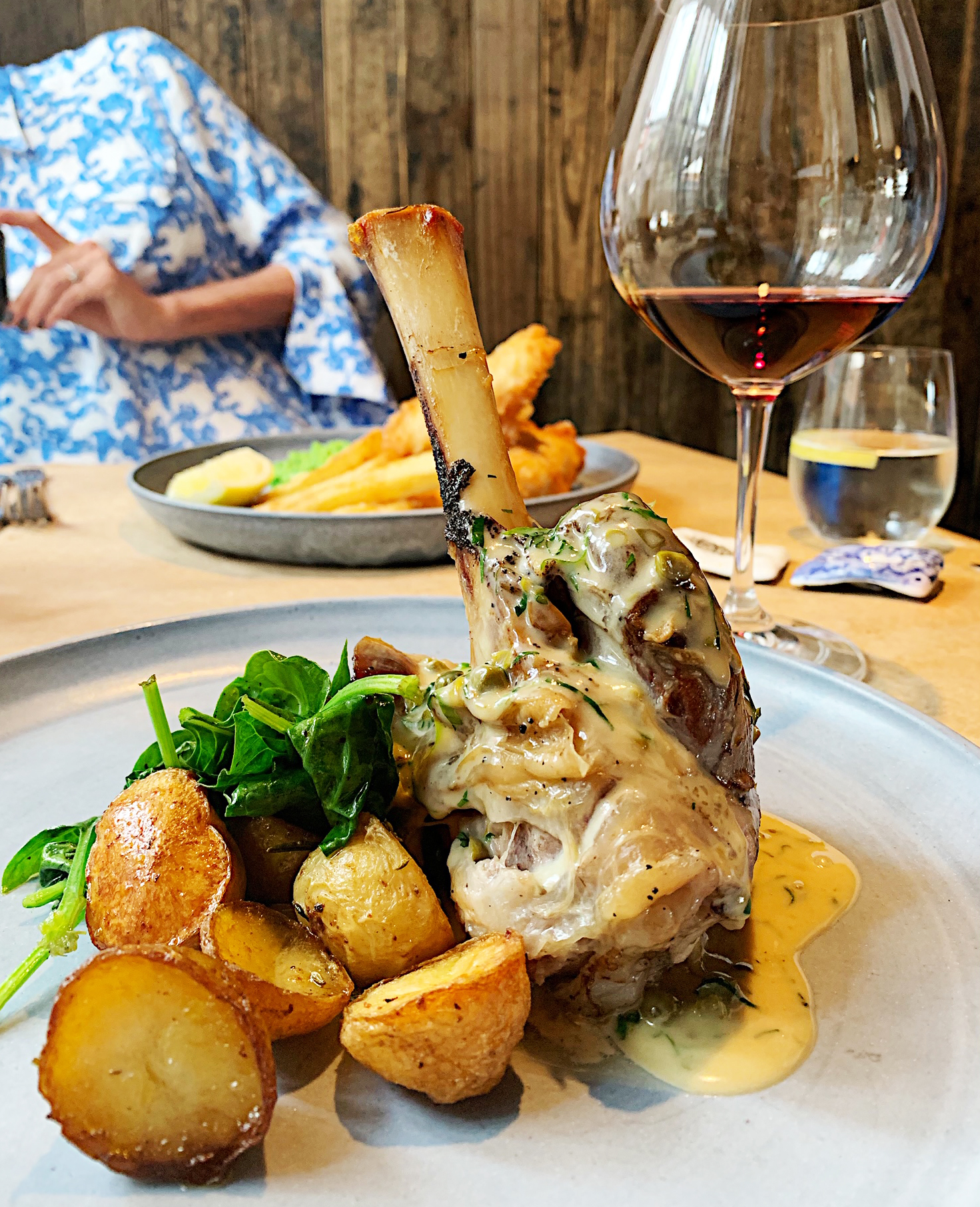 Rum-soaked cake and no-guilt bakes, The Test Kitchen as you’ve never seen it before, and colour-changing gin: these are their stories.

The Test Kitchen does a pub pop-up

Think pub lunch and what’s the first dish that comes to mind? If you didn’t answer “fish and chips” then it’s to the back of the classroom with you. All right, bangers and mash might let you squeak through, but only just.

Fish and chips is ubiquitous pub fare and its history is firmly rooted in Britain. According to a Brief History of Fish and Chips, “Charles Dickens refers to an early fish shop or ‘fried fish warehouse’ in Oliver Twist (1839) where the fish generally came with other carbohydrates – sometimes bread or baked potatoes but there was no sign of the golden battered fare yet…”

As for putting the classic combo together, some say it was northern businessman John Lees who did it first: “As early as 1863, it is believed he was selling fish and chips out of a wooden hut at Mossley market in industrial Lancashire. Others claim the first combined fish ‘n’ chip shop was opened by a Jewish immigrant, Joseph Malin in East London around 1860.”

Whoever you believe, the meal went on to become one of the most popular in the world. Surely not too bold a claim? I mean, in The Road to Wigan Pier (1937), George Orwell put fish and chips first among the home comforts that helped keep the masses happy and “averted revolution”. During World War II, ministers bent over backwards to make sure fish and chips were one of the few foods that were never rationed.

Also from the UK is chef and restaurateur Luke Dale Roberts. His first and most famous restaurant is The Test Kitchen, which is taking on a new identity at lunchtimes, three days a week. Ye Olde Test Kitchen is a pub pop-up running until October 21 ((TBC)).

Every Wednesday, Thursday and Friday, bunting is draped across the ceiling and a menu of pub classics – in The Test Kitchen style – gives patrons the chance to have the Dale Roberts experience at a fraction of the cost.

There isn’t a foam or a gel in sight, and the chefs have put away their tweezers for the time being. Portions are hearty, and the food is comforting. This is a more casual TTK in jeans and a T-shirt, but you’re never going to forget where you are. “This is not The Test Kitchen in terms of multi-course, multi-sensory experience, but we are offering the same degree of skill and attention to detail to good, old-fashioned, honest food,” says Dale Roberts.

The service remains at the highest level with sommelier Tinashe Nyamudoka on hand to pour your wine, and I’m willing to put good money on there never being an amuse bouche at the Red Cock & Ball Inn. This delicious little morsel contained truffle panna cotta and langoustine with a sharp stab of zesty lemon and other things I can’t remember now, but I do know we inhaled it then licked the bowl.

The menu has four starters, six main courses, and four desserts. With a pop-up that’s only there for a few hours before being broken down and re-set as one of Cape Town’s top dining establishments in the evening, things have to be simple. Mussels in cider cream are available as a main course or a starter, and that’s what my friend had. I chose rabbit and pork jowl rillette with caper berries and chorizo.

I loved my slow-cooked lamb shank with anchovy mustardy sauce; the meat fell off the bone. The fish and chips were a no-brainer. Again, a big portion (two pieces of fish), with tartare sauce and pea “emulsion”. Maybe South Africa isn’t ready to hear “mushy peas” or maybe it’s a Test Kitchen thing. Either way, it was a most pleasing dish, both in appearance and taste.

Desserts include a crumble of the day, Eton mess, a cheeseboard and…sticky toffee pudding. A lot of the time, this is a general description for something soft and sweet, but in this case, it truly tasted like toffee and was ridiculously good.

The theme of complementary combinations continues this month at Truth Coffee (voted as the world’s best coffee shop by British newspaper the Daily Telegraph), where they’ve teamed up with Richland Rum (Richland Rum Cask Strength was voted best sipping rum by bourbon judge and writer Fred Minnick in Forbes magazine) to create a delicious and incredibly rich rum-based drink and dessert.

Hot French chef Kamal Hamzaoui (no idle flattery; he’s a model) has lived and worked in Cape Town for the past 16 years, and previously worked in Michelin star restaurants in Europe. His pastries are legendary and exquisite, glossy and uniformly perfect, his croissants flaky and buttery. Until October 31, you can order his Rum Baba Rum – a small yeast cake saturated in syrup and soaked with enough rum to make your eyes water, covered with banana cremaux, encased in dark chocolate.

“Coffee and rum are a natural combination, both strong and flavoursome, which play off the other’s richness,” says Truth owner David Donde.

Unfortunately, the jeans disagree with a daily cake and sugar intake so, more recently, I headed off to Guiltless Protein Bakery on Main Road in Sea Point. Here you can scoff all the bakes which are high in protein, gluten-free, low in carbs, and have no added sugars or preservatives. The nutritional breakdown is listed for each item, so you know exactly what you’re getting.

Having (more or less) followed a low-carb low-sugar lifestyle for quite some time, in the company of a person who is gluten-intolerant, I know it’s actually quite easy to accommodate these dietary requirements when it comes to baking. It’s nice, though, to find a place that has such goodies ready-made, and many last well in the fridge as well as being suitable for freezing.

Hot drinks, smoothies and breakfast are available at the light and airy café, but we were there for the sweet stuff. I left with a box containing a slice of banana bread, two cupcakes, two brownies, four protein bon bons and a protein bar. For two people, okay?

Well, that was the intention. Maybe it didn’t turn out that way. I’m saying nothing more on that matter.

My verdict: I loved everything except the protein bar. Not that it didn’t taste good; it was chewy and sticky and not easy to eat. The cupcakes were light, and the cream cheese icing just right. The bon bons were surprisingly filling, a good little appetite-satisfier with morning coffee. The brownies did well with strawberries and whipped cream, and the banana bread warmed up and slathered with butter was the thing I never knew I needed so badly.

I Got the Blue Gin Blues

A blue gin that turns pink when you add tonic? What fresh sorcery is this? Despite being told this up front, and seeing it with our own eyes, my friend and I still had to make a short video with the second glass to prove it.

Prohibition Blue Gin joins its mates from Silver Creek Distillery, the pink and the clear. In a universe already overflowing with craft gins, these have stood out for me. I don’t know how better to explain it than the pink one tastes, well, pink; differently pink from all the others, and jolly nice. Pink is my favourite colour, and with pink tonic, it’s a winner.

I was a bit sceptical about the new one. Blue drinks have a murky history for me, and have never led to anything good. The last one was a giant fish bowl on a long-ago birthday and I did not wake up where I should have.

Also, blue is not a colour which occurs naturally very often in food, which is generally a warning sign. Apparently here they’re using the flower of the Blue Pea here, and I really don’t need to know any more than that. The drink turns a pretty shade of delicate pink with the addition of tonic or lemon, and its notes are citrus and floral. Like proper absinthe which uses wormwood, the Blue Gin will also fade over time (if you keep it that long) so it needs to live in a cool, dark place.