HERITAGE ON A PLATE 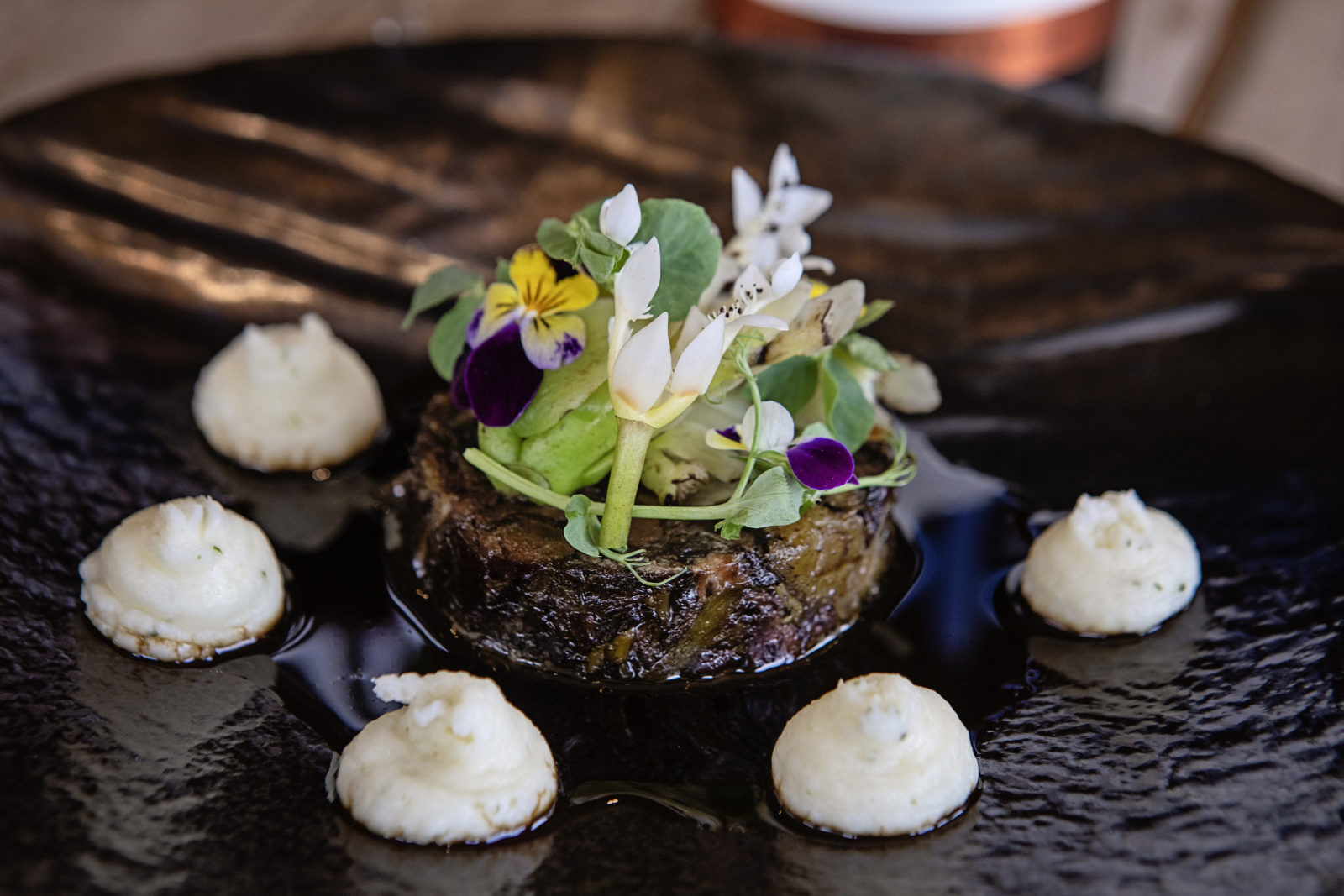 An impromptu meal at Creation wines was a sensory experience that was as inventive and creative as it was relaxed and unpretentious.

When we were last at Creation wines, it was over a decade ago and it was a fledgling little winery on the ridge of the Hemel en Aarde valley, there was building rubble everywhere and the tasting room had only just been completed. (They were literally sweeping up the last of the builders’ dust as we walked in.) Co-owner Carolyn Martin welcomed us in the deflated and apologetic manner of one who has just seen off the last builder after months of banging, clanging and bashing.

We were about the only ones there and the only offering to tempt the palate, apart from their new wines, was a good but rather meagre and unimaginative cheese and charcuterie board and a lovely view.

When we paid them a visit on Monday, 11 years later, we were all a bit more mature and rounded and, unlike with me, the years have certainly been kind to the little spot of heaven that is Creation.

As we were there, ostensibly on a business-related matter, we were welcomed by the ever amiable and laidback Phillip Marais, the GM. Evidently Carolyn and her hubby/winemaker JC were off in Europe collecting yet another award or some such.

As one does when businessing in the Winelands, we sat down to chat and were offered a sip of wine by the affable Phillip and, as it was our last quick appointment for the day, and not to seem rude, we took him up on the offer. As one does.

That was around 1pm.

Just before closing time at around 5pm we departed. Elated, satiated and a little awestruck.

Let me fill you in on what you missed out on during those fabulous and unexpected four hours.

While sipping on a crisp and deliciously refreshing little white, Phillip suggested, casually, that we snack on something as we chat. (It was lunchtime after all.) Expecting a cheese board, I happily left it to him to arrange and the mention of the new Heritage menu did little to pique my interest too much beyond the hope of a tasty treat or two, washed down by a glass or so of the good stuff.

Well…! What followed was a sensory experience that was as delicious, inventive and creative as it was relaxed and unpretentious.

The basic and underlying ethos of their new “Heritage Story” menu was explained by Phillip.

“With September being Heritage Month in South Africa, the choice of the theme was kind of natural. But whose heritage were we going to celebrate? Jean-Claude, the winemaker, hails from Switzerland and Carolyn’s roots are South African, their two children were born in Switzerland too, so the cultural differences are as vast as they are wonderful.”

The wines drive the menu, so each course, or Chapter in the story, is created around one or more pairing wines, which has resulted in a magnificent fusion of cultures and backgrounds.

“We try to create dishes representing the favourites of days gone by to modern cuisine, capturing the latest culinary trends; the Heritage Story strings together a wealth of nostalgic tastes and flavours with an even greater dollop of innovation and creativity,” explained Phillip.

And so, into the breach we trundled. The “Heritage Story of Creation” menu comprises six courses with eight wines and you don’t want to rush it. The attention to detail is exceptional, from the exquisite plating and crockery to the ever-changing Riedel crystalware and sensory accompaniments, like seashells to put to your ear and coarse salt to sniff. There is lots to describe, so I found myself fishing through their website after the fact to make sure I had the details correct.

We had the lovely Bianca Drury attending to our every need and, for a young woman who has only been two weeks on the job, she was informative and precise, while only there when you needed her and always with a winning smile.

The first chapter starts with a bang, which includes freshly baked Zopf, which is a traditional Swiss treat but now in a delectable South African guise: Zopf Vetkoek served with old-fashioned “Suurvytjie” jam and butter, sprinkled with biltong shavings. Paired with the vivaciously crisp and fruity Creation Grenache Noir/Viognier blend. It is a creamy sweet, sour and savoury sensation and a really clever expression of crosscultural inventiveness.

Chapter 2, served in a seashell, is indigenous Cape Abalone served with capers, red onion, lemon, spring onion, garlic, kelp and samphire. Pairing with the Creation Sauvignon Blanc/ Semillon blend, the saltiness of the dish brings out the sweetness in the wine, opposites attract … and the minerality is uplifted and pronounced – Mooi, Man! My absolute favourite. My significant other, Rose, as she is allergic to anything that clings to a rock, opted for the vegetarian version of the dish which substitutes the abalone with oyster mushrooms. She declared it a triumph.

Chapter 3 was a delicately poached, in coconut milk, linefish, banana leaf and apricot masala salsa. Combined with the single-vineyard Creation Reserve Chardonnay it is nothing less than an inspiration for the senses. It’s a celebration of Cape Malay culinary heritage, and the aromatic masala salsa is a delightful foil for the vibrant and elegant wine bouquet. The creamy texture complements the buttery nuances in the wine while the coconut and apricot bring out the toastiness in the Chardonnay. It is an intense yet at the same time light dish: a chic, modern crown for a sublime Chardonnay.

Chapter 4 featured lamb loin, star anise-poached pear, polenta, goat’s milk cheese, Parmesan and sorrel – ably assisted by the Creation Reserve Pinot Noir through contrast as well as similarity. Now it’s always risky offering lamb to a Karooster, as we do know our stuff in that department, but the savoury lamb was beautifully counterweighted by the layers of dried fruit in the wine. The goat’s milk cheese polenta, on the other hand, supported the crisp acidity in the wine, while the star anise was in harmony with the piquant spiciness of the wine. “A dish of earthy complexity,” remarked Phillip. Yes indeed.

Chapter 5 again, tempts the inner Karooster and Kapie in all of us with a sampling of shredded springbok shank with waterblommetjies, samp purée and jus – pure South African heritage and paired with the Creation Syrah/ Grenache blend. (See main image.) This was a dish rich in umami, with the waterblommetjies adding freshness as well as texture. The samp contributed creaminess and combined brilliantly with the soft tannins of the wine.

And finally, Chapter 6: What would a visit to the Cape be without the much-loved Malva poeding but this time a vegetarian interpretation with apricot, orange, popcorn crumb and a yoghurt-based custard. Here you have one of the most popular winter desserts in South Africa paired with the versatile Creation Viognier. The gooey malva and creamy yoghurt textures flattered the smoothness of the wine. The stone-fruit in the Viognier sang beautifully with the fruit in the dessert, lifting both sweet and sour notes. The nuttiness of the popcorn added texture and dimension … with a cheeky little daisy contributing a touch of spring. This adaptation, though creative, fell a little flat with the traditionalist in me. Too much PC and not enough butter and cream, I say.

At R695 pp for the Heritage menu, this was money and time well spent. The creativity and flair shown by the chefs and the unbelievable attention to detail with even the tiniest of things, and the sublimely paired wines, was a joy and reflected just how far Creation has come in its journey from building rubble to one of the finest dining experiences in South Africa today.

A classic example of understatement meeting creativity and passion. Their kitchen deserves more accolades and a visit from you. Really. DM