Trump to Zelensky on Ukraine: Nice country you have there, it would be a shame if something happened to it 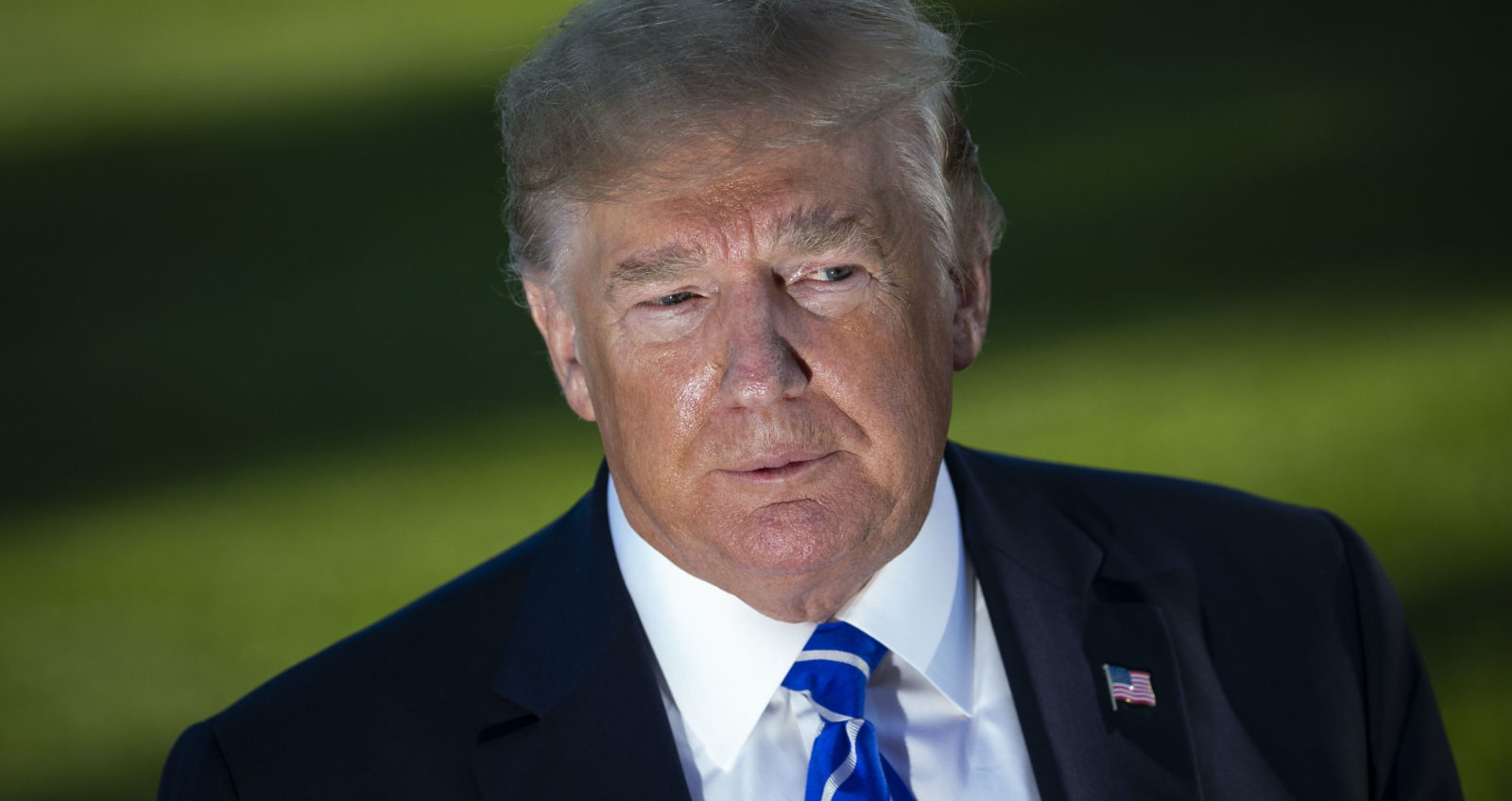 A transcription of a problematic phone call between US President Donald Trump and his Ukrainian counterpart has triggered an impeachment process in the American legislature. Things are about to get very dangerous – but for whom?

Even more obsessively concerned with events in Washington than I am, an old friend who now lives in that city wrote to describe the just-released summary transcript of a conversation between US President Donald Trump and Volodymyr Zelensky after the latter had become president of Ukraine.

It is the only story in Washington this week.

The storm arose when it became clear a whistleblower within the intelligence cadre in the US government was so worried about what he or she learned about the call that he or she expressed concerns in writing – as a formal whistleblowing document given to the inspector-general of the intelligence community. The document should also have gone to the relevant congressional committees, but has, so far, been held back by the Trump administration’s Justice Department.

As our friend wrote after reading the transcript summary, “So Zelensky opens by shamelessly sucking up to Trump. Trump responds by badmouthing Angela Merkel. Trump then gets down to business. He wants Ukraine to gather dirt on Biden. Zelensky wholeheartedly agrees. He’ll help with anything Trump wants. Zelensky then starts delivering talking points on oil, a one-on-one meeting with Trump, and so on. Trump obviously doesn’t give a damn about this stuff and ends the conversation.” Boom.

Okay, there was no explicit quid pro quo, as in, give me Joe Biden’s head on a silver platter and I’ll release the pending military aid for Ukraine’s hard-pressed military in dealing with Russian-supported rebels in its easternmost provinces. But the clear verbal “wink-wink, nudge-nudge” of this is pretty clear.

Would-be mafia dons know exactly what they mean when they say, like Trump did, “I would like you to do me a favour”, although mob bosses are generally more subtle than that because they worry someone who works for law enforcement will find out, put two and two together and get the right answer. In fact, the whole premise of this Trumpian shell game, that then-vice president Joe Biden had worked to get rid of a Ukrainian prosecutor to protect his son, who was then on the board of a Ukrainian natural gas company, is vapour.

In fact, the then-vice president, together with leaders from various other Western nations, had worked with Ukrainians to get rid of a famously corrupt prosecutor and to replace him with a much cleaner one. No evidence of Biden or his son being involved in any corruption in Ukraine has ever been offered. By anyone. Except for some wild statements from Trump that millions of crooked dollars were at play.

(Full text of the summary transcript can be seen here. )

Democratic Congressman Adam Schiff, chair of the House Intelligence Committee, described this mess in a mid-afternoon media conference on Wednesday 25 September and made no bones about saying the whole thing had the hallmarks of a mafia shakedown led by the US president. Soon enough, the so-far-unrevealed whistleblower will testify before the US Congress and congressional (and public) demand will almost certainly also force the hand of the administration to provide Congress with a version of the whistleblower’s actual memorandum as well. And that, presumably, will toss more combustible material onto an already smouldering fire.

The fire had, in fact, been lit on Tuesday when Speaker of the House of Representatives Nancy Pelosi announced she had finally authorised the formal opening of a presidential impeachment inquiry, after months of foot-dragging to keep her entire party’s delegation facing the same direction on this inquiry.

This will presumably lead to a consolidation of a series of individual committee inquiries, with the lead being taken by either the judiciary committee or by an ad hoc select committee specially set up for the purpose. Realistically, the House will have to move quickly to reach agreement on the charges called “articles of impeachment”.

A simple majority of the House of Representatives impeaches a president and, given a Democratic majority there, this seems attainable. But the Senate then holds the actual trial, where a two-thirds vote is needed to convict. Given the Republican hold on the majority there, it will be a big hill to climb – unless the evidence that develops is so clear, compelling and obvious that it is impossible for even Republican stalwarts to blindly join the flock of sheep resisting a conviction of Trump.

There will be days of analysis of the summary transcript, the whistleblower, and what he or she knew and was horrified by, the whole web of constantly changing explanations by the president of what went down, and how this may even have had connections to the still-murky behaviour of the Russians in the 2016 election. There will be testimony and debate, but at least, on this first day, here are what seem the key takeaways.

First, of course, is that there was no explicit quid pro quo. It was always far-fetched there would be such a thing in writing, but Trump does suggestively mention the US is being “very, very good to Ukraine”, albeit without straight-out speaking about the then-still-withheld military aid. But Zelensky is desperate for the aid and, by all accounts, is no fool and can do the math. Trump suggests Ukraine hadn’t been living up to its end of the bargain. Or, as Trump says, “The United States has been very, very good to Ukraine. I wouldn’t say that it’s reciprocal necessarily because things are happening that are not good, but the United States has been very, very good to Ukraine.” This sounds like an out-take from The Godfather and Carmine Coppola’s music should be playing here.

Then Trump launches into asking for investigations. As Aaron Blake reported in Tuesday’s Washington Post “After Zelensky responds, Trump’s very next comments deal with investigations he’d like to see. The first involves the Russia investigation by Robert S Mueller III and CrowdStrike, a US-based internet security company that initially analyzed the breach of the Democratic National Committee’s servers in 2016 and pointed to two hacker groups believed to be linked to Russia. ‘I would like you to do us a favour, though, because our country has been through a lot and Ukraine knows a lot about it,’ Trump said, in reference to those investigations. ‘Whatever you can do, it’s very important that you do it if that’s possible,’ Trump says of CrowdStrike.

“Trump soon adds: ‘The other thing: There’s a lot of talk about Biden’s son, that Biden stopped the prosecution, and a lot of people want to find out about that so whatever you can so with the Attorney General would be great… It sounds horrible to me.’” Even without the explicit quid pro quo, as Blake continues, “Consider where we are. Trump asked for what amounts to foreign assistance for his 2020 re-election campaign. (His personal attorney Rudolph Giuliani had been pushing for this by publicly noting it would be helpful to his client. So, there’s really no disputing that.)”

You can bend yourself into a pretzel trying to see how Zelensky could interpret all this as anything besides a strong suggestion, and even a veiled threat. Think about how it plays when your boss repeatedly alludes to something you should do; something, as Blake says, “while noting what your compensation is – without explicitly making a demand. What are you going to do: believe it to just be a gentle suggestion? No, you’re going to think there could be some relation between your pocketbook/job status and your future actions.” Or, if your boss is a Mafia don, of course, your continued existence.

And, as Michael Cohen, Trump’s former attorney and bag man, explained in his own earlier testimony when Trump speaks about something unsavoury he “doesn’t give orders; he speaks in code. And I understand that code.” This conversation, of course, is still just one part of a larger picture.

The whistleblower complaint involves multiple events, rather than just one communication, precisely as the intelligence community’s inspector general Michael Atkinson had already testified last week. It is not yet clear what other events could have taken place – and their meaning and importance. It’s worth noting that Zelensky is the first one to bring up corruption, even as Trump seems to be praising the already-ousted, corrupt prosecutor, Viktor Shokin, who was bounced out in 2016 thanks to the efforts of then-vice president Biden and other Western leaders.

Blake explains: “The Trump team has argued that this was corrupt because Shokin at one point had been investigating a Ukrainian energy company, Burisma Holdings, that employed Biden’s son, Hunter Biden. (US and Ukrainian officials have said that investigation was dormant when Biden helped force Shokin out.)

“But despite that prosecutor being widely criticised both inside Ukraine and elsewhere for being soft on corruption, Trump actually seems to side with him. ‘Good because I heard you had a prosecutor who was very good and he was shut down and that’s really unfair,’ Trump says. ‘A lot of people are talking about that, the way they shut your very good prosecutor down and you had some very bad people involved.’”

This investigation now formally has legs, with an officially declared impeachment inquiry. The further question is whether the case for impeachment can be made persuasively; and, if so, what will the Senate do with a House of Representatives vote in favour of that outcome. The effect of all this on next year’s general election remains the biggest question of all. DM