Restoring a broken body, one precision scalpel pass at a time 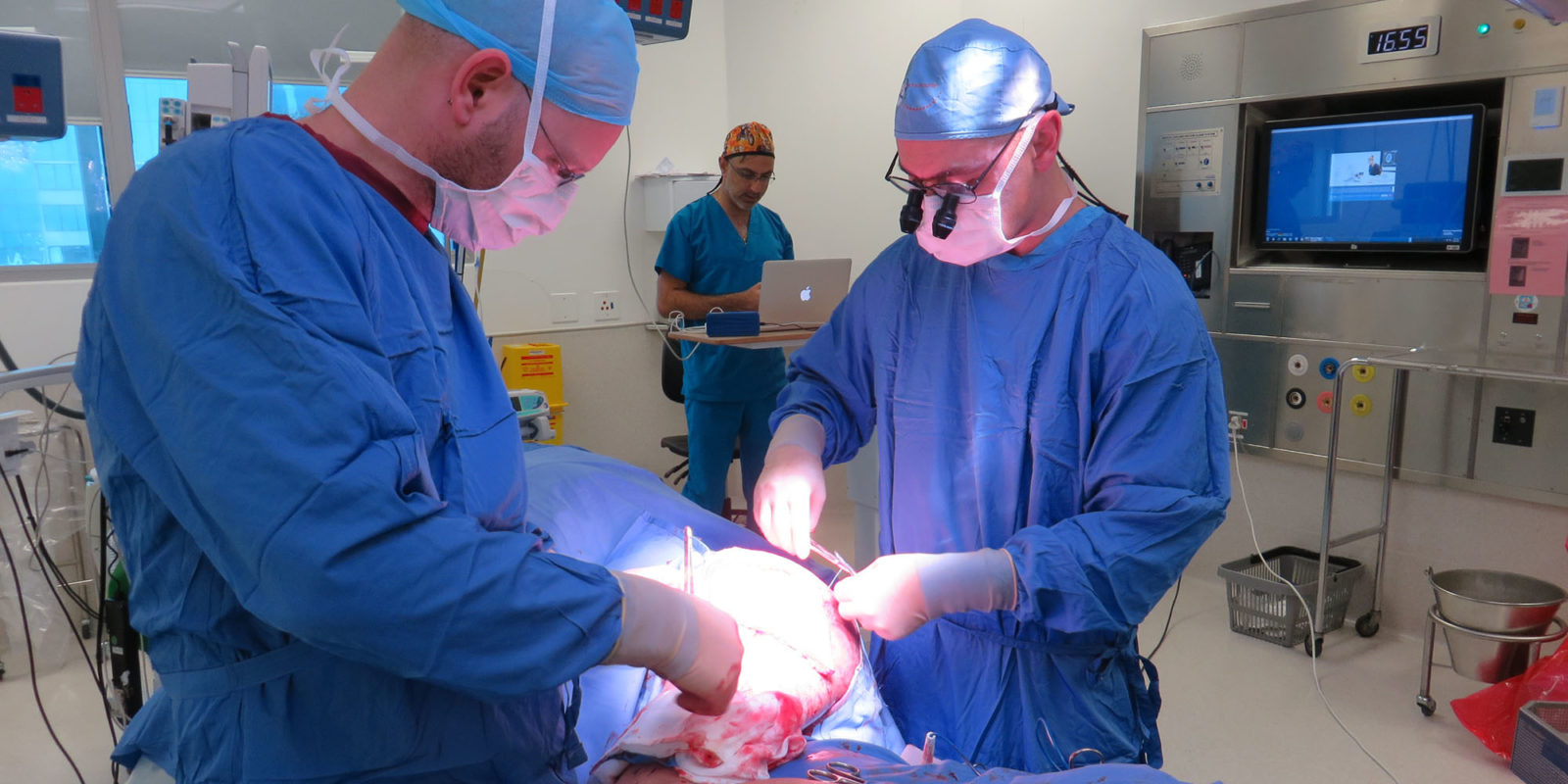 Plastic and reconstructive surgeons Dr Alex Landau, left, and Dr Nick Kairinos raise a skin and tissue flap to cover a huge bedsore on the side of a patient’s thigh during an operation at the Netcare Christiaan Barnard Hospital in Cape Town. (Photo: Elsabé Brits)

The man lying on the operating table has a bedsore much larger than my hand. It is slowly draining the life from him. Today this wound which has been ravaging his body for years will be treated by two plastic surgeons.

Years ago the 74-year-old patient was paralysed due to cancer of the spine. He was cured, but his muscles wasted away. Unable to move, the bedsore (pressure ulcer) became an open wound.

When Kairinos started treating the man in July he had three bedsores: one on the lower back, one on the right side of the upper leg, below the hip and one on the exact opposite side. “He was at death’s door due to malnutrition.”

Not because he did not eat, but because his body was trying so hard to heal itself all resources were sent to the affected areas. Slowly sapping his life away.

He had to be fed through a tube directly into his stomach to prepare him for surgery. The one bedsore on the right side has already healed, due to the same procedure that will be repeated today, on the left side. Kairinos says bedsores should not develop, they are due to poor care.

The procedure starts at 3.30pm in Theatre 8 when Dr Aneet Kessow, anaesthesiologist, administers the anaesthetics. “It is a lot like being a pilot. I control the take-off, the journey and the landing. But if you have an old plane the job is a lot more difficult.”

Placing your life in the hands of an anaesthesiologist “when you are at your most vulnerable, is huge”. He has meted out all dosages carefully before the time. Drugs he will need in an emergency are ready for use, only a second away.

There is an immediate drop in blood pressure, but Kessow expected it from this particular patient. He has the medication ready and injects the drug. The team starts to disinfect the body area on which they will operate, then cover the rest with sterile blue covers. Only the huge bedsore, about 10cm by 15cm, and the surrounding skin is now visible.

It looks like a deep, angry pit, even under the bright theatre lights.

Landau injects local anaesthetics into the skin surrounding the wound, they constrict the blood vessels to control bleeding. This is one of the many techniques to minimise bleeding. Kairinos has a very specific way of treating either infected wounds, or bedsores: He creates a new wound, cutting away the old one. “I treat it like a cancer. I get rid of it and create a fresh, new and normal wound.”

He uses an instrument called a Versajet (a hydro-scalpel) which shaves extremely thin layers of tissue off the wound, with a super-fast, thin jet of water: “The jet of water travels so fast it creates a little vacuum, thus bacteria does not fall back on to the wound. It also allows me to shave off just enough tissue so I don’t cut too much off.” This would not be possible with an ordinary scalpel – too much tissue would be lost and the bacteria would fall back into the wound.

Kairinos carefully steers the Versajet, which looks a bit like a large pen with a thin point, over the bedsore. A tiny jet of water is visible. It looks easy. “All surgery is, is applied anatomy. If you don’t know anatomy, you can’t do it,” says Landau. “It should always look easy, if it doesn’t you don’t know what you are doing.”

By the time most patients get to this stage in their treatment, all of them have multi-resistant bacteria: the enemy of the antibiotic war.

“In 95% of the cases I see, the patients should not have had antibiotics in the first place. Doctors take a swab of the wound, have it tested, they see bacteria and prescribe antibiotics. But, there is no infection. The bacteria are just on the surface of the wound. One should only give antibiotics if the surrounding tissue is infected,” says Kairinos.

He only prescribes antibiotics if the bone or surrounding tissue is infected, or if there is another infection such as in the bladder.

Enough of the old wound has been carefully shaved away. The next step is to remove some of the skin around the wound with an electric scalpel. This needle-like, delicate instrument cuts easily through tissue with a tiny electric arc at the point. It also seals the small blood vessels, preventing bleeding. One can see small puffs of smoke as Kairinos cauterises the skin. The smell is, well, something to get used to. Or not.

The new wound has been carefully created.

The devil, which is largely responsible for the bedsore, is bone (the greater trochanter of the femur) opposite the head of the thigh bone (femur). It is a bony protrusion which often worsens bedsores when you constantly lie on your side. It protrudes too much for the skin and tissue flap to cover the new wound, and even if it did, it would just create a new bedsore. This bone creates pressure on the skin when lying on your side.

At 4.30pm Kairinos starts to chop away a large part of the bone with orthopaedic instruments. He removes a piece of bone. The “slice” he removes is about the same as the cross-section one would cut through a large lemon, for a drink. Round and about 1.5cm thick.

Blood bubbles like tiny fountains from where the bone was removed.

Kairinos heads a wound care clinic at the hospital and has changed the way in which wounds are treated. Putting a fancy, expensive dressing on does not work. An interdisciplinary team reviews cases once a month and then give their treatment input.

Bedsores, which develop due to pressure against the skin which limits blood flow, are 20% of what they do. The rest are sores due to diabetes which is an increasing problem. “There are numerous reasons people with diabetes develop sores which don’t heal, but it affects the blood flow, collagen and nerves.”

With obesity, the flow in small blood vessels is compromised, which is a critical problem and wounds struggle to heal. “These are all growing problems.” Some patients have to stay in hospital for up to five months before they can go home.

“I recently had a patient who had 12 operations after an initial hernia operation because her wound would not heal. It was due to obesity because the blood flow is compromised as it struggles to reach the wound,” he says.

Kessow gives the patient more fluids. “It is not about keeping you alive, but we extend the care for the next two to three days, to ensure better recovery and we manage pain,” he says. He orders blood. The patient might need it later on.

Both Kairinos and Landau stop various little bleeds. The piece of bone, red and porous lies in the stainless steel bowl. It ends up in the red, medical waste bin along with all the other blood-soaked items.

Sterile surgical bone wax (made from beeswax and isopropyl palmitate, a wax-softening agent) is placed on the exposed, bleeding bone to stem the bleeding. It looks soft and pliable. Like a plug, covering the bone. The fascinating power of the bee is endless. Even here during an operation we depend on them. Next, the surgeons sprays a white powder, made of a plant-based cellulose on the entire wound. It helps with clotting, which also reduces the bleeding.

At 4.45pm the two start covering the wound with the tissue and skin flap. “One can’t just cut the skin and tissue off, and attach it here (on the wound), because it would die. It is alive, with blood flow. It needs to be raised and repositioned,” says Kairinos.

They work like expert seamstresses. Stitching using both hands at the same time. In and out. Making loops. Again and again. The initial incision is also closed. The flap is bleeding, which is a good sign. It is alive.

The triangular skin and tissue flap covers the oval wound. But there is a little piece, also a small triangle at the bottom of the wound, which is not covered. Luckily there is a similar piece left. This is a bit like building a puzzle.

They discuss what to do. They will use the little piece of “leftover skin” as a graft for the small part of the wound which is not covered by the flap. Kairinos grafts the little triangle and hands it to Landau who uses tiny stitches to attach it to the wound. There is a tiny bit of muscle left for the graft to grow on. The stitches are done extremely carefully and many are placed to ensure the wound closes properly. They work in unison. Hardly speaking.

Hours before there had been a gaping, rather deep hole. Now it’s covered by the patient’s own skin and tissue. It looks terrific. Because the patient is high risk, due to his paralysis, they use a vacuum pack dressing to cover their work. Kairinos explains it is to support the tiny skin graft and give it time to develop a blood supply.

Due to the development of multi-resistant bacteria this is the last patient on the list for this particular theatre today. Afterwards, the whole theatre has to be disinfected (fogged) and will be closed for 24 hours to prevent cross-contamination to the 11 other theatres at Netcare Christiaan Barnard Hospital.

Just before 6pm they walk out of the theatre. The patient may not be able to feel the extreme discomfort and pain of the bedsores, but his quality of life will improve by leaps and bounds. A new beginning.

“When I looked at him earlier today I noticed his cheeks were actually a bit fat. He talked to me instead of just answering yes and no, like before. This makes it all worth it,” says Kairinos. DM