Cape Town’s rivers are open streams of sewage, yet the City is not spending its budget 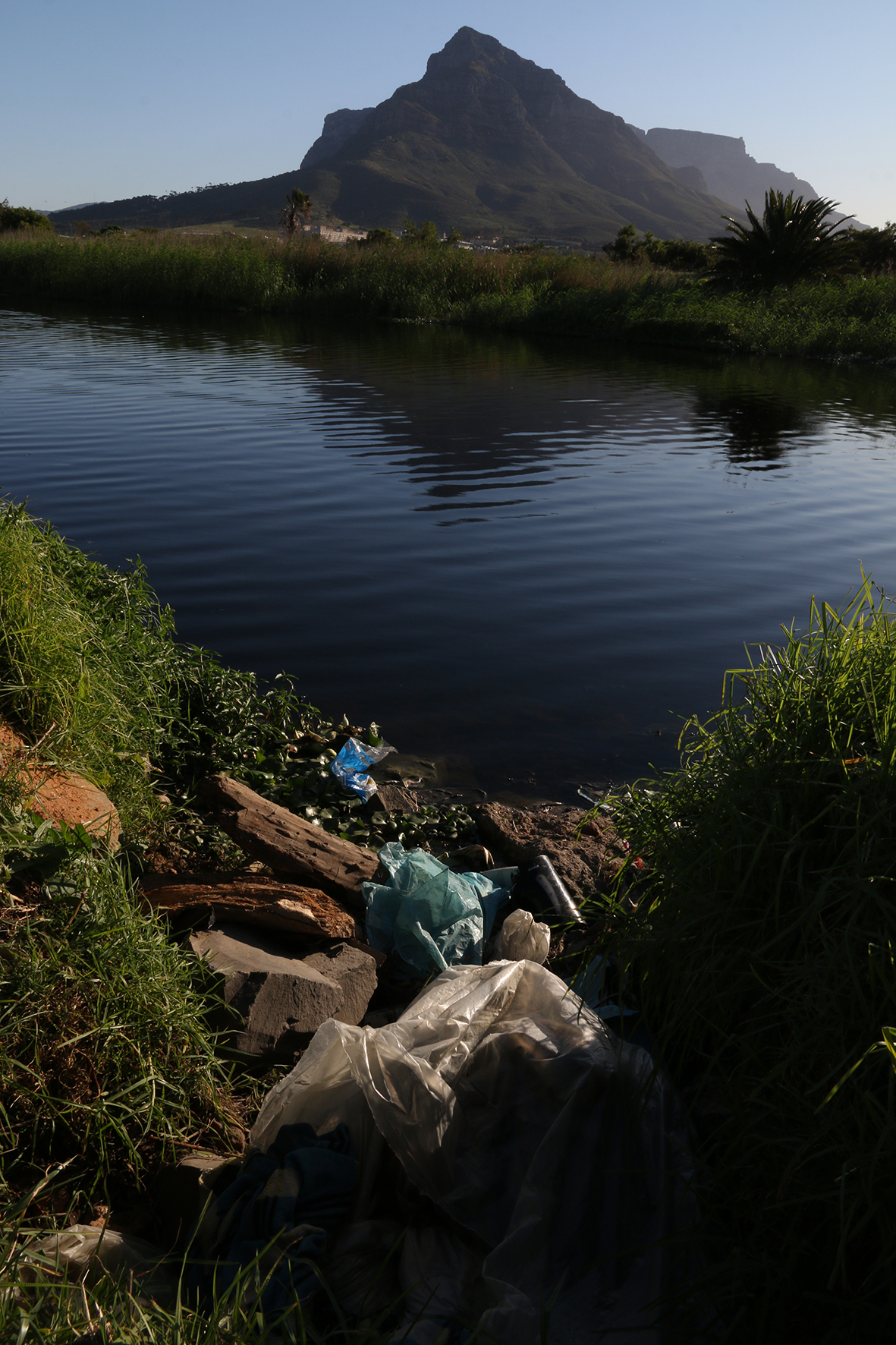 Plastic and other rubbish is strewn along the banks of the Black River, one of the most polluted rivers in the city. Photo: Steve Kretzmann

Water in the Black River is as dirty as untreated sewage.

Some of Cape Town’s rivers and canals are so polluted they are essentially open streams of sewage, and although the City of Cape Town is aware of this, the water and waste directorate has vastly underspent its budget for the past two financial years.

Participants in the annual Peninsula Paddle, an event organised by scientists and environmentalists to paddle the interlinked waterways from Muizenberg to Paarden Eiland, were taken aback by the state of the rivers when they kayaked on 8 September.

The plastic waste was the worst they had seen in ten years of the event, said Dr Kevin Winter of UCT’s Future Water Institute, who helps coordinate the Peninsula Paddle.

The worst affected waterways were the Steenberg Canal and the Black River, which flows past Observatory and northwards along the M5, to exit to sea at Paarden Eiland.

The Steenberg canal was filled not only with plastic trash, but dead dogs and cats, and electronic goods. And in the Black River, the paddlers were surprised by a floating island of plastic trapped by hyacinth. Water samples taken in the Black River for E.coli – a microbiological indicator species – revealed colony forming unit (cfu) counts of up to, and in places over, a million per 100ml. According to national guidelines for intermediate contact with water (such as kayaking) anything over 4,000 cfu per 100ml is unacceptable. Winter said counts of a million are consistent with untreated sewage.

The pollution the paddlers found in the Black River was in spite of a citizen-led mass cleanup of the river in May 2019.

“As paddlers we shouldn’t even have been on the water,” Winter said.

There are an average of 400 sewage spills in the city daily, according to reports tabled in the City’s Water and Waste Portfolio Committee meeting on 5 September. Unless contained, these drain into waterways.

Yet the water and sanitation department has vastly underspent its capital expenditure budget for the past two financial years.

Reports tabled in the Committee meeting note that only R1.5-billion out of a water and sanitation department capital expenditure budget of R2.3-billion had been spent in the 2018-19 financial year ending 30 June. That is only 64.5% of the budget.

In the previous financial year, only 55% of the capital expenditure budget was spent.

And spending does not seem to have improved so far this financial year. In July, the first month of the 2019-20 financial year, only R7.1-million of the capital expenditure allocation of R36.6-million for that month had been spent. Expenditure figures for August were not presented. The department believes expenditure will increase to reach the 90% spend target over the next 11 months.

The maintenance and replacement of the sewerage network is sorely needed. The committee reports note there are 7,000 to 12,000 sewage spills across the metro every month.

Work on replacing water mains went better, with the department replacing 15.9km of piping out of a target of 20.5km.

The solid waste department’s operating budget — which could be used for cleaning the waterways — was also being underspent, with just R181-million or 67.5% of the July allotment of R268.2-million having being spent.

The department noted there were 1,067 vacancies out of a staff establishment of 8,366.

Inland water quality results were also discussed in the portfolio committee meeting, and although full reports and data sets were not provided, results presented reveal that over half, or 55.5%, of the City’s inland waterways are polluted to the point that intermediate contact with the water is a risk, with 40% of them labelled as “unacceptable risk”. Of the inland water bodies, 21% are at the most extreme pollution category provided in the national water quality guidelines, which is “category 3”.

Avid fisherman Quentin Bouwer says he has caught fish in the Black River deformed by plastic rings around their tails, and whenever he reels in, plastic bags and rags are caught on his line. He knows better than to eat the fish he catches, but knows other fishermen who sell their catches of carp and barbel to restaurants that have immigrants as their clientele. Photo: Steve Kretzmann

The data presented reveals that the City is well aware that samples from the Black River show more than 100,000 E.coli cfu per 100ml, which places the river in “category 3”.

This means there are “chronic ongoing or extreme pollution incidents”, that “urgent management intervention to trace the source of the contamination is necessary”, and that extra funding is likely to be required.

The other “category 3” polluted waterways are the Khayelitsha stormwater system and the Big and Little Lotus Rivers. 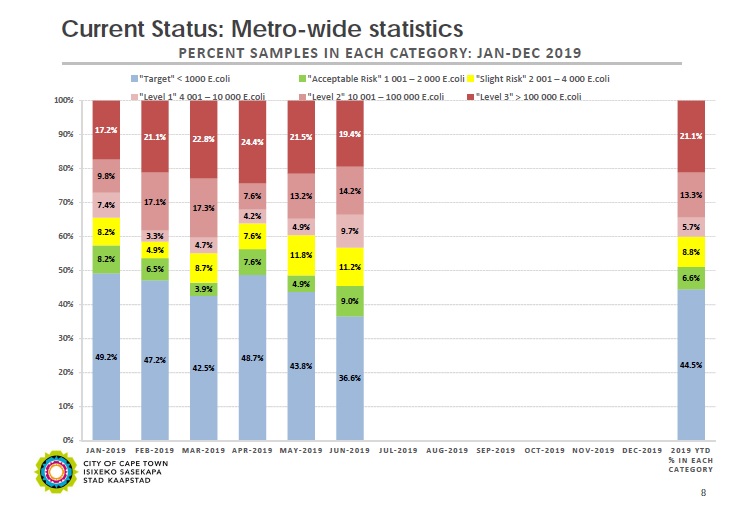 A graph of Cape Town’s inland water quality monitoring results presented by the City department of water and sanitation in a report to the Water and Waste Portfolio Committee on 5 September.

Although the City has water quality data updated monthly for inland water bodies and fortnightly for coastal waters, it does not tell the public the results of the water quality tests. No results have been presented at subcouncil meetings since 2013 and the last data set available to the public is from 2016. A promised new report showing the results of the water quality tests across the metro has been delayed for almost a year, with no reason given other than the report has to proceed through council. DM

In response to questions sent on Wednesday morning, the City told GroundUp it would not be able to meet a 5pm deadline. City comment will be added when it is received.