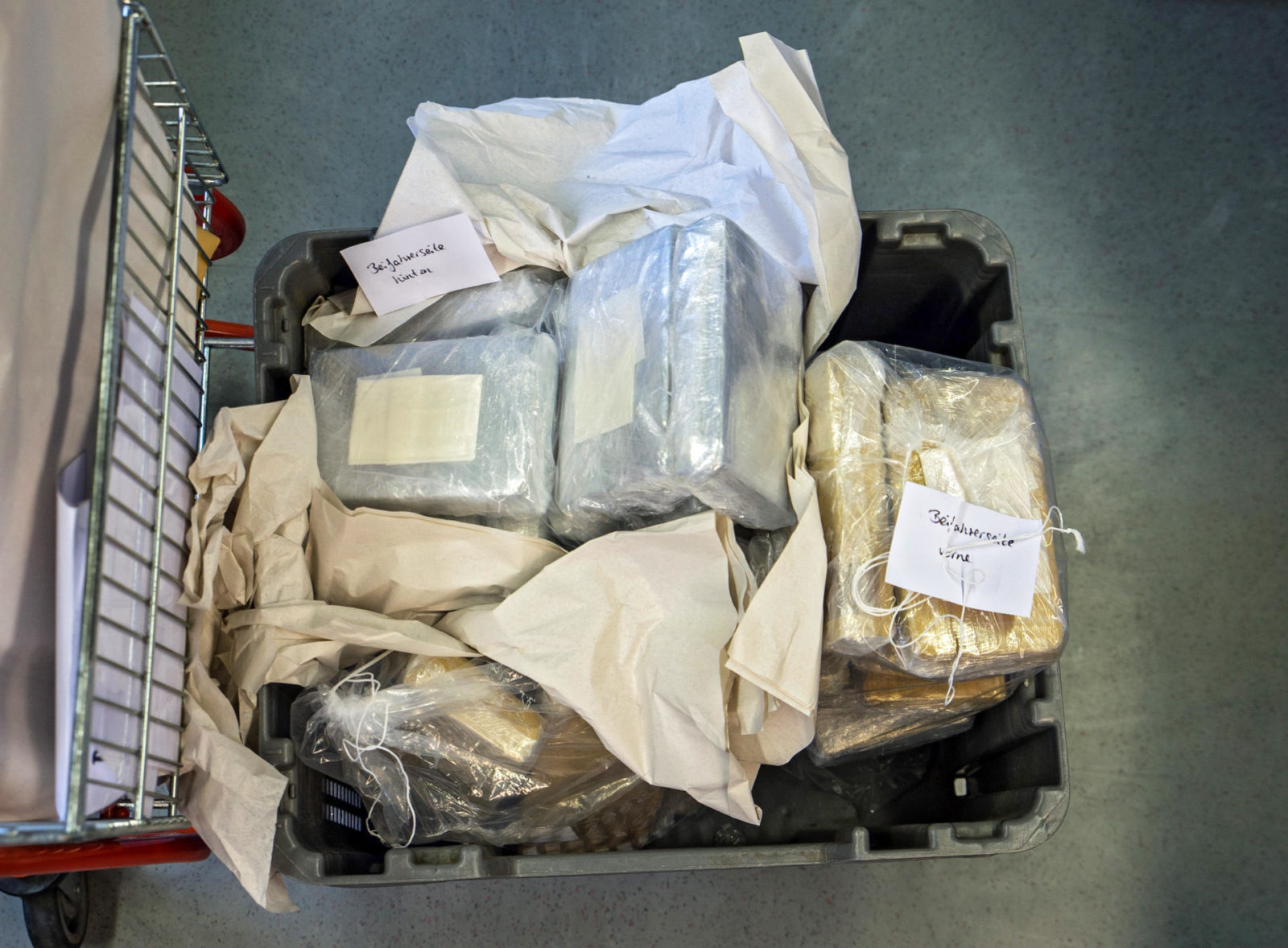 Illustrative photo: A box with seized blocks of cocaine and amphetamines at a press conference in Darmstadt, Germany, 31 March 2016.EPA/ANDREAS ARNOLD

US-Kenya efforts to bring down the Akasha drug ring could launch a bigger crackdown on trafficking.

The first sentencing of a Kenyan on drug trafficking charges took place in New York on 16 August. Baktash Akasha, son of Akasha Abdalla, who built one of the biggest drug trafficking operations in East Africa, has been sentenced to 25 years in prison and ordered to pay a US$100,000 fine.

Ibrahim Akasha, Baktash’s deputy and also his younger brother, is due to be sentenced in November. The Akashas were arrested in Kenya in November 2014. The charges against them included bribing Kenyan officials in an attempt to avoid extradition.

Days before Baktash’s sentencing, Kenyan police raided the house of Ali Punjani – believed to be a close associate of the Akashas and allegedly a well-connected tycoon in Kenya’s political circles. This came after renewed calls by Interior Cabinet Secretary Fred Matiang’i pointing out that the war on drug trafficking would also net prominent Kenyans. Punjani’s whereabouts is unknown.

The Akashas’ prosecution is being handled by the United States (US) Terrorism and International Narcotics Unit. This is because apart from narcotics, the Akashas trafficked weapons with violent extremist group al-Shabaab which were then used to protect the Akashas’ networks and eliminate rival drug gangs operating in the region.

Speaking to the ENACT organised crime project on condition of anonymity, a Kenyan law enforcement officer said the Akashas’ arrest followed a ‘controlled delivery investigation’. This allows for illicit consignments to be shipped, while being tracked by authorities.

In an undercover investigation, law enforcement agents disguised as drug dealers collaborated with the Akashas to transport 99 kg of heroin and 2 kg of methamphetamine from Kenya to the US. Every stage of the operation was monitored and evidence collected. The Akashas delivered the consignment and expected to deliver hundreds of kilos more.

The police officer expressed frustration about ‘influential under-hands’ – powerful people who wanted to prevent the case from coming to trial in a Kenyan court, despite overwhelming evidence against the Akashas.

After trying for three years to extradite them, the US government lost patience with the process. It sought to have the Akashas ‘expelled’ from Kenya before they bribed their way out of custody. The US Drug Enforcement Administration (DEA) brought the Akashas to the US in January 2017.

The DEA says the US intends to pursue suspects in connection with the case ‘until their capture and sentencing’. It appears the Kenyan government is working with US authorities to investigate prominent Kenyans the Akashas may have mentioned during plea bargaining.

In 2004, 1 000 kg of cocaine worth KES6 billion were seized in Kenya – one of the biggest drug seizures in Africa. In what is mapped by an ENACT policy brief as the heroin route along the east coast of Africa, Kenya isn’t only a transit point but is increasingly becoming a destination country, with around 55 000 heroin users.

The publication says the ‘human face’ of heroin usage manifests in Kenya’s main cities such as Mombasa, and is said to be causing social disruption and driving local crime.

Drugs in bulk are trafficked in Kenya through sea ports, and lesser consignments through airports. In August 2014, President Uhuru Kenyatta oversaw the detonation of a ship full of heroin worth KES1.3-billion. A year later, a yacht laden with heroin worth KES22-million was destroyed.

In 2018, almost 1 kg of heroin and methamphetamine sealed in wood carvings and air-bound for Greece and China was confiscated. In 2019 alone, several drug seizures, either in transit or destination, have occurred in Kenya.

In August 2019, 3 kg of cocaine worth KES11-million was found packed in Mombasa to be sold locally. In April, 12 kg of heroin were seized at the country’s main airport concealed as sandals en route to Liberia. In February drugs worth KES1.5-million were found hidden in a generator spare part destined for Guinea.

No proceedings were brought, amid counterallegations of political interference. Almost all those mentioned in the dossier have since moved to higher office. The dossier and the Akasha case are part of a wider pattern of Kenyan involvement in international drug trafficking.

With the sentencing read out, it remains to be seen whether prominent Kenyans linked to the case will be called to appear before the court as defendants or witnesses. What will that mean for the Kenyan war on drugs? In May 2019, Kenya and the US agreed on a bilateral strategic dialogue framework. This dialogue will review progress on the implementation of agreed areas of co-operation.

The Akasha case has showcased the success of inter-government collaboration in fighting transnational crime. This will inform the future of drug enforcement in Kenya as many international drug cartels have distribution chains active in Kenya.

By cutting off drug trafficking operations in Kenya, the flow of narcotics along the east coast of Africa will be disrupted. This could serve as a warning to traffickers in other parts of Africa where the war on narcotics is yet to reach crisis levels. DM

The ENACT project is funded by the European Union (EU). The contents of this article are the sole responsibility of the author and can under no circumstances be regarded as reflecting the position of the EU.