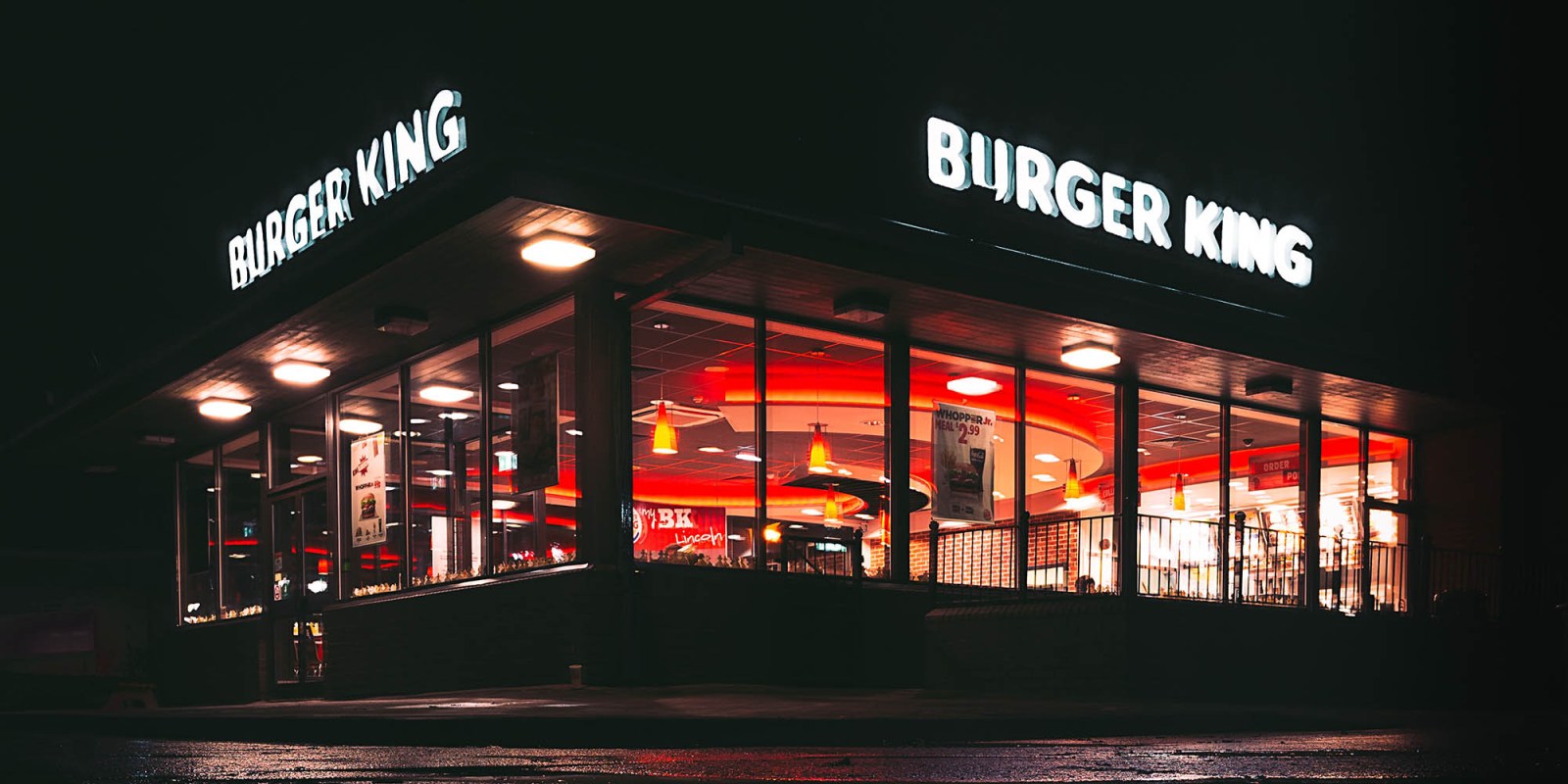 Burger King COO Juan Klopper estimates that the chain could open a further 85 stores across the country without saturating the market. (Photo: Matthew Feeney/Unsplash)

GPI was the classic SA empowerment story: a company set up by and for its shareholders to capitalise on BEE deals in the gaming industry sets out into uncharted waters to enhance returns for shareholders. It had the potential to go horribly wrong, but shareholder intervention coupled with stronger management may just have turned things around.

Burger King in South Africa turned over R1-billion in 2019 and earned a profit for the first time since it was launched in 2013. For Grand Parade Investments, which owns the brand, this was something to celebrate in what has been a rollercoaster year.

In 2013 critics argued that SA did not need another US-branded burger franchise, but license-holder Grand Parade pressed ahead with the launch of Burger King.

Since then GPI has opened about 86 stores around SA and in the year to June 2019 declared earnings of R23-million, vastly improved from the R54-million loss declared in the equivalent period in 2018.

But it nearly broke the company along the way, with capital invested from 2013 plus losses incurred by the foods division adding up to about R1.4-billion, well north of GPI’s market capitalisation of just more than R1-billion. Debt rose to R600-million and the share price fell from a high of R7.50 to R2.20 in December 2018.

Late in 2018, shareholders (a small group of institutional shareholders, supported by community shareholders) intervened and replaced two board members (following a vote at an extraordinary general meeting). After this, steps were taken to accelerate a business restructuring process. This saw GPI pay down some debt, stem the losses and improve profitability across non-performing group businesses.

The first step was to liquidate the company’s Baskin-Robbins ice cream and Dunkin’ Donuts businesses which were gobbling cash at a rate of R3-million a month.

GPI also examined its portfolio of Burger King stores, closing the four least profitable and implementing plans to open another 18 in the coming three years. Out of its portfolio of 86 stores, 15 earn a return on assets of less than 1%, 31 earn an ROA of between 1% and 16% and 40 earn between 16% and 67%.

A key objective for the year was to improve the profitability of Grand Foods Meat Plant (which was set up to supply Burger King) and Mac Brothers (which supplies stainless steel kitchens, and more recently hospital ware). Both businesses showed improvement in earnings in the period, with Grand Foods Meat Plant improving its headline earnings loss by 54% while Mac Brothers improved by 97%.

As a result, group revenue increased 28% from R1.1-billion to R1.4-billion, net profit from continuing operations rose 308% from R17.8-million to R72.9-million while the net loss for the year reduced from R49-million to R36-million.

The headline earnings per share improved from a prior year loss of 11.2c to a profit of 9.7c.

“It has not been an easy journey for GPI over the past year as we navigated through an extremely challenging economic environment while addressing some of the fundamental issues in the businesses,” says GPI CEO Mohsin Tajbhai.

Future prospects are tied to the Burger King business and so it is no surprise that Tajbhai, an engineer with a love for business, who was appointed a director in December and CEO in July, is very optimistic about its prospects. “We always guided the market that we would get there [to profitability]. But the restructuring process of this year left us with more room to focus on Burger King, which is where we see much more growth potential.”

Despite SA’s stagnant economy, the quick-service industry grew by 7% from 2017 to 2018, adds Juan Klopper, the COO of Burger King.

Up to 70% (40 million people) of South Africa’s population eat take away food, he adds.

“The potential for growth is enormous.”

While Burger King is the 8th-largest quick-service franchise in the country, it has the smallest footprint by a mile. Klopper estimates that the chain could open a further 85 stores across the country without saturating the market. 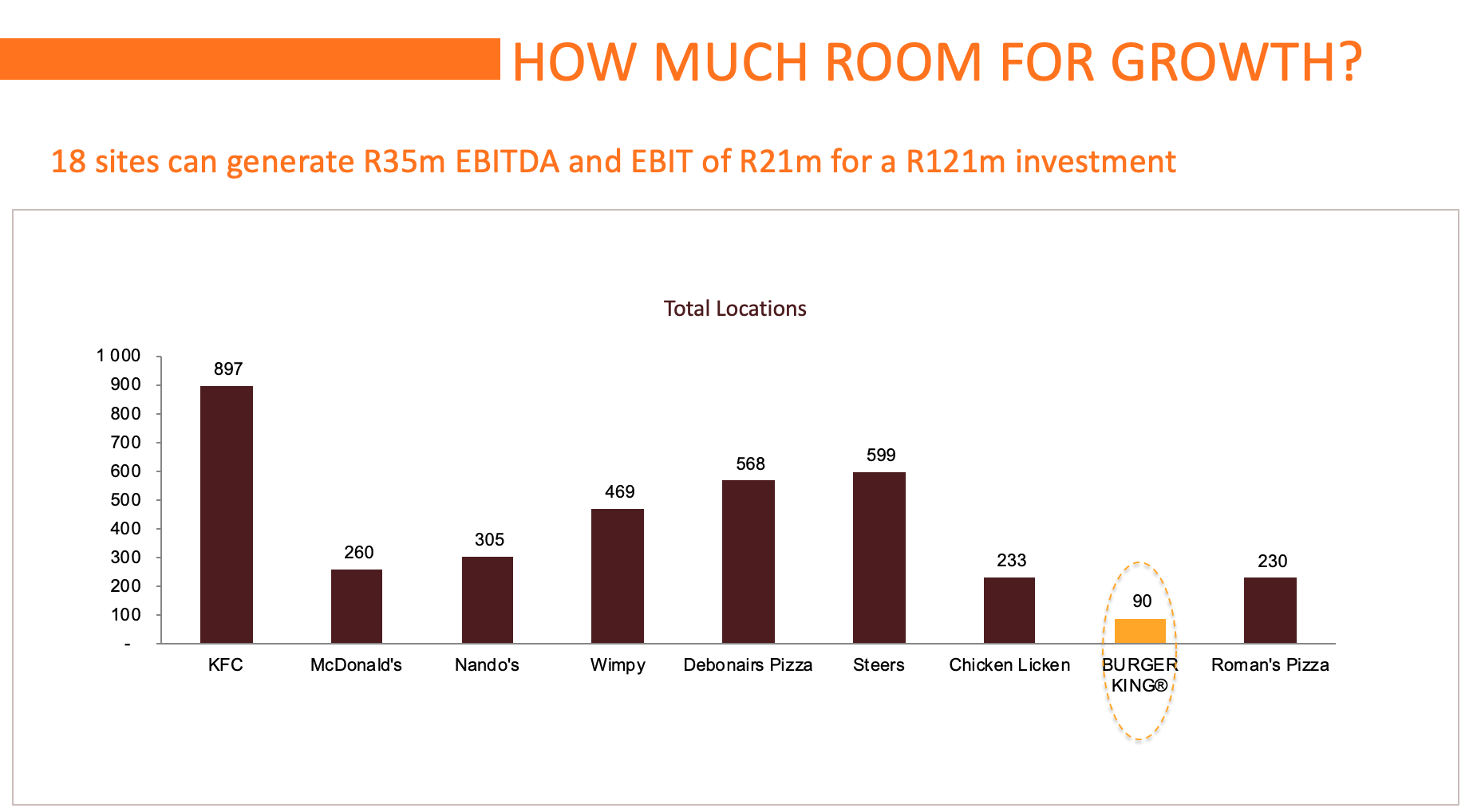 “The Burger King trajectory is very encouraging,” says Ricco Friedrich, a portfolio manager with Denker Capital, one of the GPI shareholders that agitated for change.

“Things are moving in the right direction as a result of past learnings and mistakes. The company is still carrying the legacy store base, which will never do well unless they renegotiate rentals, reduce size or close them. But new stores are delivering the types of returns that shareholders expect to see.”

What concerns investors is the significant capital spent on setting up each new Burger King. It’s in the vicinity of R6.7-million a store, similar to the cost of a smallish Spur, but with lower turnover.

“There is another R120-million going into the next 18 sites. Management is happy that the returns are there, so it is something we will watch,” says Friedrich. “That’s the thing with international brands, all they are interested in is royalty income on turnover, so they push for more stores and don’t care about returns.”

Another concern is the bloated head office, which the company arguably has little need for as functions are moved out to the Burger King offices. Costs have been reduced by 14% and there is a plan to sell the property itself, 33 Heerengracht, on Cape Town’s Foreshore.

Shareholders also queried what seemed to be poor deal-making on the part of GPI – in particular the sale of its stake in Sun Slots back to Sun International for R504-million.

“Slots is the best-performing asset in GPI; it has been refurbished, is debt-free and is about to spew cash flow,” says Anthony Clark, an independent small cap analyst. “GPI sold the stake back to Sun at what many believe was a bargain price of six times earnings. Surely a better price could have been extracted?”

In addition, GPI sold down its stake in Spur for R260-million, which is less than the acquisition and funding cost, says Clark.

However, Tajbhai says what is important is the sale will reduce group debt and leave its remaining 8% stake in Spur unencumbered.

In addition, the company is determined to reinstate its dividend, which it passed over last year.

“The sale of assets will free up dividend for shareholders,” Tajbhai says.

Friedrich agrees that payment of dividends is important to shareholders – the company’s institutional shareholders as well as its 8,000-odd retail investors, who hold on average fewer than 10,000 shares each.

“We are comfortable with the payment of a dividend this year — GPI is profitable and has a better line of site in terms of its capital commitments. However, to pay a sustainable dividend going forward, Burger King must grow profits.” BM