With elections looming in Botswana and Mozambique, SADC watchdog must grow some teeth 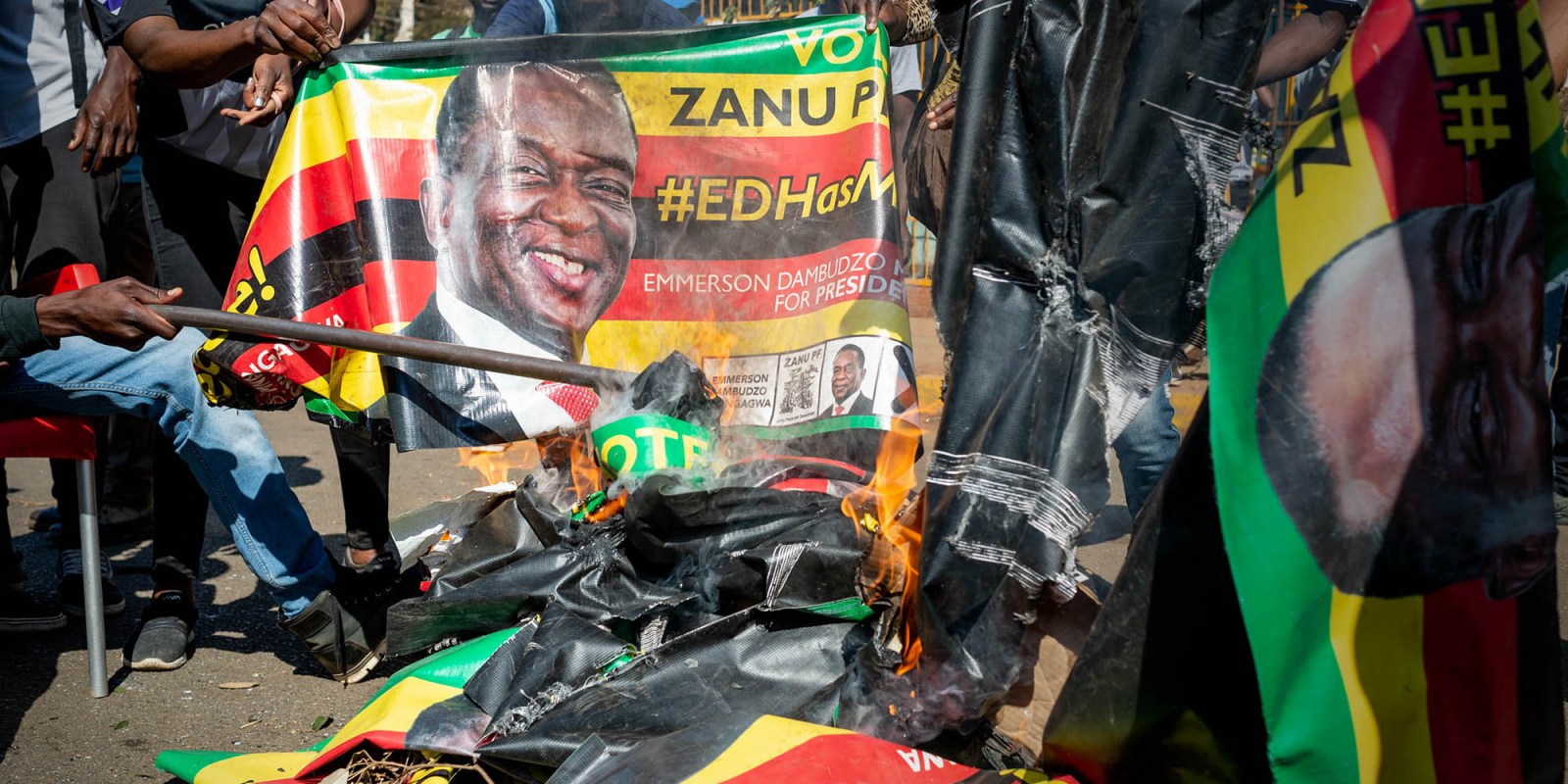 Archive Photo: People light fires in the streets during a protest against polling results in Harare, Zimbabwe, 1 August 2018. The day saw protests turn violent when police fired rubber bullets and teargas, before the army was called in and began firing live rounds. (Photo: EPA-EFE / Yeshiel Panchia)

SADC has a responsibility to condemn government attempts to clamp down on criticism or peaceful protests arising from disputed elections to ensure peace in the region. With elections looming in Mozambique and Botswana, SADC’s credibility as a custodian of democracy will be measured by its response to events there.

The Southern African Development Community (SADC) — charged with promoting election integrity, strengthening democracy and advancing human rights — is failing. The latest evidence comes from Malawi. The next tests will come in Mozambique and Botswana where elections are due to be held in October 2019.

In Malawi, opposition members and human rights activists have held regular demonstrations since the country held elections on 21 May 2019. President Peter Mutharika of the ruling Democratic Progressive Party won the elections with 38.5% of the vote, but the results were widely disputed by the opposition Malawi Congress Party and the United Transformation Movement. The parties are contesting the results in the Supreme Court and allege the vote was marred by fraud and mismanagement of the election process by the Malawi Election Commission (MEC).

Thousands of Malawians have since taken to the streets, calling for the resignation of the chairperson of the MEC. The government has responded with threats, intimidation and attacks against human rights activists, and censored broadcasters attempting to cover the protests.

SADC’s lack of response and unwillingness to condemn electoral flaws and pre- and post-election violence is nothing new. The body has often failed to publicly release the final reports of its election observer missions, presumably in deference to the demands of its member states not to do so.

Worryingly, SADC’s reticence in condemning election-related violence, especially by the authorities or ruling parties, has emboldened autocrats. In the aftermath of Zimbabwe’s disputed July 2018 elections, police arrested scores of opposition members and on 1 August 2018, soldiers shot and killed at least six unarmed civilians during protests over delays in releasing the election results.

Despite growing concerns by the opposition and civil society over the independence of the Zimbabwe Election Commission, issues with the voters’ roll and delays in release of the results, SADC endorsed the elections, stating that they “represented a political watershed in the history of the country”. While SADC later issued a joint statement with other international observers including the African Union, European Union and the Commonwealth condemning post-election violence on 2 August 2018, it has never called for accountability for the killings that took place.

In the year since the elections, the government of President Emmerson Mnangagwa has violently suppressed protest and dissent. In January, human rights organisations reported that at least 15 people had been killed during protests over fuel price increases. The authorities have arrested hundreds of opposition and civil society activists, and security agents have been implicated in the abduction and disappearance of several government critics and civil society activists. All the while, SADC stays silent.

SADC similarly mishandled controversial elections in the Democratic Republic of the Congo held on 30 December 2018. After widespread disagreement by the main parties over the results, and the declaration of Felix Tshisekedi as the winner, SADC initially called for a vote recount, citing reported anomalies, later called for a government of national unity and then backtracked and endorsed the elections and Tshisekedi.

Despite these poor responses, SADC’s role in consolidating democracy and improving the quality of elections remains crucial if the region is to enhance trust in election processes and avoid widespread citizen disaffection and apathy. SADC has a responsibility to condemn government attempts to clamp down on criticism or peaceful protests arising from disputed elections to ensure peace in the region. With elections looming in Mozambique and Botswana, SADC’s credibility as a custodian of democracy will be measured by its response to events there.

Mozambique will hold general elections on 15 October, the first since the death of the opposition Renamo leader, Alfonso Dhlakama. A recently signed peace accord to end armed hostilities between Renamo and the ruling party, Frelimo, remains fragile. Human rights organisations have expressed concern at rising repression in the country, with increasing violence and reported abuses by the authorities in the northern province of Cabo Delgado, and a government clampdown across the country on freedom of expression, assembly and association. Municipal elections in 2018 were marred by threats, intimidation and attacks against civil society activists and journalists.

In Botswana, elections are due to be held on 23 October. The Botswana Democratic Party (BDP), which has ruled uninterrupted since 1966, finds itself up against a splinter group from the BDP, the Botswana Patriotic Front, led by former President Ian Khama, and a third party, the Umbrella for Democratic Change. The elections are likely to be highly contested due to the fracturing of the BDP and rising tensions between Khama and his successor in the BDP, President Mokgweetsi Masisi.

SADC has an opportunity to move beyond its previous passive observation of elections in the region. It should actively ensure that Mozambique and Botswana abide by the SADC Principles and Guidelines Governing Democratic Elections; raise its voice on Malawi; publicly condemn violence before, during and after elections; and hold governments to account if they fail to respect citizens’ rights to free expression, association and assembly.

Failure to take action will not only further dent the institution’s reputation, it will also erode citizens’ trust in the efficacy of elections in delivering democracy. DM

Tiseke Kasambala is Chief of Party of the Advancing Rights in Southern Africa Programme at Freedom House.