Enough of the narrow world: Ramaphosa must bestride the South African stage 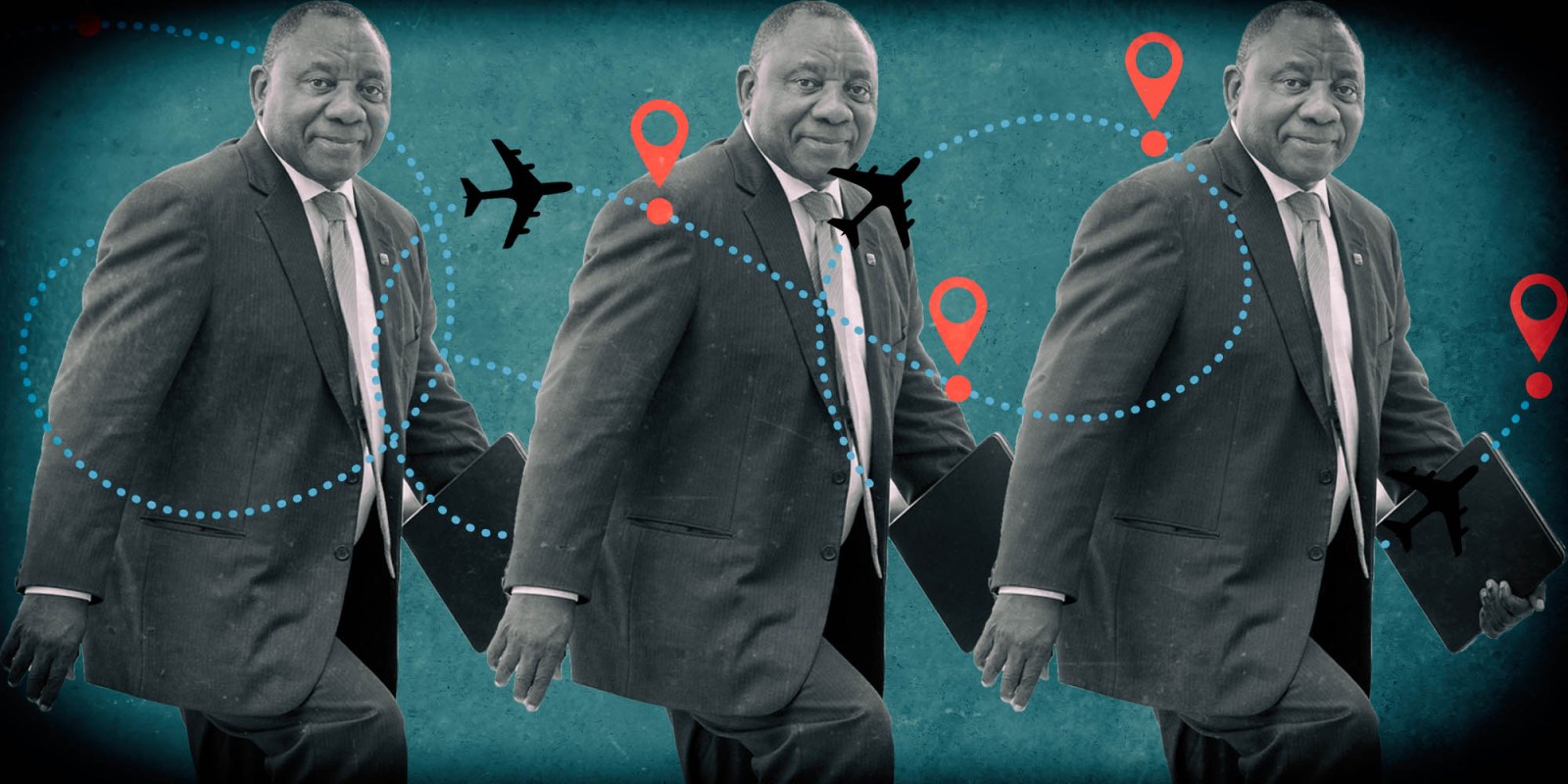 Cyril Ramaphosa’s image as a reasonable statesman is a great plus on the global stage. But he does not have to rub shoulders with Jack Ma to sustain that. He has to be seen as the man in charge of Africa’s most powerful economy.

Cyril Ramaphosa would have breathed a sigh of relief when the curtain was brought down on the Nasrec conference in December 2017. So uncertain was the situation that at one stage it looked like he might not deliver his closing address. A video circulated showing him persuading his faction to accept the vote that delivered an unthinkable situation – that had Ace Magashule as the party’s third-in-command, against his own faction’s expectations of a Senzo Mchunu victory.

In the video, Ramaphosa is heard saying the outcome gave his faction the beachhead from which, presumably, to launch a total onslaught for power at the right time. Five hot days later, everyone went back to their ordinary lives as servants of the fractured ANC, tenderpreneurs, and the like.

One of Ramaphosa’s tasks as the newly minted ANC president was to defuse a standoff outside the Union Buildings. A group of men in traditional Khoi and San outfits had been on a protest – which included giving up food – for several weeks. They were gaunt and faint. Government mandarins had tried and failed to get them to go home for Christmas, if indeed they celebrated the holiday, or just go home. Strokes, and even death, were feared.

The matter was escalated to many ministers, and even David Mabuza, the new deputy president. It was only when a relaxed-looking Ramaphosa, in a viscose shirt, came out to meet the handful of Khoisan rights activists that they agreed to go home, having explained their cause for the greater recognition of their rights and culture. Done.

That Ramaphosa was never seen again. The man who went on to be Jacob Zuma’s successor is a reserved, and scared-looking leader who hides behind the meticulous process and bureaucracy. His intervention in the Khoisan case was unlikely anyway, as his aides, reasonably, would have sought to avoid him meeting with the future protesters in case they established a precedent, what with South Africa’s ubiquitous problems and its protest culture.

The officials in the executive office had a great start in presenting him as a caring South African when his time in office kicked off. He created a goosebump moment with his Thuma Mina master-strokes, when he ditched his intellectual crutch in the form of Ben Okri quotes for a few verses from Bra Hugh, the great icon. What a moment.

That quickly fizzled out, however, when he did not sustain the wave he had ignited. Instead, he went for walks at 5am, surrounded by ANC gatekeepers. This presented the whole Thuma Mina affair as one where the Pule Mabes and the Mzwandile Masinas were prominent players, never mind the impact in terms of the strategic branding of the exercise. It was just a party campaign.

The ANC being the ANC, all that positivity simply evaporated, and its stale fragrance and the tapestry of arrogance and contempt for reason became the dominant face. With that, the mirage of a New Dawn disappeared, and Ramaphosa took the back seat.

He left South Africa, literally and figuratively. Hobnobbing with the Queen of England and the Jack Mas of this world became his favourite place to let off steam and seek to boost South Africa’s standing in the global investment world. He became the Zakumi of his own investment drive.

Put differently, he was like the person with the bonbons, or the operators of the confetti at some sort of party. But the party was about the ANC’s ugly side: poor governance and insipid economic management. All this exploded two weeks ago when people attacked others in the streets. The smart alec argued about whether it was xenophobia, Afrophobia, or phobiaphobia.

Whatever it was, it was an ugly event in South Africa. Ramaphosa pulled out of his trip to the United Nations. He spent time at home. He even went to pay his last respects to Robert Mugabe, where he was booed. At the same time, he earned some respect for his smart handling of the hostile moment. Sincere and vulnerable, he appeared. He then took a tour of his backyard, went to the East Rand, the Eastern Cape, and even hosted a special sitting of our houses in Parliament. All talk, but still, he was present and vulnerable nonetheless.

This is the kind of vulnerability that can earn him another chance at the perception of a man in control. The vulnerability comes from the fact that he is the only driver of his faction. He has no deputy he can send to troubleshoot.

In 2018, he abandoned his Commonwealth trip to London and flew home hurriedly to sort out a political stalemate and political unrest on the North-West border with Botswana. Nobody knows what the cause or the solution was. Yet Ramaphosa dumped his peers in London, leaving the impression that Rome was burning.

Not many people would have realised that he did not attend the United Nations. The fact that it’s our turn on the Security Council is immaterial in the bigger scheme of things. Not many people will listen to a man who has no authority at home. It was a potential diplomatic fallout with Botswana at the centre of the North West unrest that, among other things, saw him rush home.

Botswana is a country whose significance in world politics is its insignificant population. The day it organises a one million person march will make global headlines. In a world order that has far crazier and serious issues to deal with, from Boris Johnson and Donald Trump to trade and oil wars, Ramaphosa is dwarfed on the big stage. So much so that an Associated Press reporter did not recognise him among global leaders at the recent G7 summit.

It is not all bad for Ramaphosa. The populist wave is his advantage. He runs a fairly stable institutional framework, despite its economic and other social indicators painting a terrible picture. He is not about to appoint his son to run the South African Reserve Bank, something that is no longer unthinkable in Turkey (although it’s okay for his son to create networks with Bosasa). The emerging world is a safe haven for the economic and global politics world. For investors seeking good yield, South Africa remains a good place. This is even more so after Moody’s indicated it may not junk the Rainbow Nation this year.

So, Ramaphosa’s image as a reasonable statesman is a great plus on the global stage. But he does not have to rub shoulders with Jack Ma to sustain that. He has to be seen as the man in charge of Africa’s most powerful economy.

He needs to spend more time at home, dealing with domestic issues. It’s his first term, dammit! Global hobnobbing should be left to the second and exit term of office, in preparation for a role as an elder, the kind who wants to join the Bill Clintons and other retired statesmen.

What puts Ramaphosa in a quandary is his inner circle. It is full of serious professionals and sensible people. Yet not a single one of them can walk into Alexandria and quell a battle for a spaza shop’s stock. His own Cabinet seems preoccupied with being preoccupied. If they are not selling hoax minerals Down Under, they are nowhere, literally. You can count them. They exist only on social media, and you wonder if Fikile Mbalula, Tito Mboweni and others are still alive, or if someone else is tweeting on their behalf.

Never has such a dull and lethargic Cabinet or faction existed in South Africa before. That’s wherein Ramaphosa’s vulnerability lies. His is a one-politician show mustering a Herculean attempt at creating a facade of a stable presidency. If he sustains this, he may get more supporters and the scars he will collect along the way will prove fruitful. DM