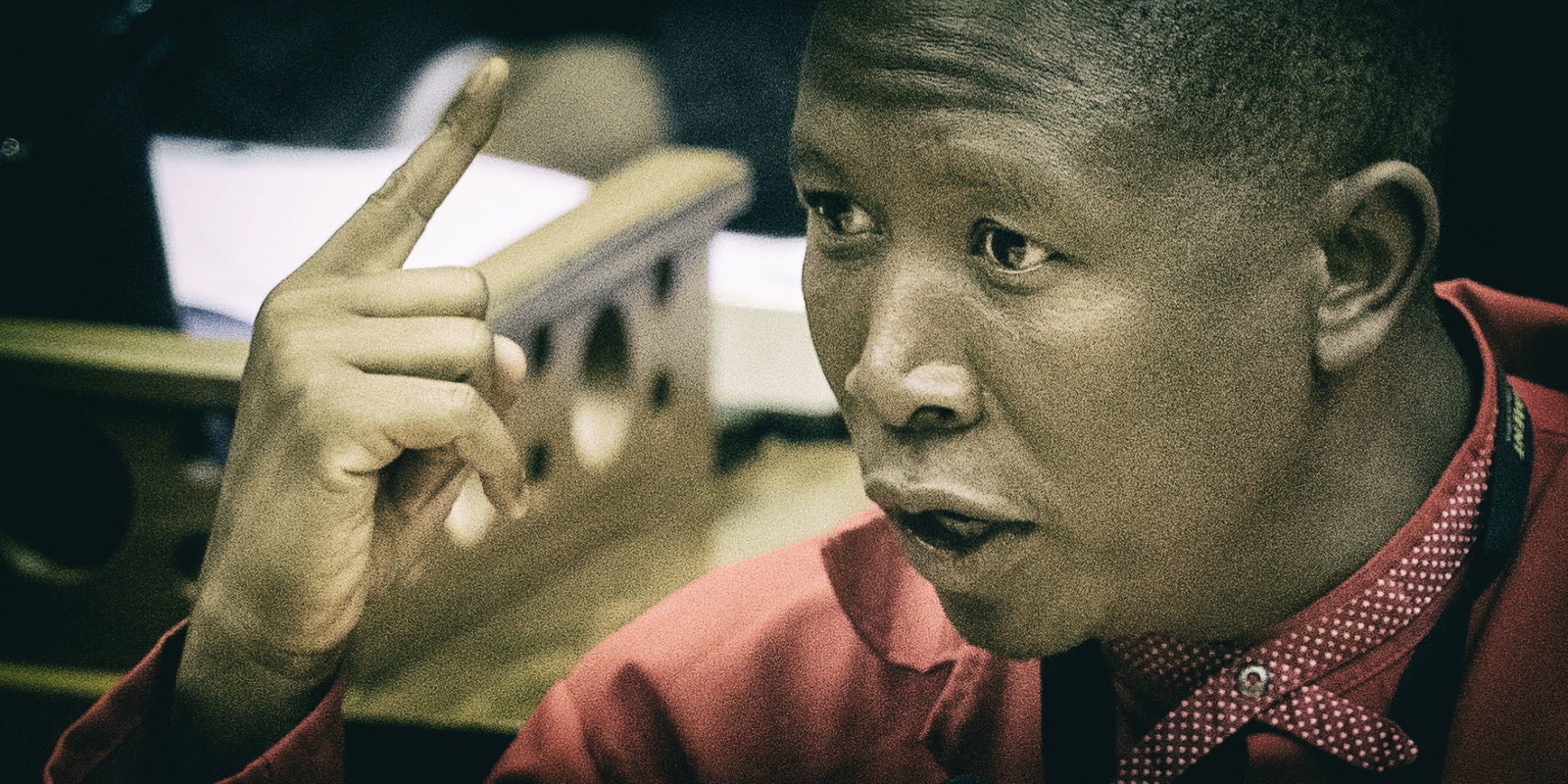 The fourth parliamentary debate on matters economic in two weeks showed, again, how each political party insists only it has the answers. On Tuesday EFF leader Julius Malema hit the usual notes of blaming the white-dominated private sector and ANC incapacity. But he couldn’t escape the VBS scandal.

EFF business often unfolds accompanied by a good old dust-up. And Tuesday was no different. Angry swearwords were uttered just off mic, and escalated to scuffles among opposition MPs.

It was “VBS” muttered from the DA benches that got EFF leader Julius Malema to react, targeting Galeb Cachalia with some choice words. DA MP Denis Joseph intervened and had his tie yanked as several other EFF MPs, including Marshall Dlamini, national spokesperson Mbuyiseni Ndlozi and secretary-general Godrich Gardee joined the fray — as did at least two DA MPs.

While DA Chief Whip John Steenhuisen stood on a point of order, saying presiding officer Madala Ntombela should have ordered an investigation as “it is not acceptable for members to be threatened”, Ndlozi downplayed the incident in the opposition benches.

“I don’t know what must be investigated. People were talking to each other here… I saw the president of the EFF speak to another member until they were finished,” said Ndlozi, calling for the discussion on insourcing of workers to continue.

Malema had read off his opening address — “We carry the mandate of security guards and cleaners” — in what at best was a tepid delivery. Perhaps the EFF leader is more comfortable on the stage at party political events. One could have mistaken it for his parliamentary voice if it hadn’t been for the earlier swearword-driven set-to over the VBS catcalls.

The EFF has battled to shed persistent connections to the VBS scandal since it was detailed in advocate Terry Motau’s 2018 Great Bank Heist report that, among other details, sets out VBS links to EFF Deputy President Floyd Shivambu’s brother Brian Shivambu.

As recently as earlier in September 2019, Daily Maverick’s investigative unit Scorpio traced how Malema and others’ lifestyles were funded by some R16-million siphoned off from VBS.

Freedom Front Plus MP Wouter Wessels not only said Malema’s comments on the white-dominated private sector was motivated “to bleed us dry”, but also tackled the EFF leader on VBS.

“The EFF is stealing people’s money from VBS and then they talk about insourcing. Look into the mirror,” Wessels said before stepping off the podium.

But Malema’s lukewarm speech showcased the art of taking political digs, no matter what. He claimed EFF credit for the insourcing of more than 4,000 security guards and 1,000 cleaners at a monthly salary of R10,000 and benefits at the Johannesburg council, led by DA Mayor Herman Mashaba.

It was a point Malema returned to in sweeping the debate at the close:

“The DA should have asked our mayor of Johannesburg to come engage in this debate here. Our mayor in Johannesburg, our EFF mayor Mashaba, understands the insourcing much better.”

Commentary like this hints at potential fissures in the DA — the organisational review in the wake of a poor May 2019 election result that saw support drop is continuing — and is pushing political buttons. The DA mantra has long been that where it governs, it governs best.

And while the EFF was claiming credit and slating the ANC for governing in a state that can’t deliver services due to lack of capacity, the ANC took what seemed like a reconciliatory approach.

Although various ANC speakers insisted the governing party had the best possible solutions, from the national minimum wage to public employment programmes, agreement emerged that outsourcing had negative effects and impacts such as low wages and fewer benefits for workers.

“This debate is critical. It talks to (a) strategic goal of creation and retention of decent jobs for our people… As government we have done a great deal of work to bring together the collective energy to find a lasting solution,” she said before she segued into the 2018 economic stimulus package President Cyril Ramaphosa had announced in September that year, and other measures.

It’s a key takeout from Tuesday’s debate that the EFF and ANC emerged on the same page in thought, if not in measure. On 10 September in the DA-sponsored debate on the risk of prescribed assets — effectively government prescribing where investments are made — the EFF and ANC also agreed this was an option to drive economic growth.

Their approach was similar.

“You benefited as the apartheid government did it for 33 years. Why not now,” was how ANC MP Gijimani Skosana put it to DA MPs, while Shivambu said the DA was raising “false alarms to cause panic”.

The apartheid government used to “protect the jobs and happiness of whites”, said Shivambu, adding:

“There is nothing wrong with prescribed assets… if the policy is implemented within the correct developmental mandate and strategy”.

Such toenadering — even if both sides claimed to be the one with all the answers — is important in parliamentary politics.

Laying the basis for some potentially serious political horse-trading is likely, particularly on a host of potentially prickly issues, from the National Health Insurance (NHI) Bill to the process to amend the Constitution to expressly allow for expropriation of land without compensation.

With each of the three top political parties facing their own demons, it’s important not to forget that the first salvos in the 2021 local government election race have been fired.

Right now, the signals of different political dynamics are all there. DM