Behind the arrests: Hundreds of xenophobic attack suspects in custody, but is the ‘just a crime’ approach working? 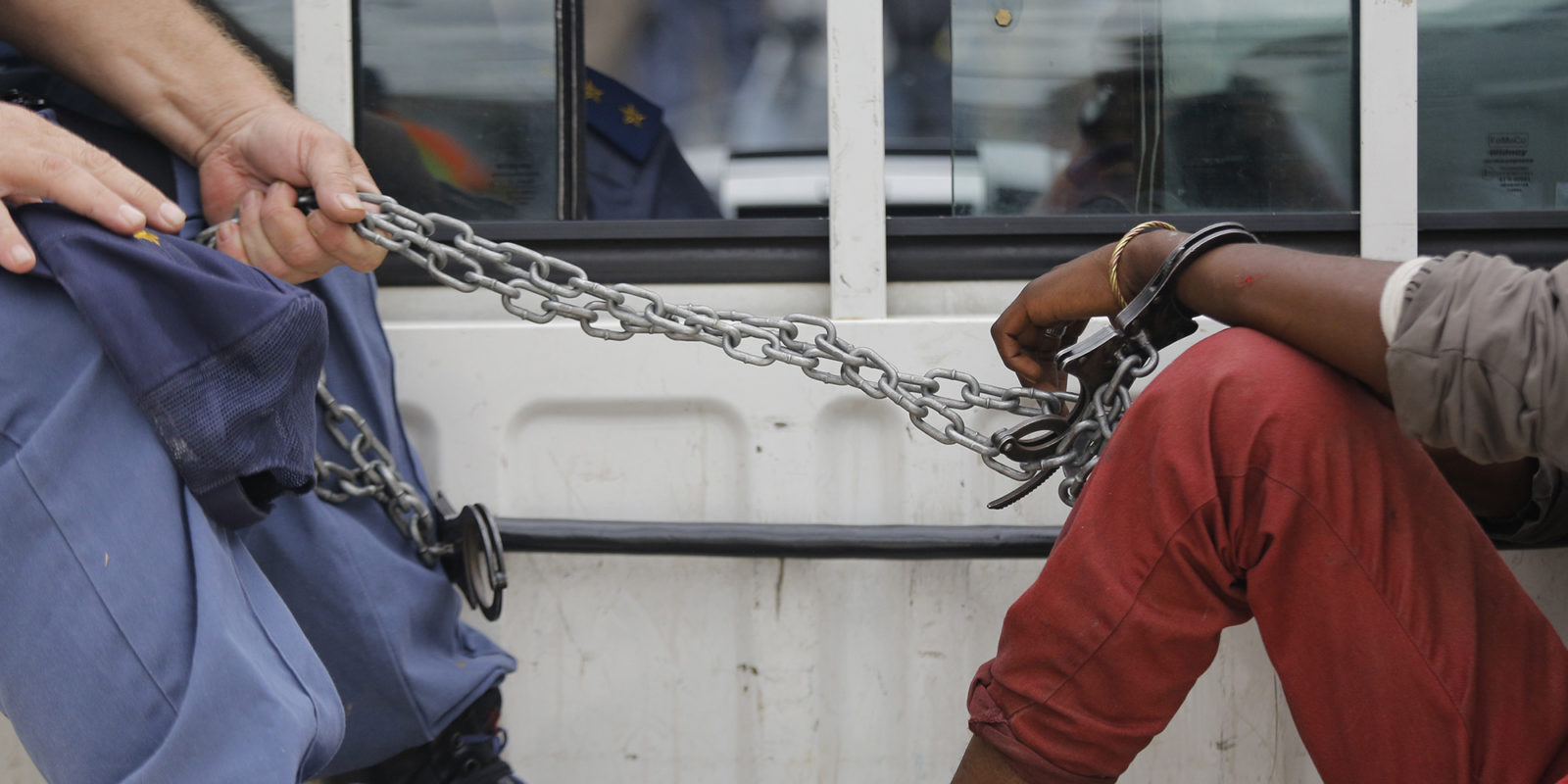 File Photo: A South African officer holds the chains of an arrested resident wo is allegedly involved in looting and clashes with foreign residents during a xenophobic march by the Mamelodi Concerned Residents through the streets of Pretoria, South Africa, 24 February 2017. EPA/KIM LUDBROOK

The Johannesburg Magistrate's Court's register of new cases for the first 10 or so days of September reads, as ever, like a typical South African horror story. It is a daily record of murders, rapes, kidnappings, and more. But for this period, it was made even longer, by row upon row of the names of those rounded up during the xenophobic attacks.

Arrests in connection with the xenophobia related attacks are often demanded by a public desperate to see law and order restored. In this latest bout of violence, 12 people were killed, and lives of many more were shattered, along with the shop windows of migrants and South African citizens alike.

The National Prosecuting Authority (NPA) said it was working closely with the police to deal with the bulk of new cases on the court roll. But there is concern among court officials that prosecutions will be difficult; that people will have been in custody for weeks before appearing in court for formal bail hearings, and that many migrants arrested on suspicion of being in the country illegally have not been detained lawfully.

‘ They just arrested the mob ‘

Justice cluster ministers said at a briefing last week that over 700 arrests had been made as a result of the violence. There are at least 109 public violence cases on the court roll alone, by News24’s count. The NPA said 185 people were in custody in Johannesburg on a variety of charges.

Court officials not authorised to talk to the media told News24 that due to the length of the court roll, just three cases have been set down for bail hearings, which will take place on September 25 and 26. News24 was told that everyone arrested, no matter how minor the charge, was denied the option of “police bail” and will have to make a formal bail application. This is because the police’s primary concern was keeping them off the streets until the violence subsides.

It is not clear yet whether the cases will be joined or whether the NPA will try to secure individual convictions. But a Johannesburg prosecutor, not authorised to talk to the media, said it would be virtually impossible to secure prosecutions in all cases.

“They just arrested the mob. Unless some of the looted shops have CCTV cameras, how do you prove who did what?”

Another court official said most of those arrested in Johannesburg have been detained in the general population section of Johannesburg Prison due to overcrowding. However, correctional services spokesperson Singabakho Nxumalo said remand detainees were not mixed with sentenced prisoners.

Asked to explain the NPA’s strategy in dealing with the issue, Gauteng spokesperson Phindi Mjonondwane told News24 last week the majority of South Africans who were arrested did not get bail, “as bail was opposed to show the seriousness of the criminal justice system in dealing with these cases, but the decision on bail is at the discretion of presiding officers”.

She added a meeting “to plan a way forward on how to handle these cases” was held with the Johannesburg chief prosecutor, advocate Pumeza Futshane, last Monday, with all police station commanders around the city.

“The NPA has committed itself to guide investigations on all these cases,” Mjonondwane said.

In Tshwane, she added, the NPA had invited the police to discuss the cases before first appearances “for guidance”.

“We cannot compromise on cases where suspects are not properly linked,” she said, adding the police had received training from the NPA on this issue before.

Mjonondwane added the NPA’s “doors are always open for the police”, saying stakeholder meetings with them were held regularly to discuss a variety of issues, including xenophobic violence.

While the NPA and the police strategise over the criminal cases, the hundreds of migrants who have been arrested in recent weeks face an equally uncertain fate.

Lawyers said similar scenes were played out in the last two weeks, to those of the August 7 arrests. Xenophobic violence also flared up then, as an armed mob reportedly marched through the Johannesburg CBD looting shops and attacking foreigners. The police arrested scores of migrants, suspected of being in the country illegally.

An attorney, who dealt with those arrested that day, said anonymously that men, women and children were rounded up and arrested on August 7, and only appeared before a magistrate on August 12.

The lawyer said they could only talk to the families of the arrested, not those who were detained. When the arrested people appeared before a magistrate, they were told they could only exercise their right to legal representation once they had been transported to the Lindela repatriation facility for deportation.

Department of Home Affairs spokesperson David Hlabane told News24 that 2 992 people had been sent to Lindela in July and August this year, compared to 1 808 in May and June.

Lindela has a total capacity of 4 000 people.

Sharon Ekambaram, the programme manager for Lawyers for Human Rights’ refugee and migrant rights programme, said documentation for migrants had become like the apartheid “dompas”.

She added it was unlawful for the authorities to simply arrest people en masse on suspicion that they do not have documentation without giving them a chance to find their papers, which they might not have on them at the time of arrest.

“They [law enforcement] are walking into restaurants and saying, ‘show me your papers’,” Ekambaram said.

Hundreds of people ended up queuing in court to see magistrates, she added, and they were promptly sent to Lindela. They are not afforded an opportunity to state their case, in contravention of a Constitutional Court decision that says migrants cannot be detained without appearing before a court for more than 48 hours.

Gordon said President Cyril Ramaphosa’s acknowledgment of xenophobia was an improvement in terms of the government’s attitude toward the violence, although this had not been the case for some of his ministers.

“It seems to me to be a strategic decision, to say that we can’t fight this as xenophobia, per se, but must address it as an issue of criminality. For me, however, what this does is avoid having to address the question as one of governance.

“The political logic of township governance, at least where the violence takes place, is one of communitarianism and exclusion. These are protection rackets that use foreigners as a tool to extract resources from the population and the state. If we talk about xenophobia as part of a political strategy, we start to reveal the dimensions of this system – one with which the ANC is fully complicit.

“By speaking of it as criminality, we depoliticise it and put the blame on [a] individuals and [b] structural inequality which we can blame on white monopoly capital and apartheid,” he said.

Research conducted by Gordon and his colleagues in 2018 showed that, from a national population probability sample of 3 000 people, a fifth of the adult population felt that the best way to stop xenophobic attacks would be to expel most or all “immigrants”. Just a tenth of the population felt that “resource management strategies” like job creation and poverty alleviation would help to stop the attacks.

The research could be interpreted as evidence of a deep xenophobic sentiment in the adult population, which political leaders so readily deny exists.

A researcher at the Consortium for Migrants and Refugees SA (Cormsa), who asked to remain anonymous as she had received threats, said the xenophobic attacks appeared to be well-organised.

Messages spreading on social media and WhatsApp threatening migrants were “drafted and planned”, she added, saying the influence of the men’s hostels in the city centre needed investigating.

The attacks have overlapped with attacks on foreign truck drivers.

‘A profound problem developing in the psyche of the nation’

Paul Verryn – a Methodist Church bishop who works closely with migrants, refugees and other vulnerable people – said he was approached by truck drivers to try to mediate, adding he had asked government ministers for help.

“This is one area [of violence] that we have to arrest. You can’t expect people to be incinerated in their trucks and they must just get over it.”

Verryn said there was a “profound problem developing in the psyche of the nation” – xenophobia laced with racism, that needed to be addressed systemically.

“We are not settled in terms of race and in terms of tribe,” he added, pointing to “very peculiar stuff” coming out of KwaZulu-Natal in recent weeks, linking anti-foreigner sentiment to Zulu tribalism.

“It’s something that worries me deeply. We waltzed out of apartheid, but we didn’t exorcise the ghosts of our tendency to prejudice, and to listen to prejudice.”

Verryn was bishop of the Central Methodist Church in the Johannesburg CBD when the 2008 xenophobic attacks took place.

He said the country was losing out on the positive impact on the economy made by migrants and refugees when they were forced to flee the country, as evidenced by the queues of Nigerians seeking to fly home from OR Tambo International Airport last week.

“At one time [during 2008], we had 3 500 people seeking shelter [at the church]. God only knows what potential we had sleeping on our steps.”

Verryn said creative, “visionary” leadership was needed to find ways to make inner cities more inclusive – to transform them from garish spaces with “high rises and horrible accommodation” to spaces that worked for everyone living in them.

Landau said there was no political will to fix the problem.

Peter Luhanga for GroundUp • 2 hours ago