Africa must help end the atrocities in Yemen, and start by ending its involvement 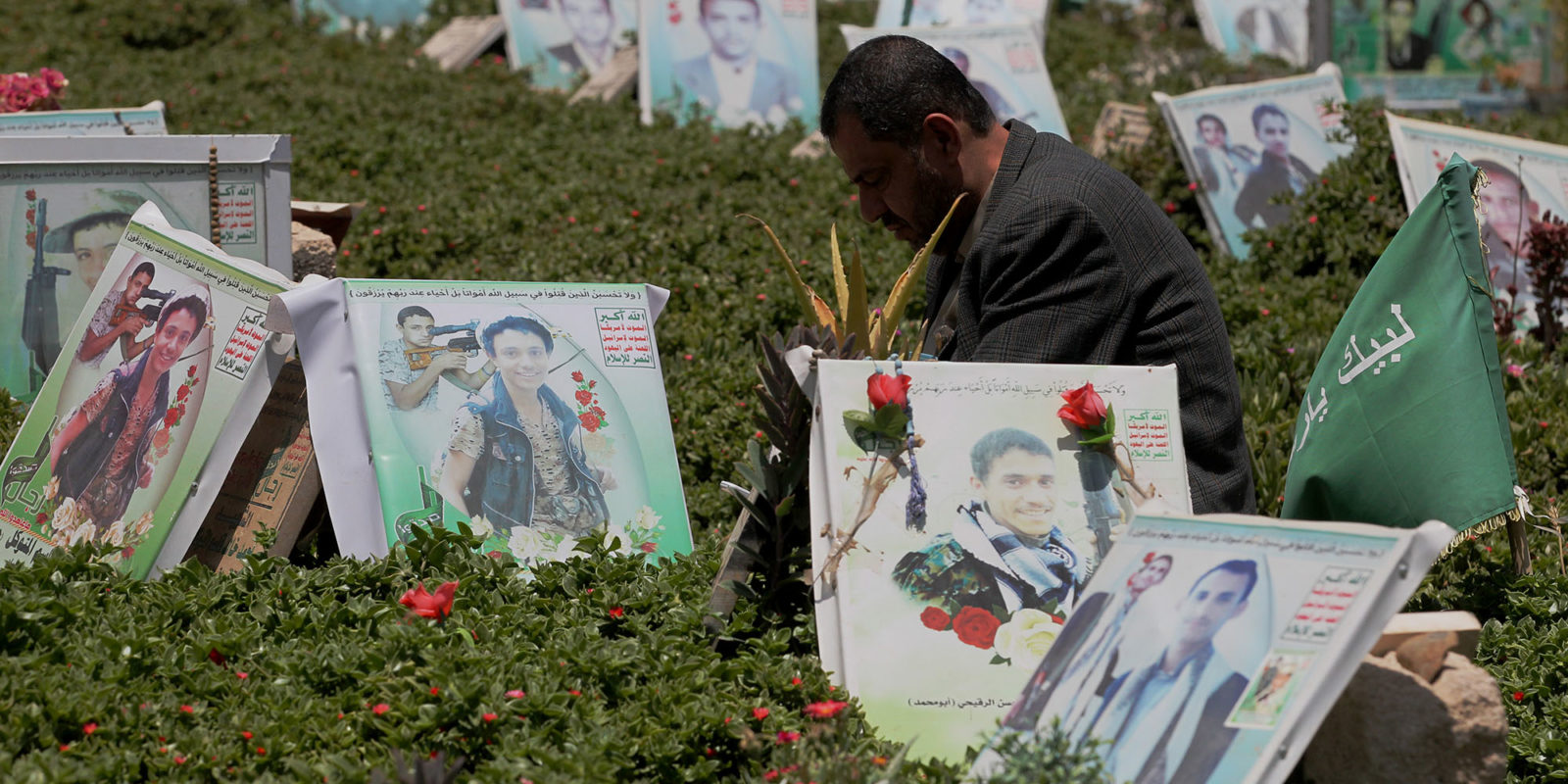 A man sits among portraits on the graves of Yemenis allegedly killed in the country's ongoing conflict, at a cemetery in Sana'a, Yemen, 12 September 2019. (Photo: EPA-EFE/Yahya Arhab)

With several African states actively complicit in human rights atrocities in Yemen, it is clear the Horn of Africa will not get stability and security without accountability and peace in that country.

My country of Yemen shares more with Africa than just the waters of the Red Sea and the Gulf of Aden; we also share a long history of migration, trade and diplomatic relations that spans centuries. Just as Yemen’s and Africa’s pasts are linked, so too will be our futures.

Yet over the past five years, this relationship has descended from friendship to conflict, as several countries in Africa have become embroiled in the devastating war in Yemen.

The Yemen war began in 2014, when the Houthi armed group took over the capital, Sana’a, and then much of the country. It escalated when a coalition of states led by Saudi Arabia and the United Arab Emirates intervened in March 2015.

From the beginning, Africa was involved.

Sudanese forces have fought alongside Yemeni groups backed by the Saudi/UAE-led coalition. From Eritrea’s Assab, which the UAE has leased for 30 years, the UAE launches airstrikes, has trained Yemeni forces implicated in grave abuses, including torture, and transferred prisoners, according to a UN investigation. Djibouti hosts Saudi Arabia’s first foreign military base. Egyptian vessels have been involved in enforcing the devastating coalition blockade which has exacerbated Yemen’s humanitarian crisis, delaying delivery of life-saving food, fuel, and medicine. By 2018, the Saudi state news agency was reporting that meetings of the coalition included representatives from at least five African Union states, including Sudan, Egypt, Morocco, Djibouti and Senegal.

These states have been sucked into what military experts agree is an unwinnable war. Saudi Arabia and the UAE initially claimed this conflict would last no longer than two months. Nearly five years on, there is no end in sight.

By the end of 2019, it is estimated that the war will have caused the deaths of over 230,000 Yemenis, while another 24 million – more than four-fifths of the population – need humanitarian aid to survive.

Independent human rights organisations like Mwatana, as well as the UN Group of Eminent Experts created in 2017 to investigate violations by all parties to the conflict, have documented unlawful airstrikes and indiscriminate shelling on civilians, widespread disappearances and allegations of torture, and child recruitment and humanitarian aid obstruction, among (too many) other abuses.

One year ago, Mwatana’s researchers documented Saudi/UAE-led coalition airstrikes in the Red Sea between Yemen and Eritrea that hit four civilian fishing boats. The strikes killed seven fishermen and wounded two. They destroyed the boats. These men had nothing to do with the war; they were merely trying to feed themselves and their families.

In this and so many other cases, Saudi Arabia, the UAE, and other coalition members have failed to provide credible investigations or redress to the families of the victims. Mwatana followed up with victims of some of the (too few) apparently unlawful coalition attacks where the coalition promised some form of amends. All the victims told Mwatana they’d heard nothing (other than the news), and been given nothing (not accountability, not redress, not even a phone call). Two victims of a 2015 attack on residential complexes on the Western Coast said that by 2018 they remained internally displaced: UAE and Sudanese forces had set up military camps in their home cities.

It is not just Yemenis being subjected to the war’s horrors. Around 55,000 East African migrants – over half of them children from Somalia and Ethiopia – have left the Horn of Africa for Yemen since January 2017, most seeking a better life in Gulf countries. Yet recent years have seen increasing reports of East African migrants being detained, tortured and raped in detention centres in Yemen, or being exploited by trafficking networks en route to Saudi Arabia. In 2017, the coalition attacked nearly 150 Somalians at sea – dozens were killed or wounded. Even as East African governments support the war in Yemen, African civilians are also its victims.

The widespread violations against civilians by parties fighting in Yemen will cause further cynicism about human rights, unless governments around the globe, including African countries, take a stand to make these protections more than words on paper.

African states that are members of the coalition, particularly Egypt and Sudan, should withdraw. The clearest way to signal peace is a priority is refusing to fight.

African states, like Eritrea providing military support to the coalition – including the use of their territory – should refuse that support for attacks in and on Yemen. Failing to do so means risking complicity in future unlawful attacks.

Other states in Africa also have an opportunity now to push for the accountability needed to make peace in Yemen sustainable.

Later this month, the UN Human Rights Council will vote on whether to renew a UN investigation into abuses in Yemen. This body offers the best chance towards accountability for the millions of victims of this war and could help lead to better protection of civilians in Yemen by increasing scrutiny on the warring parties and their conduct.

African states’ entanglement in this conflict, and the influence of Gulf States in East Africa, must not deter broader African support for accountability in Yemen. African states at the UN Human Rights Council – including South Africa, Burkina Faso, Cameroon, Rwanda, Senegal and Togo – can demonstrate support for peace and security not only in Yemen, but also in East Africa, since human rights violations and impunity on both shores of the Red Sea have long undermined regional security and stability. By supporting the renewal and strengthening of the Group of Experts, African governments can help write a new chapter in the story Africa shares with Yemen – one based on mutual respect for the rights of all our peoples. DM

Radhya Al-Mutawakel is the co-founder and Chairperson of Mwatana for Human Rights, an independent organisation working to defend and protect human rights in Yemen. She was listed by Time Magazine as one of the 100 most influential people of 2019