In the fraught world of ANC politics, Mboweni needs Ramaphosa to cover his back 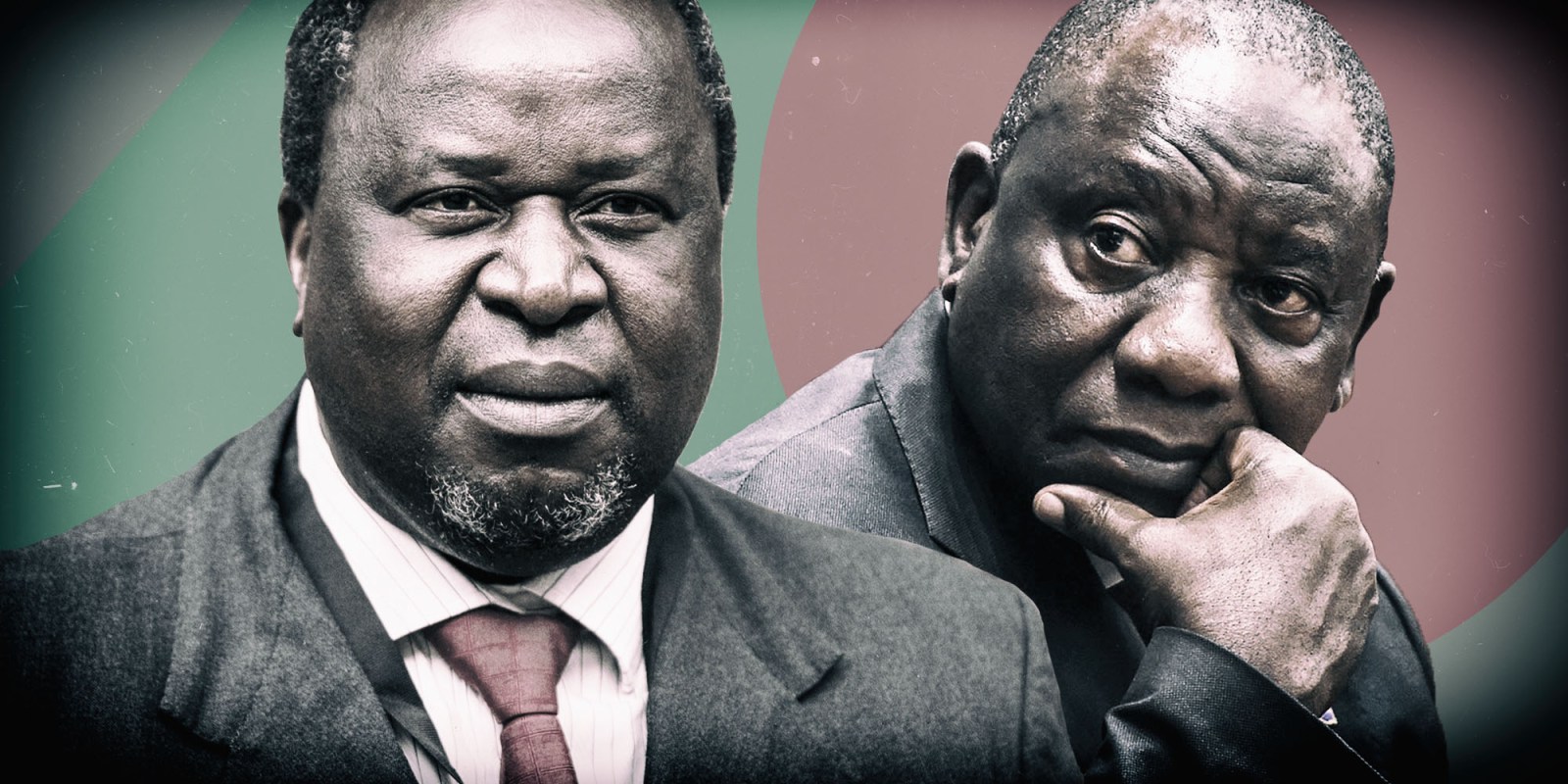 If Tito Mboweni’s economic paper is to survive it will need a political sponsor – it will need Cyril Ramaphosa to own it. So far, there are signs that the president is behind it.

“Just call me Thatcherite” – words attributed to Thabo Mbeki, when the then-deputy president rolled out an economic plan that later defined both his presidency’s success and demise. That was in 1996, when Mbeki, seen as the de facto prime minister under Nelson Mandela, grabbed the bull by the horns in mapping out a policymaking path that remains a key case study on how the ANC runs South Africa.

Tito Mboweni, was a youngish labour minister then. Right now, he is one of the veterans of the Cabinet and alongside Nkosazana Dlamini Zuma is allocated seats high up in meeting rooms, close to the president, who sits at the top.

Two decades later, Mboweni is where Mbeki was, albeit in a completely different set of circumstances. Mbeki had all the authority, legal and implied, when Mandela handed him the ropes to run his administration as one of the two deputy presidents (alongside FW de Klerk). Mboweni is only the economics policy figurehead under the Ramaphosa presidency. The chief of our public finances does not enjoy much political proximity, at least in the current ANC perking order, to Ramaphosa. He is only an additional member of the ANC national executive. He is just one among a hundred or so equals.

Mbeki was absolute royalty in the ANC, and an heir who was rammed down Madiba’s throat by the ANC exile establishment. He was an established thinker and an authority on economics, with a Sussex University stamp of approval, in addition to many years of drinking directly from Oliver Tambo’s fountain of wisdom as his protégé, speechwriter and all manner of roles under this revered leader.

Mboweni’s own history in our politics places him closer to Mbeki than to Ramaphosa. He was a student activist who moved from exile in Lesotho and ended up in Europe. He was one of the celebrated Ts of the GEAR (Growth, Employment and Redistribution) success years under Mbeki – the three Ts of Thabo, Tito, and Trevor, when Mboweni was governor of the South African Reserve Bank and Trevor Manuel the finance minister who earned accolades for the creation of a world-revered fiscal framework as he went on to claim a record as the world’s longest-serving finance minister.

The political cover is absolutely crucial if a finance minister is to succeed. Ramaphosa believes in Mandela-esque political moves. Everyone is equal and deserves a chance at the ideas table: from Minister Nkoana Maite-Mashabane to Mboweni. If Mboweni’s recently released economic blueprint for South Africa is to survive, it will need a political sponsor. It will need Ramaphosa to own it. So far, there are signs that the president is behind it.

But the ANC’s allies in the form of Cosatu and the South African Communist Party (SACP) have given lukewarm criticism of it. Blade Nzimande, the general secretary of the SACP, who is also Ramaphosa’s employee by virtue of being a Cabinet minister, says the 77-page document is not original and contains a smattering of suggestions made by the Organisation for Economic Co-operation and Development. He does not say why that is a problem, and why the content is not applicable to present-day South Africa.

Well, the SACP has a history of welcoming moves that later prove to be disastrous, and then crying foul. Zuma’s economics and corrupt moves are a case in point.

Cosatu is not happy with the document. It appears the lack of consultation in the drafting process is the trade union federation’s primary gripe. This is hardly surprising. The ANC’s allies are reluctant to accept their role as bridesmaids in the Tripartite Alliance. However, Cosatu and the SACP have long ceded their independence in terms of both policy and politics to the very same ANC by which they now want to be treated as stand-along allies.

There are inherent risks for the Ramaphosa policy path if history is anything to go by. GEAR became a proxy to build a platform for Zuma and remove Mbeki from the helm of the ANC. Unions and the SACP went on a forceful campaign that argued Mbeki’s policies were disastrous, while, in fact, it was the way in which he kept particular leaders of these formations at bay that was the source of the conflict. The alliance no longer clashes over ideology or policies, but about consultation. In short, the invitation to feed at the trough.

The Zuma era had its own moments. In his early years, a policy could be rushed through the system. It did not matter what its content was. The New Growth Path was crafted over Christmas and by the time everyone was done with the compliments of the new season, the plan was adopted at the ANC’s 2011 February lekgotla.

The National Development Plan was given blue-light treatment as it was taken to Parliament and quickly embraced by all and sundry, except Irvin Jim’s National Union of Metalworkers of South Africa (Numsa). The Mangaung conference of the ANC in 2012 simply embraced the document without ever discussing it. That was because the man on whose behalf it was done gave it absolute political cover. He owned it. It later died a slow death because, well, Zuptaring became more important than governing.

Mboweni can achieve a lot in the next three years or so. Ramaphosa may be getting some flak now, but the situation in the ANC is still more favourable. The opposition camp does not have much steam. It will make noise, up until the National General Council next year. History shows that the ANC president can sail through such meetings, barring a few bruises.

It is only in the second term that people look past the incumbent and seriously work towards the creation of new opportunities to feed at the trough. And when that stage comes, the policy is usually the first casualty as the radar is firmly placed on the dog-eat-dog-style ANC battles for power.

What Mboweni may need is more visible support from his boss. The finance minister is not alone in this boat – the much-vaunted political and economic reforms need an owner. The Public Enterprises Ministry has appeared vulnerable after the May 8 elections as events symptomatic of political battles emerged. Without the Union Buildings staking a serious claim in the politics of economic policy, Mboweni will sound like an academic who pontificates about the way out of our economic troubles. And his paper will add to the rich history of how politics trumps common sense and public policy in our young democracy.

At least, that is the ANC’s track record over the past two decades. DM