Cash-strapped Prasa has been operating without risk insurance cover on R3bn worth of its assets for the past six months, exposing commuters to another risk calamity while executives cruise in luxurious vehicles.

The operational meltdown decimating the Passenger Rail Agency of South Africa (Prasa) continues unabated, with at least one major risk insurance house cancelling its cover to the embattled state-owned enterprise (SOE) as crime and arson take its toll on Prasa’s assets across the country. Among the assets running without insurance cover for the past six months are two new trains in the Western Cape which Prasa bought for R146-million each.

Daily Maverick can reveal that Emerald Africa, a subsidiary of JSE-listed short-term insurer Santam, has informed Prasa that it had terminated its insurance risk cover for its assets in many parts of the Western Cape and some in Pretoria, on account of the rail operator’s failure to implement risk mitigation measures since April.

In a letter to Prasa’s general manager for group insurance, Tokollo Mahlake, and to insurance provider AON South Africa, Emerald’s Mary Driscoll said: “Regrettably we are not able to provide cover for the New Trains whilst in the Western Cape.”

The letter was signed on August 23.

“Emerald and its reinsurer are unable to evaluate the increased exposure in the Western Cape due to the absence of satisfactory underwriting information regarding the security and existing fire protection at the staging yard and stations en route, as requested on 30 July 2019,” wrote Driscoll. 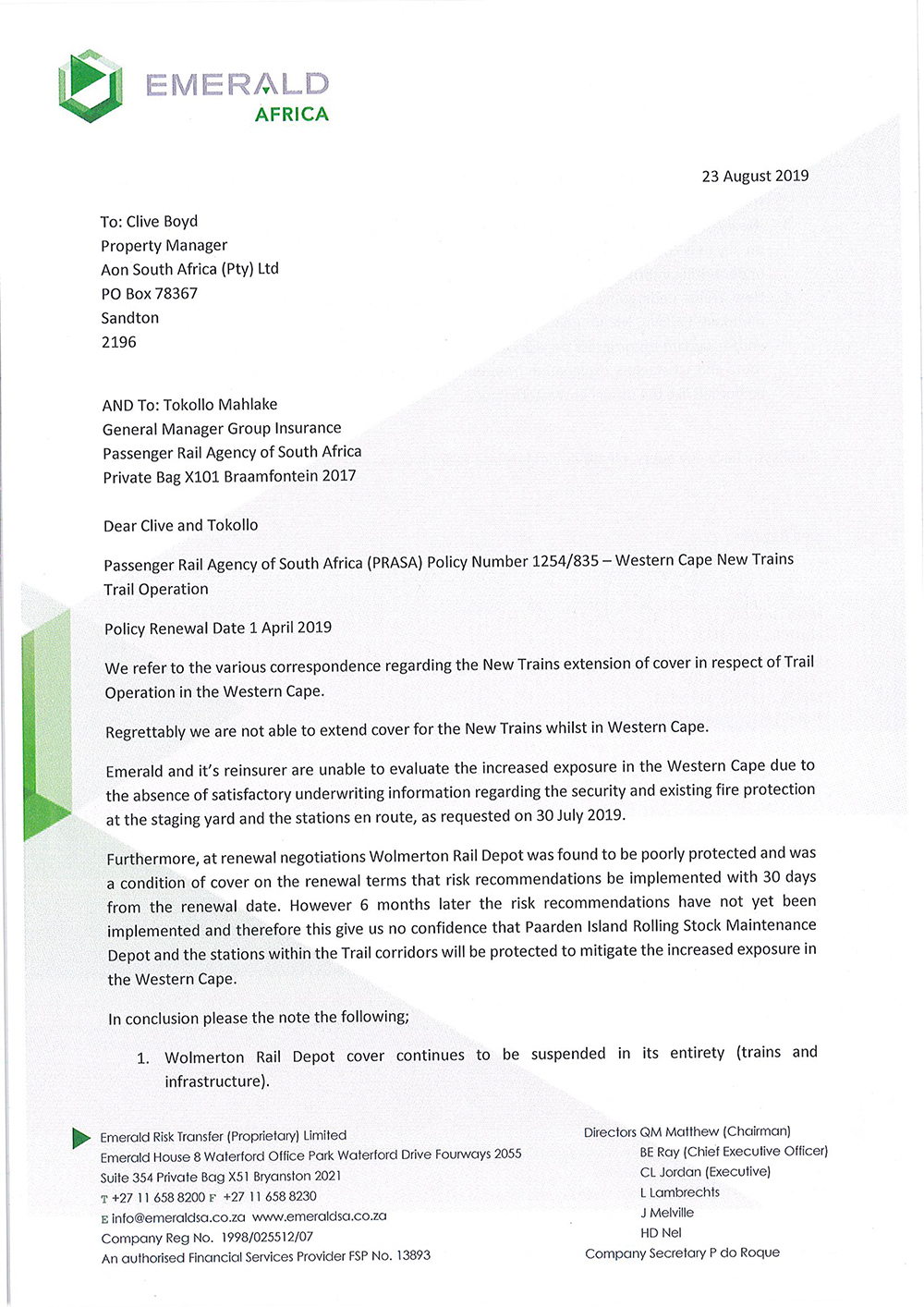 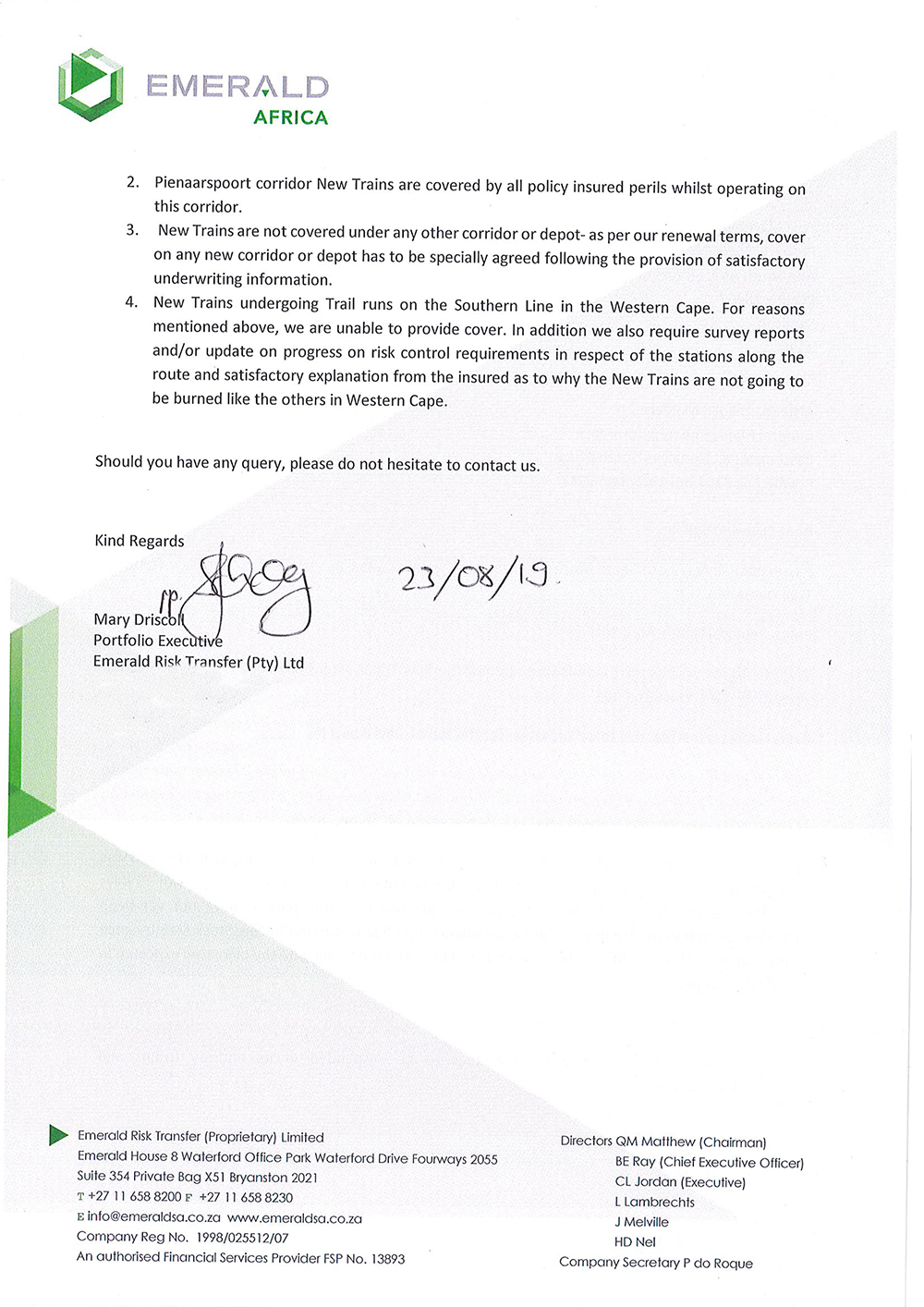 The insurance policy was supposed to be renewed on April 1, to cover Prasa’s risk insurance for its infrastructure and moveable assets for the current financial year to March 2020.

Insurance cover is a basic requirement as it serves to mitigate losses due to accidents and damage to commuters.

The lack of the essential insurance is in stark contrast to the luxury enjoyed by some executives at the head office. A planned executive junket to China was cancelled this week, after Daily Maverick questioned the composition of the delegation to a telecommunications conference, as well as the benefits to Prasa.

In August, Daily Maverick revealed how interim board chairman Khanyisile Kweyama and interim chief executive Nkosinathi Sishi enjoy being driven around by Prasa bodyguards in luxurious vehicles while commuters have to hang outside moving trains, risking limb and life to get to their places of work. The two Mercedes-Benz S600s allocated to Kweyama and Sishi each retail for R2.7-million, according to pricing information at the vehicle maker’s website.

“Prasa is currently in the process of an insurance and risk review (IRR). The organisation does not want to ventilate this process in the public domain until it is completed, as the details are complex and are likely to be misunderstood, misrepresented or miscommunicated in such a public discussion with resultant negative impacts on the process and outcomes.

“As such, Prasa shall not comment on the IRR until such time as the process has been completed. On the completion of the IRR, Prasa shall provide a statement on the process and outcomes that contains the information it is allowed to make public. It is expected that the IRR process shall be completed by the end of October 2019.”

By that time, Prasa will have operated its key assets for eight months without insurance protection. The train operator has admitted that frustrated commuters have resorted to arson and other violence to express their dissatisfaction at its shoddy service.

In July, Transport Minister Fikile Mbalula berated the train operator for meeting only 31% of its operational performance targets in the three months ended June.

In a quarterly management report seen by Daily Maverick, Prasa also said its assets had been hit by 997 incidents, mainly arson.

Most train commuters pay a month in advance for their fares, as they buy weekly and monthly tickets.

Prasa’s presentation to Parliament’s Portfolio Committee on Transport in August showed its operations have declined further, increasing the likelihood of more arson and violence against its staff and property. The on-time performance of its trains in the Western Cape has dropped to only 29%. That means 71% of all scheduled trains have failed to depart or arrive as scheduled.

Taxpayers, meanwhile continue to fork out for increasing annual operating subsidies to the train operator, which topped R5-billion in the year ended March 2018. This was against revenue of R2.4-billion.

Six months after the end of the 2019 financial year, Prasa has still not published its financial results.

The cancellation of insurance risk cover is not limited to the new trains. Emerald listed a series of Prasa’s assets that will not enjoy risk cover until Prasa implements risk mitigation measures. Those include improving security at its depots and installing fire protection measures at its staging yards and train stations.

Among the properties and assets affected are the Wolmerton Rail Depot about 30 minutes away from Prasa’s head office in Pretoria, which was found to be poorly protected during the renewal talks.

Cover will also not be provided to the Paarden Eiland Rolling Stock Maintenance Depot in Cape Town “and the stations within the Trail corridors,” said Emerald. There are at least 16 train stations on the route, bringing commuters into the Cape Town city centre from far-flung areas such as Kuils River near Stellenbosch, and Bellstar Junction in Bellville.

“For reasons mentioned above,” Emerald also declined to cover new trains undergoing trail runs on the Southern Line in the Western Cape. This area covers Khayelitsha and Mitchells Plain.

“In addition, we also require survey reports and/or updates on progress on risk control requirements in respect of the stations along the route and satisfactory explanation from the insured as to why the New Trains are not going to be burned like the others in the Western Cape,” demanded Emerald.

“Wolmerton Rail Depot cover continues to be suspended in its entirety (trains and infrastructure). New Trains are not covered under any other corridor or depot – as per our renewal terms, cover on any new corridor or depot has to be specially agreed following the provision of satisfactory underwriting information,” said Emerald.

Asked why it had cancelled the insurance cover, Emerald referred questions to its parent company Santam. Santam said it had a responsibility to protect confidential client information, and would check whether Prasa would give it permission to discuss its insurance policy. Publicly disclosing client information is prohibited by law, unless the client consents to such disclosure. At the time of writing, Santam and Prasa were still engaged in talks about Daily Maverick’s questions.

Prasa employees who spoke to Daily Maverick on condition of anonymity say the organisation has run out of money to fix the insurance risk mitigation measures raised by Emerald, and also lacks the requisite skills at management levels.

Furthermore, Prasa has been led by no less than six interim chief executives since 2015, when CEO Lucky Montana departed. The incumbent, Nkosinathi Sishi, without any railway experience, is the seventh interim chief executive. He was brought into management after the departure of Sibusiso Sibisi, who resigned in February after nine months in the position.

Sishi was in August appointed the acting chief executive of Prasa’s largest division, Metrorail, after the departure of rail veteran Dries van der Walt. He became one of more than 10 executives to leave the organisation in the past 16 months. Others have been fired, resigned or suspended in a period of remarkable instability over the past 18 months.

Prasa has also not had a properly appointed board of directors since May 2017.

Khanyisile Kweyama, also without any railway experience or any significant managerial experience anywhere, was appointed interim chairman in April 2018, to lead an interim board that has presided over this period of heightened instability and fast-declining operations.

The responsibility of appointing an appropriate board of directors rests with Mbalula, who could not say why such an appointment has still not been made.

As the operational situation continues to deteriorate at Prasa, and without any insurance cover, it may be too late to salvage South Africa’s single biggest transporter of people. DM