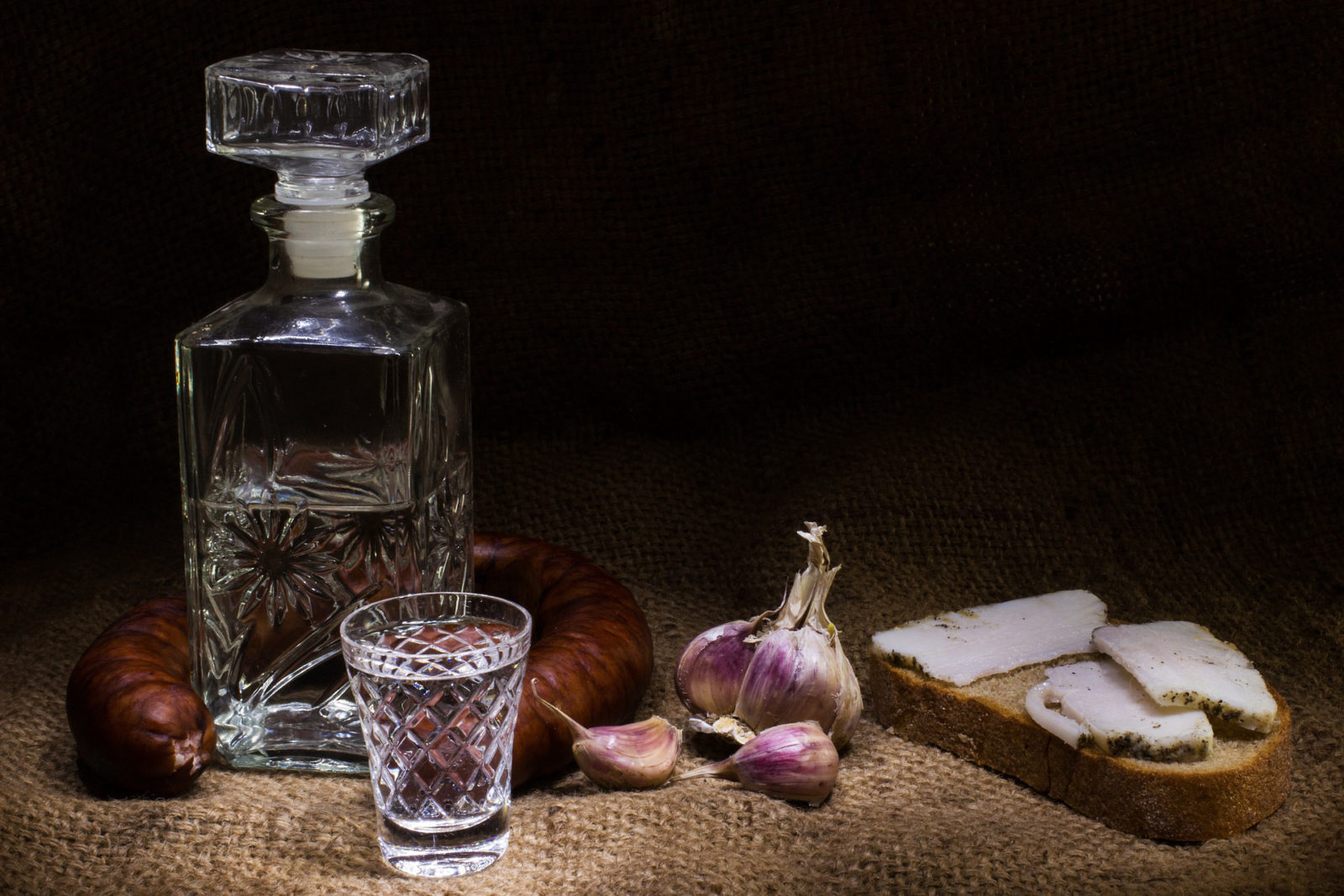 Image by Pavlofox on Pixabay

This is the tasting that surprises even the tasters, which features quite a lot of vodka really, the Istanbul skyline, little bites and yes, there’s even a bear in the story.

There are piles of awards going to South African gins, I mused, looking at the news screen. What other great South African spirits do we produce? Vodka, perchance? I don’t even really drink the stuff, or much gin for that matter, but I did just happen to know a vodka drinker who didn’t mix the drink and seemed always to be comparing imported vodkas with another vodka drinker. Perfect.

Which is how I came to be sitting in a spring courtyard, surrounded by vines just showing off their first perky lime-green leaves, gazing at a table of vodka bottles, their labels finally revealed. I was sipping a whole-chilli infused vodka from Jorgensens that had not been part of the tasting session, trying to make sense of what we’d just experienced. Was it actually an exercise in how not to conduct a vodka tasting?

There was a distinct possibility. Good name for a vodka, I thought. Distinct. Or perhaps not. (Possibility?) The stink part may not necessarily work in it its favour.

Aroma was one of the tasting categories. I’d done some research regarding categories for vodka tastings, though even “tasting” is less that than “experiencing”, unlike for wine tastings. I’d also once gleaned vodka tips and information from a Pole, which had initiated some of my curiosity about vodka. He’d surprised me by saying that aroma is one of the most important aspects of vodka drinking, that it could tell you about the vodka’s prime ingredient, that it would be more spicy when rye was the base than it would be for potato mash, not that he was at all scathing about potato mash vodka. However, he had also leeringly told me, “You can only trust a Pole when he’s standing up”.

Between the two tasters of the day, referred to here as the Sipper and the Quaffer (their names revealed, like vodka labels, at the end), the Quaffer claimed he’d never had to worry about aroma in vodka before. He’d dutifully sniffed the first of their five mystery vodkas and said he couldn’t find a damn thing anyway and gave them all a median mark to be “fair”. His vodka expertise is based on how vodka is traditionally drunk, tipped back or quaffed in one go, and what to look for then, like resultant lipfeel.

The Sipper was the taster I’d first thought of. She drinks vodka every day, in preference to any other drink, without ice and sipping it straight, “with no silly mixers, unless it’s a Bloody Mary or a martini” (wherein lies a clue as to her identity for the observant Thank God It’s Food reader). When she had entered our tasting arena, eying the decanters ready for their vodka, gleaming in the afternoon sun, she had indicated the dome and spired stoppers, “Doesn’t it look like the Istanbul skyline?”

It did. Even before the vodka.

Thanks to Quaffer, we had many small plates of zakuski, little morsels to bite between traditional vodka sips or tips. They weren’t confined to Russian morsels since the vodkas were South African. Some zakuski took the form of moist bits of biltong, snapped droëwors, stuffed peppadews and good olives. There was also salami and then, bringing up the more Baltic end, were herrings both pickled and soused, spiced and mayonnaised egg halves, even seaweed “caviar”.

I remembered we’d been scoffing these zakuski long ere I took the first decanter to the kitchen for secret pouring from the icy bottles in their black zippered bag. Was it our first mistake? Not the pouring but the snacking of zakuski before and then between tasting vodkas.

We’d even had a chat about that, some time during the process. About whether the oiliness of salami, or even biltong, could make a vodka, any drink actually, taste more acerbic and, inversely, if vinegary rollmops or peppadews make it seem more unctuous. Because mouthfeel is definitely a big thing with vodka, rather than taste. It’s what people like Sipper, Quaffer and the Pole have called grip, lipfeel, and viscosity.

Then there was that thing about evanescence and vodka, I remembered, putting my chilli-vodka aside for a moment to look at the score sheets, not that they’re going to be that useful, I realised ruefully. I know now that even the best testers can’t stick their noses into a glass and sniff it. You’re supposed to bring the glass gradually and gently towards the schnoz, being aware of any aroma. But in the courtyard, running over very recent events, I hadn’t learnt that yet.

What I did know and had caught myself doing, was that it’s not a great idea to swirl a vodka glass (unlike a wine glass and its contents) because it encourages its aroma to flee, leaving notes of ethanol. In any case, the glasses shouldn’t have been shot glasses but tulip ones to better contain the aroma, as I also only know now. When I got them, the man, knowing what I was going to use them for, had suggested dessert wine glasses instead. I’d turned those down. Pity. One of the marks for aroma given by Sipper was only one, aka Pretty Ghastly. She’d mentioned that there oughtn’t to be any evidence of ethanol in a good vodka. Hah! Had she inadvertently swirled her glass? (I wonder retrospectively.)

One of the aromas she’d liked she hadn’t known came from Hope Vodka (“citrusy” and I’d even thought “lime”) made by Hope on Hopkins, a small company specially known for their award-winning craft gins. That had a grape base, so who knows? Our sample of Hope hadn’t arrived, sold out and in the process of changing packaging, so we had about a quarter of a bottle that had pretty much been purloined in the night, by their “Joburg man” who, after phoning all the trendy bars in Joburg, found Publik in Bolton Road had a little bit, the emphasis being on “had”. He’d delivered it to me in a plain wrapper the very morning of our tasting.

Though I’d had a bit of long-prior info from the Pole, when the pure (as opposed to the chilli-infused one) Primitiv vodka from Jorgensens was poured, I had actually detected an ephemeral whiff of naartjies. The Pole had said that wheat vodkas often smelled of citrus for some reason. This vodka is distilled from spelt grown in the Cederberg. Perhaps he was to be trusted.

He’d claimed Polish origins for vodka, not surprisingly, but maybe he was right there too. A small town, once a big trading centre in the Middle Ages, called Sandomierz, is thought to be the place where vodka was first distilled from dark grain, probably rye. Many peoples, including Russian ones, had been boiling up wines and other existing drinks as a kind of distillation and the Swedes would later distil a vodka made of paper-mill residue, proving that you can distil a vodka from anything that can be fermented, if nothing delightful about the resultant liquor.

By the way, a snippet of new knowledge is that adding a quarter ratio of water to vodka releases the aroma well. Okay, we hadn’t known that on the day and I don’t know what Sipper and Quaffer would have said to such dilution.

But I’ve also since learned that icing vodka is no way to test it. The Pole was dead wrong there. He even used to ice whole buckets of water with the bottle inside, so that a big lump of ice with a bottle sticking out of it was put onto a tray on the table when he served it. But then he had also once told me that he’d made a machine to compact locusts so that the African continent could have access to his blocks of protein.

While Sipper and Quaffer debated the outcome of the tasting on the other side of the bank of bottles, not far from what was left of the Istanbul Skyline, I poured myself just a bit more of the chilli infusion. The woman who had sent it up from the farm along with the Primitiv had warned me of its heat and suggested I do what she and “the others” had done to make it more palatable. They had paired it with Sparletta Strawberry.

Perhaps that’s one reason why I came to two major decisions, shot-glass in hand in the courtyard. One was that everyone has their own way of judging our South African vodkas, of which 031 has scored a Silver Michelangelo award for their sugarcane molasses-based vodka and is 10 times distilled, two things of which the Pole would have disapproved – more than about four distillations he deemed ridiculous for wrecking the “texture”. And that vodka aroma is a quick, evanescent thing. I had begun to like the word “evanescence” the longer I spent with my chilli-infusion.

I heard Sipper, whose real name is Gwynne Conlyn, say to Quaffer, who is really called Mark Eardley (and you can read his story about zakuski somewhere nearby), that the great surprises evident on their marking sheets, one of which bore a small but distinct helping of soused herring, “was all because of the zakuski”.

But, for the Pole and, indeed, for myself in the courtyard, with vodka there seemed to be two ways of seeing everything.

There are more than five South African vodkas. The choice was based on the companies having some way of contacting them, even an answered phone. Since then, I’ve discovered two more. Ours were: O31 Vodka, Hope Small Batch Vodka, Russian Bear Premium Original, Jorgensen’s Primitiv Vodka and Gr8dient Premium Vodka. DM